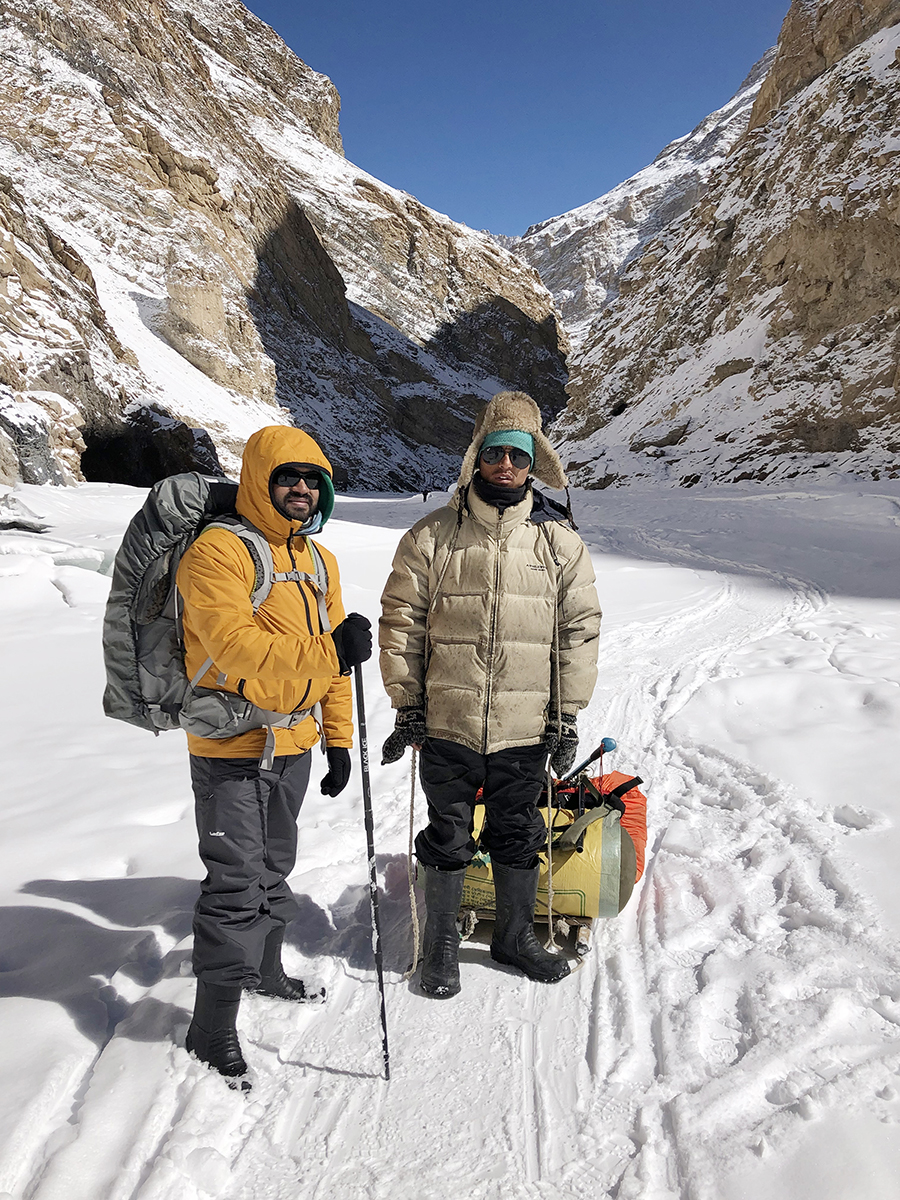 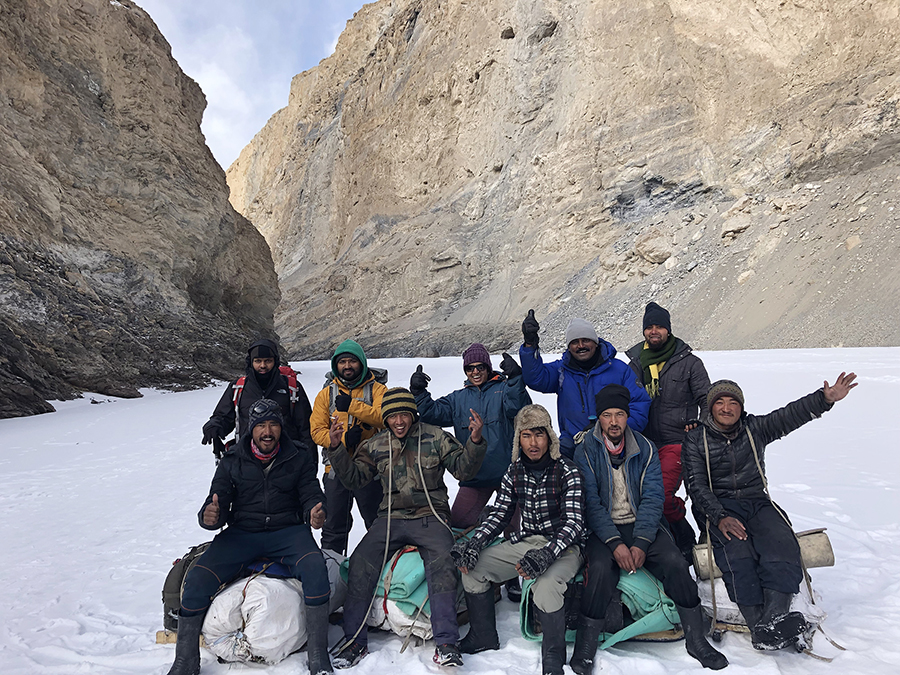 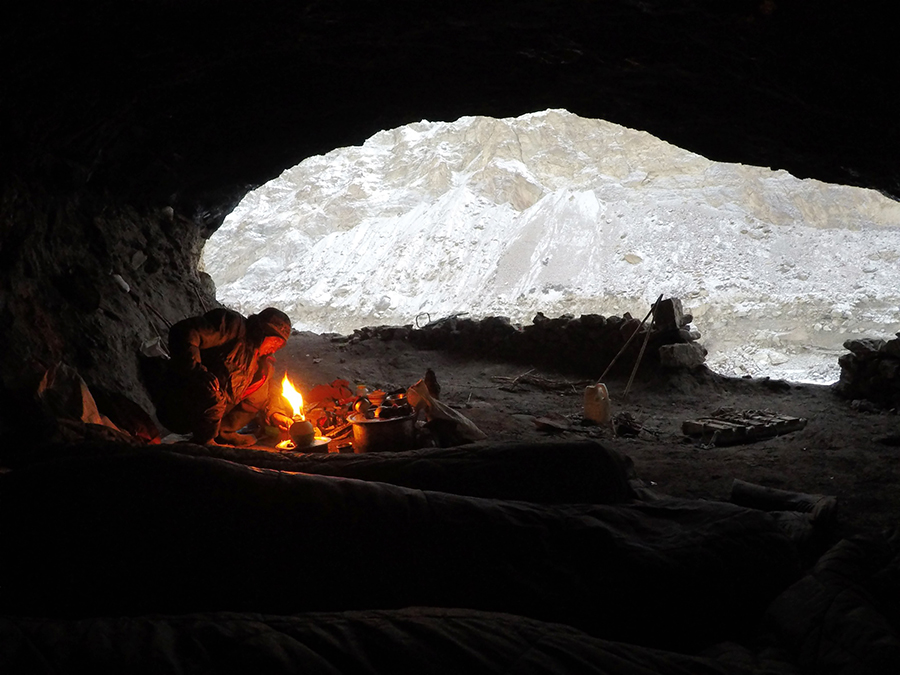 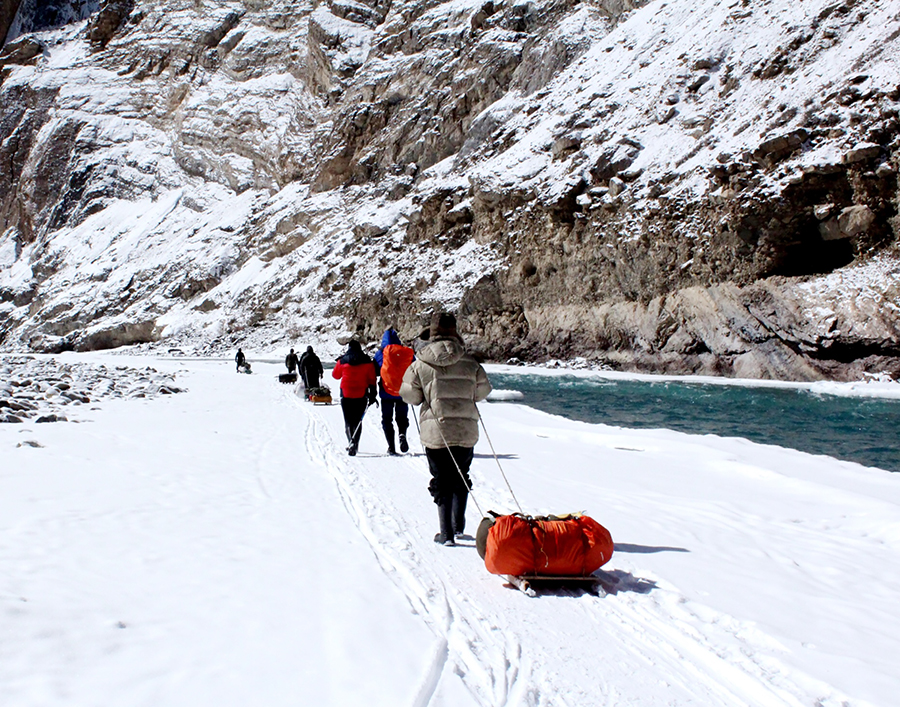 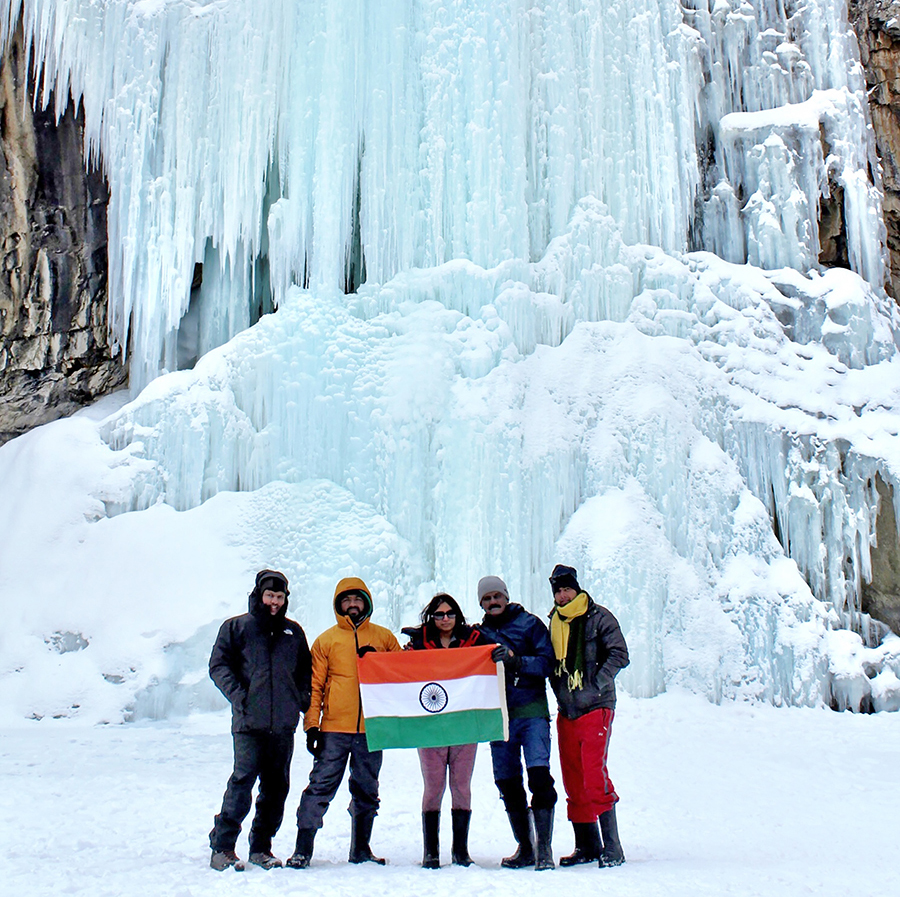 For centuries people of the Zanskar Valley have used the Zanskar River during winters months as a highway. As crazy as it may sound, during the peak winters, the Zanskar River is covered with 5-6ft of thick ice sheet. It is strong enough to be a winter highway for villagers to walk and pull their sledges. This route is mostly used to reach Leh, a major city in the Ladakh region in India. This ancient route now offers a perfect place for hikers looking for a challenging yet amazing trek.

This trek is open only during a short window of 50-60 days in January/February. The starting point for this trek is Leh city which can only be reached via a flight from Delhi, as all the roads are closed due to bad weather during these months.

Casualties have increased in last few years due to unpreparedness of the hikers so the local administration now requires people to stay at least 3 days in the city for acclimatization and only then the permits are issued. Leh city is at an altitude of roughly 3500 metres and is surrounded by rugged mountains where nothing grows. The daytime temperature is usually around minus 5-6 degrees and night time temperatures can go down to minus 15 degrees. This place is still warmer compared to the Chadder Trek. Hikers have to battle minus 8-10 during day and up to minus 20 in the nights. Did I mention that this hike is not for the newbies? The thin air and extreme temperature slow the acclimatisation process which make it even tougher for seasoned hikers.

Our trek was for 5 days on the Chadder after the 3 days acclimatisation stay. On the first day in Leh, almost everyone in the group experienced mountain sickness in some form or the other – headache, nausea, loss of appetite etc. Thankfully nothing serious happened but some were still feeling clumsy on the third day when we had to undergo a basic medical test to get the trek permit.

After a short but bumpy 2 hours bus ride, our expedition team of 5 hikers, one guide and 4 porters were dropped off at the starting point. Weather welcomed us with fresh snow, dropping the visibility to just a few metres. The porters quickly prepared their sledges and we were on our way with our heavy backpacks. The river is an amazing marvel of nature, completely frozen end to end from the canyon walls. Although at a lower altitude than Leh city, the place was colder than we had expected.

Day 1 was rather short and we reached our first campsite in just 3 hours. The hike is relatively flat and easy, it’s the extreme temperatures and slippery ice sheet that makes it challenging. Our porters who are used to this place, reached the site ahead of us and had everything ready when we arrived. One of the benefits of hiking in India is that you get a warm 3-course buffet even in such remote camps. Compared to my hikes in other parts of the world, where one has to be satisfied with sandwiches during day & quick dinners, this was a five-star treatment.

By the end of Day 2 and Day 3 the temperatures had dropped even further and everything in our backpacks had started freezing – fruits, toothpaste, creams, everything. We were walking roughly 5-6 hours every day and the scenery was changing by the hour. The frozen river revealed itself at some points and then disappeared again under the ice sheet. The current was strong and the sight was beautiful yet terrifying. Imagine walking on the frozen river, not knowing how thick the sheet was. The fresh snow had made it near impossible to differentiate between the strong and the weak sections of the river. Just one slip and we would disappear under the ice sheet with no hope of rescue. Strong currents and the thick ice sheet make all rescue attempts difficult. You have to trust your guide and walk behind him, any cowboying in this region may cost your life. It was good to have the porters ahead of us and we just followed their tracks on the river. These locals are highly aware of the region.

Mornings and evenings were the coldest and we remained tucked in our tents then. The inside of the tent developed a thin frost layer by morning and everything inside got wet. This made starting the day very tough but we were saving time as there was no brushing teeth, bathing or even proper face washes. Even the wet wipes were frozen. We got a bottle of hot water from the kitchen tent to freshen up and then we would start our day. Any water drops that fell on our jacket froze in seconds.

The river goes on and on, but most hikers return from a point called ‘Nerak’. It has a beautiful frozen waterfall and the place looks out of this world. The location and strong winds in the area make it the coldest point of the trek. It was hard to breath and I could barely feel my limbs under the four warm layers. My nose had turned permanently red during this trek and was now sore & beginning to develop cracks.

Day 4 was the toughest, the backpack was feeling heavier with exhaustion and limited sleep. We couldn’t pitch our tents today because of the strong winds and decided to sleep in a nearby cave. Surprisingly, the locals have been using these caves for ages as shelter from the elements. I was a bit nervous at the beginning from the idea of sleeping inside the cave when the temperatures drop to minus 15-20. When we reached the cave, we found a family of five with 3 little kids cooking their dinner. Looking at the children I was a bit at ease. If they can do it, so can I. One would be surprised by the hardships and simplicity of their lives, still you would find them to be the nicest and most hospitable people. I had the best sleep of my trek in that cave (we were using military grade sleeping bags). I woke up as strong as a Yak.

The family remained tucked in their worn-out blankets but the father lit a small fire and made some fresh coffee. Even though they had very little for themselves, they offered me a cup. Lucky me, others from my group were still asleep and it was too cold to refuse the generosity. We invited the family to our camp and had our breakfast together. We crossed the family a few more times as we were headed in the same direction and were greeted with smiles & giggles.

After a few hours of hike, we had arrived at our final camp site, much earlier than we had to be. It called for celebration! Local beats and folk songs, our porters turned out to be great singers, the perfect way to close the night. The porters tied a small colourful prayer cloth to our jackets as respect and for safely completing the hike. We were all nothing but impressed by their skills, simplicity and warmth throughout this trip. Upon reaching the guest house in the city, we experienced the season’s heaviest snowfall and had to walk everywhere in 3ft snow.

Great post hike experience I must say. Chadder Trek is one of the best hikes India has to offer and you must try it while it’s there. Global warming is melting the sheet a lot sooner and making the weather more unpredictable. ■