On the 2nd of February 2017, as scheduled, member of the Pathfinders; Benhor, Ken, Rina & Brix climbed Jebel Jais Mountain to find a good route to train their new members. Having climbed with them before, although not a member, I was invited along with Alfred, an avid cyclist and outdoors person. 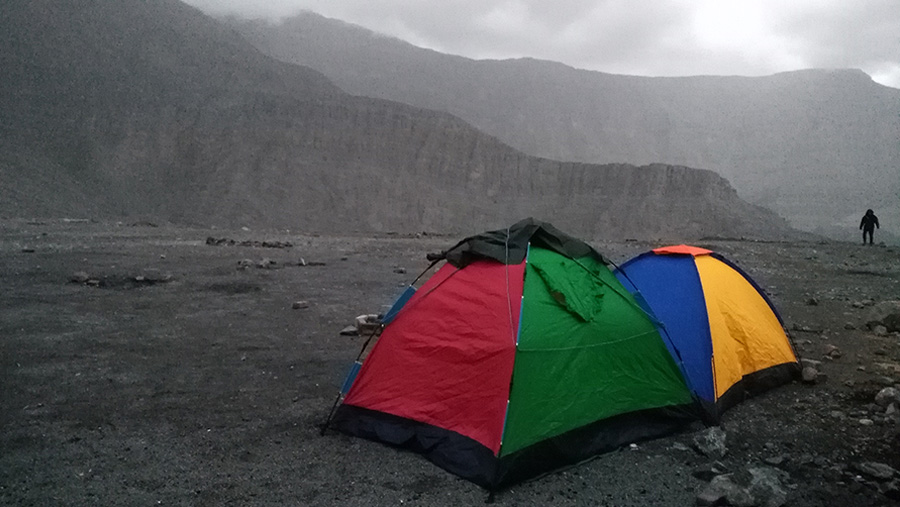 We camped and it rained 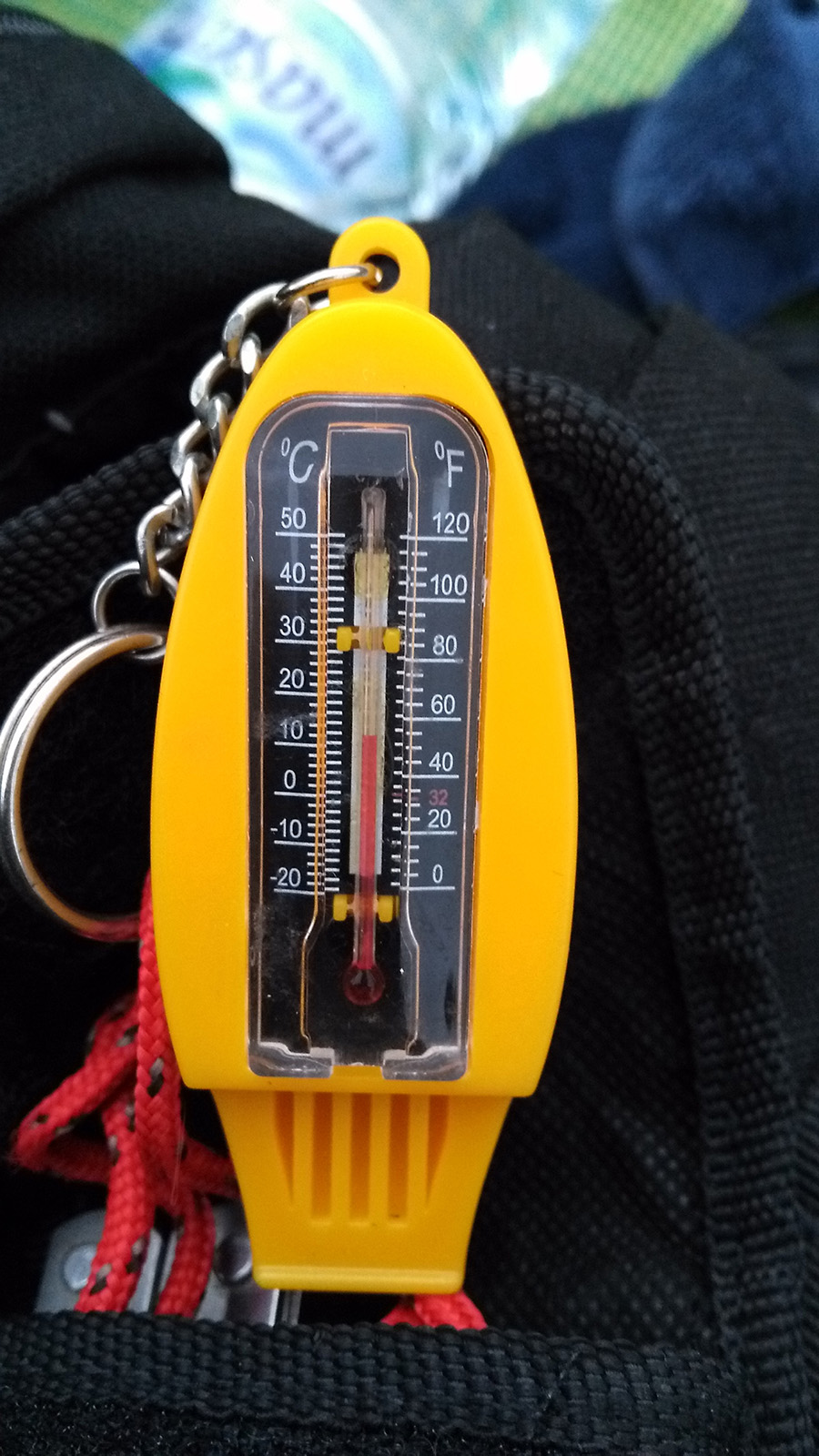 Its 12 degrees inside the tent

There was a forecast of cold weather but since it was fine the whole day of the 1st, it was decided to continue as planned. Little did we know, that was the calm before the storm. 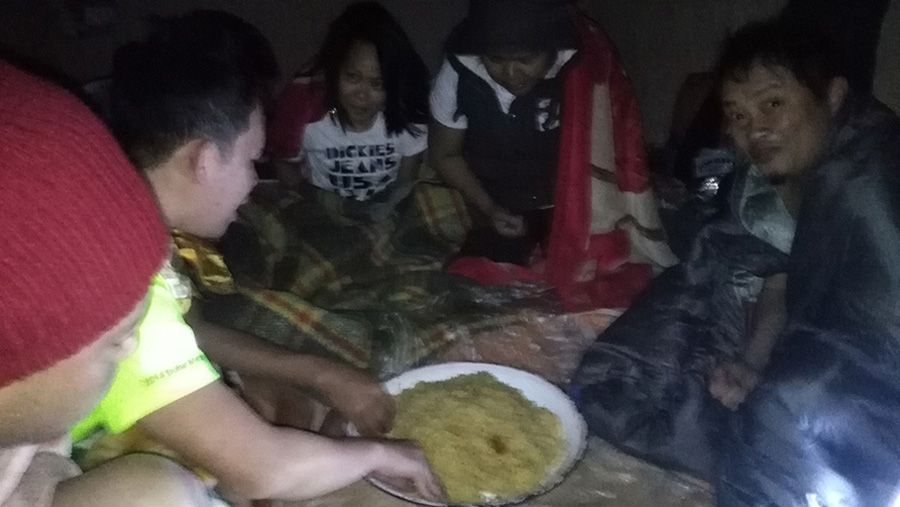 We were still feeling cold as we eat 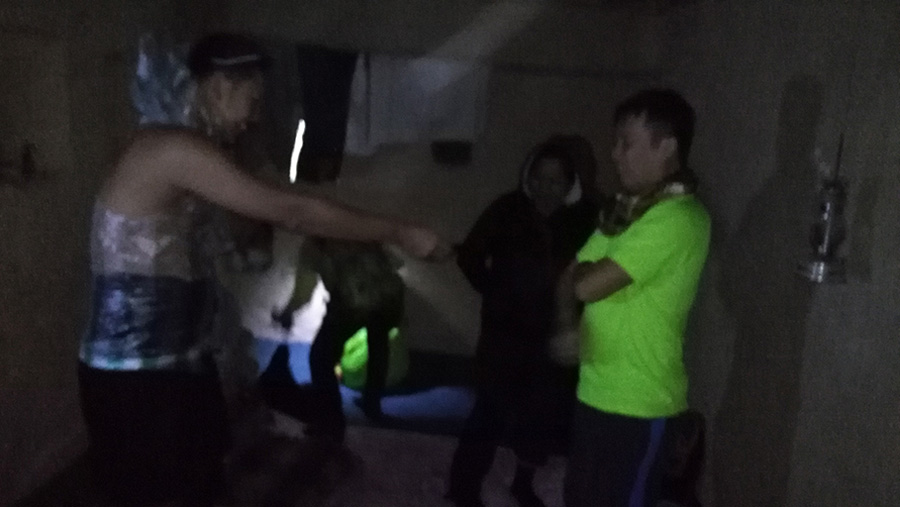 Right after work, we all went home just to get our packs and meet with the transportation. It took a few hours to get there and as we travel, the weather slowly deteriorates. By the time we got to the campsite it was raining on and off accompanied by gusty winds. We camped, all anticipating the climb the next day, it was hard to sleep. Add the cold, rain and winds pelting our frail covers – it was something just shy of a nightmare.

“Where I am standing when I took this photo is a rock wall that protects these two tents from the wind. On the distance was a team member foraging for wood to burn. To the left not visible in the photo is the van and the other tents”

Morning came and we went down to the Wadi where the trail begins. It was a good day. The rain has stopped and although it was cold, we expect the weather to warm-up as the sun rises. After a light meal and few photos we proceeded to hike.

“A selfie before the climb R-L Evelyn, Rina, Brixs, Ken, Alfred, Benhor & me” 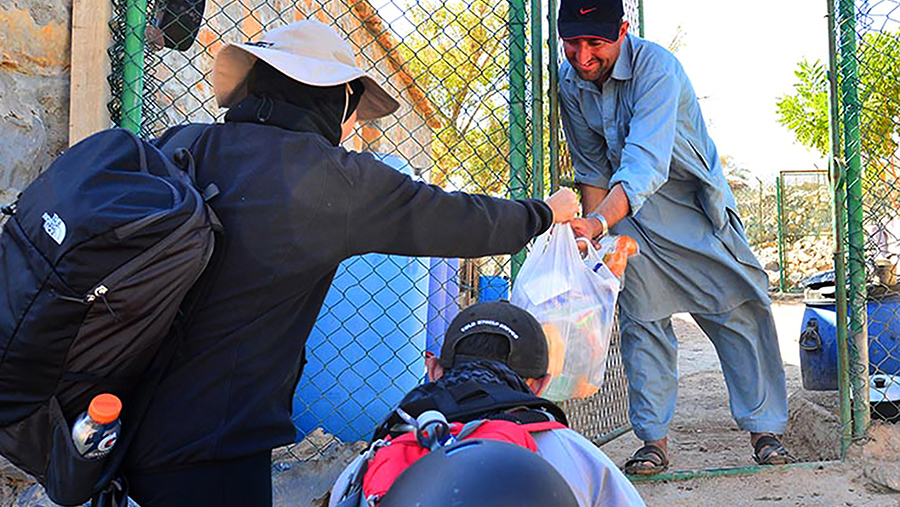 Initially, going up was a good exercise. What we did not know is that we were climbing the hard route. There was an easier trail to our left but since the trail was not clearly marked, we missed it. They were like happy goats climbing each boulder with finesse and glee, I on the other hand was struggling. I am an avid climber in my youth, but age and lack of exercise have taken its toll. During the discussion, it was supposed to be a short hike but now it is clear to me that it would take the whole day.

I was softly blaming myself for not having the right equipment. Aside from what I was wearing, all I had was a digital camera, lenses, a cellphone, water, a few snack bars, sprain wrap and a knife all crammed inside a sling bag. As the climb turns into a hands and knees affair, the sling bag became trouble as it would always shift taking my balance away. Seeing my trouble, Brix took the bag and shove it inside his own backpack. 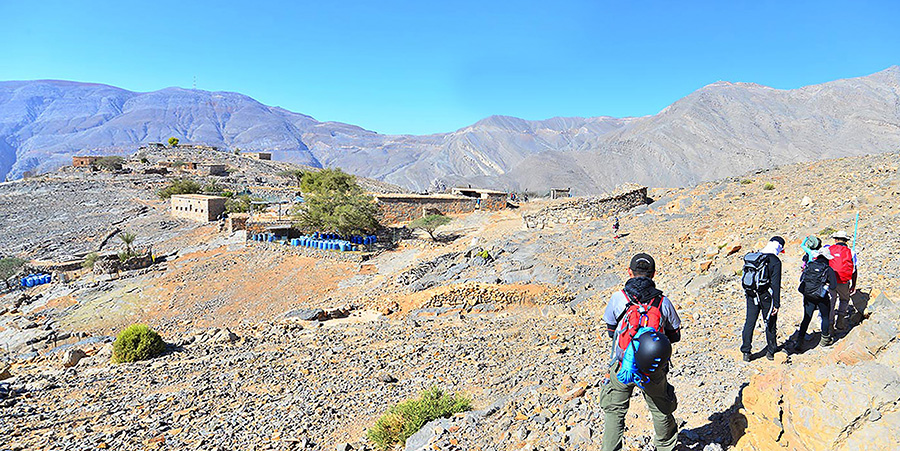 Arriving at the Shephereds place

As we near the top, we were overwhelmed with bad weather. Initially it was just a light hail storm, almost like snow. Too far to turn back, we pushed on. Some of the team played with the falling ice. Then hail, freezing rain and strong winds tag teamed and pelted us just before we reached the highest point. What started as a fun climb became a fight for survival. The temperature was so cold my mobile phone’s screen went black and the rain made the digital camera unusable. In trying to find a faster route, Ken disregarded the GPS. Without GPS and maps rendered useless by the blinding sleet, we got lost and found ourselves traversing a very deep cliff. Add to that the beginning of hypothermia, some of us were acting irrational. Rina sat beside a big rock saying that the winds were too strong for her. As we stopped to assess and fix the situation, we got left behind because Ken & Ben forged further ahead.

My body may be weak, but my mind was racing. Experience kicked in and I started to herd the team, forcing the tail to find its head. With the team leader too far ahead, I became the bridge keeping both ends connected and under a small tree with no effective protection from the elements, we finally coalesce to move as one. In Evelyn’s words: “As the hail is still strongly beating us, we shielded ourselves under a tree and we stood circled together like the penguins but it didn’t help. Our trek leader, Ken is walking around finding safe passage down the next way point which is the shelter of the shepherds. The farm house is the last point to walk down to our base camp but before we reach the farm house, we still have to pass a cliff and the rocks are getting slippery with our freezing wet clothes”. 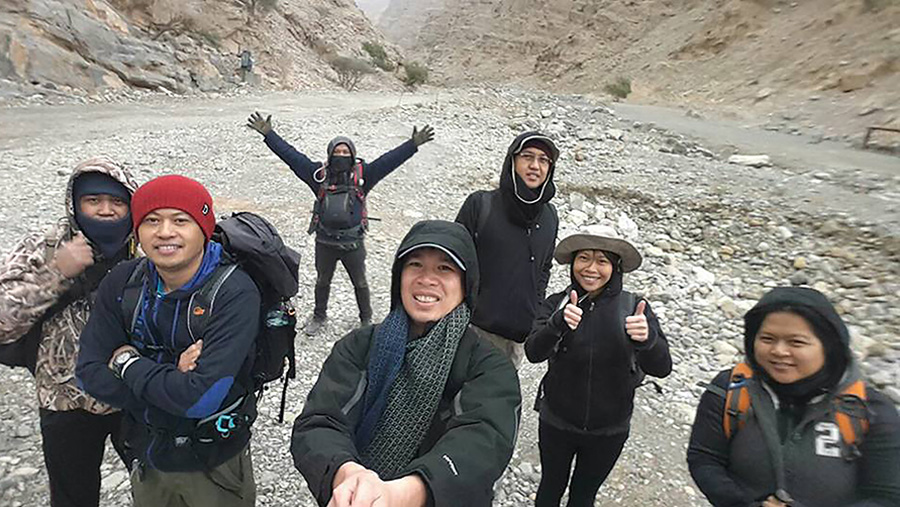 Pushing on we reached the shepherds’ home and sheltered there till past 2pm. We rested and tried to wait the weather out. Everyone was cold and hungry. Rina even said that we move ahead and leave her there.

The Pakistani shepherds asked us to stay, having asked a few other who came before us but after some discussions we all voted to push forward as not doing so means staying in cold wet clothes or traveling deep into the night with two flashlights between us seven.

It was the wrong decision. We have not gone far when the strongest part of the storm arrived and hit us again. We tried to shelter in a nearby hut but upon entering we found it has no roof. It was then decided that we all turn back to the safety of the shepherd’s home. Like a zombie movie, some entered a survival mode of everyone for himself, it could be hypothermia. We got left behind again.

Brix who was helping me carry gear collapsed from the cold, his strength ebbing away. It was my turn to return the favor. Drawing inner strength from years of martial arts training and the help of Alfred – the smallest person in the group, we carried him back to the shepherds’ hut. Upon reaching safety I counted the team and found Benhor to be missing. Inquiries did not produce a positive result so after giving instructions to them to stand together on the farthest corner of the balcony to help conserve heat, I left and proceeded back to the storm to retrace our steps and find our missing member.

My mind was running scenarios I do not want to happen. We already carried one back, I do not want to tell his wife he is gone. We have whistles and code but I cannot use it as it would mean I was the one in trouble and will bring the other to me. Instead the wind drowned my voice in the snowy rain. After a fruitless search I returned and behold he was there. What we did not know is that upon reaching the hut, he searched for the shepherds and asked them for help. I breathed a sigh of relief. 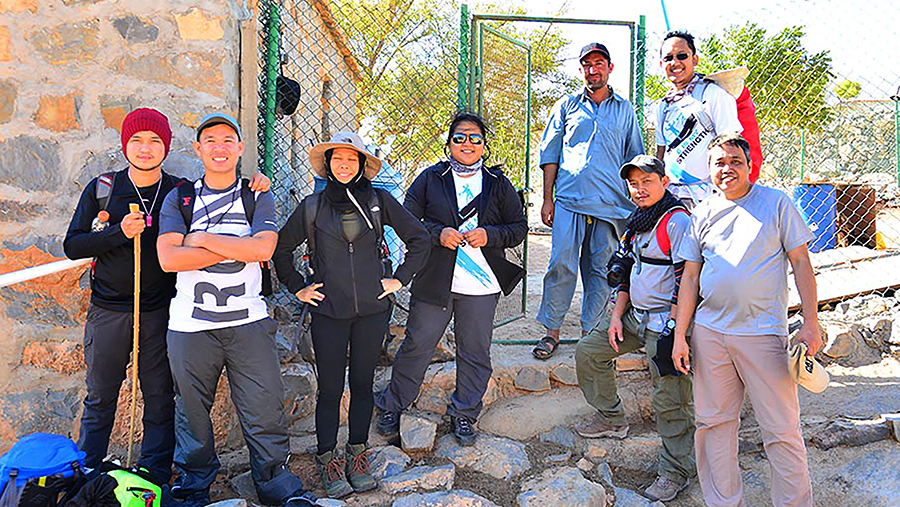 The shepherds: Jaid & Shabir were very accommodating and kind. They built a fire to which we crowd around till our clothes started smoking. Then they have us stay the night on dry beds, warm blankets and hot food.

“They gave each one of us beddings and warm blankets”

“They also served us food”

They hardly understand English, knew nothing of us but the bond of humanity was strong in them. Jebel Jais conquered us, we gained new friends and deeper respect for other cultures and nature’s wrath. 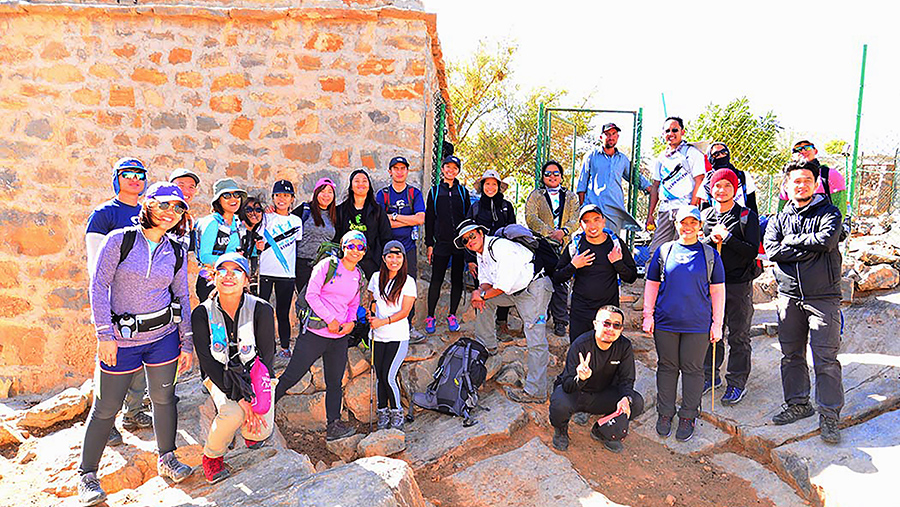 Other climbers that joined the second climb

A year later, we returned to pay homage and thanks, bringing petty gifts against their gift of life. Near the last leg of the journey as the sun goes down on the horizon and we walked home from another adventure, I paused in retrospect and took a picture. A memory, that forever I can share what I carry in my heart.
The picture I took on our long walk home.

A small reunion of friendships cast on fire and ice with new pathfinders of the road less travelled. ■