Carstensz Pyramid is a mountain that stands 4,884m above sea level. It is located in the Sudirman Range of the western central highlands of Papua Province, Indonesia. It is considered one of the 7 summits as it is presented as the highest mountain in Oceania. It is located in a very remote area which makes it very difficult to reach, however, there is the option to go by helicopter to avoid going through the jungle and disturbing the tribes, making the trip safer. 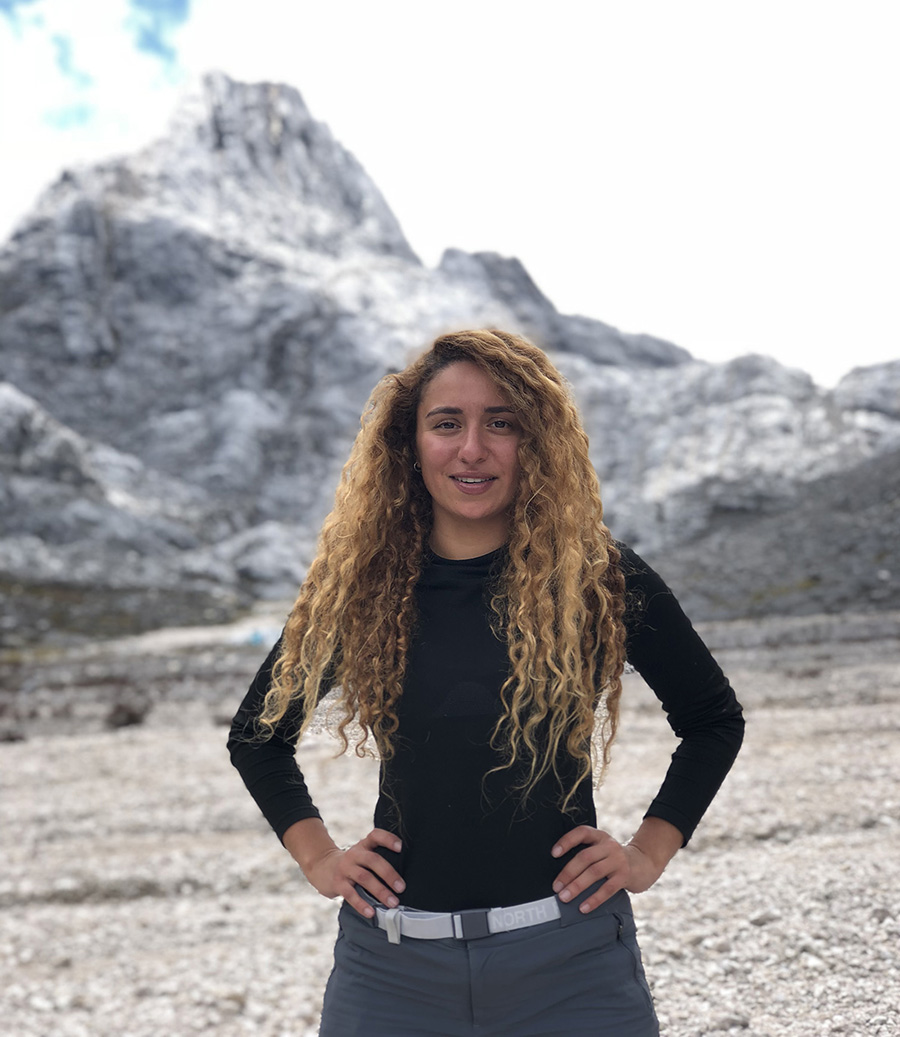 Currently, there is a major conflict between the tribes causing a war in the jungle. On top of that, tribes would ask for money to allow climbers to pass from an area to another. Sometimes they would decide to kill the person they are dealing with if they are not happy with what’s being offered. After hearing about all those stories, I decided to take the helicopter to reduce the risks. 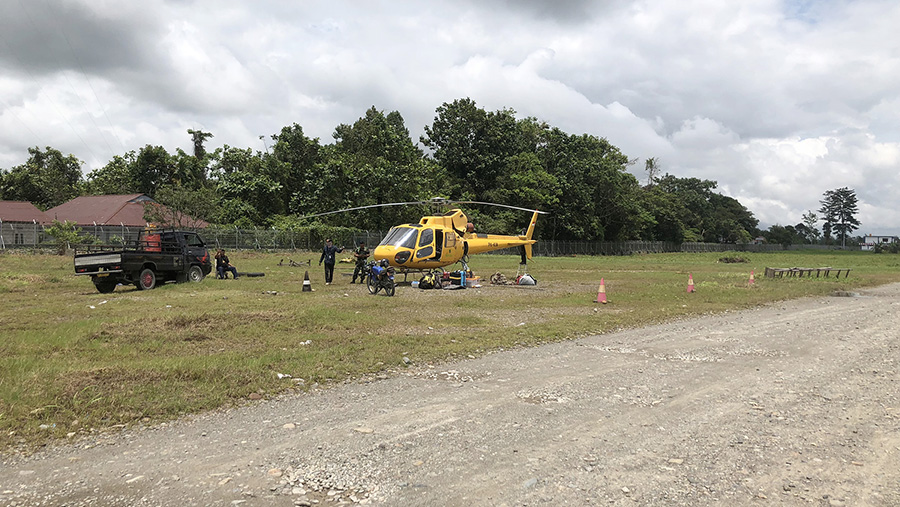 My trip started on the 2nd of October where I arrived in a city in Indonesia called Timika. The city is so small that its population doesn’t exceed 150,000 people! I was told that it wouldn’t be safe to take a tour in the city so I spent my day inside the hotel waiting for the expedition to start. After meeting the local guides, I was told that the weather in Papua is very unstable which makes it difficult for the helicopter to fly from the city to Yellow Valley that is, the basecamp. We all hoped for good whether that day, packed our bags and went to get some rest. 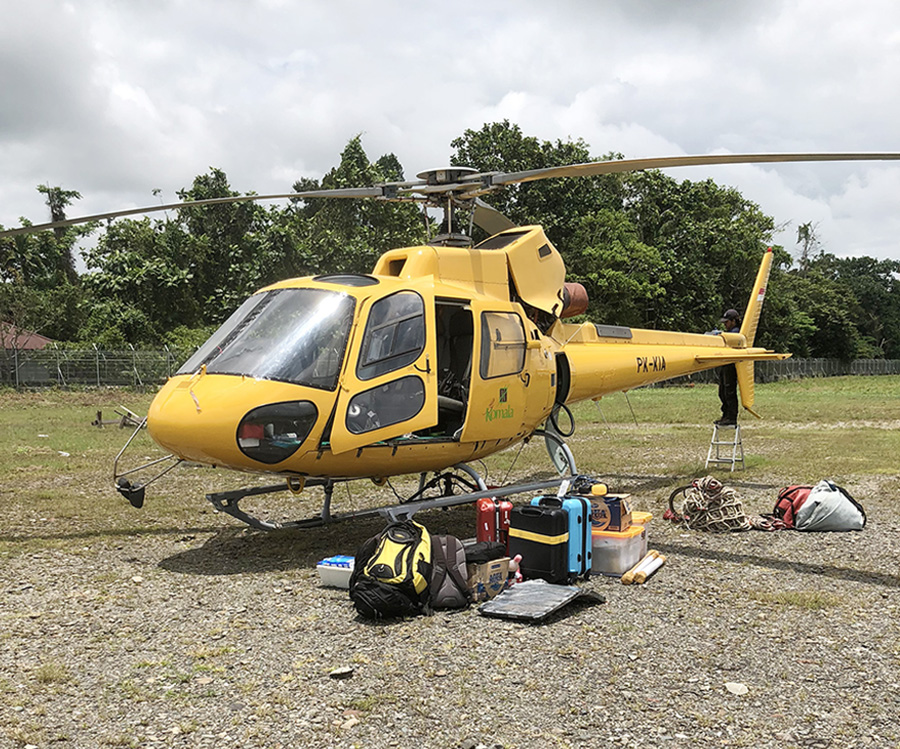 We woke up the next morning at 5:00 am and headed to the local airport to take the helicopter. We waited till 10:00 am and had to go back to the hotel because basecamp was covered with clouds which made it impossible for the helicopter to land. 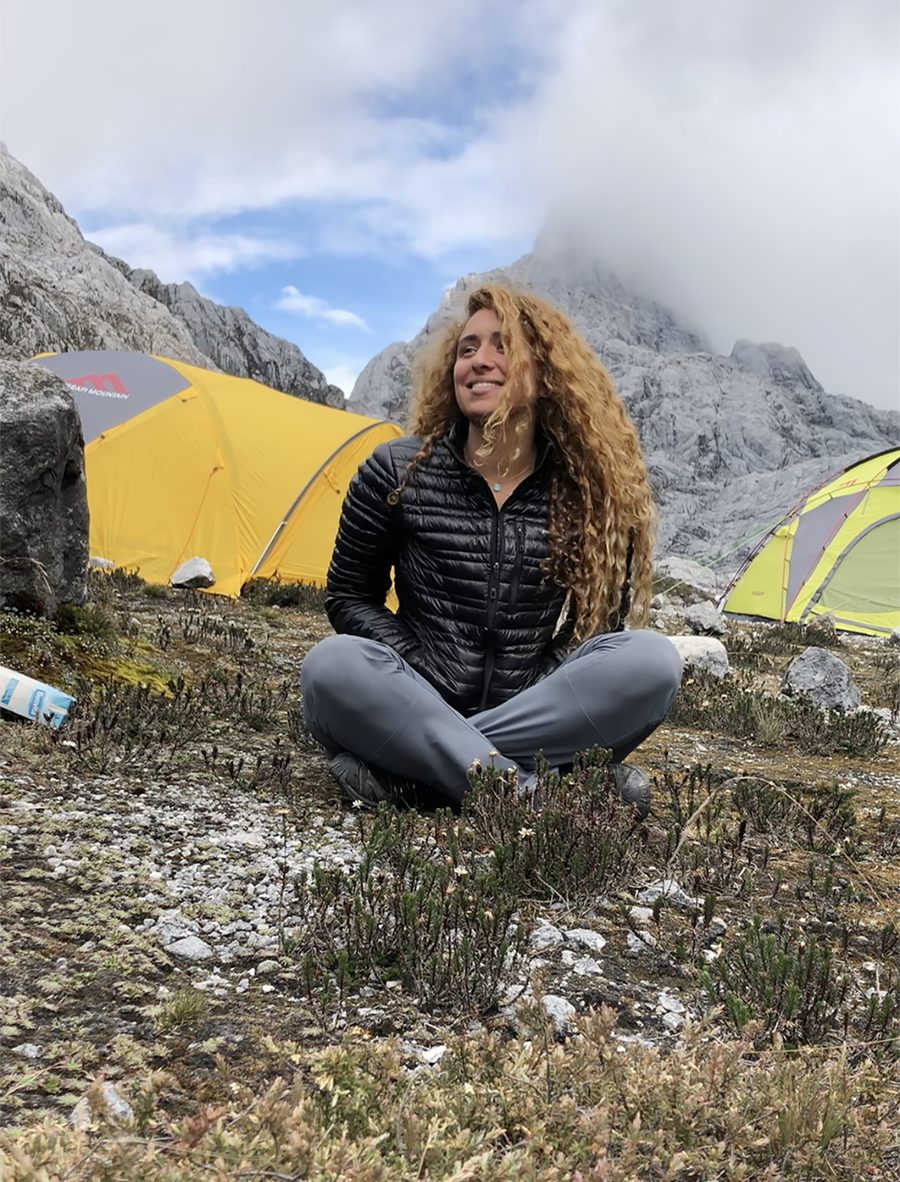 I was waiting another day at the hotel hoping that the next day would be a good one to fly out. We woke up again the next morning at 5:00 am, the same routine waited till 10:00 am and again, there was no chance for the helicopter to fly out because this time the clouds covered the city which made it difficult for the helicopter to fly through. I was getting fed up, stuck at the hotel in the middle of nowhere waiting for good weather to do what I was there to do, CLIMB! 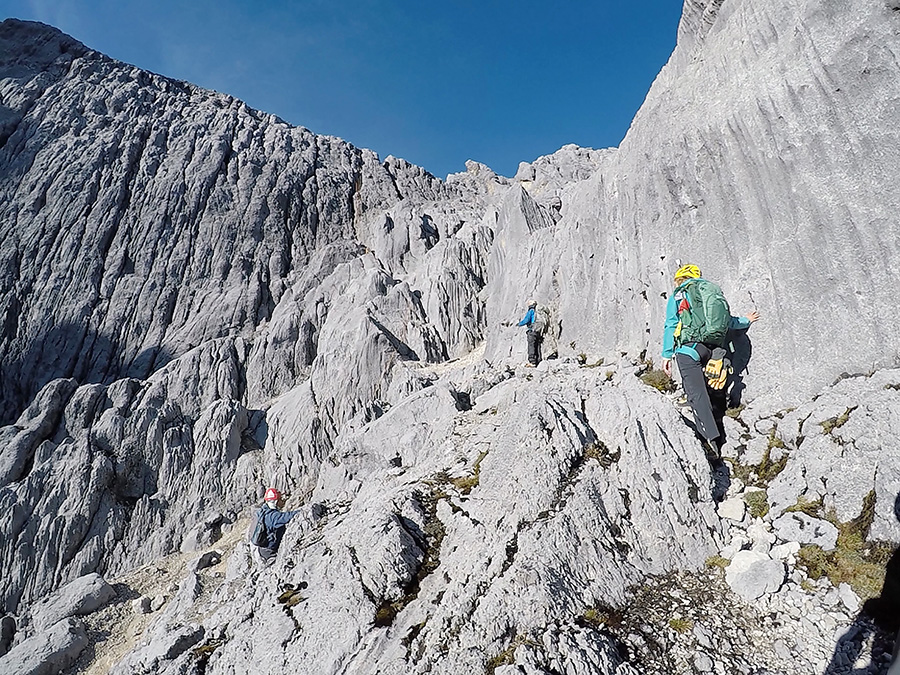 Next morning, same routine but this time with lower energy just hoping the weather is good. At 8:00 am we hear our guides speaking loudly, WE ARE GOING TO FLY! My teammates and I rushed to the helicopter and the stress was all gone. The ride was about 30 minutes and everyone was super excited.

We landed in basecamp safely and set up our tents with the kitchen tent, boiled some water while the guides prepared a nice meal. Basecamp is located at an altitude of 4,200m so everyone’s concern was how to avoid altitude sickness because we did not acclimatize to be on such an altitude. Fortunately, everyone was drinking plenty of water and no one felt sick. Later that day we went to do some training on the ropes to get an idea of how the mountain is. We had plenty of fun rock climbing and rappelling. After completing our training, we had dinner at 6:00 pm and decided that we will start the summit push at 3:00 am in the morning. I went to my tent, prepared myself for summit day by packing my stuff and putting all my layers on. It was difficult for me to sleep because of the altitude and the excitement so, I ended up listening to music all night, stargazing, and taking water in and out. By 1:00 am I finally fell asleep, it was more like a power nap. 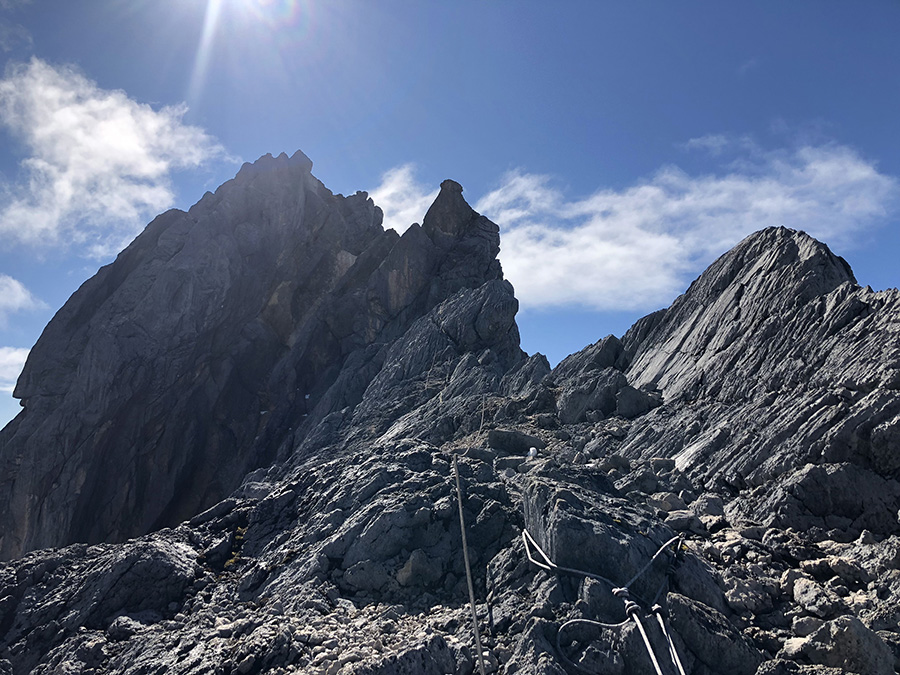 An hour later, 2:00 am I was awake, energetic and hungry. We all gathered at the kitchen tent and made some breakfast which was basically crackers, cheese and some tea. It was a little cold, we put all our layers on and geared up with our climbing gear. It was a beautiful night with the moon lighting our way.

We got to the first fixed rope after 15 minutes and the climb really started. We had to ascend around 680m to the summit while rock scrambling and rock climbing. We were on the fixed ropes throughout the way using both our hand and the jumar/ascender to get to the top. It was still very dark, I could barely see where my hands are gripping but I kept going. At one point we had to climb through a crack in the mountain that was around 70m. It was a lot of fun but with that altitude it was challenging. By 6:00 am the view started to change, the sun was coming up and we could see the beautiful landscape around us from an elevation of 4,500m.
I was starting to get sleepy, I couldn’t stop yawning so I decide to put some music on and focus on my steps. We had a funny group so my breath was taken away by laughter but this created the positive vibes that kept everyone going and feeling good. 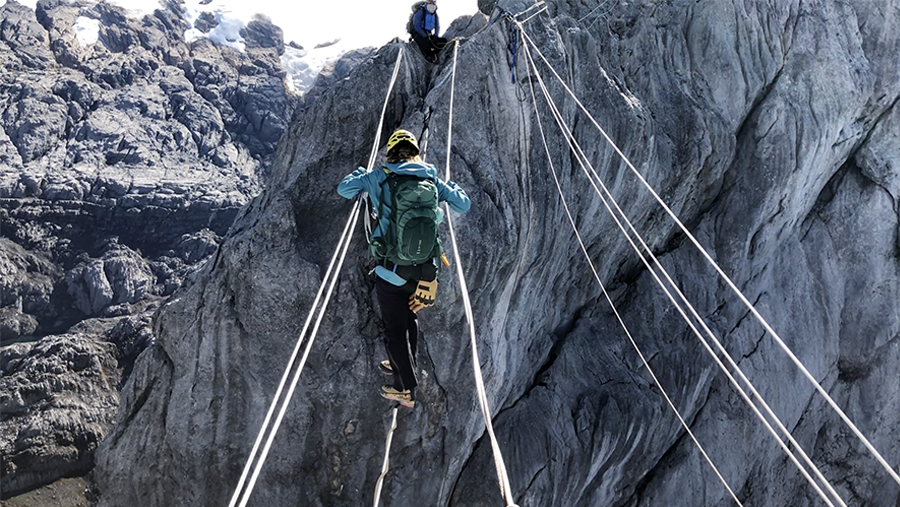 Finally, we reached to the famous bridge of Casrtensz Pyramid that everyone talks about. I was no longer sleepy at all after seeing how I am supposed to cross it. Basically, there was 3 ropes knotted between 2 parts of the mountain. First rope is the one we had to walk on and the other two ropes are the support where we lock our carabiners through the cowstail from our harnesses and of course use our hands to keep the balance. I was excited to try it but the moment I stepped on the rope my breath became heavy. There was a 200m downfall under me. My main focus was on every step I took on the rope and keeping the balance. After making it to the other side, the first thing I thought about was…I’m going to down the same way!

After some time we were only 20m away from the summit, the way was still a little technical until we saw the summit sign. This was the moment of happiness, I completely forgot all the helicopter issues. I was not tired at all because I also forgot how I climbed up to the top. It was the 6th of October, 9:00 am in the morning, standing on the top of Oceania with beautiful views around. It was a magical moment, we took plenty of photos and went back down to basecamp. 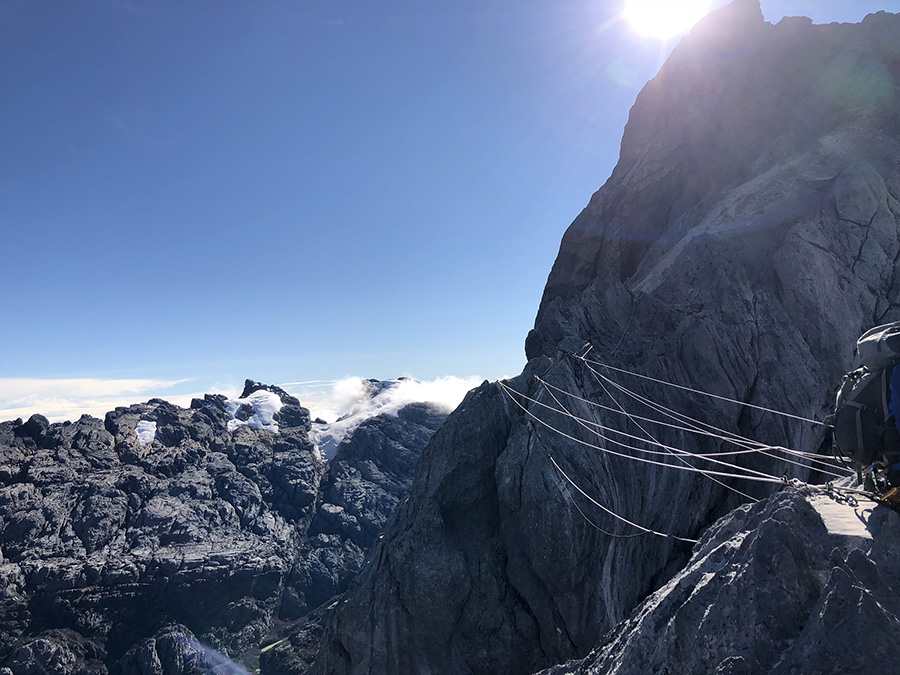 We got to our tents and had some rest and gathered for a meal later that evening. We were told that the helicopter will arrive the next morning at 5:00am. But of course, that did not happen and the whole helicopter story at the beginning was repeated all over again but this time at basecamp!

We were stuck for another 3 days in Yellow Valley waiting for the helicopter to take us back down. The day it arrived was probably the happiest day of my life. 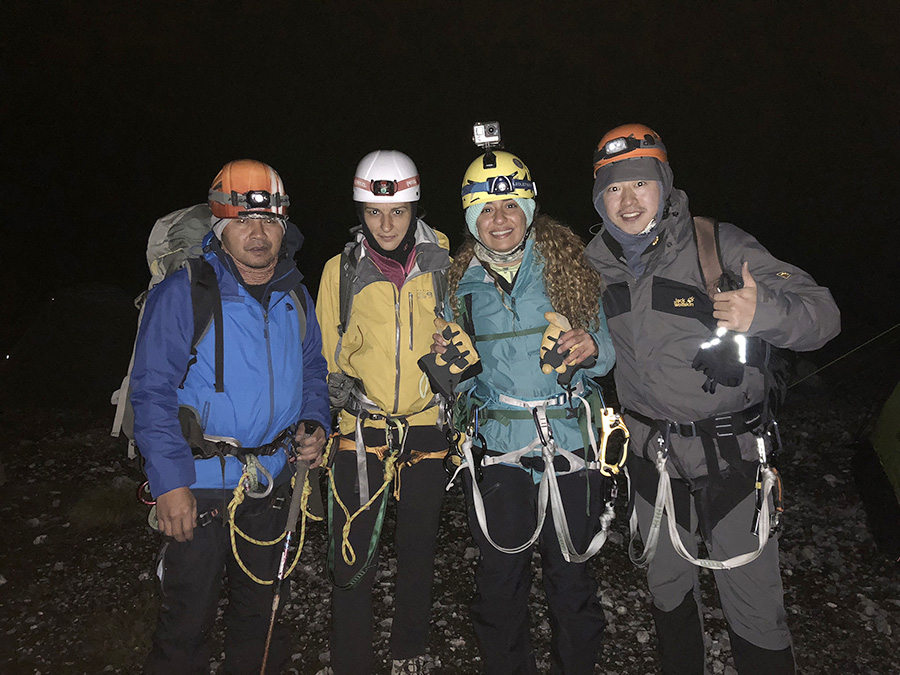 If you decide to go on and climb Carstensz Pyramid, here are some advise. Make sure you screen the tour operator as much as you can. There are a lot of tour operators that can steal your money and not take you to the mountain. Consider that you will be stranded for a couple of days either in the city or basecamp because of the fluctuating weather conditions. That being said, always book a flight ticket that you can change easily. Also, in terms of your clothing layers, take your old ones and don’t over pack. The climb is literally less than 48 hours if you are planning to take the helicopter.

Carstensz Pyramid is definitely a one-of-a0kind experience that you couldn’t get anywhere else except Indonesia! It’s a very beautiful climb that continues to change throughout the approach to the summit making the way up interesting and full of adrenalin. ■