When schools closed at the end of term 2, it was worrying. Parents were told that the kids would be on holiday for 2 weeks, and after that – distance learning would begin from home.

Around the same time, the COVID-19 virus was taking the world by storm and becoming increasingly stressful every day. Many of us got stuck working from home, or even not able to work at all. I was part of the latter, so overnight I became a stay-at-home dad for 2 young kids. Shortly after the distance learning began it was announced that distance learning would continue for the remaining 12 weeks of term 3. As panic and anxiety set in for both my wife and I, a hilarious meme of a screaming marmot (ie. a parent) started circulating on social media and it was a reminder that humor would be a large part of survival over the next few weeks while we were stuck indoors.

Along with the closure of schools, my son’s guitar lessons also stopped. It was a bummer because he was making good progress and I didn’t want him to lose momentum. This is where the idea was born to write a little song using classic nursery rhymes that he had already learnt in his music lessons. The song would be a fun way of him practicing his guitar – but with an upbeat touch. Along with the help of his music teacher (Mr. Shakeel at Sharjah English School), I composed the nursery rhymes and found that it was quite catchy. After lots of practice, we decided to record it – and once we had a recording, we decided to make a video. That is where the fun began! 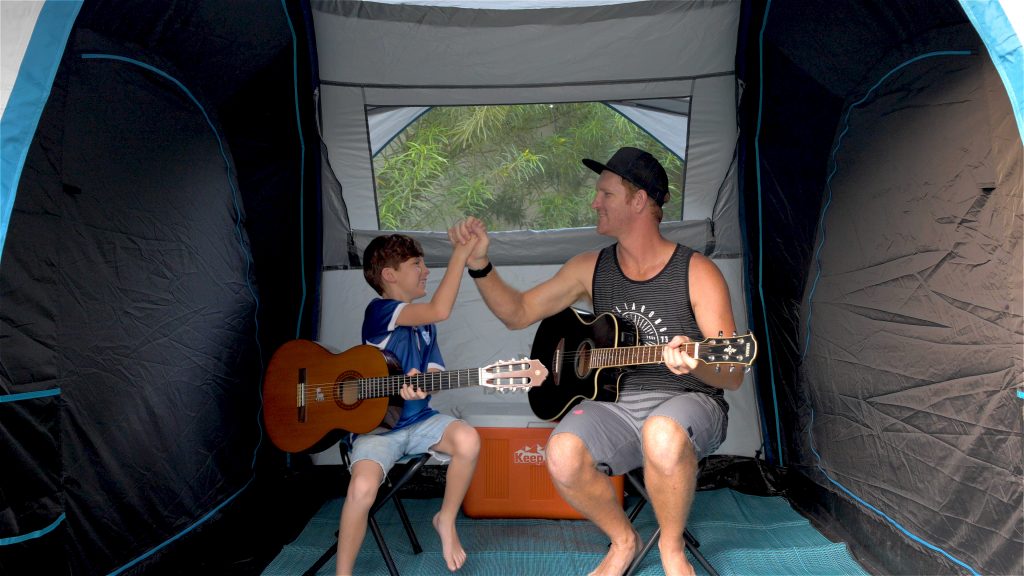 Fortunately, my profession is video/editing, so we already had all the equipment that we needed. We started brainstorming ideas and it soon became a challenge to see how creative we could get in trying to show things that we loved to do, whilst still being stuck at home. Out came the wigs and costumes, and it became a contest to see who could come up with the craziest idea! There were no rules, and before we knew it the whole family was involved. During the process we found an abandoned patch of trees at the back of our villa and it was a perfect opportunity to teach the kids the importance of recycling and taking care of the environment while we tidied things up. Infact, the whole lockdown experience has been a brutal reminder that we absolutely love the outdoors and are quite miserable without it. With that reminder, an appreciation of how fortunate we are and how essential it is to make sure the next generation is well educated on best practices for a sustainable planet.

In the end, this was a great little project for us to work on as a family. It got us all working together and it gave our minds some comic relief in a time where there was a lot to be unsettled about. The lockdown has certainly interrupted every aspect of our lives but we are all excited to be outdoors again and to visit our friends.

The camel trek we did in the beginning of 2019 was such a profound experience, that it was difficult to come up with a new task. It was quite a challenge itself to find something meaningful and exciting again. I have...
Read More