The infamous stairways to heaven

The first time I walked the Stairway to Heaven horseshoe in Ras Al Khaimah was a couple of years ago. I’d been living in the UAE on and off for about 8 years and thought it was time I saw for myself what all the fuss was about. I’d spoken to people about the route and heard all the horror stories about ill-advised attempts gone wrong. 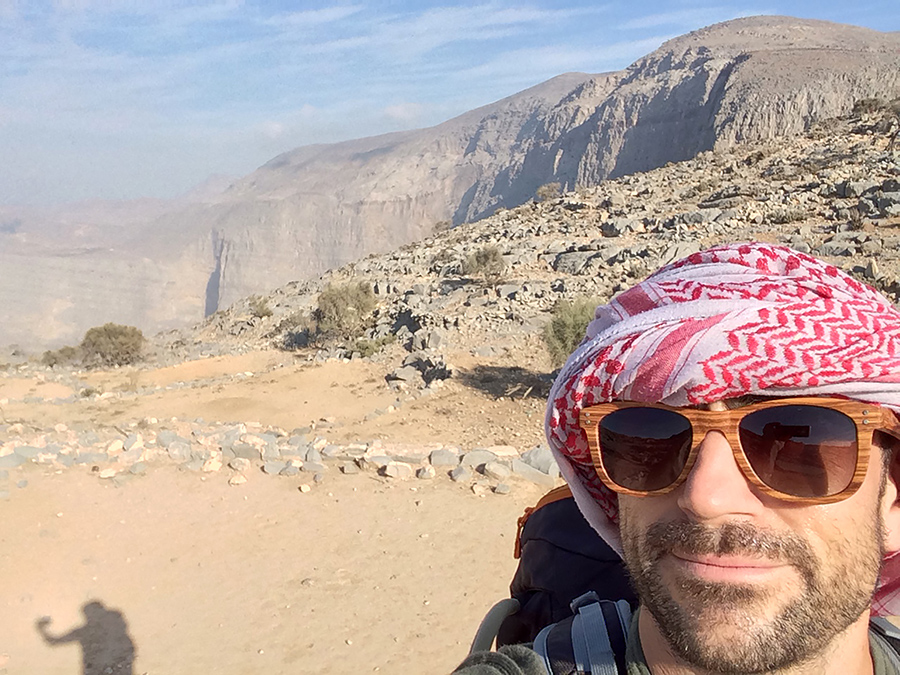 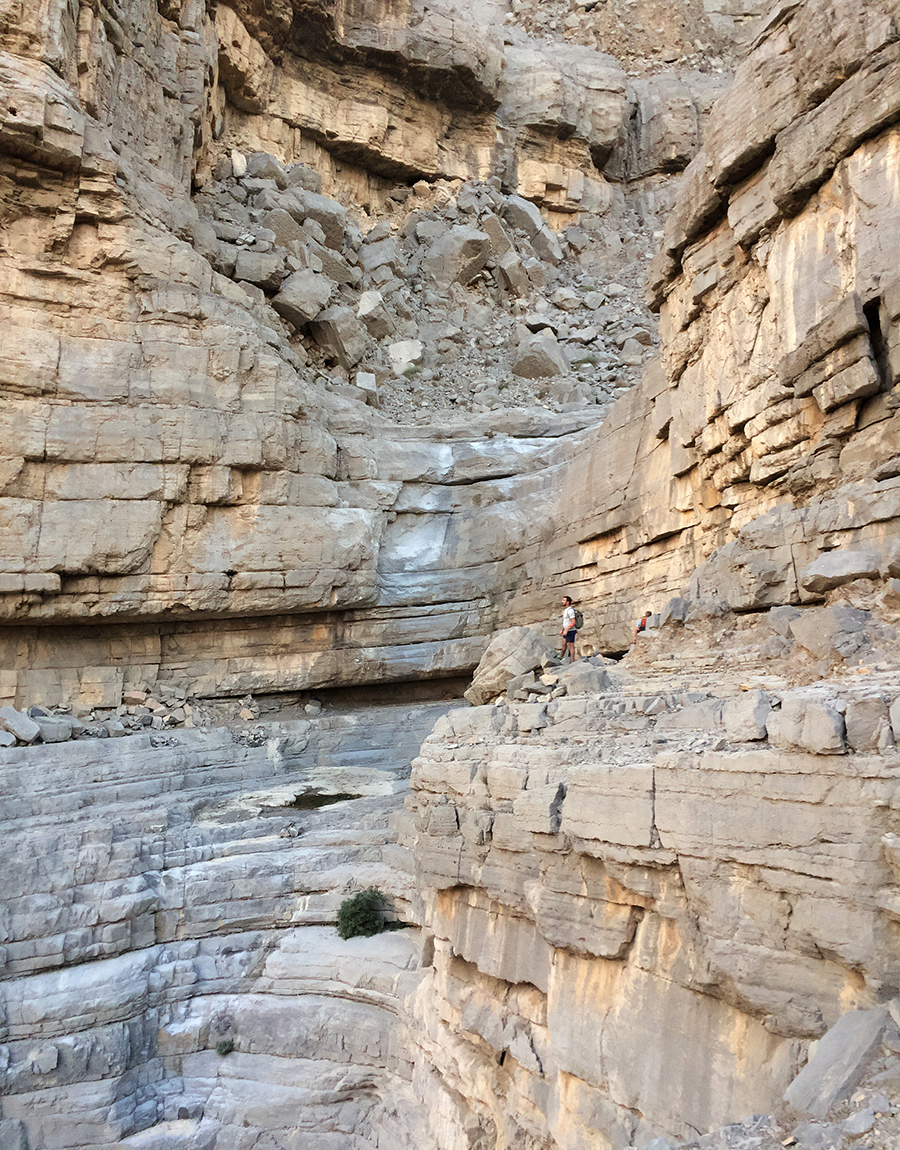 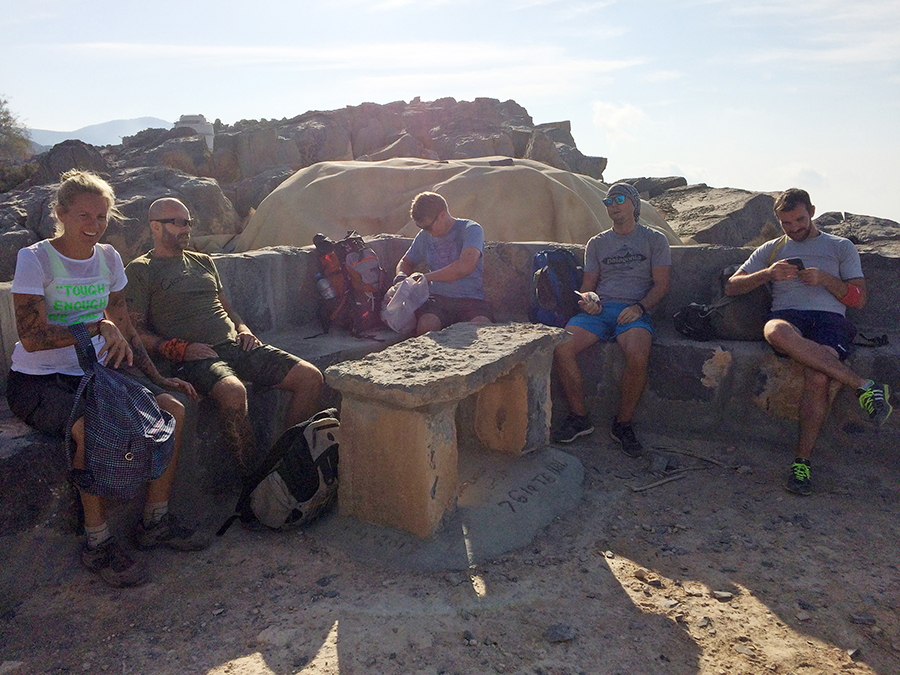 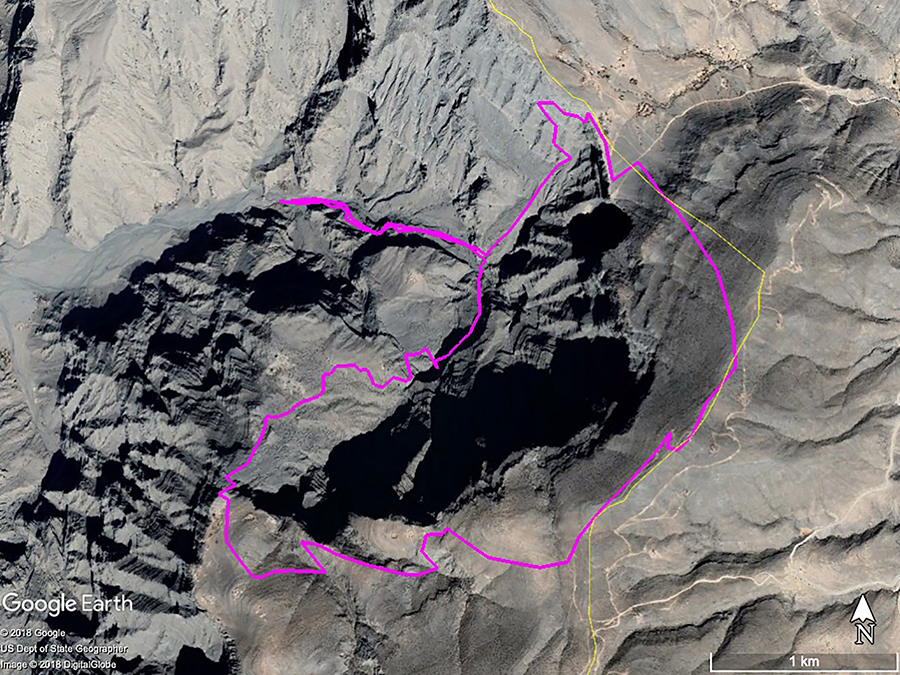 I’m a planner, but the UAE is not an easy place to find the usual hike planning materials (namely a decent map). I’d had a copy of the Abu Dhabi Alpine club’s notes on the route in my desk drawer for a couple of years but never done anything with them. Having decided it was time, I dug them out and studied the photographs and descriptions to understand the route as best I could.It’s not easy navigating from a description and photographs, so I used Google Earth to plan an approximate route based on their notes and converted that to a GPS file to take with me. I also printed out a basic map I made of the area using Google Earth and open source topography from openstreetmap.org.

I recruited a couple of friends who I knew to be experienced walkers/climbers and organized for us to stay at Ecoventure’s facility in Al Jeer the night before. This meant that we were only 15mins drive from Wadi Ghaliah so we could get an early start. They in turn invited another trio which made us 6 for the day.

We knew it would be a long day, I estimated the route to be about 20km with almost 2000m of elevation gain in total, so we planned to arrive at the start before sunrise. We arrived around 6am and set off up the last section of the wadi in the dark, it was December so it was a brisk start to the day. I had previously been up and scouted the initial part of the hike so I knew it would be easy enough to follow even if it was dark. What was previously an arduous ascent across the boulder field at thebottom of the wadi is now a well maintained path that makes for an easy start to the day. So easy in fact that before we realized it we had missed our turnoff and were following the path up the wrong side of the wadi, the one that was to become our descent route at the end of the day.

To get onto the Stairway route, when you reach the top of the wadi you need to look out for a cairn on your left-hand side. This is the first of many, not always obvious or well positioned, that will lead you to the top. Once you turn off the main path and start to follow the cairns there’s no discernible path or route and you need to keep your eyes peeled for the next one. Before getting to the base of the cliff where the Stairway begins you have to ascend a steep scree field, about half way up this there is a ruin and it was here that we ended up taking a long and unnecessary detour. After leaving the ruin we did not spot the next cairn and ended up going way too far to the left. By the time we realized that we had gone wrong we had already beengoing the wrong way for at least 30mins and after consulting the notes and GPS track it was at least the same again to get back on track.

The Stairway was initially built by the local bedouin as a way of getting their flock up to the high pastures and cooler temperatures during the summer and its age is evident from the areas where the rock has been worn smooth by hundreds of sandaled feet ascending it. At times these polished sections of rock are the only indication that you are still on the right track. There is nothing easy about climbing Stairway to Heaven, it’s steep, exposed, poorly marked and even in the winter you’re in for a long hot day in the sun.

The Stairway itself is a series of ledges and manmade staircases that wind their way to the top of a cliff, an ascent of around 200m. Although there are no technically challenging parts to the climb it is very exposed.A wrong turn can easily lead to a sticky situation. The route is often not obvious and you really have to keep your eyes open for the cairns and polished rock to stick to the correct track. Everyone in the group was in good physical shape but one of our late additions was not a fan of heights and really struggled with some of the more exposed sections. Fortunately, we were able to get them through these areas because working our way back down was not appealing to anyone.

Towards the climb to the staircases, stone piled up on the side of the cliff to form stairs. They are only small but as you get near the top, you find some really impressive examples that climb 6 or 7 meters and appear to be glued to the side of the cliff. It’s crazy to think that whoever built them would have had to move and place all of the rock by hand and would have had nothing in the way of safety equipment.

Before setting off I had made the decision that I did not want to come back down the Stairway and after having ascended it, I was glad that was not the plan. Leaving the car to reaching the top of the stairway took us about 6hrs in total (including our detour) but it was worth it and we were rewarded with a sweeping panorama from the top of the cliff. Despite all of the route planning, I had not really considered what we would find at the top of the stairway, I knew the bedouin used it as a route to moveherds but had not really thought about what it would look like. From the top, the views inland are almost as interesting as those looking out to sea, considering the cliff that you have just ascended the area is surprisingly flat with many farms decorating the landscape.

From the top of the Stairway we headed to the right and roughly followed the top of the cliffs with the aim of picking up the path that descended to the other side of the valley. There are paths and roads up on top of the plateau but initially it’s a cross country hike to pick up the path you need to bring you home. Once found it winds though a couple of small farms perched on the top of the cliffs before arriving at a lookout point at the top of the much more recently built, and tourist friendly, path back down into Wadi Ghaliah. By this point the shadows were getting long and there were tired legs not relishing a 1500m descent in order to get back to the cars. By the time we had descended back down to the end of the wadi, the sun had set and we walked the final section in the dark as we had done in the other direction earlier in the day.

Over the years a number of people have died on the stairway and many have had close calls. It’s easy to see why, the location is remote and inaccessible and environment unforgiving. Some warnings that have been given for the route include: “Do not underestimate this hike,” “It is essential to do it the first time with someone who knows the route inside-out,” and “It cannot be overstated how serious this hike is.” I can tell you from experience that all of these are accurate. Throughout the day keeping to the route was a challenge and despite it being December we ran out of water before we got back to the cars. I have walked the route again since, in January, but wouldn’t even think about attempting it outside December to February.

In the end we walked just over 32km (detour included) and climbed 1800m in just shy of 12hrs. It was a long day but well worth all of the planning and effort, the views are spectacular! ■

Oman’s green mountain has much to offer the outdoor lover. Clear skies, cool temperatures in the summer, and frost in the winter (if that’s your thing!); hiking, climbing, exploring; and of course, off-road driving. It...
Read More

Let’s Go Camping in the Desert

The Columbia Adventure Academy tells you how Camping is one of the most popular outdoor actives in the UAE and mostly combined with other activities such as off-roading, hiking or fishing. We want to give you a short...
Read More

Arctic Trucks Middle East is Back with a Brand New Off – Road Season!

The season kicks off with The Guide Oman’s off-roading adventure followed by monthly trips to the Dubai desert and a once in a lifetime trip to the snow terrains of Iceland in 2017. Arctic Trucks, the region’s...
Read More