Nico de Corato “Abu Yasmin” accomplished his challenge: running 140km within the Emirate of Dubai, in a single stage solo run, to celebrate the 47th UAE National Day. It began on December 1st at twelve o’clock from Bab Al Shams resort in Al Qudra. It took him 23h 05′ to finish his route until the iconic Union Flag in Jumeira (the biggest Emirati flag in the world, located close by the Union House) who found friends, relatives and supporters ready to greet him. The event was supported by the Dubai Sports Council (www.dubaisc.ae) while logistics and traffic were facilitated by RTA and Dubai Police. 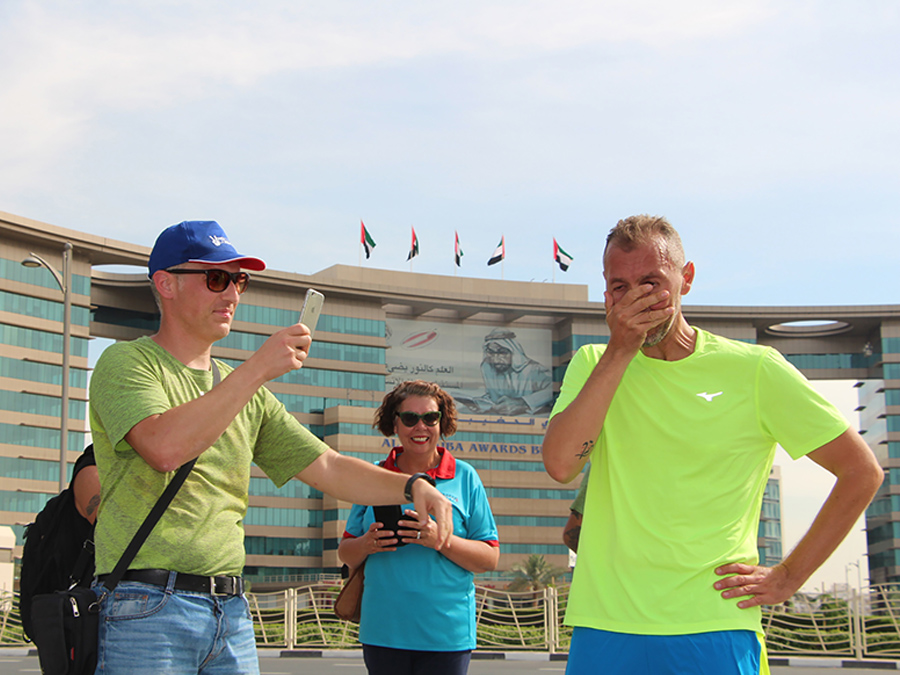 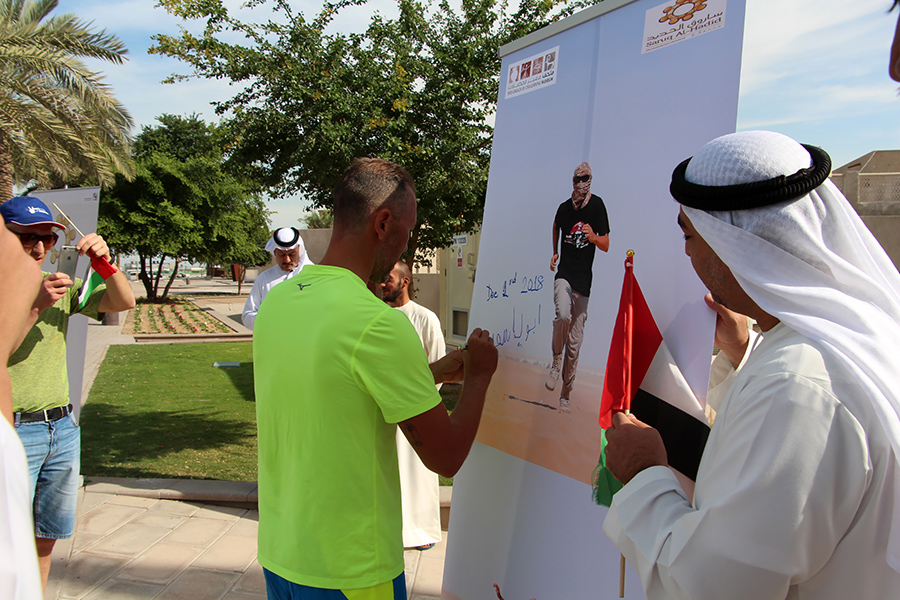 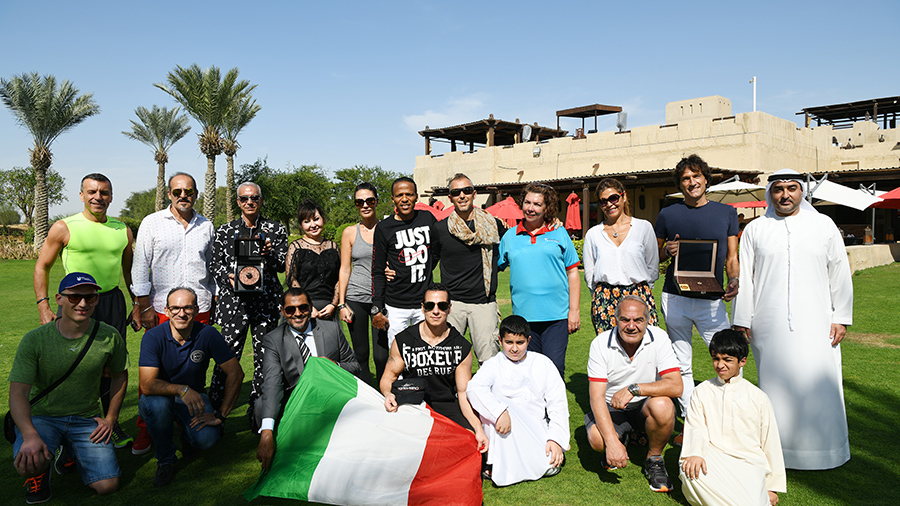 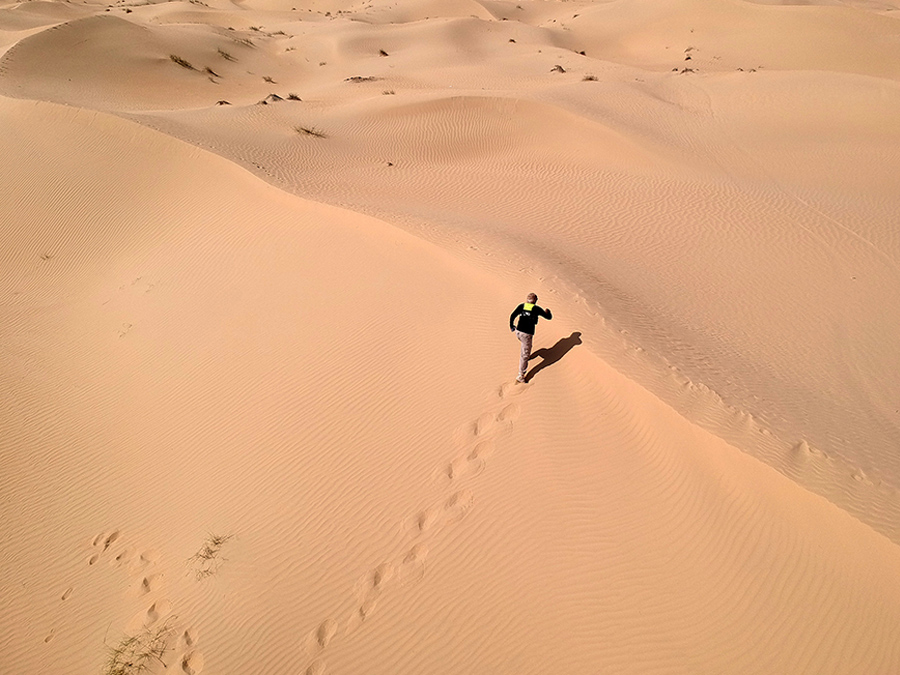 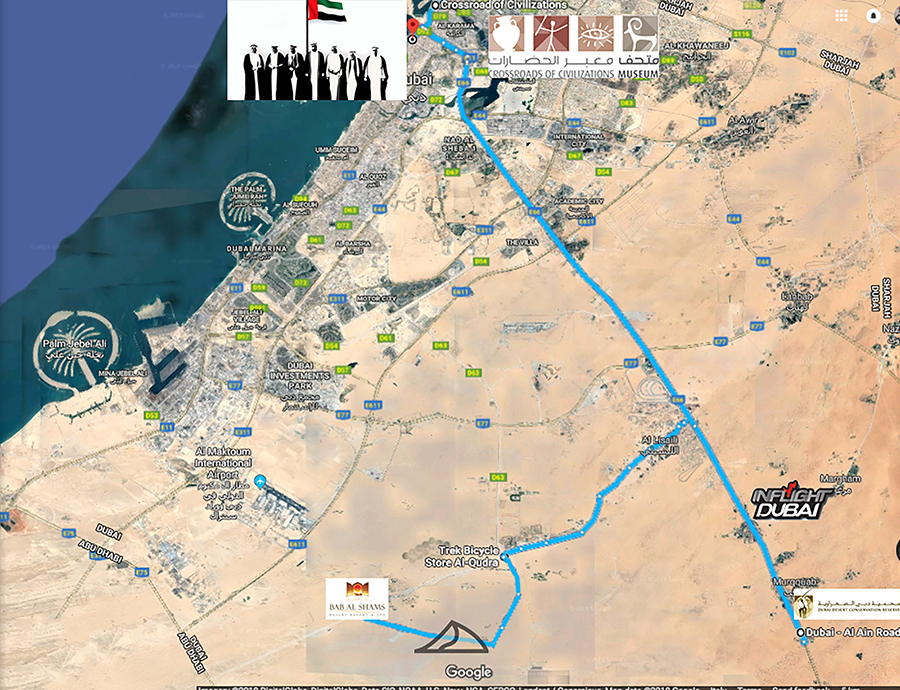 But let’s start from the beginning. It was almost 6 months ago when Nico who – let’s remember it – is a non professional ultrarunner, called me to say “I’ve got an idea…” Well, we know each other for 20 years, we attended the same university, and every time he says “I’ve got an idea…” a shiver runs up my spine. He told me about this crazy project, to run 140km, to add a full marathon to his previous challenge (the 100k run in 2015), and this time he wanted to involve me for the mental support. An occasion to do something big together, to finally come and see Dubai, and to support my friend in his personal record. So I accepted.

Living in Italy, I had the chance to meet him just a couple of times, but we were in touch every single day, to discuss all the details. Millions of things to do: our team was involved in all the aspects related to a project like: sponsorships, media, authorizations, physical and mental preparation.

I landed in Dubai and I found Nico & Domenico at the airport waiting for me. The few remaining days before the run were even crazier to check everything was ready, with a final surprise: the day before the event Nico got high temperature and ate nothing, but a handful of rice! I had to assist him, let him sleep all day long and we woke me up the day of the race, ready to start.

We went to the desert, to the starting point, where we met friends, family, supporters, partners waiting for us. I felt more tense and excited for him; as if it were normal for him what he was going to do. In a while: 3, 2, 1 GO! The start has been given by Rashid Al Qubaisi, from Abu Dhabi Police, UAE sport champion and Nico’s friend; “Abu Yasmin” disappears in the desert, and our adventure as support team started; he was carrying water, some food and basic life support tools, but most of the equipment was in the car, so the success of this challenge was on us as well.

I was impressed how fast it took to complete the desert part. We sent him a message after 90 minutes to ask for information and expecting him to arrive at checkpoint “alfa” after 2.30 / 3 hrs, but the reply was “Negative. I’m approaching it in 90-­‐120 minutes”.

I can imagine the desert part was the hardest one, but also the more fascinating, cause of the landscape. But grand part of the run was held along main roads, so it should have been a real test for his resilience. We were ready to go and rescue him, but he punctually arrived at each checkpoint.

As much as I know his relationship skills, I was impressed by the demonstrations of affection he received before, during and after the race. In person, as well as on the social media. Me and Valerio got requests for information. How is he? Where is he? How many kilometers did he run?

The night was never ending and striking at the same time; mostly along the main road, the E66, but we had the chance to visit some characteristic places (such as the Hum Yum restaurant, checkpoint bravo, who welcomed us for a quick recovery and Inflight Dubai which was checkpoint delta. We also saw a huge group of camels. Halfway through the path, Roberto Re (one of the most well-­‐known trainers and mental coaches in Europe, and Nico’s friend) joined him to run 10k with him. When he stopped he confessed to me “I don’t think Nico has realised the extraordinary nature of the challenge he is doing.”

During the challenge we scheduled several medical tests, performed by Dubai First Aid, to ensure Nico’s safety. They tested weight, O2 saturation, blood pressure, heart rate and other basic vital parameters one week before the start, the day of the start, after the desert, before the night part, and just after the arrival.

After the sunrise, we met him with 30Km to go but also with bad news. A knee started hurting, because of a hematoma he got a few days before. He could feel the part very “hot”; so he communicated to us his intention to skip the following check point, scheduled at the Dubai Design District, near the headquarters of the Dubai Sports Council. “If I stop, I risk not to be able to run any more. Moreover, I’m not able to eat any more”. So he changed the running gear from the night one, to the day one and after a quick drink, he started again running.

Particularly suggestive was the final check point, the Crossroads Museum of Civilizations, whose founder Ahmed Obaid Al Mansoori has left the museum open to the public for free for the whole day to welcome his passage. He also offered a typical Emirati breakfast to visitors. At this checkpoint, “Abu Yasmin” arrived with a severe pain in his right knee, which required compresses with ice and a 30-minute break. After more than 135km, I’m sure he could not quit, but I was very worried for his safety, so I decided to run with him for the first kilometer from the museum towards the Union Flag, then he asked to be left alone and rest. The last kilometers were dramatic and never-­‐ending for us waiting for him at the flag. But then we could see him arriving. He stopped at 500 / 600 meters. We didn’t understand what was happening. He seemed to be resting. Then he screamed, and started running faster and faster up to the finish line, where he started crying tears of joy. ■

Well done Nico! You are an inspiration for all us.