All Roads Lead to Rome Marathon

Olya, Alex and I first ran Rome Marathon together in 2014, and our most vivid memory of that marathon was the torrential downpour while we were waiting in the Start corral. We were so miserably wet and the rain continued that day until after the Finish, so our collective reaction to Rome Marathon was: “Never again!” 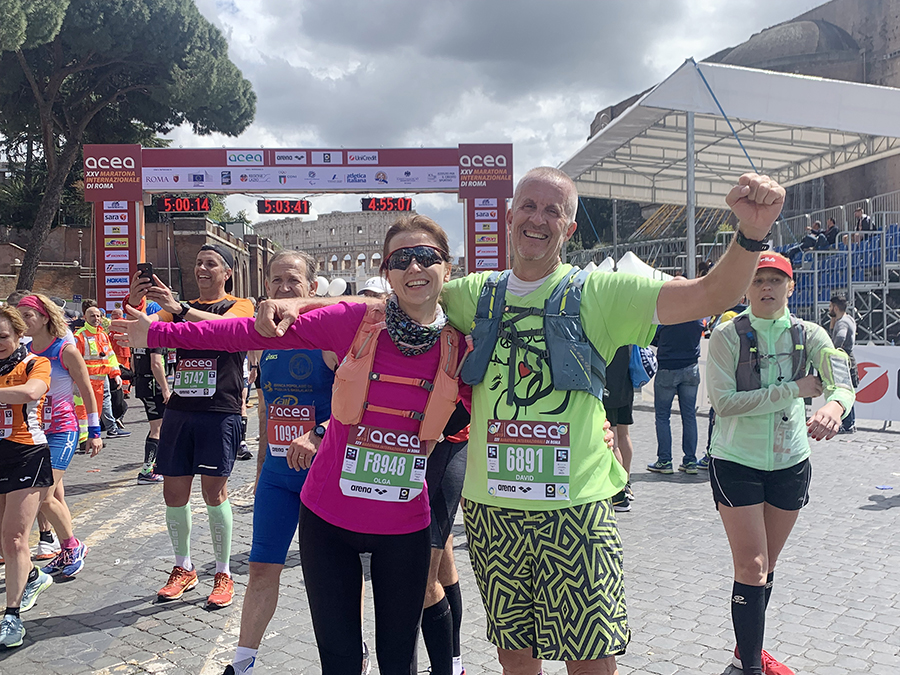 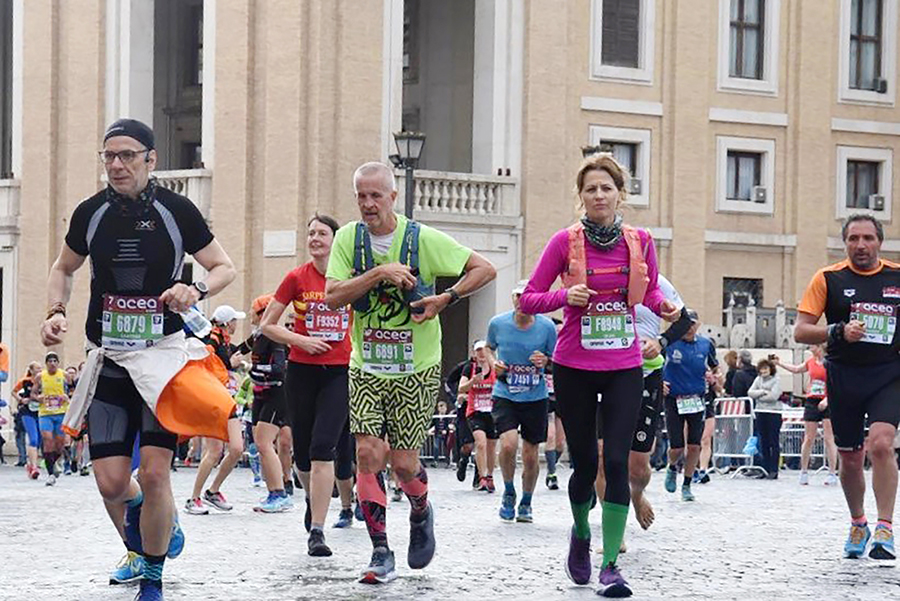 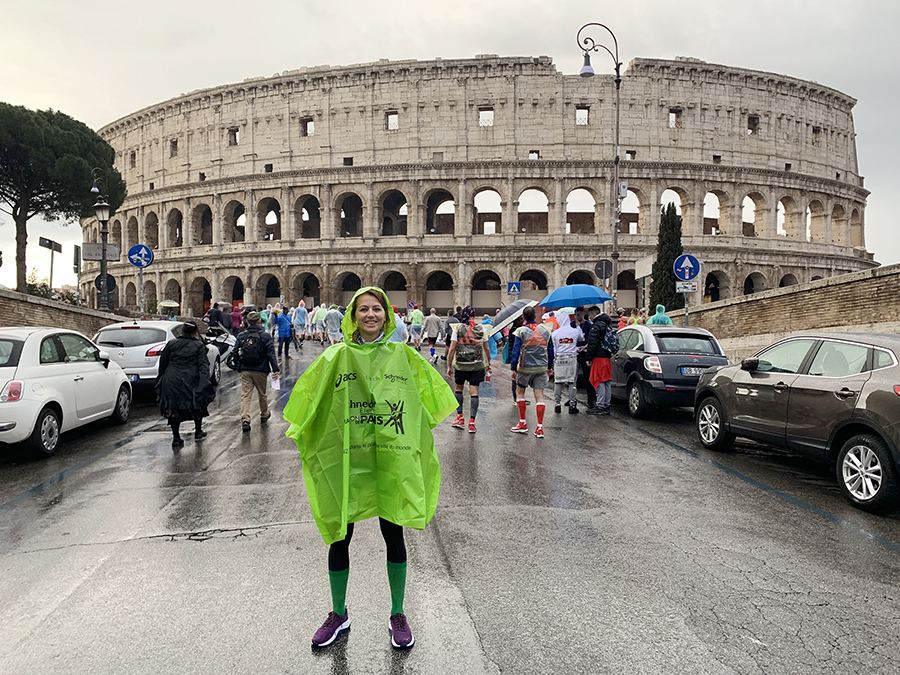 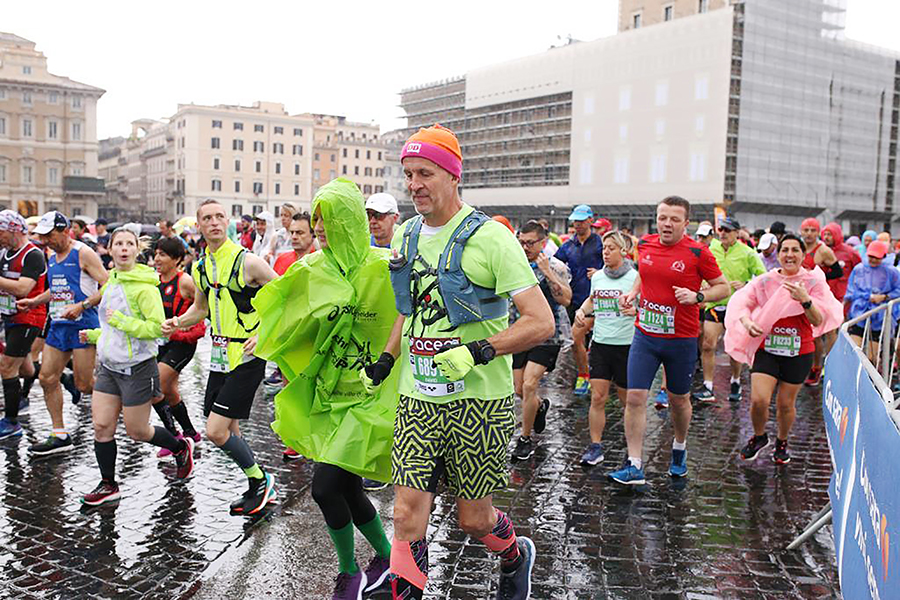 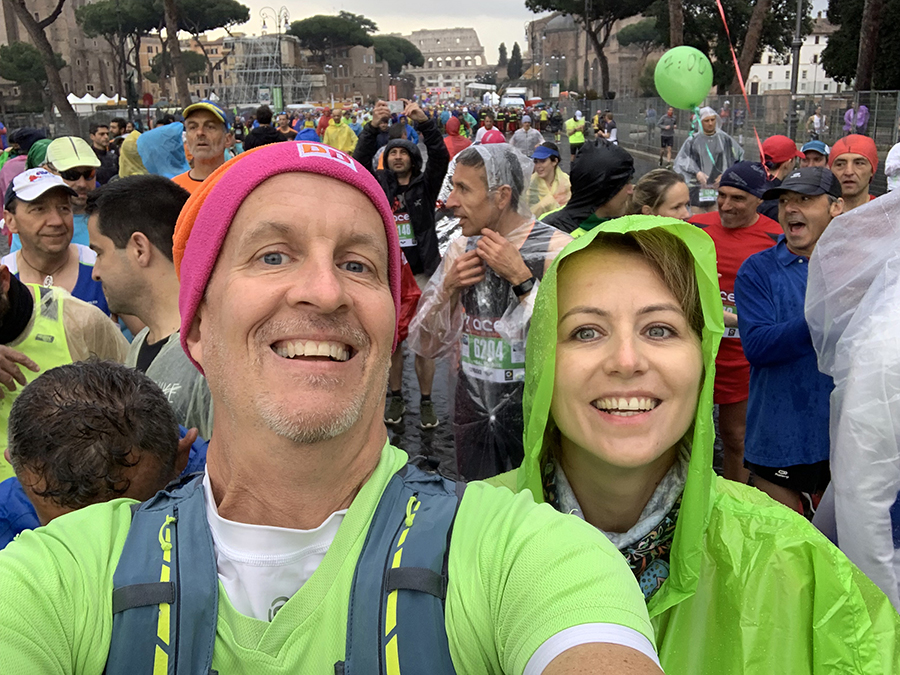 Roman Holiday
For the past six years in April Olya and I run the Paris Marathon as a target running event for our annual holidays. This year we decided to add Rome Marathon back into the schedule – but Alex declined. While Paris Marathon is a world class marathon with over 50,000 runners every year, Rome Marathon has a lowkey feel with locals not understanding why roads are closed, much less why people would want to run 42km.

The Route
The Start and Finish of the Rome Marathon are at the Colosseum, which makes it easy for certain geographically challenged tourists like me to find it. The route follows the cobblestone streets past Piazza Venezia and through residential neighborhoods for the first 15k, past the Vatican at 18km and then up to the Olympic Stadium at 25km. The route winds along the Tiber River, back to the center following Via del Corso, disrupting the tourists on the Spanish Steps, across Piazza Navonna, and back again to Piazza Venezia at 39km, before running a mainly uphill loop around the Colosseum for the last 3km to the Finish. The course is peppered with cobblestones throughout, which add a little flavor to the run, as does the revelation that there is a reason historians write about the Seven Hills of Rome.

The Start
As Olya and I walk across central Rome to the Start on a sunny Sunday morning, we jinx ourselves as we discuss the nasty rain at the Start in 2014. As an optimist, I don’t bring a rain poncho. As a realist, Olya brings a rain poncho. Yeah, it should be obvious where this is going … It is lightly drizzling, which soon becomes serious rain when we get to the Start corral. The Start corral appears to be manned by the same security who checks football hooligans at stadium as we are crammed, pushed, shoved and searched for about thirty minutes before gaining access to the Start. Much to my surprise, the event starts on time amid the commotion and apparent chaos.

Running Around Rome
Running a marathon in a big city can be a fun way to see the sights, so Olya and I decide to enjoy views and run together. The first 5km is a blurry wet memory, with me wearing gloves and a hat and Olya running in her waterproof poncho. Running on wet cobblestones is like running on broken asphalt, except much slicker. Once we find our rhythm, we begin to take in the sights. Most surprising for me is running past the Vatican after 18km – impressive building, but not easily discernible until you see the throngs of tourists lined up around the corner. The next 16km is more of a slog than a sightseeing excursion, so we simply enjoy the run as a good taper for next week’s Paris Marathon.

Running Historical Rome
When we enter the historical center, we know there is only 8km left and we go past many tourist sites – most of which we do not recognize. At this point, my phone starts buzzing with ‘urgent’ SMS’s from work. The juxtaposition of running a marathon amidst so many ancient buildings and after three hours having to deal with work issues on the fly makes me smile. As I am SMS’ing, we run past the Spanish Steps and continue to Piazza Navonna, where tourists watch us run past like we are just another tourist attraction. The sun finally comes out and we enjoy the last part of the run, especially the uphill at 41km before finishing at the Colosseum.

Destination Marathons
Traveling to a major running event like the Rome Marathon or the Paris Marathon can be a great weekend getaway, with some good advanced planning. Most cities hold annual marathons, so select one that has a good balance of a quality running event with your desire to see that particular city. It helps to check the marathon route in advance to determine if you will spend four hours running historical areas or industrial zones. Running destination marathons is great training for the Abu Dhabi Marathon in December and Dubai Marathon next January. Smaller events like Cappadocia Ultra Trail, Beirut Marathon or any ultra in Nepal in the fall are often surprisingly rewarding. The most important thing is to be fit and give it a try. Happy running! ■