When it rains in the desert of the Arabian Peninsula, it’s nothing short of miraculous. It can also be incredibly dangerous as well (as I would soon come to find out) and not just because of flash floods rushing through the local wadis.

When the rain did finally come to the oasis town of Ibri, Oman after a six month dry spell, I jumped into my Jeep to survey the damage the Shamalia, the winter storm from the north, had wreaked upon my desert outpost.

The streets had become Venetian-style canals flooded with café laté colored rainwater. Omani families cruised these waterways with the windows of their saloon cars rolled down, their desert gondolas for the day. Palms held up to the foreboding sky, they soaked in the pungent smell of ozone heavy in the air.

On the road that crossed the wadi, a normally dry wash, the whitewater rippled across the blacktop about a foot deep. The locals who were crossing it slowed to a crawl and put on their hazard lights. Not seeing the logic in this tactic, I gunned it across the wadi hoping that speed would keep me from being swept away by the current. Spraying water in my wake while overtaking a white Lexus with its’ windows rolled down, I forded the flooded riverbed with ease.

With the wadi now in my rearview mirror, the white Lexus pulled up next to me with four Arabs gesticulating wildly for me to pull over. I shook my head and closed my window. They pulled in front of me and jacked their breaks, pointing to the side of the road. Reluctantly, I pulled over but locked my door before I came to a complete stop.

The driver got out with the sleeves of his white dishdasha (a floor length shirt dress) pushed up to the elbows.  His friends followed suit. With just the glass between us, he motioned for me to open the window. As I did, he reached inside to grab me! I hit the button for the window to go-up, then the gas and wove in between him, his car and his cronies who were now jumping back into their car to give chase. There was barely time for him to get his hand out of the window before I peeled out of there, my adrenaline pumping. 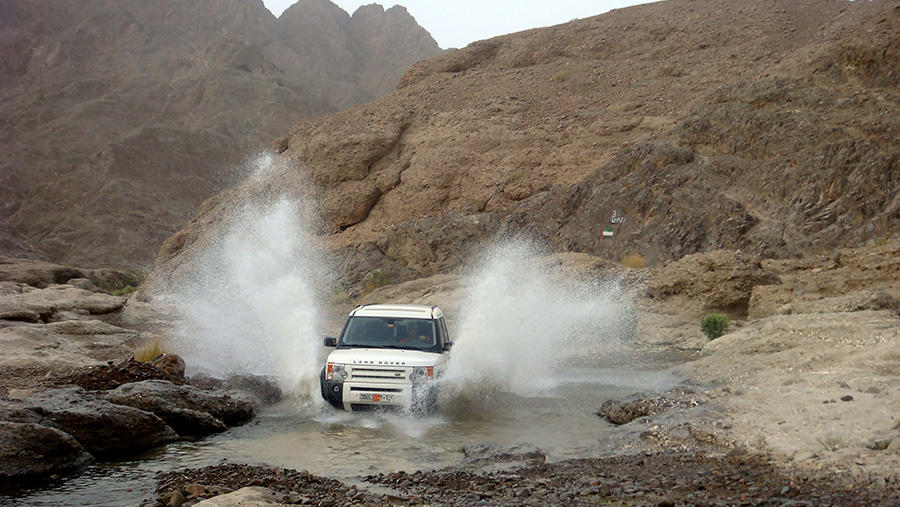 Suddenly, a black BMW came roaring past. Cutting in front of me, he slammed his breaks – forcing me to do the same. Trying to overtake him, he veered wildly, corralling me in. With the Bedouins in the Lexus now behind me again I realized they were trying to box me in! Feigning compliance, I veered towards the shoulder, dipped down through the ditch by the side of the road and up the embankment, hoping to lose them with my 4×4 capability.  Momentarily, it worked.

I soon found myself slogging through a warren of potholed side streets, puddled with rain. Omani children splashed about in the dirty water outside walled compounds. Then, in the rearview mirror I saw it – the white Lexus was right behind me again! One of the bedouin hoodlums jumped out in his dishdasha and ran for my door. Just managing to get his hand on the door handle, I throttled the gas again as the kids in the alley cleared out of the way.

Winding my way back to the main road, the black BMW was waiting. As I pulled onto the two-lane road jammed packed with locals, he followed close behind, his bumper nearly touching mine. Behind him was the white Lexus. With so much traffic on a narrow, two-way road he couldn’t get past me to try to sandwich me in again. Instead, he rammed me from behind trying to push me into oncoming traffic!

Eyeing a turnout for a petrol station, I let the BMW maneuver in front of me. Before the Lexus could ram me from behind, I veered though the gas station and slipped into slow-moving traffic moving in the opposite direction. Minutes later, the flashing lights of the Omani Royal Police appeared in my rearview mirror and I knew the chase was over.  I breathed a sigh of relief.

At the police station, I decided to not press charges and the felony against me (I had inadvertently splashed them) was dropped, ilhumdilelah (thanks be to God). 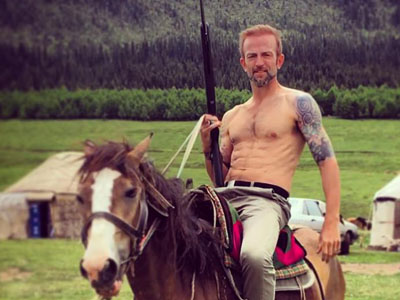