Last month, OutdoorUAE featured Andrew St Pierre White’s awe inspiring trip to Oman in a 6×6. We were therefore thrilled when we got the chance to meet him in person at the recent Outdoor and Adventure Show, to find out how this enigmatic story teller and adventurer turned his passion into his dream job, and to get his tips when it comes to planning an overland trip. Rachael Bruford found out more… 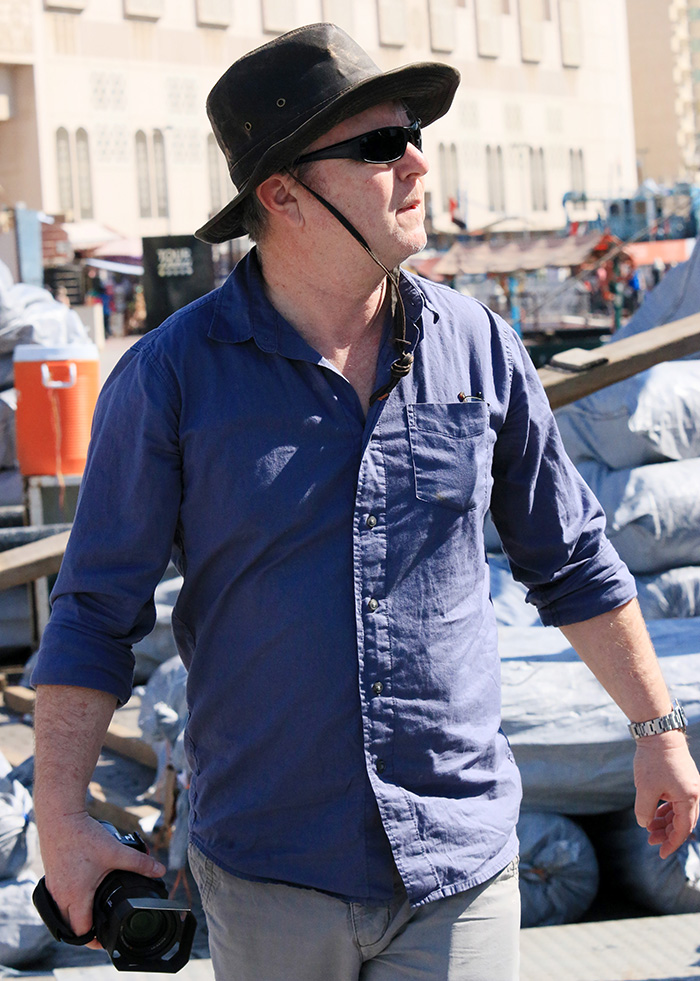 How did you transform your passion into your work?
I decided one day that I’d had enough of my previous work in the advertising industry. My wife and I spent a year in the Okavango Delta in Botswana, where we wrote an award winning book called ‘Torn Trousers’. It was also during this period of my life that I realised I didn’t want to go back into advertising. While I was there, I also wrote a book about four-wheel drive exploring, called ‘The Complete Guide to Four Wheel Drive in Southern Africa’, because I’d done so much of it and I realised that there was a need for it. Two years after I got back from Botswana, it was published and followed by another book. This was the beginning of a business which involved helping people to do what I loved to do. In 2011/12, the market began to change and I realised that I had a global audience. So I moved away from South Africa to England, which was when my film experience began to move into my passion, beginning with my YouTube channel.

You have described experiencing a ‘benign insanity’ whilst on your solo expeditions. What made you want to get out there by yourself?
I read a book by Tom Shepherd, and wanted to understand his motivation for going away on his own. So I did my first solo trip in 2008, and it failed because the tyres ripped apart in a very remote location. The risk became too great, so I decided to prepare better and come back again in 2009. The 2009 trip was an incredible experience. It was lonely at night, and every now and again I had to check myself to prevent myself from doing anything foolish! The sense of being utterly alone is strange because every second of our lives we are dependent on other people. We interact with and care for so many people in day to day life, so when you’re in the situation of doing a solo trip, the only person you are responsible for is yourself – it’s a strange feeling! I’ve done three trips now and plan on doing more. 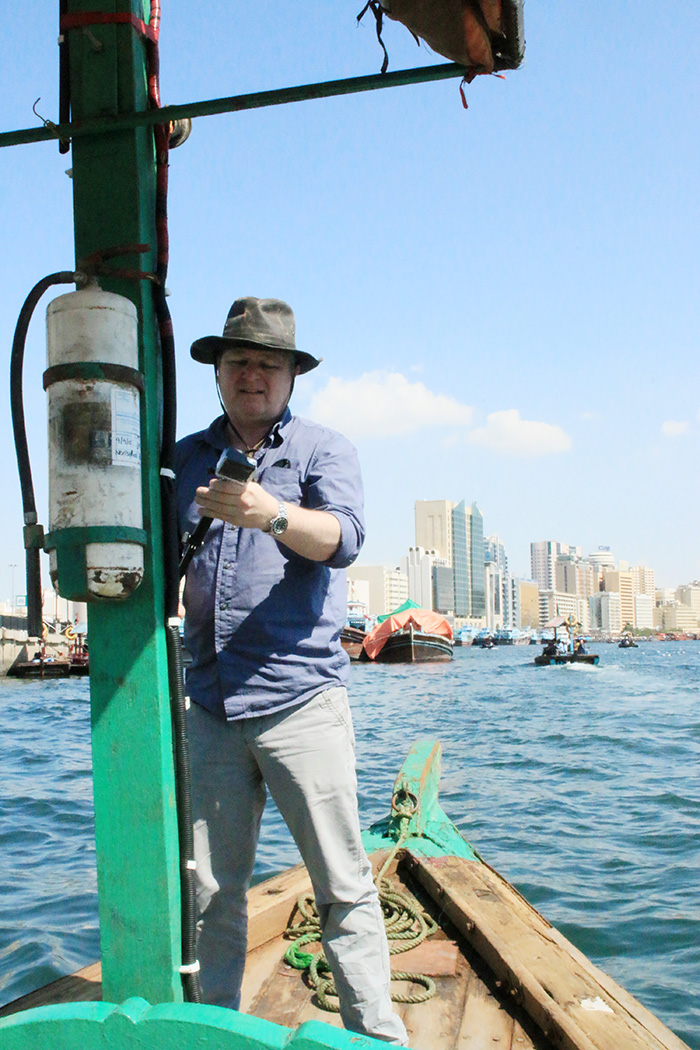 How does travelling solo compare with travelling in a group, and which do you prefer?
My wife and I travel together whenever we can, but she has a grueling schedule (as a best selling fantasy author) and cannot always come with me. We are very careful with who we take with us. The trips now have evolved into business trips, where I aim to create videos. Apart from safety, everything else comes after the videos, so people need to understand that I sometimes only have seconds to get into position to get the shot. It can be quite intense. 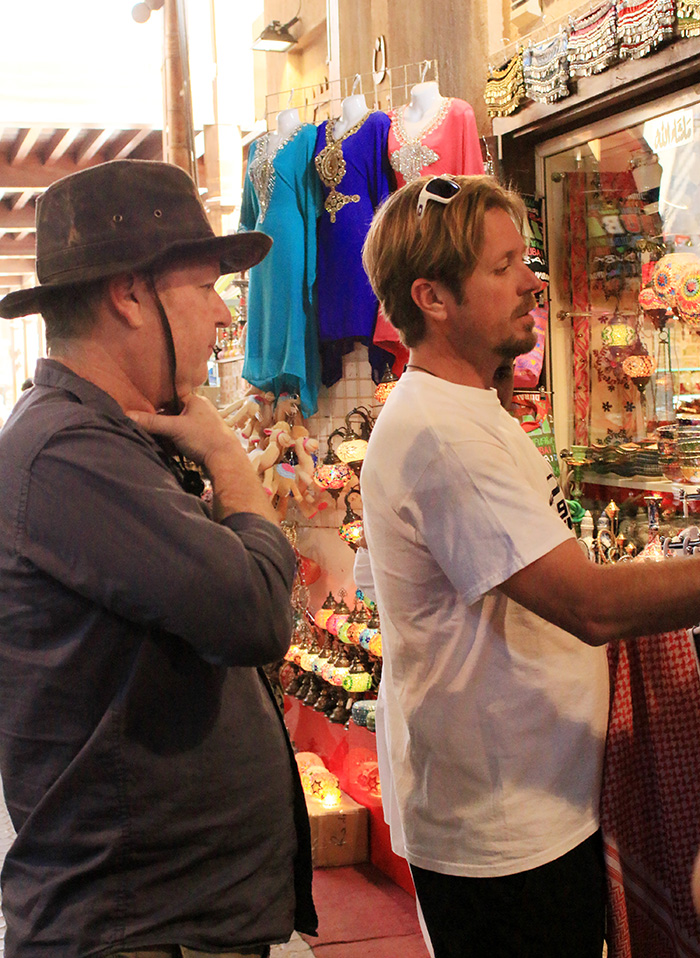 When it comes to planning trips, how do you go from the initial idea to seeing it through?
I do research and reading to begin, and ask myself, “is there a story to tell?” I never know what the story is going to be, which is the best part, but as long as I have the foundation then that’s enough. When I went to Oman (as featured in last month’s OutdoorUAE), I was told that we would go through the desert, mountains, wadis and riverbeds, and perhaps see some turtles. Then I was told that I would be driving a 6×6, which ended up being the main story. Oman turned out to be fascinating, so everything combined turned out to be a great story. I’ve never made anything up, and I never will. I don’t force myself to go out and get the story, so it’s a risk I take on every trip. Most of the time, the stories just appear!

I go without a script and with the equipment I think I need, and I begin filming. If by day three nothing has happened, I start to worry. But generally, it all comes together in the end. The editing process takes about five times longer than the trip. 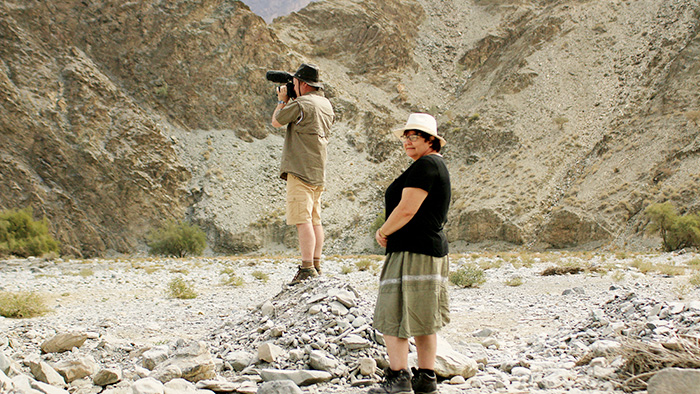 Out of all the places you’ve been lucky enough to visit, do you have a favourite?
Yes, I definitely have a favourite. In fact, I have two, and they are both in the Kalahari. One of them is the Central Kalahari Game Reserve, which is an enormous area of solid sand dunes that are covered in grass. It is the most peaceful place on earth.

Another place which I love to photograph is on the Makgadikgadi Salt Plains. The Makgadikgadi is larger than Portugal and completely flat. There’s a place there called South Island which I’ve tried to visit five times but have only managed to get to twice because of the mud. You can see the curvature of the earth from the pans, and at certain times of the day you can actually see the curve moving away from you and disappearing.

What would be your top tips for getting started with a longer trip, for those who are planning one for the first time?
There’s a culture in this industry of thinking that you need lots of different gear to go on a trip. The fact is, you don’t need that to go on a trip. Of course, there are some basic things, but a lot of people will think “I’ll go when I get this…” My advice is, “Just go on a trip!”. You’ll have a better understanding of what is needed, as opposed to what the market will suggest that you need. Getting all of the right gear is not going to make you an expert. Travel first, get gear later would be my main piece of advice.