Relaxed visa rules for UAE residents, a short three-hour flight and of course, host of myriad experiences on offer have resulted in a rampant spurt in tourist numbers, so much so that Georgia has been nicknamed UAE’s weekend destination. It is a country that grows on you, slowly yet steadily! And there’s no chance, that you can’t love it! 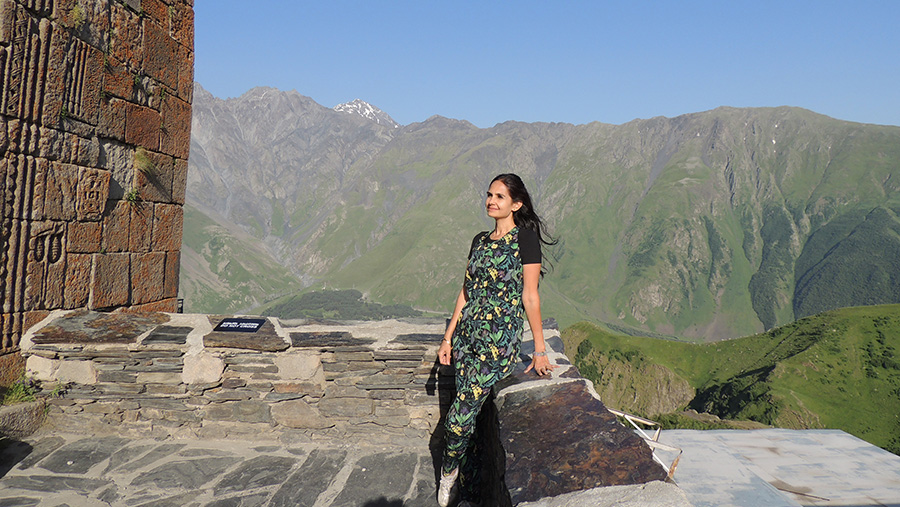 Georgia is a beautiful melange of monasteries, churches, bridges, medieval buildings and neo- architectural buildings. The Georgian capital, Tbilisi that straddles both Europe and Asia is a travellers’ delight with its tantalizing cuisine, distinctive architecture and unique confluence of cultures. 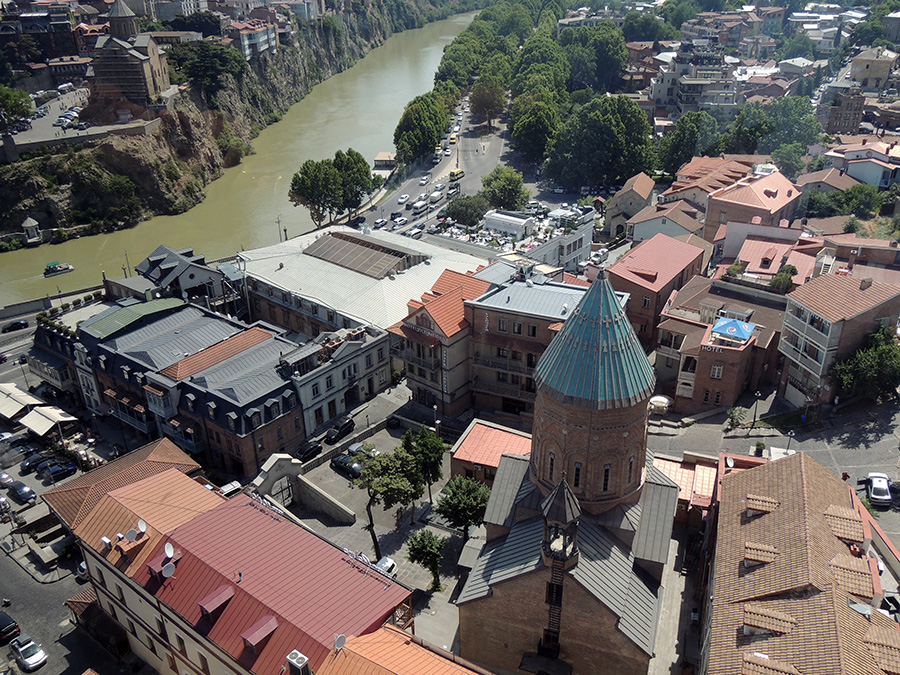 Here are some of Georgia’s highly frequented and stunning sites which are a must inclusion on every itinerary:

1. The most striking feature of historic Tbilisi are the medieval-style buildings with conical roofs as if randomly stacked over one another. 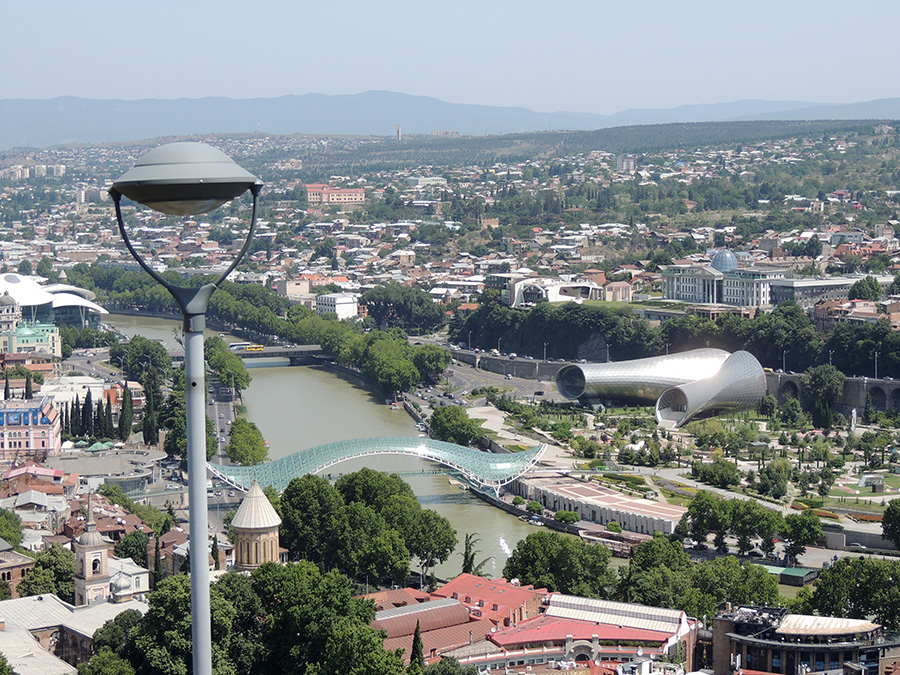 2.The views of Tbilisi cityscape as seen from Narikala fortress is replete with modern-day architectural structures like Bridge of Peace, the mushroom-shaped Justice Building and the bugel shaped Concert Hall. A country of stark contrasts, one can easily notice the ancient buildings existing side by side with futuristic architecture. 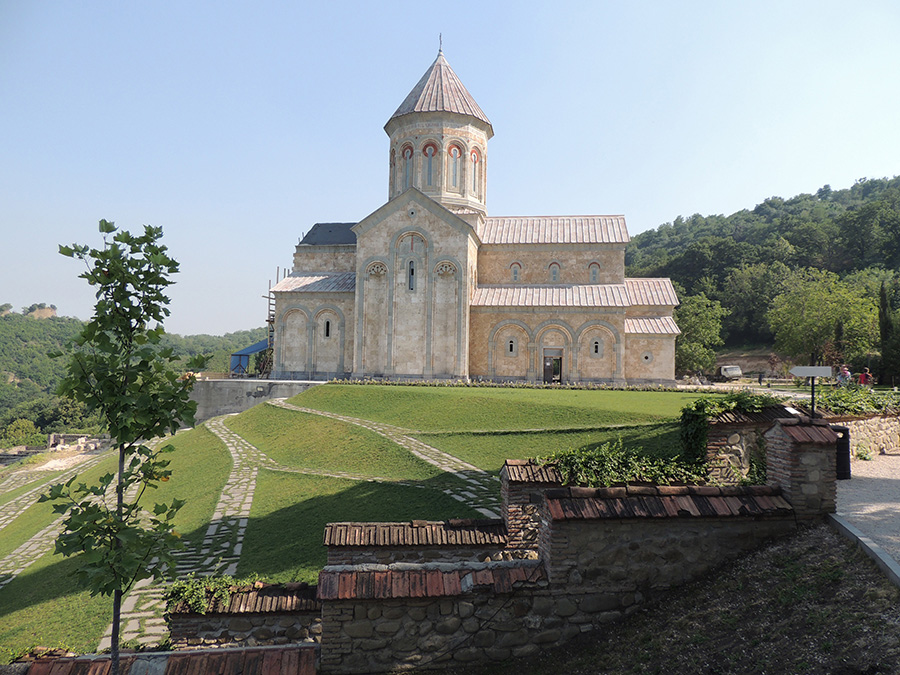 3. One of the first religious buildings in Georgia, Bodve Convent is an Orthodox monastic complex. Located in charming surroundings of beautiful flower beds and stunning views of Alazani valley, it is a marker of serenity amidst tranquil surroundings. 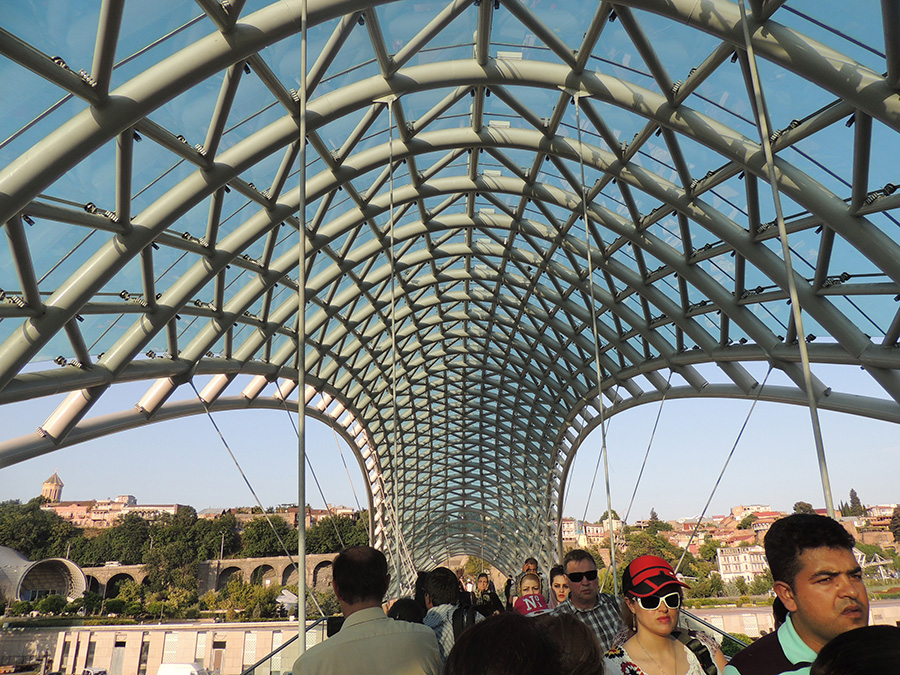 4. The Bridge of Peace is a stunning example of modern architecture in the historic centre of the city. A fascinating structure comprising of the bow-shaped curvaceous canopy, the Bridge of Peace remains the most unmissable landmark of downtown Tbilisi. Clearly taking a centrestage on the Tbilisi cityscape, it serves as the perfect viewpoint for amazing citysights. Located on Kvari River, during daytime, it appears calm and tranquil, but bursts out into incredible lighting after dusk hours. 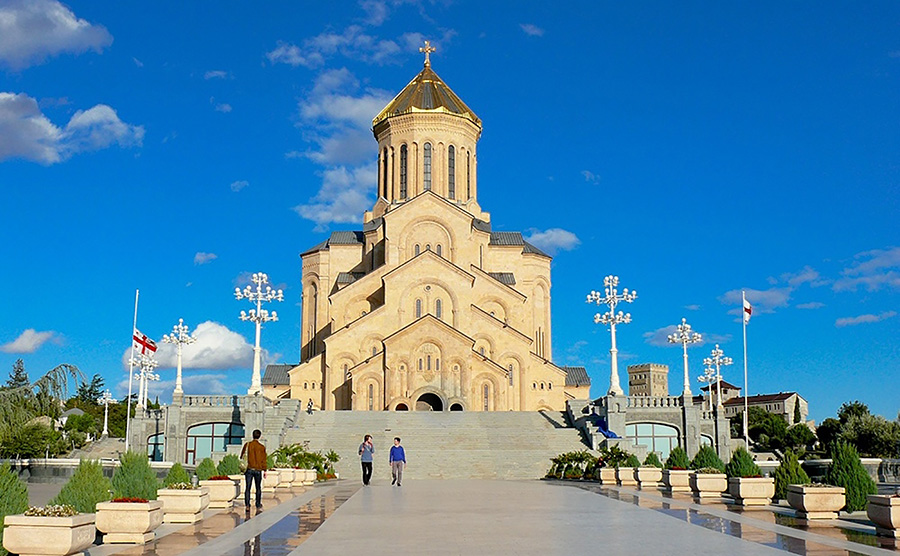 The beautiful facade of Holy Trinity Church in Tbilisi

5. The picturesque locale of Gadauri region is a popular ski resort and hub for myriad winter sports. The Cross Pass in this region is the site for the colourful Russo-Georgia friendship monument. Built in 1983 to commemorate the ongoing friendship between Georgia and Soviet Russia, this monument claims more attention as it is located at one of the most visited viewpoints surrounded by mountains and lush greenery. 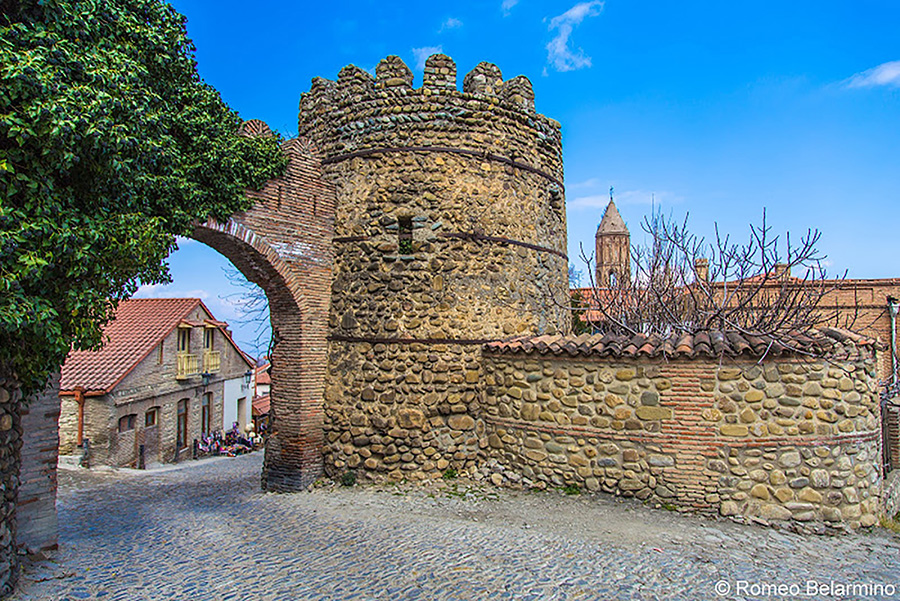 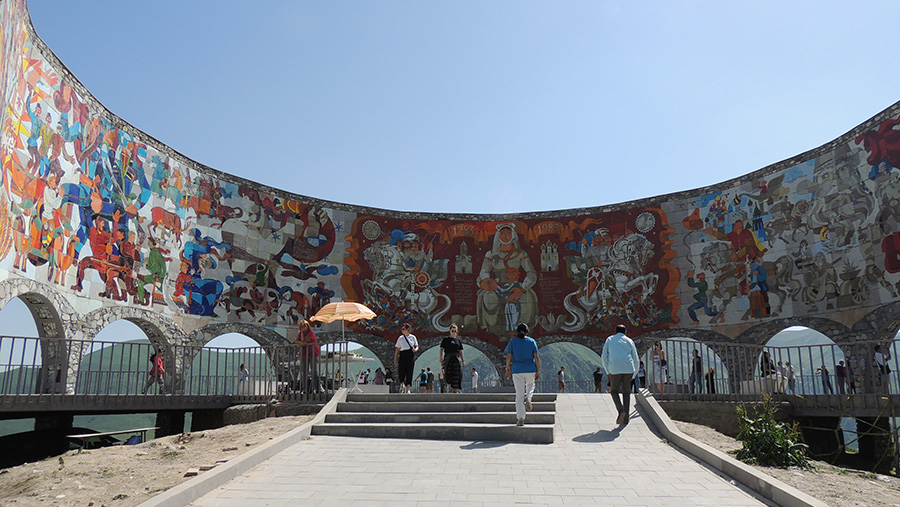 6. Located on Mount Kazbegi at an elevation of 2170 meters, lies the Holy Trinity Church in Gergheti. Amidst astounding beauty, Gergheti Trinity’s modest exterior appears all the more breathtaking for its simplicity and is a unique escapade to a seemingly different world. The Trinity Church was built in the 14th century and carries the distinction of one of the most well-preserved monuments in Georgia. Despite its long-standing, the architecture hasn’t suffered any modifications, and hence gives the impression of being ‘frozen in time’. Even if you are not a history buff, you can anyways enjoy the mesmerizing and meditative views of Mt Kazbek and the valley beneath. 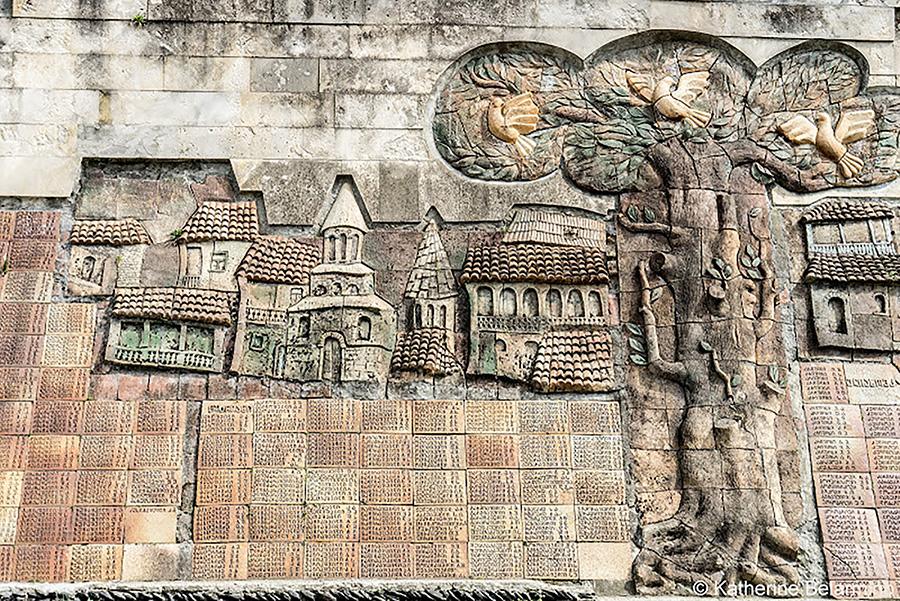 7. The biggest cathedral in Georgia with a shimmering golden roof is visible from almost every part of Tbilisi. The Trinity Church in Tbilisi is one of its major landmarks. the view of Trinity church seen as a predominant structure from the funicular ride upto the TV Tower is one of Tbilisi’s hottest attractions. What turns out at the end of funicular ride is nothing short of a surprise story as a complete entertainment complex replete with cafes, restaurants and the pivotal structure of TV tower greets the visitors. the TV tower with its glorious lighting makes for one of the most attractive sites after dark hours. 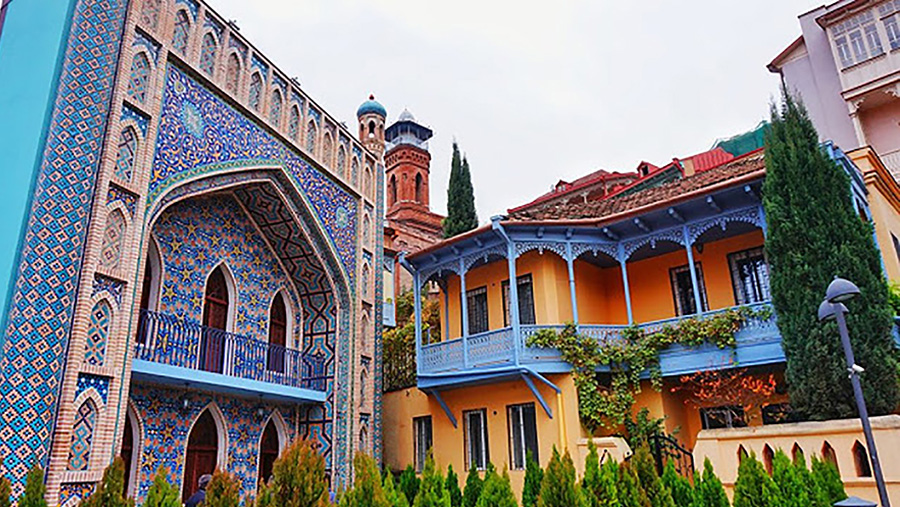 8. If there is one thing that one should not return without experiencing in Tbilisi is the Sulphur Bath, which also remains one of its most unmissable experiences. The dome-shaped structures actually turned out to be a highly popular, plush venue for experiencing sulphur baths, massage, steam and sauna facility. The blue Islamic building in Abanotubani neighbourhood of these sulphur baths shows the cultural diversity in Tbilisi really well. 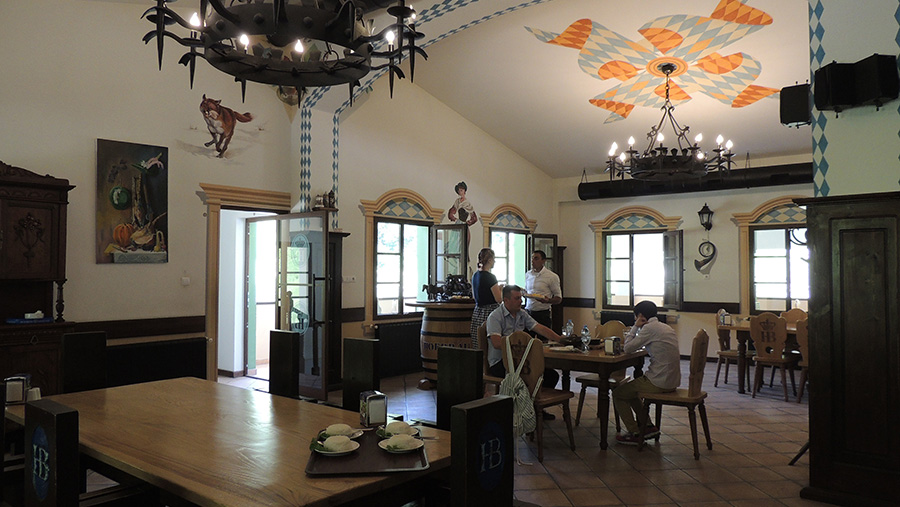 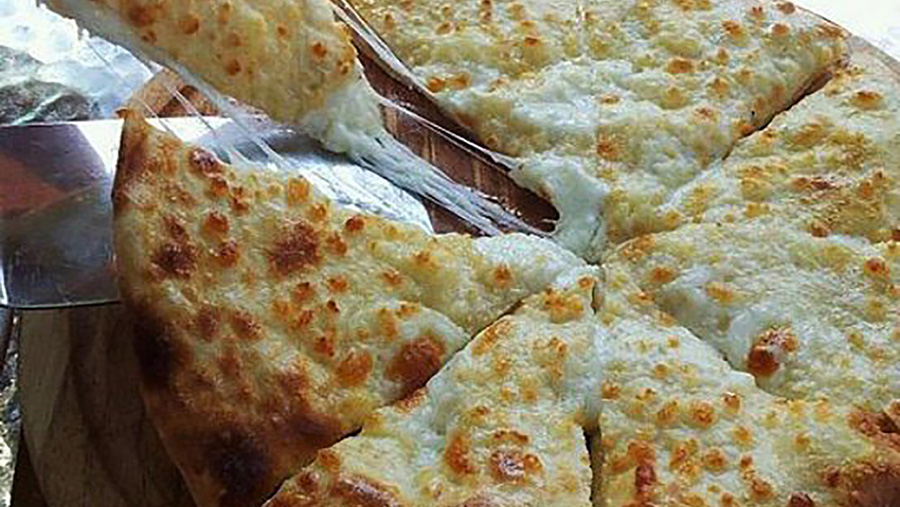 9. If there was one restaurant that has taken my heart, it would be the popular German restaurant named Hofrau Munchen in Gadauri. The neatly painted frescoes, antique chandeliers, teakwood furniture and chequered curtains give a true German feel, while serving authentic Georgian cuisine. The much loved khachapuri was almost like having a cheeseburst pizza, while another local starter called khinkhali was similar to momos stuffed with cheese. Ajika is a delicious local chutney made with herbs and pepper, while freshly roasted mushrooms tasted divine. 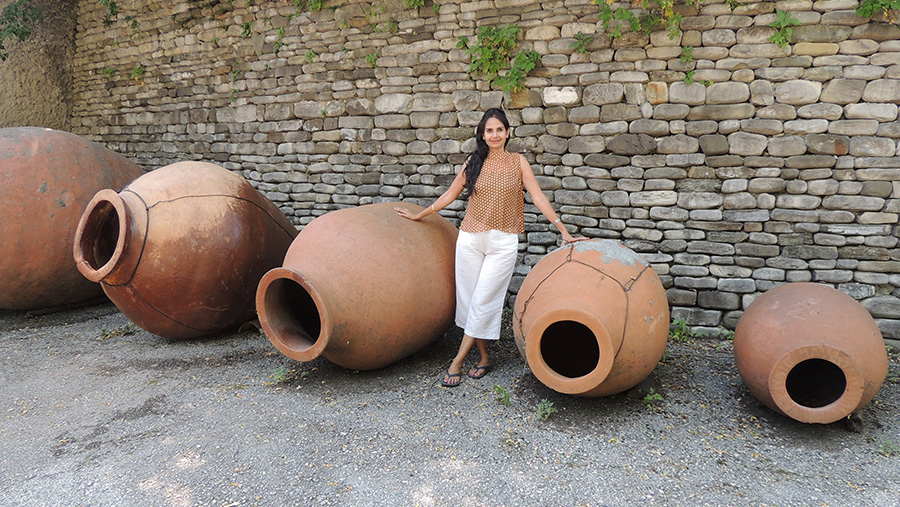 10. Sighnaghi is a small town in Kakheti province with an approximate population of 3,000. It is unique because it has well-preserved fortress walls surrounding the city and the homes date from the 18th and 19th centuries. The streets are cobblestone and the town has retained its original feel. ■