Indonesia: An Island for Everyone

About Indonesia…
As the largest archipelago in the world, Indonesia is made up of over 17,000 islands, all separated by sparkling, vibrant blue water. No one island is the same as the next and each one has it’s own unique pulls and special charms. This in my opinion is the greatest thing about this remarkable country – so many islands scattered across an ocean, coming together to make one destination that can satisfy every type of vacation. 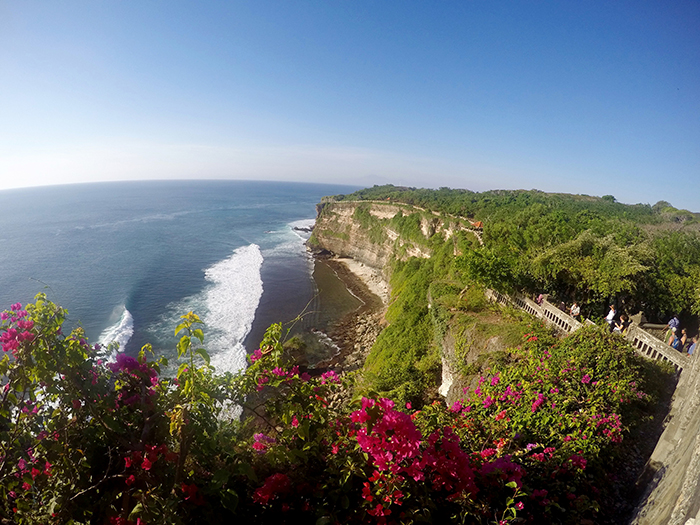 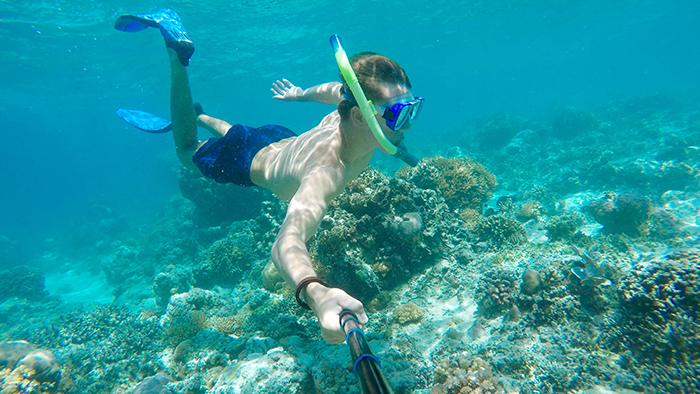 Although there are thousands of popular tourist destinations around the world that can offer the landscapes, the adventure and the relaxation, the destinations that can offer truly unique experiences found nowhere else are becoming increasingly rare. Fortunately, there are a few left, and Indonesia is one of them. This unique experience comes in the form of a dragon. 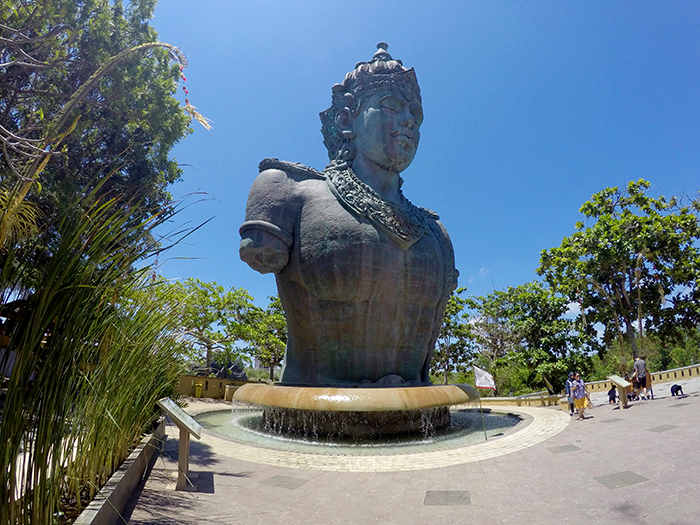 Dragons in Komodo National Park
Yes, dragons do exist, but only in Indonesia. In the southern part of the country, there is a set of islands that make up Komodo National Park, covering an overall area of 1,733km2. The dragons aren’t alone on these prehistoric islands, but instead live alongside deer, monkeys and even wild horses: all of which have become prey to the Komodos at one point or another. The islands that make up Komodo National Park are wild, densely populated with animals and are unlike any other islands around the world – which would naturally make it my first stop in Indonesia.
Within the National Park was Rinca Island, one of many islands that thousands of dragons call home – which was immediately made evident upon arrival as we were instantly greeted by a Komodo Dragon napping under some trees on the entrance path by the dock. We were able to get surprisingly close to the sleeping giant and quickly take some pictures, and then we moved on to meet our rangers. Visitors on the island are assigned one or two rangers to escort them along the trail, for safety reasons, and so they can help spot the dragons. Even before we left the meeting point we came across several dragons grouped together under the rangers’ station, trying to catch some shade – they were packed tightly together, with some even crawling over one another in the fight for the coolest spot. 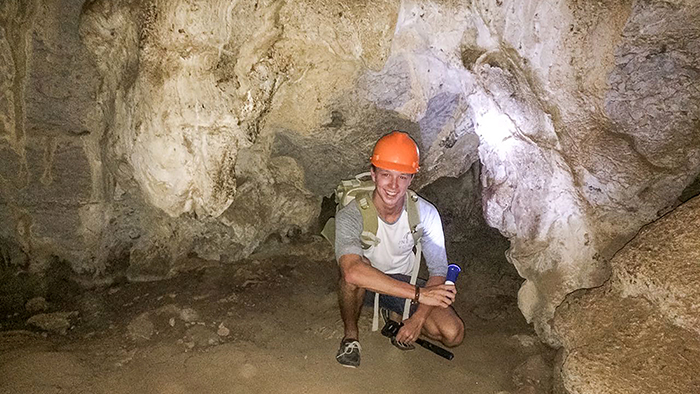 Moving on, further down the path we came across a female, sleeping in the middle of about six holes in the ground. When I asked why there were so many holes, the ranger informed us that one hole was to protect her eggs, and the other five were to act as a distraction to any other predator hungry and in search for a meal – revealing that their strength and their jaws aren’t their only evolutionary assets.

Concluding our tour of Rinca Island we moved onto the next one – the famed Komodo Island. Much like Rinca Island, as soon as we stepped foot on the sand, the dragons were in sight. The five that we encountered on this island seemed larger, and more active, with a few even walking around – one in the direction of us – prompting a quick shift to the side. Although the dragons were moving slowly, you certainly felt the weight of their footsteps as they pounded into the ground and sensed the strength of their tail as it swept away anything on the ground near them. But the dragons aren’t the only attraction in Komodo National Park, as the waters surrounding these islands are filled with just as much wildlife. 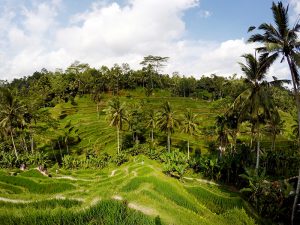 Rice terraces and traditions
The area of Ubud also has other spectacular settings as well as jungles. One in particular is the Rice Terraces of Tegallalang. These terraces carved into the walls of this valleynot only create a spectacular site, but are also still used today to produce rice for the island. Along the top terraces are palm trees, which run along the valley, almost like a fence. Descending down the terraces to the lower levels I passed women with baskets atop of their heads and children playing and laughing as they climbed down the terraces alongside me. Reaching the lower levels of the valley and looking back up the sheer size of the site was immense, reminding me almost of the Grand Canyon in the USA. It provokes thought on the manpower it would’ve taken to accomplish such a feat, showing the capability and ingenuity of the traditional people of the time. 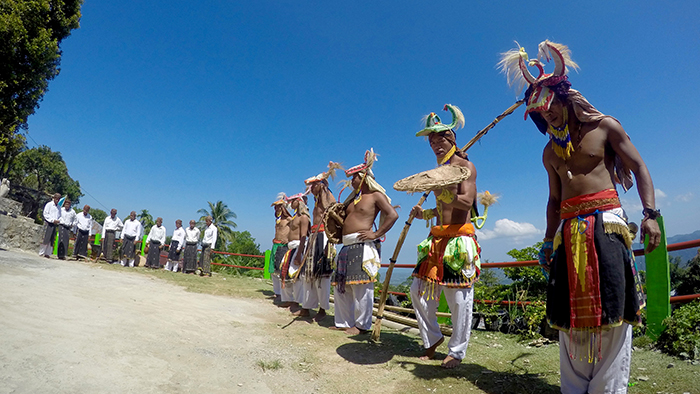 Tradition is at the forefront of Indonesia culture, and so it has been well observed and sustained throughout the years. I had the good fortune of visiting a number of cultural and traditional sites, including temples, villages and heritage sites. One of the most breath-taking temples was Uluwatu Temple. Situated on the very edge of a cliff, this magical site brings thousands of tourists from around the world every year to admire the temple and it’s grand views. Leading up to the main temple, there is a path running along the edge of the cliff, allowing you to peer down to the waves crashing against the face of the cliff hundreds of meters below. It is almost trance-inducing, standing on the edge of the cliff and staring out into the horizon. During our time at this temple, we attended a traditional dance; known to the locals as the ‘Kecak’ dance – which involved tens of people, elaborate costumes, and lots of fire. 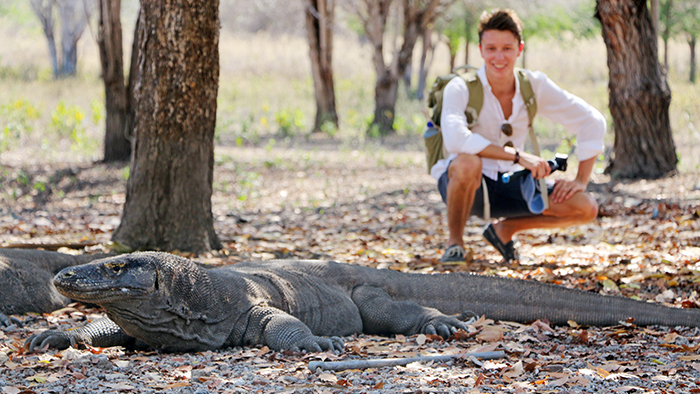 Our next cultural destination was a heritage site known as Garuda WisnuKencana National Park. Having arrived early in the morning, the park was almost empty – and good thing we did, as it revealed the size and scope of the site. The park was made up of a massive rectangular courtyard surrounded by colossal pieces of rock, carved into mysteriously straight-edged cubes. At either end of the rectangular courtyard were statues – smallon one end, and on the other end was a huge statue of ‘Garudua’ a mythical creature integral to Indonesian culture. Our third and final cultural stop was in a village high up in the mountains on the Island of Flores. We were welcomed outside the communal area by the leaders of the village and then were lead into a courtyard which over looked the entire island. The people of the village were very warm and hospitable, and offered us all a traditional drink. As we sipped our welcoming gifts, six men dressed in traditional costume began an age-old performance in the courtyard. For someone watching who didn’t know what to expect, it was certainly a spectacular performance.

As you can see, Indonesia is not just a beach holiday, nor is it just a place to relax – it’s both of those things, and so much more! Surf, relax, learn, hike, dine, sail, and anything else you can think of – it’s all possible. Thousands of islands make up this diverse country, all of which are different from the last – so pick one, pick five or pick twelve!Experience your adventure – because in Indonesia, there’s an island for everyone.