In his penultimate episode of the Druk Path Diaries, Fahd Abu Aisha completes his trek and discovers more about the history and culture of Bhutan. 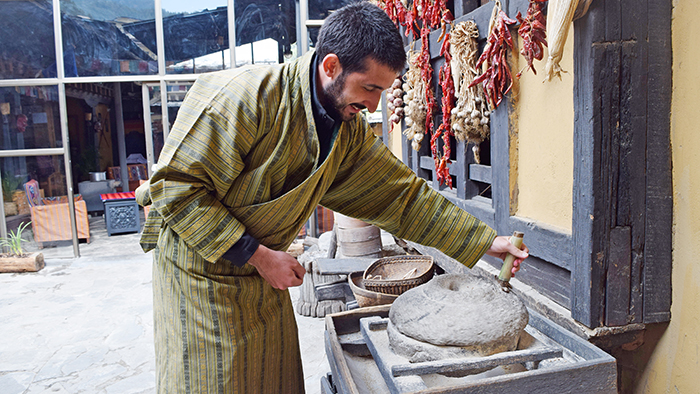 Day 6, November 4th: Takin and Karaoke
Morning couldn’t come sooner. By the time it had I was exhausted, yet ultimately relieved that it deigned to arrive. Finally, I thought, the last trek day, and then I would be sleeping comfortably under blankets in a heated room with a solid roof.

The monk had requested we have breakfast in his home; seated next to the radiator. It was a welcome start to the day following a horrific night. We packed our gear but before departing the monk took us into the monastery he looked after. It was a small and quaint sanctuary but beautiful nonetheless; with skillful wood carvings and majestic altars. I made a little prayer for the monk, thanking him for his hospitality as well as the three musketeers (Tashi, Chef and the Horseman) who had taken extremely good care of me throughout this adventure. We then proceeded downhill.

We enjoyed a soothing stroll as we passed through the various temples of the stunning Phajoding Monastery. The structures are ancient and many of them are under renovation, propped up by extensive support beams. The beams were put into place following the tremors of the Nepalese earthquake in April 2015, whose waves extended all the way to the Bhutan.

We continued further downhill with the city of Thimpu sprawled in the valley ahead of us, getting larger and larger with every step we took. An hour later we had reached the end of the trail, signaled only by a little indistinct sign pointing upwards: Phajoding Monastery 2hrs. I was ecstatic. I had endured some pretty harsh conditions (by my standards) and made it to the end in one piece. I thanked the chef and horseman for all their assistance as they unloaded our bags into the car waiting for us, only to leave me taken aback, when they mentioned that they would be heading back up the trail and to Paro again! It is illegal to transport or ride the horses by road. The chef chortled softly saying he knew all the shortcuts and would be back home in two days. If only he had shared some of that knowledge with us – I would have had two additional warmer nights. 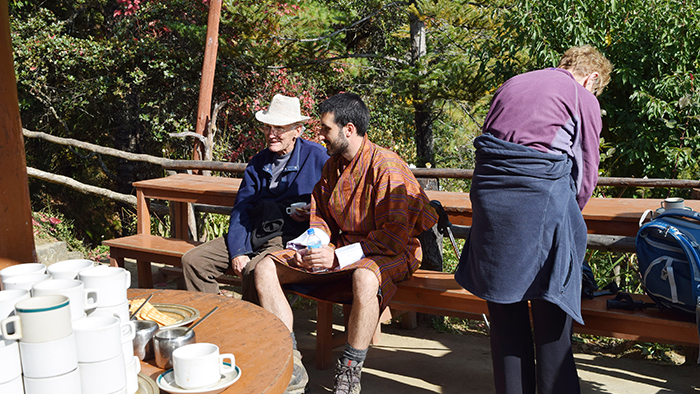 Before we arrived at our hotel in the capital, we visited the Takin reserve. The Takin is Bhutan’s national animal, an endangered species, hence the need to build a massive enclosed national park to preserve them. They are peculiar looking creatures I haven’t come across in any documentary or nature magazine before. They hail from the family of antelopes but have the head of a goat and body of a cow. With the same fascinated stare I had as a child when I saw a giraffe for the first time, I watched these creatures feeding on the leaves and lounging around in the shade. The novelty of seeing these magnificently unique creatures wore off eventually while they carried out mundane yet envious activities comprised mainly of eating and sunbathing.

After heading to the hotel, I got dressed in fresh clothes and left with Tashi to explore the delights of the capital.Our first activity was to get a national robe – also known as the Gho, tailored for me, which I had intended to wear at the Tiger’s Nest Monastery on the final day. It is a knee-length robe resembling a kimono somewhat that is tied at the waist by a traditional multi-coloured belt known as a Kera. The girls in the store giggled away as the tailor tucked and twisted the robe countless times around me before she was satisfied with the fit and declared me fit to pass for a foreigner instead of a cringing tourist. That was good enough for me. 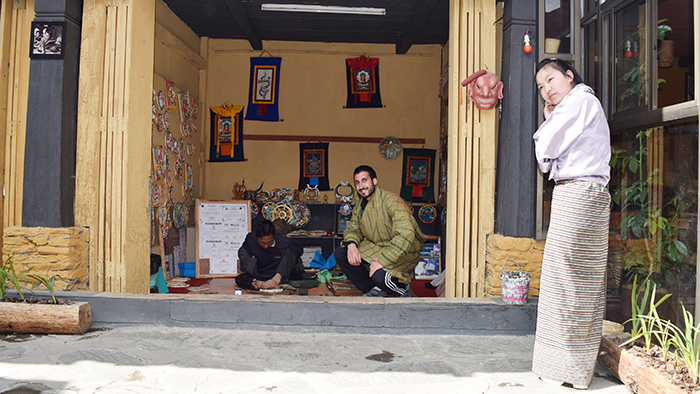 A savoury dinner followed at the hotel before Tashi insisted on taking me out on the town, to which I happily obliged. It was a busy night of karaoke with the bar filled to the brim. We nestled into a corner and started flicking through the catalogue looking for some tunes to ruin. However, we all got cold feet as one Bhutanese Sam Smith replaced another on the stage to ovation after ovation.

It became evident the Bhutanese took their karaoke very seriously and I wasn’t sure how they would react to some big nosed tourist destroying Owl City’s ‘Fireflies’. Instead we enjoyed the performances of the singers and headed back to the hotel to hibernate for the night. 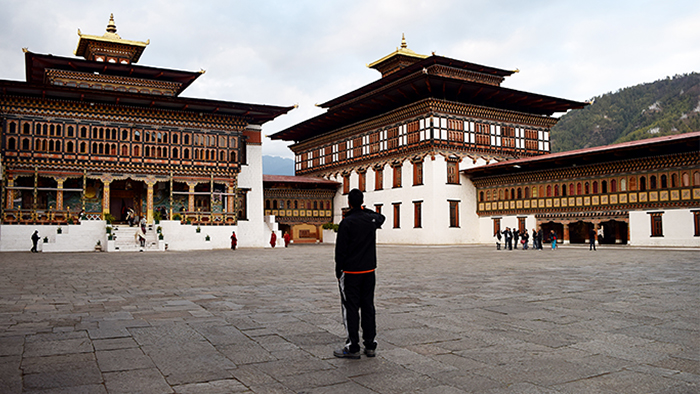 Day 7, November 5th: A History Lesson
After a quick breakfast in the hotel restaurant, Tashi and the driver collected my gear and off we went for a cultural and historical tour of the city before we drove back to Paro for the night. The first of the many sights we would stop at throughout the day was the most jaw dropping.

Perched on a hill guarding over the city lay the world’s largest and tallest statue of Lord Buddha. The figure, made entirely out of bronze and standing at 189sqft (51m), may very well become the 8th wonder of the world when it is complete in two years. It left me speechless; truly a sight to behold. I stood rooted to the spot for at least 15 minutes, admiring the workmanship of the statue’s impeccable detail and design. The devotion of Lord Buddha’s followers to honor him in such a way felt incredibly awe inspiring.

The ‘Memorial Chorten’ was arranged by the Queen Mother to commemorate the 3rd King of Bhutan; King JigmeDorjiWangchuck (pronounced: Whang-chook).The site was packed with civilians and monks alike circling the memorial. Like a born again Buddhist I followed suit, circling three times. The purpose is to give ourselves ‘extra merit’ for our next life but only if we remained good people and faithful to our souls, similar to circling the Kaaba. I had reached a certain level of clarity by this point; the Bhutanese perception of life and their culture to continuously strive to be good to themselves, to one another and their environment is something we should all work towards attaining. 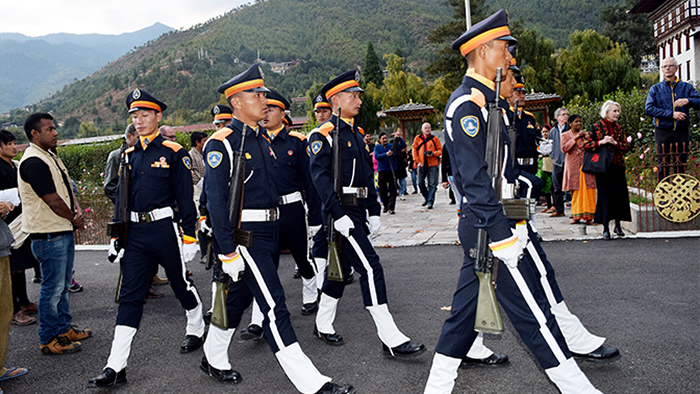 A short drive later and we visited the Youth Development Fund; a social project created to encourage the Bhutanese youth to maintain a healthy and active lifestyle, and to pursue their passion with the facilities in place to assist them (similar to a youth summer camp). Within the establishment was the ‘Living Bhutan’ Museum, which was a short but concise tour on Bhutanese culture.

I then saw something incredible; a man sat carving designs into wood and painting them, solely using his feet. After watching this amazing feat (pun intended),I was requested to engage in a game of Bhutanese darts, which had the same objective as normal darts except that they were shaped like missiles. I launched the first two which landed above the board and the third missile barely stuck onto the outer ring. It was a poor show.

Our final stop before we left for Paro was the National Library of Bhutan, which, unbeknownst to me until that moment, holds the Guinness World Record for the largest book in the world. It is 5ft high, containing stunning high-resolution pictures of Bhutan. Dotted around the library walls were images of the 5 kings of Bhutan – a trek through its monarchal history. The first King of Bhutan, (UgyenWangchuck) stood with his posse of guards decked out in the official royal armor, flaunting his missing his left hand (which he had lost in a battle.) The third King (whose memorial we had visited earlier) stood proudly next to the soon to be assassinated there after Indian Prime Minister Rajiv Gandhi. Tashi added that they were very close friends and the King was devastated when the Tamil Tigers had killed him. 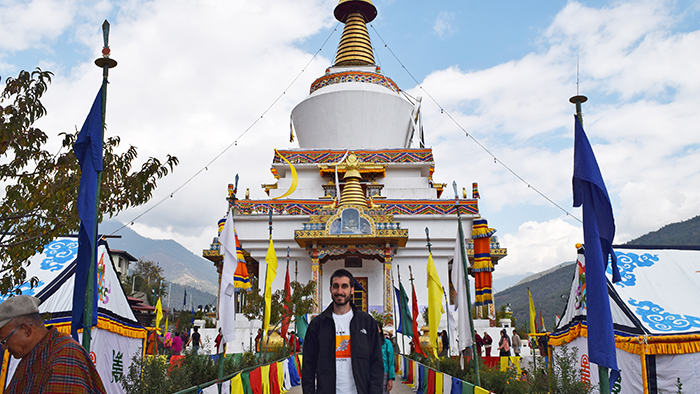 As we drove on the highway back to Paro, I saw the first ever monastery to be built in Bhutan out of my window, constructed in 1629. One distinct difference this temple had compared to the others, according to Tashi, was that its floors were made entirely out of stone presumably from the gigantic boulder it was built on. The name of the Monastery is “SimtokhaDzong”- meaning ‘On Top of a Witch’. The belief is that the witch remains alive and well, trapped under there to this day.

We continued our drive swerving through the mountain range and eventually under the first and only flyover in the country. I immediately noticed the extensive road works taking place that will soon change the country’s landscape. Too soon I fear.

It took us an hour to reach the 4th largest city of Paro, before I was to return to the same lodge I had spent my first night. Tashi took me to see the first ever monastery built in Paro. This temple was the first of a smattering of 108 temples that were built in a single night across the country to defeat the giant ogres who were suppressing the spread of Buddhism in the land. It was a magical way to cap off the evening and get a good night’s rest for the final hike to Bhutan’s ‘Pyramids of Giza’ Paro Taktsong or more commonly known as The Tiger’s Nest Monastery.