In part two of his journey on the Druk Path Trek, Fahd Abu Aisha discovers that yaks aren’t necessarily to be trusted…

Day 3, November 1st: The Land of the Thunder Dragon
I woke up numb and sore, having slept in a breached fetal position all night. 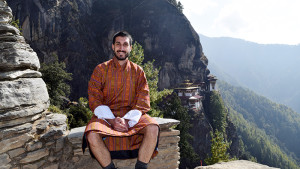 The sun was scorching our campsite, in contrast to the Arctic conditions encumbering us throughout the night. I enjoyed an outdoor breakfast while glowing rays kissed the snowy peaks of the mountains – a picturesque view. We cleared up our tents and made our way back up to the monastery to continue the trail beyond the monk’s hut.
The hike was relatively short. We traversed up and down slopes through the forest for a few hours before we walked out on an open plain, delighted to happen upon our chef who had prepared lunch for us. It was there where I met Frank and Nancy again (the San Franciscan couple) and we picked up where we left off; sharing strategies on how to keep warm during the freezing nights.

With only one hour of hiking left to reach our next destination, I took my time finishing my lunch as it was only noon. I explored the ‘lunch site’ longer than usual in an effort to kill time in a productive and prudent manner. By then our chef and horseman had already made for the second camp, so Tashi and I bid our adieus to Frank and Nancy once more and we tried to catch up with our dynamic Chef/Horseman.

Tashi was not sure what their chef meant by ‘next camp’. It was still early but reaching tomorrow night’s camp was going to be cutting it too close to make it in time before sunset. We continued our walk again into more forest; this time the atmosphere took on a darker, more ominous tone as tall skeletal trees hung lifelessly around us. 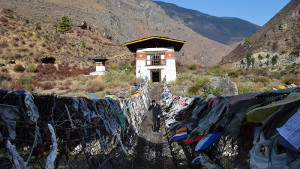 Tashi mused how ‘it would be the perfect horror setting for a movie.’ I responded nervously with a high-pitched giggle.

We walked for another half hour. As nonchalant and experienced Tashi was, I began to feel even he was getting anxious. Perturbed, I peered into the distance through the branches fretfully. With what sounded like a combination between a wail, a choked sob and a massive sigh of relief, he stopped to show me an arrow pointing forward drawn into the mud, confirming we were moving in the right direction. Sure enough, we walked out onto yet another open plain and 5 minutes later were surrounded by mountains, where the main camp lay.

Out of nowhere a massive cloud lumbered across the sky and hovered over us expectantly. A pregnant pause later it emitted the roar of the thunder dragon and began to pour down sacks of rain. We took shelter inside the main camp and waited for the rain to subside. We were the only people within a 20km radius.There was not much more I could ask for, seated with a warm cup of tea, and a view to die for. 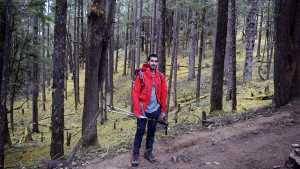 Day 4, November 2nd: The Yak Crossing
It had poured heavily the night before, the raindrops beating violently against my tent. The pitter-patter on the roof soon became white noise to me and I slept soundly throughout, blocking out the impending knowledge that the heavy, hell soaked night would have devastating results on today’s hiking path.

My memory of today’s surroundings is a bit hazy, so entrenched with mud was the path, that I focused all my concentration on getting one foot successfully in front of the other. It is no exaggeration to say that it was impossible to navigate the route if you had not already done it before, as the trail was obscured by all the sludge. I had not done it before, so naturally I was the damsel in distress of the crew.

We faced our first real obstacle on the trek when we came upon a rushing river we needed to cross in order to continue our ascent. Due to the high winds and poor weather the night before, the make-shift bridge built for commuters had been blown away. My bridge building skills not intact, Tashi insisted we turn back into the forest to find another way across.

Tashi scurried ahead of me trying to find an alternative route, and for the first time he was out of my sight for a few seconds. A twinge of panic set in. There were at least four potential footpaths that led in different directions from where I was standing. Thankfully before I had time to soil my last remaining pair of clean underpants, Tashi popped out of the trees with a victorious war cry, revealing he had found another way across. 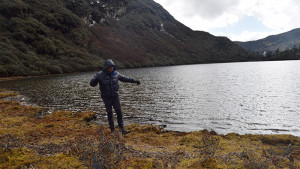 As we walked down this newly discovered trail to the river, Tashi stopped in his tracks and signaled for me to move back: ahead stood 4 beastly yaks. Curiously blinking at us, they staunchly remained guarded in front of the river we needed to cross. Tashi whispered that despite these being domesticated yaks, they could be highly aggressive if provoked. They could run up to speeds of 40km/h so there was no way we were going to make a quick escape. Whilst assessing the situation,Tashi, in an attempt to relieve the tension, told me a funny local tale about The Yak: Centuries ago, the yak and buffalo were best friends. Back then; it was the buffalo that was the hairy creature and not the yak. One day the yak asked the buffalo if he could borrow his hair as he was travelling to Tibet and the climate was much colder, to which the buffalo happily obliged. The yak, all dressed up in his hairy new get-up made for Tibet, and as the story goes, never came back. Until this day in Bhutan, when the buffalos do not have their heads down grazing the land or sleeping they are always looking north wondering when their friend the yak would return. Sneaky yak.

As much as this story did lighten the mood, it made me more cautious and distrustful of them. Tashi warned me not to look them in the eye, as it may feel like we are challenging them, and then we would really be in trouble. However, we needed to get behind them to cross the river. We approached them slowly, particularly the alpha male who didn’t take his eyes off of us and the only one standing directly in our path. Another two slow steps toward him and he started toward us. Tashi shouted to jump left, and without hesitation, we lunged onto the low hanging branches of the trees like frantic koala bears then swung onto the massive boulders that were anchored into the gushing river. The yak let out a snicker and turned away; content he had won the duel. 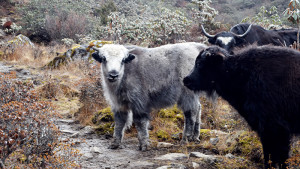 We hopped from boulder to boulder, doing our best to avoid falling into the river, where the current would have swept us further downstream. The boulders were more like mini islands so the challenge was not death defying but still challenging. We had finally made it across the river behind the yaks. I didn’t like them anymore.

And so we continued up the trail, with the river flowing downstream adjacent to us. As we climbed out over the trees, we reached a flat platform where the water flowed over the cliff and into the river (a mini waterfall of sorts). The view overlooking the valley was mesmerizing. Five more minutes of climbing over the cliff and we had reached our destination – the shores of a massive lake randomly created so high up there and girdled in by 3 gargantuan mountains. Tashi would eventually explain that the water from the glaciers of those mountains would form the lake, which in turn, would spill over the cliff and into the valley to form the river we had just trailed up against. It was a truly a sight to behold as we stood alone, appraising the magnificence.

The government had placed a lot of trout in the lake to stimulate the habitat and Tashi thought it would be a good idea to try our luck at DIY fishing.

Using a bundle of yak hair (NOT plucked from our old friend’s backside) as a fishing line, he bent the pin we used to hold the sleeping bags together as a hook topped with a small piece of chicken that we were originally going to have for dinner. It ended abysmally and almost as quickly as it started. There were no takers for our now sopping, soaked chicken.

By the time we conceded that we weren’t having a lush, gourmet seafood feast for dinner, the sun vanished behind the clouds and the wonderful unpredictable Bhutanese weather struck again. As the cold bit down on my spine and legs I fled to my tent to change into heavier clothing.

The seasoned chef and horseman had pre-empted this sudden weather change and disappeared out of sight to look for firewood, which they found. We sought out a cozy spot in a cave under one of the mountains, away from the rain. Tashi warned me that this would be the coldest night we would face. I prayed I would be able to sleep through it.