Crokango, or the Deadly Kiss of the Tigerfish

The Bivouac
The second part of our trip consisted in fishing from a camp located several hours from Guma Lagoon by boat, far from civilization, mobile phones, internet etc. The three tents were prepared the day before by Guy’s men and we realized that the logistics required to set up such an expedition is impressive.

The first night we all sat before the fire. While everything was calm again and the land gently breathed before entering the twilight, the sight of juvenile tigerfish hunts aroused our enthusiasm. We rushed to catch them, got some bites and lost a few lures. Before that Guy advised us to get closer. “In broad daylight a lion is afraid of you, at night, it’s not the same story.” Later, the case of hippos was also discussed, Guy reminding us that in this place the law of the jungle applies and asking us to avoid arousing their delicate sensibilities with our lures. 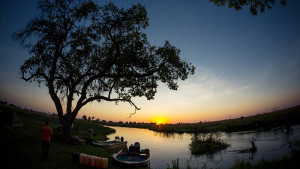 Our enthusiasm was not diminished by these words of wisdom: after eating we decided by mutual agreement to fish for catfish using the remains of the barbecue as baits: ten furious catfish were caught within 10 minutes of which a good one around 9kg, our biggest fish of the stay. We were surprised at the speed with which they are able to detect the slightest whiff of anything that might be eaten. It was only at that moment that we have agreed to join our tent under the roar of the hippos and the sneer of the hyenas.

Fishing quality was substantially identical to that of the Guma Lagoon. Many tigers were captured, with a 4.5kg record. When there were no catfish runs we fished the borders with lures or used bream fillet.

The tigerfish are willing scavengers, live bait fishing is therefore very productive. Many bites are due to small fish nibbling the bait permanently. To satisfy our curiosity, we have captured some leaving a small hook to hang at the end of our lines. Among the strangest species, we met Synodontis macrostigma, a yellow catfish with black points. Its uniqueness is that it spends most of its time swimming on the back as we have observed later in the large aquarium that sits in the middle of the lodge.

The presence of these small fish balls circling endlessly around our bait has an advantage: the attention of tigerfish is inevitably attracted and their usual mistrust seemed to disappear with food competition effect. Outside the period of catfish run, live bait is clearly the most effective technique and one can reasonably expect to capture five fish in one morning. The good spots are the series of corners. These are prime location for opportunistic fishtiger that stand there, waiting in the quiet parts, on the lookout for anything arriving fast, like a baitfish that lost control of its speed.

On the last day, at dawn, we had the chance to go for a mini-safari on the water. As soon as we got out swampy areas we saw a beautiful lioness, elegant predator of the savannah. A little further was a warthog who shyly showed the tip of his defenses before trotting briskly toward us. The sound of two squabbling baboons made it stop short and turn back. In the minutes that followed we observed a peaceful herd of elephants, surrounded by fearful antelopes, ready to scamper at the slightest sign of danger. Finally, we encountered a hippopotamus in a narrow channel which has forced us to end this magical ride and to initiate our return to civilization. 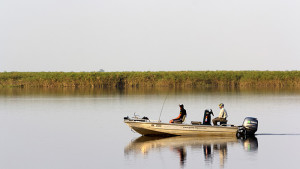 Fishing Techniques
Many species are present in the delta and it is possible to catch them in many ways depending on the conditions encountered. That is why we advise you to take several combos. Note that if something goes wrong, a shop is available at the camp, providing lures, rods, hooks and small equipment at reasonable prices.

For bream fishing: a light or medium spinning combo, to cast far. The silver spinners (Mepps) in size #3 or #4 work wonderfully when propelled far and brought back smoothly.

We gradually swapped our spoons for other lures (small crank baits from well-known Japanese brands) but did not obtain better results. A steel leader (20lbs) is recommended because many juvenile tigerfish live close to the breams, ready to sever the lines. 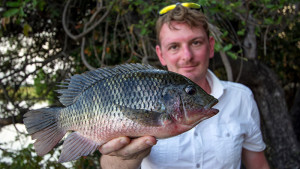 For tigerfish fishing with live bait: a robust spinning combo is good. Because big fish can be captured and you do not want to lose them: 20/30lbs regular/fast action rod, a reel equivalent to a 4000/5000 Stella, 45lbs braided line, 40lbs steel leader, good size circle hooks. Keep the line slightly relaxed, and the rod in your hand in order to feel the bites then wait for a frank departure and strike.

For catfish-runs: casting is better; 20/30lbs rod, fast action with a reel size 200, 30 to 45lbs braided line. Spinning is possible, but less effective because it does not to animate the lure and strike as quickly. Lures that work best are the bucktail jigs (3/4 to 1oz): cast near the border, wait to be at the bottom and then animate rapidly being ready to strike at any time. Attacks typically occur when you do not expect it. The number of lost fish is important (only one tigerfish out of four is landed) but there are many bites.

Finally, fly fishing is practiced at Guma when the waters are crystal clear. Guy personally takes care of the fly fishers, guiding them at the junction of two rivers. He explained to us that the technique was then to let the fly sink and follow the bottom waiting for the deadly kiss of a tigerfish.

Some usual recommendations for Botswana: protect yourself from the sun with a Buff, long sleeves, pants, hydrate a lot with water, of fruit juice. The dehydration cases are common, bring rehydration solutions to renew the mineral salts that the body has lost due to excessive sweating. 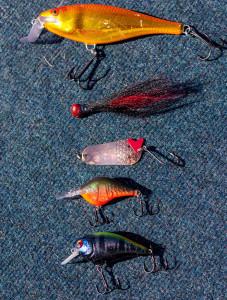 Conclusion
The Guma Lagoon lodge is a little gem and we recommend it to the readers, eager to catch a good tigerfish while completing their list of species. Tigerfish are numerous, combative, and can be caught with tilapia fillet without much difficulty outside the period of catfish run. A very positive point is the opportunity to practice bream fishing, as fun as relaxing, right outside the lodge. Regarding the diversity of species, we have established a list of everything we caught:

Other species are present, including the splendid Nembwe. It is an emerald colored cichlid whose fins vary from yellow to orange forming an unforgettable trophy for the exotic fisherman.
In the middle of our stay, we granted to ourselves a day of rest that was dedicated to the African pikefish in two small lakes near the camp. We had many attacks but we were unable to catch any fish and add it to our collection of species.

The lodge offers another important advantage: families are welcome. Fishing is clearly not the first business and it is for example possible to fly over the delta by plane, to participate in an expedition to observe birds, or simply sit on the terrace with a good book and a glass of wine enjoying the view.

The discovery of the heart of the delta by Mokoro, long canoes designed from a large tree trunk is very interesting. Two people sit on board and let themselves be lead by the pilot, standing at the back and using a long pole to steer the boat. Very stable, moving silently on the wave, the Mokoro is the best ally of the wildlife photographer. But it is above all the ancestral mode of transport of the inhabitants of the Okavango, the Bayei and Banoka with which these peoples used to hunt hippos.

The offered meals are excellent, rooms are comfortable, the availability of WIFI network is acceptable. Boats are Canadian aluminium hulls arranged like bass boats, some with an echo sounder (200HP engine for the bigger boat, 60HP for others).