In search of Tarpon in Bocas del Toro, Panama

An archipelago of over 68 islands and islets located on a coral reef surrounded by mangroves and lush tropical vegetation, Bocas del Toro is situated in the north-eastern part of Panama, and is an area known predominantly for its tourism. Until a few years ago, it was the location of the United Fruit Company, one of largest brands in the world trade of bananas. The island of Bastimentos, which is also one of the three national parks of Panama, hosts the only fishing lodge on the entire Atlantic coast of Panama, the Tranquilo Bay Lodge. 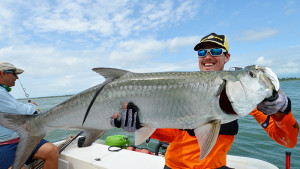 The Atlantic coast of Panama, as with other countries of Central America (Guatemala, Nicaragua, Costa Rica), is less known for its fishing compared with the great tradition of fishing in the Pacific Ocean, which as we know, is able to satisfy even the most remote angler’s dreams. The Atlantic coast that engulfs all of these countries is generally less populated and often constitutes a veritable kingdom of biodiversity, hosting the last rainforests of this region.

The pacific side is undoubtedly the most authentic and wild part of the country, where fishing also incorporates adventure, wildlife exploration and the tribal traditions of natives who still speak the Ngobe-Bugle language that they used before the arrival of Admiral Christopher Columbus in 1492. But above all, the Atlantic coast is one of the best spots in the world for Tarpon. 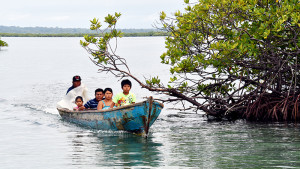 Tranquilo Bay is the result of a dream that many of us have: three friends; Jay Viola and Jim and Renee Kimball, decided, in the middle of their professional careers in Texas, that they didn’t want to grow old among the traffic, stress, and in the midst of skyscrapers. After a period of exploration in which they set aside as much money as possible, they discovered this little paradise and begin to build their home and then six cabanas in the middle of the forest, destined for their future guests. The lodge is completely environmentally friendly and independent, with generators, water treatment and ultrafiltration plants and even an antenna for the only contact with the “civilised” world (the Internet). The owners have collaborated with expert naturalists to offer guided tours in the forest, and promote ecotourism with activities dedicated to outdoor enthusiasts, such as water sports and fishing. Jay and Jim are fishing enthusiasts and avid anglers who normally guide every fishing trip, and they know the area incredibly well. 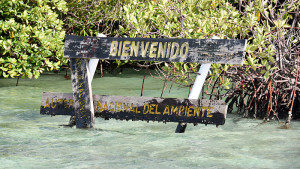 On this island, Bastimentos, begins our fishing adventure in Panama, with a project that aims to fish through the Panama Canal and both the Atlantic and Pacific Oceans in the same trip. The Atlantic Ocean extends from the coast of Senegal to the Congo and Angola in the east, and in the West the fish can be seen from North Carolina in the USA up to Bahia in Brazil, most specifically across the Gulf of Mexico and the Caribbean.

Species
The location offers many possibilities for fishing, from light tackle to deep fishing on drop offs. However, the house specialty is Tarpon fishing. The guys at Tranquilo Bay fishing practice this in front of several estuaries that are present in the area, in particular the Changuinola and Sixaola, as well as other rivers that flow directly into the ocean. Fishing in the estuary allows a good chance of catching with natural and artificial baits, even when inshore waters are crystal clear. Fly fishing is possible, but as I often point out, before coming here you have to understand that due to geographical conditions (you fish often at the feet of tropical forests) and also due to the weather, many times you’ll have to fish in blind casting, very different to what we usually see in the keys or Florida. 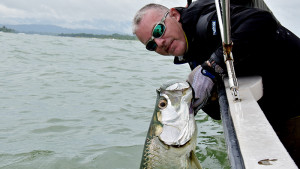 The Tarpon here reach a significant size, with specimens between 120-150 pounds being the most common. The Changuinola is also connected to the Almirante Bay through what is called “the first channel” of Panama, the Snyder. Later, the Crisis of Chiquita and especially the presence of a direct rail connection between the plantations and the Grand Panama Canal transformed the Snyder canal, and you can now see many endemic species and native animals and plants. Other species that you can fish together with Tarpons are Jack Crevalle, several species of sharks, (including Blacktip and Bullshark) and even the Hardhead saltwater catfish (Ariopsis felis). 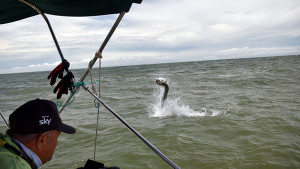 Close-up: The Tarpon (Megalopsatlanticus)
In 1847, the Tarpon was ranked in the Megalops genre, whose name derives from Greek and means “big eyes”, one of the salient features of the Tarpon. There is another species in
the genus, the Megalops cyprinoides, (Indo Pacific Tarpon), which reaches much smaller sizes. The silver King is the most common of the names attributed to Tarpon fishermen, due to the diffuse glow that it emits when jumping out of the water, thanks to the silver colour of its large scales.

Tarpon females can reach a length of over 2.4 meters and a weight of 355 pounds, while males are generally smaller (Crabtree, 1995). The tarpon males have a life span of about 30 years, while females can live for more than 50 years. For Tarpon stationed in inland waters, the typical silver colour with a back that appears dark blue or gray-green colour, changes to dark brown or even black. The only variable that seems to limit their habitat is the temperature, and various studies have shown that the Tarpon is definitely thermophilic. Rapid drops in temperature can cause large die-offs of tarpon. During these drops in temperature, the tarpon usually take refuge in warmer or deeper water, such as the Changuinola river and estuary.

Fishing techniques
The Tarpon is a fish that theoretically can be captured with different fishing techniques, with natural bait (live and dead, drifting or trolling) and artificial ones (trolling, spinning and fly).

The variables to be taken into account in the fishing of this species are different. First and foremost, the environment in which it is fished (depth, oxygenation, temperature and turbidity) and the fact that the anatomy of its mouth and its characteristic jumping and shaking of the head as open as possible to the gills to make volume (weight). These two variables have a major impact on the number of strikes. 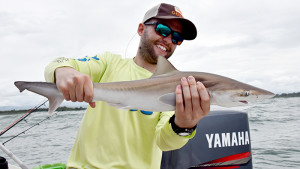 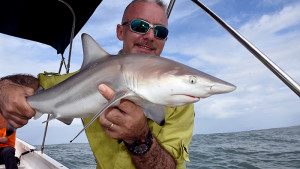 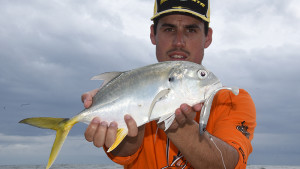 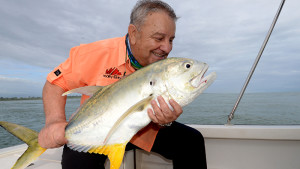 Jay and Jim have decades of experience, supported by similar experiences from their friends in Sierra Leone and Gabon. Using oversized Circle hooks (from 14/0 to 16/0), the Bastimentos guys have an impressive capture rate (almost 1:1) of fish that feed on the livebait. The curious thing is that the Tarpon were not hooked at the labial commissure as happens in almost all other fish (from billfishes to Tunas), but they are usually hooked in an almost irreversible way with the hook passing around the upper lip bone. Technically it is a very strange thing, and fishermen as well researchers spent considerable time trying to understand how this could happen. It is not a random thing as it occurs on 99% of the fish caught, and even seems not to be due to any particular technique implemented by the angler. The most plausible explanation, relates Jim, seems to be due to the fact that the Tarpon, once attached to the bait, try to swallow or spit out the bait, but thanks to the particular conformation of the circle hook, this only serves to rotate it on its axis and leaves it set in the position we have described. This technique, besides being very effective, is also eco-friendly, since fish caught with circles cannot swallow the bait (such as is the case with the J hooks). In addition, when cutting the barb, the release of the fish also becomes much more simple and safe, both for the fish and the anglers! 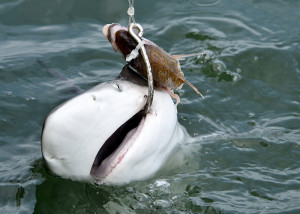 For the other species present in Bocas del Toro, lure casting is always a winning technique, otherwise in estuarine environment is good to consider that species that in other contexts feeds mainly in topwater (Jacks), frequently hunt in the deeper water layers, so best choice are often noisy minnow, bucktail jigs and softbaits generously sized.

Between colors, a classic in these conditions is black, ideal when there is poor visibility, as in the estuary, and even more so in these waters, where the river often after floods releases large amounts of a native cichlid blackish color, which once in contact with the ocean’s salt water, die slowly, thus constituting one of the prey (easier) for predators in the area, including Tarpon. The best times to fish in Bocas del Toro are from April and May and September til October, when the ocean is generally calm and there is an excellent fish activity. 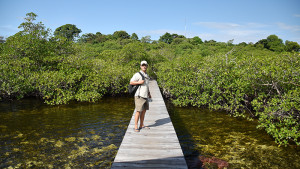 How to get there
Getting to Bocas del Toro is easier than other tropical destinations, with flights departing daily from Panama City (Albrook airport). There are several direct flights with Air Panama (www.airpanama.com). The guys at Tranquilo Bay Lodge will pick you up at the airport and take you to Bastimentos island (a short boat trip of 30 minutes). There are no special vaccinations required, and the Tranquilo Bay food is very good and also ‘Italian approved’!
For more information on the lodge you can visit their website (www.tranquilobay.com), while for further information about Panama and tourism in general it is recommended to visit the website of the Panama Tourism Board (www.visitpanama.com)