Ten Must Do Things in Armenia

Armenia, Georgia’s lesser known neighbor is making its presence felt through its layers of intriguing history and stunning landscapes. Bandana Jain undertook a power-packed, flavorful tour into this remarkable Caucasian hotspot that mesmerizes with a compelling blend of European and Asian heritage. 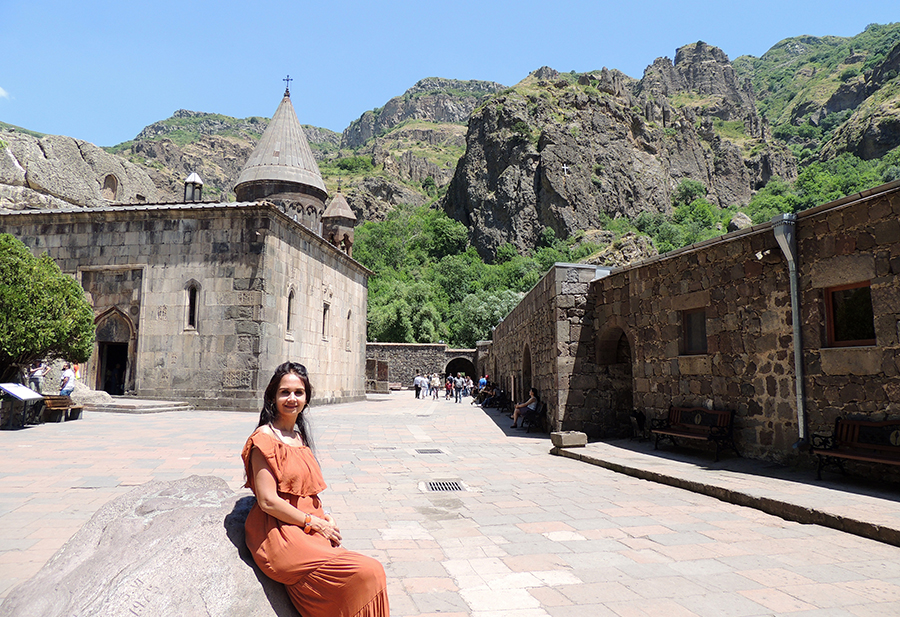 Armenia is a country small in size, yet big in character. It is an offbeat destination that is finally making its presence felt as a wondrous holiday destination. Bound by Turkey, Iran, Georgia and Azerbaijan, its rich culture, charming monasteries and medieval landmarks beckon increased number of tourists.

An incredibly old country with its 2800 year- old history (28 years older than Rome!) the country is drenched in history. It is packed with many unique historical and cultural attractions, that it is often dubbed as a ‘museum under the open sky’.

Dating back to the 8th century, Yerevan, the delightful Armenian capital is one of the oldest continuously inhabited cities in the world. The city as we are told, has developed phenomenally in the past decade resulting in hip restaurants, cafés, clubs, European style bars and hotels. Its wide, leafy boulevards are lined with cafés and wine bars where Armenians love to indulge late into the night. These mixed with the remnants of older days like the typical pink colored Soviet buildings, lend Yerevan a distinct appearance. You may not find any grand landmarks here, but it’s a great place to absorb the chilled-out vibes and familiarize yourself a bit with the country you are in.

Below are ten must do things in Armenia, which will surely make you want to return to this amazing country:

1. Tour up the Cascade
Counted as Yerevan’s key landmarks, the Cascade is a giant stairwell that sits right in the city centre and is definitely worth a visit. I never envisaged that the climb up the steps of Cascade would give us such a good workout. If one doesn’t want the climb, the good news is there are escalators. Whichever way you take, you will love this dramatic complex featuring monumental limestone tiers rising up from the tree-shaded park and cafe-abundant Tumayan Street. At the end of this climb, one can savour the beautiful city views and also soak up one of the most important collections of modern glass in the Swarowski Museum as well as nuggets of paintings, drawings and sculpture placed strategically on every tier. 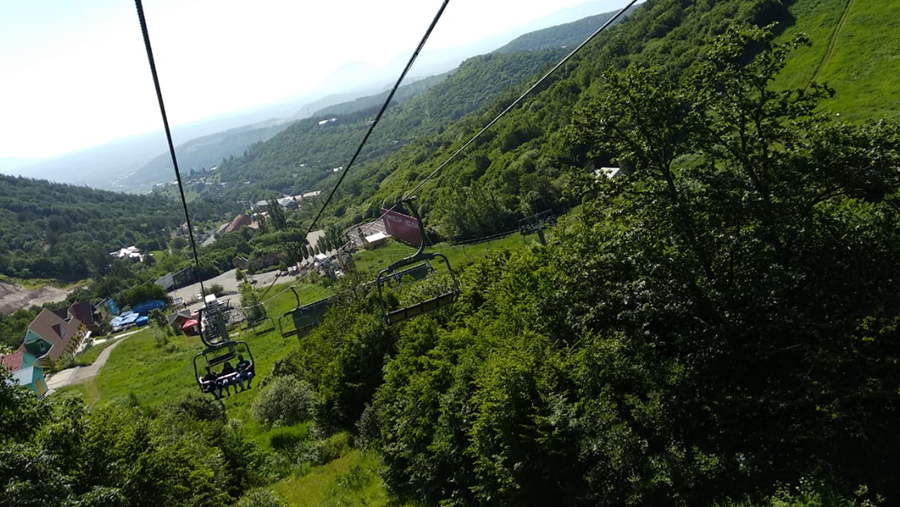 3. Relax at Republic Square
We made it to the famous Republic Square, a perfect place to relax among the soothing musical fountain characterized by great lighting. This massive fountain is supposedly the heart of Yerevan that bases its popularity on the ritualistic musical show from early spring to late fall— a great way to unwind at the end of the day and a sign of resilience to the harsh history and its resurgence from decades of chequered past.
Surrounded by Yerevan’s monumental rosy pink stone buildings, the magnificence of Republic Square can be felt both in the day and night.  Yerevan is often pegged as the ‘Pink City’ because of the colour of the stones used to build much of the city centre. The Square looks sombre and classy by the day and changes markedly in the dusk hours when it is all lit up to display its stunning musical fountain show. After enjoying this show, we strolled around lazily amongst its various lanes and by-lanes soaking in the beauty of the city centre. 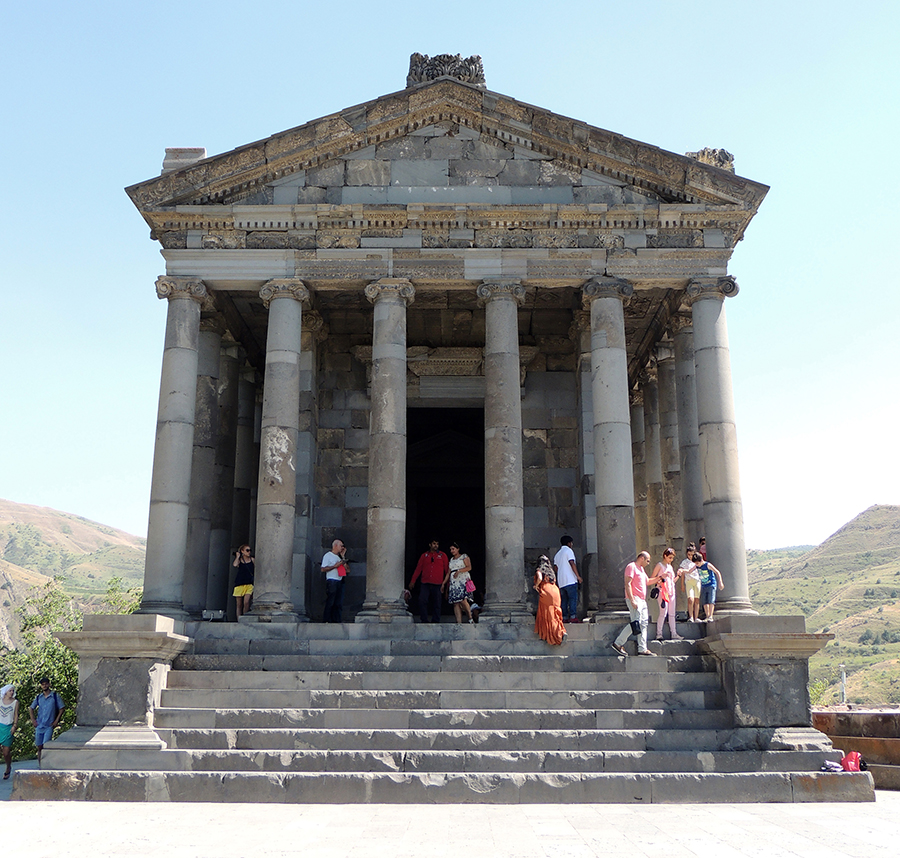 4. Take a cultural tour of Geghard monastery
Up a steep, cobbled road through an archway, past pine trees, this World Heritage-listed monastery is named after the lance said to have speared Christ’s flesh at the crucifixion. It is an architectural beauty as if planted in the midst of looming, densely forested cliffs.

Once inside the main church, which is protected by high walls, we are plunged into semi-darkness, which is figurative of its 800 year -old history. Devout Armenians were seen crossing themselves as they entered and lighting thin candles in a tray of sand. It is pitted with ancient cave chambers and monastic cells. It felt so old and there was a mysterious vibe to it as if stepping back in time. Somehow, I can well imagine this place surviving intact for another eight centuries.

Our guide Natasha told us that Armenia is home to countless beautiful monasteries and they are often found in areas of truly outstanding natural beauty.

Savour family hosted lunch on a cherry farm – For city dwellers like us, such experiences are far between and come as a refreshing change.A relaxed lunch under the shade of walnut and apricot trees as we witnessed a masterclass in the making of traditional bread called lavash. Lavash is a tasty flatbread that is the cornerstone of Armenian cuisine. It is interesting to know that it was placed on Unesco’s list of Intangible Cultural Heritage in 2014.

What followed was a delicious lunch with baingan bharta, boiled beans, seasoned legumes and loads of salad topped up with the freshly baked lavash.It made for a unique meal as our group pf thirty something sat on a huge table passing around the dishes as we reveled in the tasty food in countryside settings. The freshly-plucked cherries and sweetbread for dessert acted as the grand finale to this awesome, sumptuous lunch. This experience of having a family hosted lunch outdoors was a memory to cherish for lifetime. 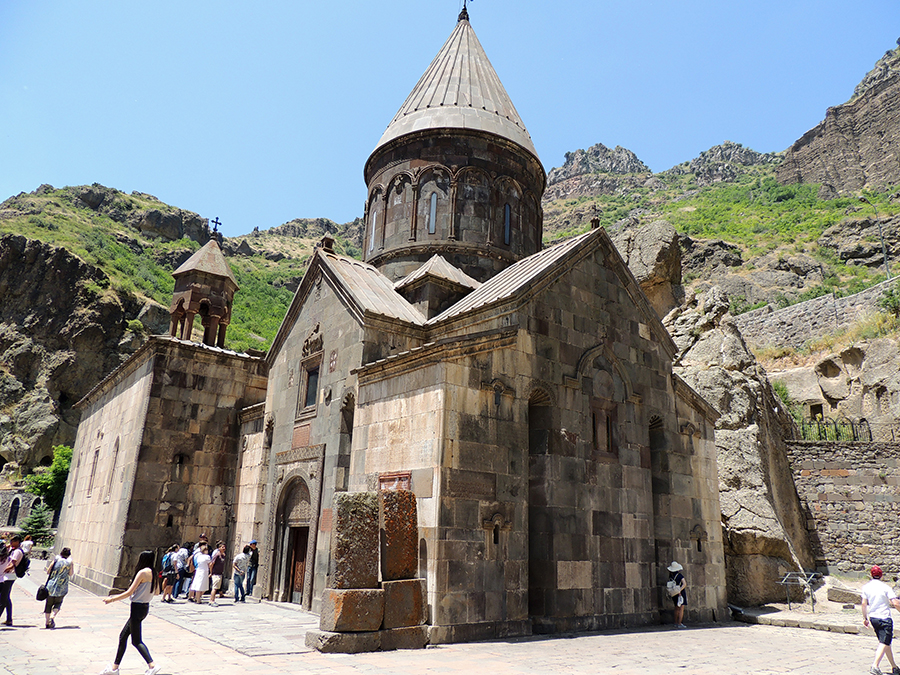 5. Drink in the beauty of UNESCO heritage site called Temple of Garni
As seen from a distance, it is an extraordinary Hellenic temple with a fascinating façade beautifully perched on at the lip of a spectacular gorge.
The Temple of Garni is a beautifully proportioned Greco-Roman temple believed to have been built in the 1st century AD. It was reduced to rubble by an earthquake in 1679 and rebuilt in the seventies. With magnificent surrounding views, I took time to drink in the beauty of this stunningly impressive temple while enjoying the searing vistas framed by the ever-blue sky. 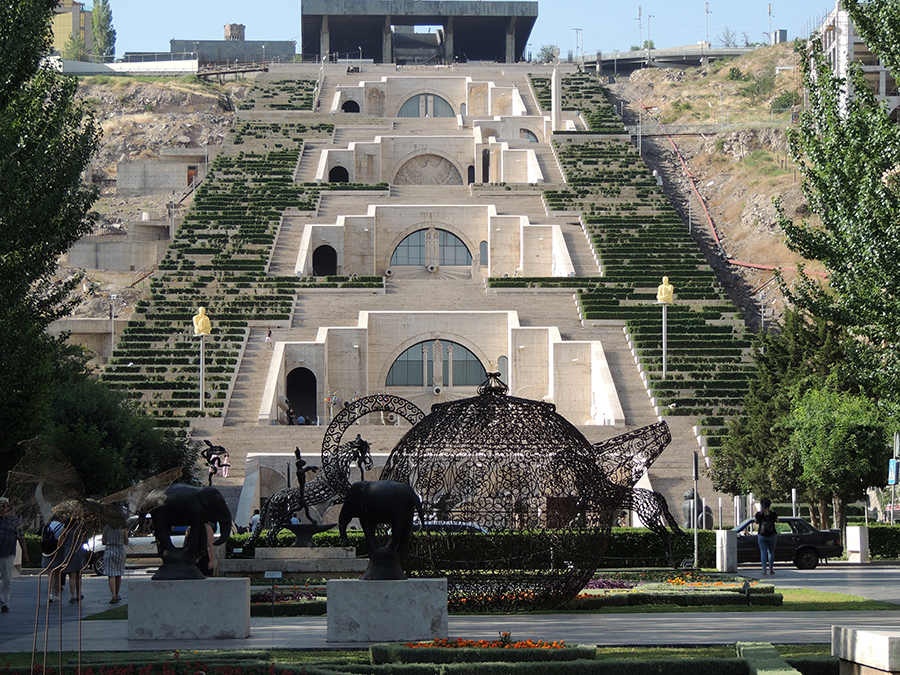 6. Shop till you drop at Vernassage Market
When our bus dropped us at the open-air Vernissage market, the art lover in me jumped liked a baby! A visit to this flea market was, by all means no less than a cultural tour. If I had left Yerevan without meandering through this artists’ paradise, I would have surely kicked myself.

Oozing with myriad stalls replete with ceramics, folk and contemporary art, rugs, textiles, jewellery and much more, it’s a must visit for every antique lover. The shops laden with artefacts, souvenirs, handicrafts, clothes, homeware were spoiling us for choice. We stuffed our bags with plenty of memorabilia and headed to explore Yerevan Mall and the bazaar on foot.

7. Explore Armenian countryside at Tsaghkadzor
A quaint ski town, which when translated means ‘valley of flowers’. Tsaghkadzor (don’t ask me how to pronounce it!) is quite a popular destination for Armenians in winter thanks to its ski centre on the slopes of Mount Tegenis. Featuring well-developed ski trails and great equipment, it is referred to as Armenia’s ‘winter wonderland’ by ski lovers.
We took a ride on the ropeway (open throughout the year) and soaked in a panoramic view of the valley beneath. Lovely flowers stood out in a myriad of hues. At this time of the year (in July), the grassy patches on the top were amazingly soothing and beautiful. 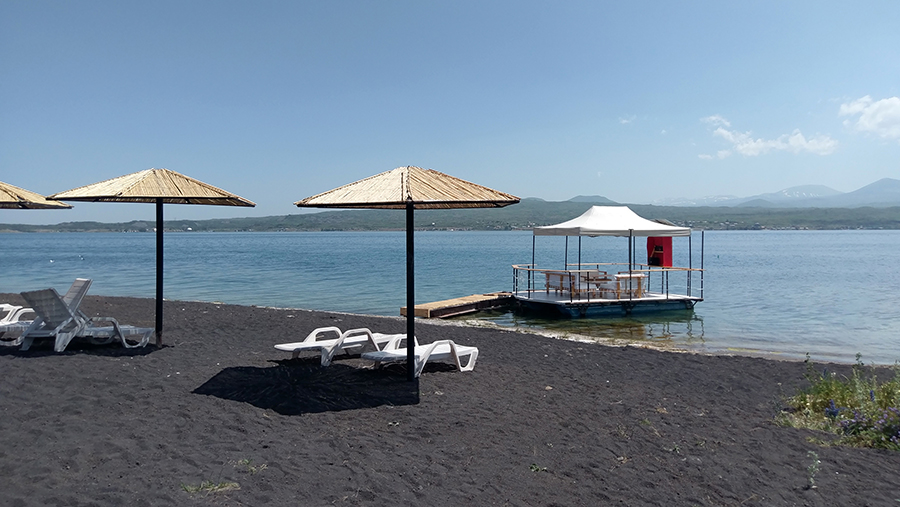 8. Revel in the beauty of breathtaking Lake Sevan
As we drove towards Lake Sevan, we could see the apricot orchards popping with Armenia’s bright yellow national fruit and the lush green vineyards laden with juicy bundles of grapes. Heading north past potato fields and farmlands and meadows of poppies we drove up the western shore of Lake Sevan, one of the largest high-altitude lakes in Eurasia. Its turquoise waters are supposedly, an important source for fishing, irrigation and hydroelectric power.

It is said that the beauty of azure Lake Sevan doesn’t leave anyone indifferent. So well said! It is one of the highest fresh water lakes in the world and the largest in the Caucasus. It was impossible not to admire the picturesque landscape surrounding the lake: hills covered with forests, rocky cliffs and grasslands turning into alpine meadows. 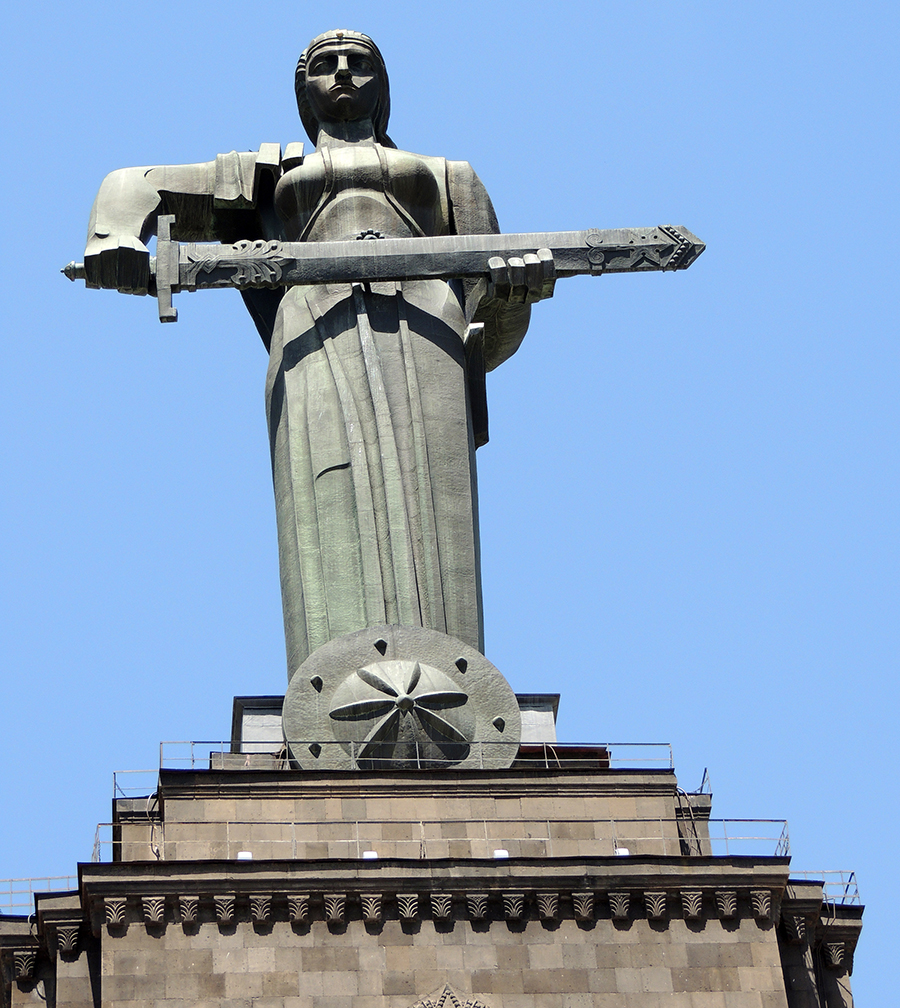 9. Enjoy Indian lunch prepared by Armenian hands
Chef Klara, who happens to be the official chef to Indian Embassy in Yerevan made us feel highly privilegedwhen she treated us to a sumptuous lunch on the shores of picturesque Lake Sevan. Everything from the starter to dessert was so delicious! We were left wondering that Chef Klara with her 12- year experience in Indian cooking had become a kind of master chef in Indian cuisine. With great humility, she came to greet us and we were overjoyed by her presence. Dressed in an elegant salwar kameez, she looked more of an Indian than Armenian. And to add to this quotient of delicious food, the food was served outdoors in tent by the lakeside. Overall, another experience to cherish for lifetime! 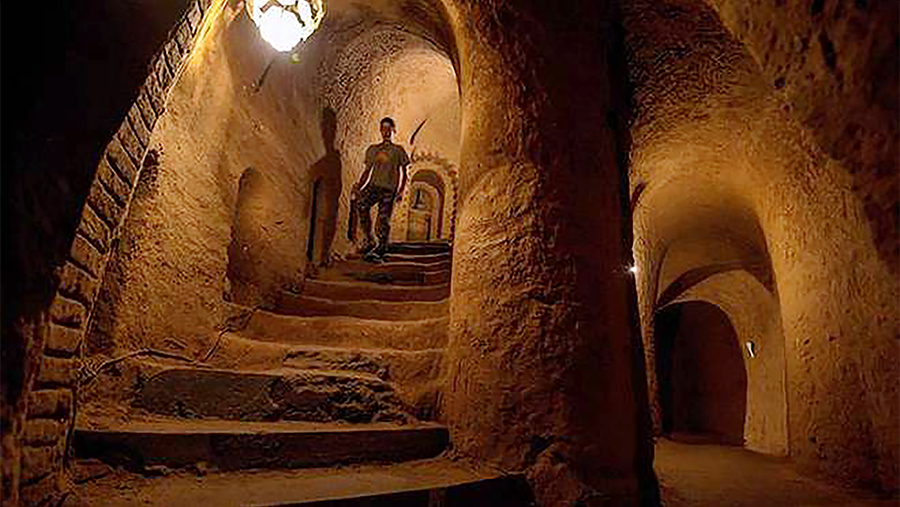 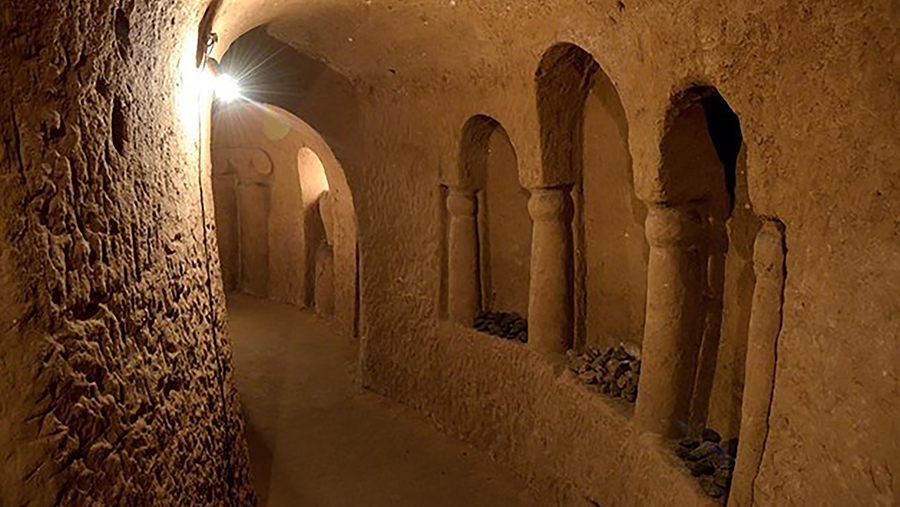 10. Explore Levon’s Divine Underground
A man-made delight albeit of an unusual kind, Levon’s Underground is a labour of 23 years of toil by Levon, when he was asked by his wife for a basement space for storing potatoes during winters. The resultant was in the form of series of stunningly dug caves. Levon is not alive today but his story of toil has been shaped into a museum that displays artefacts, pictures, and publications dedicated to his unstinting devotion to the caves. 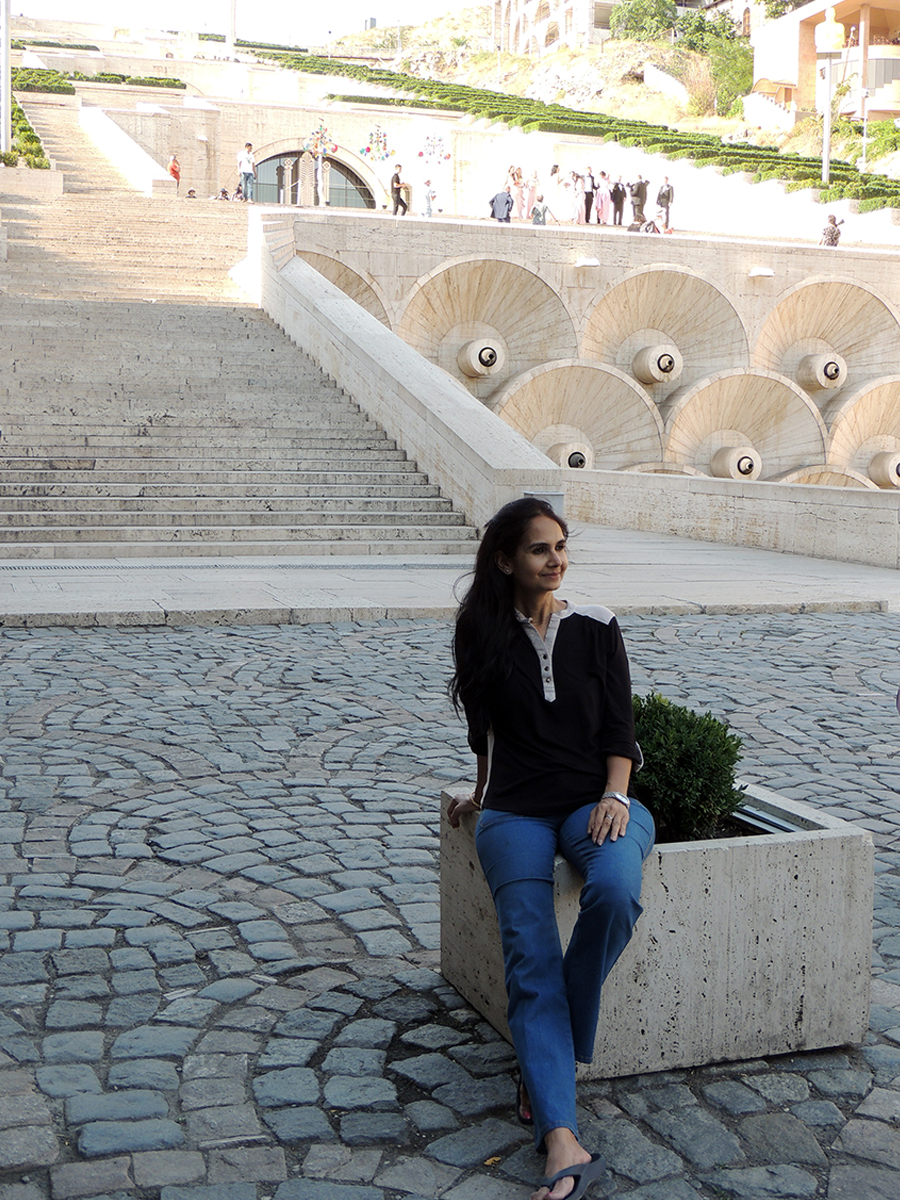 If asked for a candid review, Armenia surely won my heart despite the short amount of time we spent there-perhaps because of my innate love for unconventional places or my interest for places with energizing past. Its laid- back vibes, friendly people swept us off our feet. Defined by looming mountains and epic vistas punctuated by medieval time churches, the country offers an invigorating holiday experience! And not to forget the surprising delight of Yerevan, so exuberant and vibrant, yet tranquil and relaxing. It’s charming mix of tradition with modernity amazed me to no end. And above all, the exceptionally beautiful Armenian women with incredible features won our hearts! ■