This was a long-awaited event for the Discovered Trax team. We had heard about this event last December shortly after Raider arrived on the team. At that point we had just missed the 2015 event, plus Raider was too small and not ready to tackle the wadis. 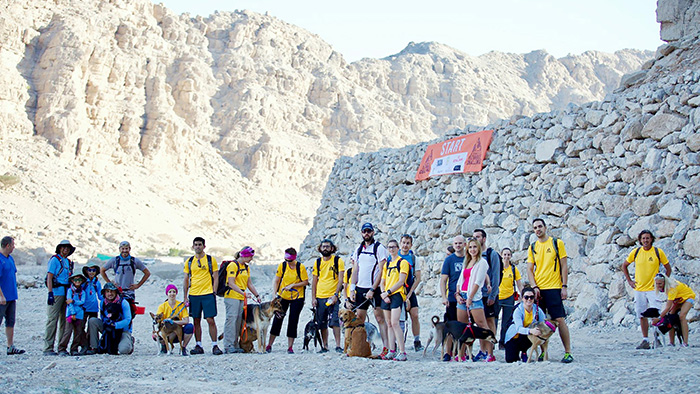 There was a bit of cloak & dagger secrecy around the event. We could not get any intel as to when or where it would be held in 2016 until it was finally announced several weeks before the event and the exact location was only communicated to the registered challengers the week before the event. The waiting and patience paid off however, and we were in for a treat as the event took place in a secluded wadi at the base of Jebal Jais not far from Wadi Bih. 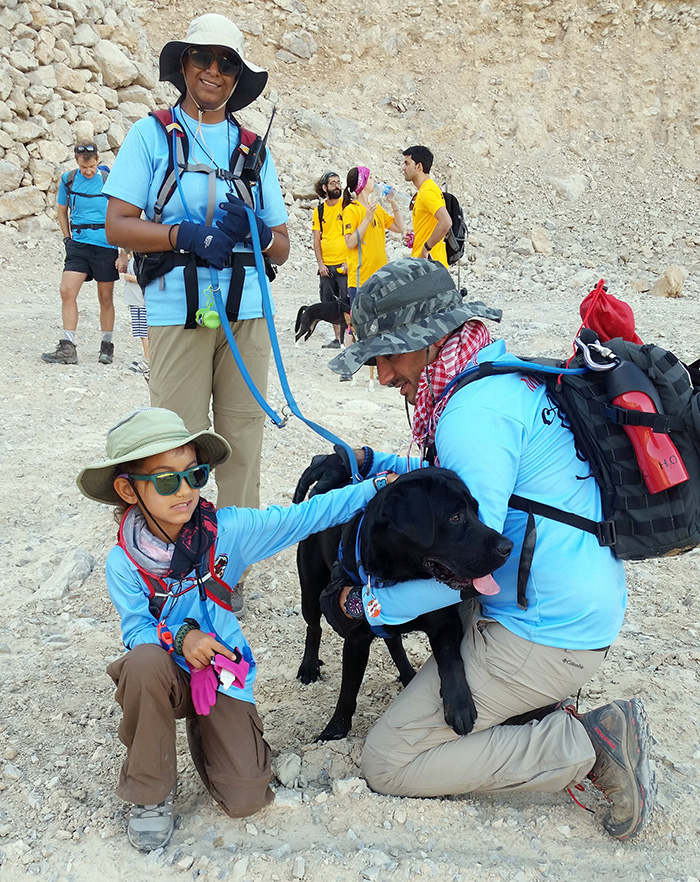 I do not know how many dogs there were at the event but I heard somewhere around one hundred or so. Then there were probably two or three times this number of people; it was a very well-attended event. Our wave departed the starting area at about 8:15a.m. We were the early birds and being first out of the gate had its advantages – namely the sun, or lack thereof. Even though it was nearly mid-November, the wadis and mountains can heat up during the day when the sun is at full peak and this can be torment for the dogs as they hustle around the rugged wadi bed. So getting an early start would guarantee us as much shade as possible. 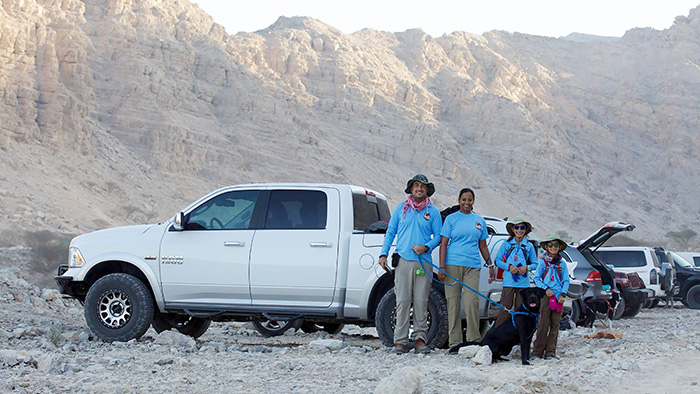 Raider is a very friendly and curious Black Labrador and at a ripe young age of 14 months he is as playful as one could get. By the time we were hiking into the wadi he was already panting as he had been chasing every dog around, playing with them, jumping on them, and making his usual hyper-friendly chit-chat. As most of the dogs made their way steadily up the wadi, Raider had other plans; he was so excited to be in a new environment that he took the opportunity to sniff out every inch of the wadi. He zigzagged left, right, up, down, and generally all around. His tail wagging incessantly let everyone know he was in doggy paradise. 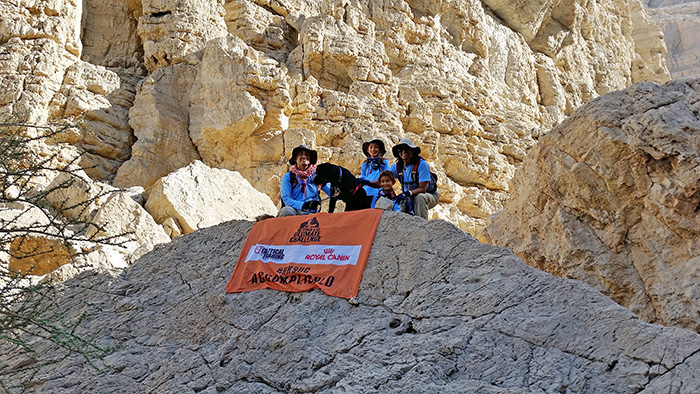 The dogs had to remain on their leashes which does hinder a dog from reaching his/her full potential while jumping and racing through the wild however, it was a necessary evil. With one hundred or so canines of different sizes, shapes, ages, and pedigree we needed to be able to try and keep some order to the chaos. Generally, we as humans try to get our dogs to behave civilly when out and about and we need to remember that at the end of the day they are dogs. So on this particular day, I think every dog owner was full of excitement to let their dogs be dogs! There was a lot of barking, yelping, chasing, jumping, playing, fighting, licking, kissing….and yes, of course, the ubiquitous “sniffing-of-the-behinds.” 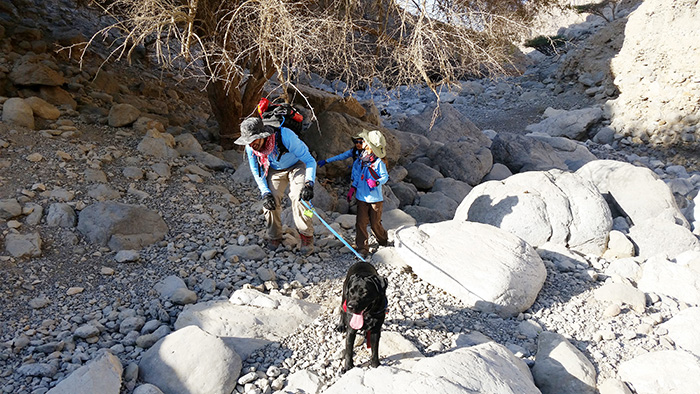 The event was extremely well-managed and the organisers covered many of the safety requirements; I really would like to applaud them for this! There were over thirty course marshals wearing uniformed t-shirts so that anyone could clearly distinguish them if need be. There were several vets on site; one at the beginning/end of the course and a couple mid-way. They graciously inspected each four-legged friend as they passed by to ensure their paws, legs, body temperature, hydration levels, etc were all in check. They even had a doggy-stretcher among their safety items, which I thought was really cool. In the unfortunate event that a dog needed to be carried out of the wadi this would have proved invaluable. There were other event sponsors on hand passing out K9 energy treats, over-sized water bowls all along the way for the dogs to rehydrate, professional photographers, and even a set of portable toilets for the humans (which, by the way, is a rare treat in the wild). 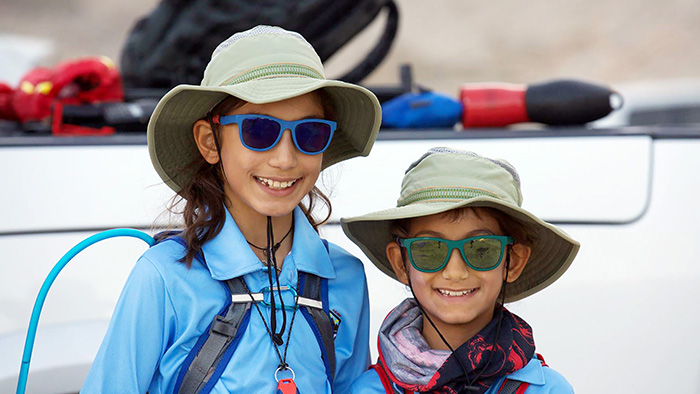 We finished our course just after noon so it was a nice 4-hour hike that covered 5km. We did take several breaks under the cover of shade from time to time to allow Raider to cool himself and regain his stamina. It was not always easy to keep him calm and relaxed as he wanted to jump up and run after every dog that passed by. Raider thoroughly enjoyed himself and we had a great time seeing him able to express himself and play in such a natural environment along with his fellow canines. Hopefully the HK9 Challenge team looks to put this event on twice a year. It seems to be growing in popularity and I think there would be ample demand for it. We are surely waiting for the next event!

A product of New England’s dynamic landscape, scenery, weather, and vibe, Matt has always been an adventurer and thrill seeker. Whether it is the mountains, desert, ocean, or wadis, he always enjoys his environment to the max. Having led a sporty and adventurous life throughout his childhood and young adult life, Matt is committed to giving his family similar experiences and memories that they can keep for a lifetime.  You can read more about Matt and his family’s adventures on their website www.discoveredtrax.com