Beetling About the UAE!

It has to be said that “I love beetles” and in fact this was one of the ways that I originally got into Natural History. After finishing my degree in Environmental Education in the United Kingdom, I spent the next 10 years working seasonally all round the world as a wilderness and adventure sports guide. Some of these jobs took me into very remote locations and this brought all sorts of opportunities for me to get closer to nature. One day out of the blue my cousin Miriam in the UK contacted me and asked if I would like to become an amateur collector for the Natural History Museum in London. She was a volunteer entomologist with the behind the scenes team who curate the biggest beetle collection in the world. She told me that if I made collections of beetles on my travels then the museum would happily take them and add them to the main collection in London. So over the next 10 years I gave five collections to the museum… But what use are a bunch of dead beetles I hear you cry? Well that’s a good question. Why do scientists collect insects and store them in drawers in museums?

There is a video on the Internet which features the curator of the Natural History Museums collection, Dr Max Barclay in a TED Talk discussing why we should be interested in beetles.

In that TED Talk, Dr Barclay tells us some of the most prestigious characters in our history started out life as beetle collectors. Charles Darwin is probably the most famous and he later went on to write the still current theory of how living things have evolved rather than been created.

Beetles are biologically classified as “Coleoptera”, which is taken from a Greek word that literally means “sheathed wing”. In fact the beetle has two pairs of wings but the first is a hardened pair called Elytra that protect the under wings and the body. There are over 400,000 known species of Coleoptera around the world which makes them the biggest order of species on the planet, around 25% of all living things are Coleoptera and in fact beetles make up around 40% of all known insects and 30% of all living things on the planet. Scientists are constantly discovering new species and it is suggested that there are in excess of one million beetle species on the planet. They appear in every environment and habitat on Earth except for Marine (salt water) and Polar (ice).

Some Beetles found in the UAE

In the UAE I have found many beetles on my hikes and photographed them. Below is a picture of a Rhinoceros Beetle I saw in the Hajar Mountains (they are harmful to crops and date palms) and I have used it as part of a diagram to explain the life cycle of beetles: 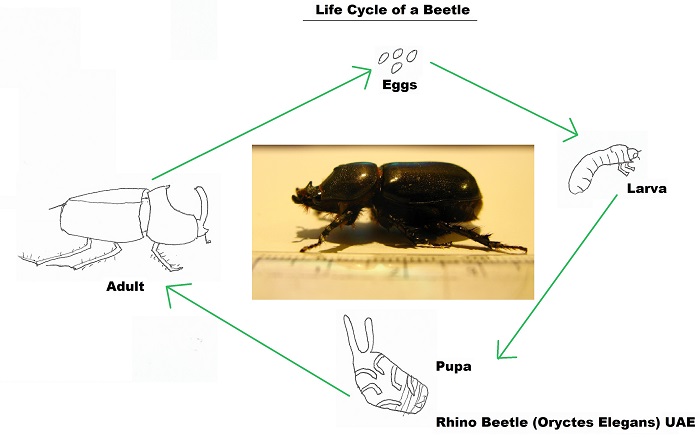 Scientists use collections of beetles to study their effects on crops and trees, some beetles are very bad for crops like the Red Date Palm Weevil which is found in the UAE. These are such a threat to date farms that the UAE police force has a special dog team trained to sniff out the beetles so that the palms they are in can be destroyed. 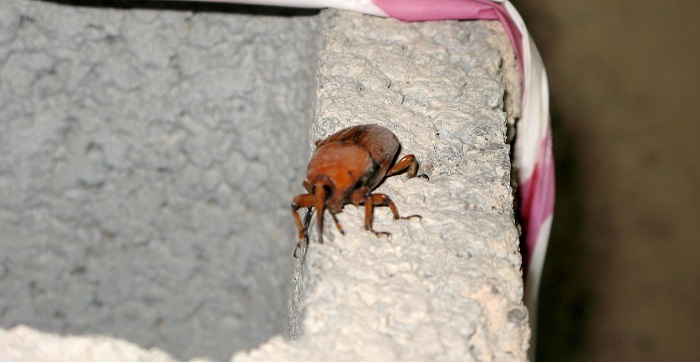 But other species of beetle are essential to the protection of crops. The Ladybird is the main predator of Aphids which are small insects that eat all vegetation they infest including farmers crops. Without the Ladybirds to keep the aphids population down, crops all over the world would be quickly destroyed. One reason to study ladybirds is to ensure that the pesticides used on crops to kill some insects that threaten them are not harmful to the ladybirds that help the farmers.

Another species of beetle that is good for the environment and important for us to study their distribution for this reason is the Dung Beetle. They collect all the dung dropped by much bigger animals like; Horses, Donkeys, Camels, Cattle, Goats etc. They roll the dung into balls and roll them to the sand where they bury them. They lay their eggs in the dung which not only keeps them warm and moist but also provides a food source for the larvae when they hatch. That may seem pretty gross to us but imagine if you were born inside a giant Oreo cookie and had to eat your way out, well that’s pretty much what it’s like for a young dung beetle!

The pitted beetle (Adesmia Cancellata) is an interesting species of Darkling Beetle found in the very dry desert areas of the UAE. It has an unusual way of collecting drinking water. Fog condenses on its outer shell into droplets which collect and run down tiny channels in its Elytra to the mouth parts where they swallow it. 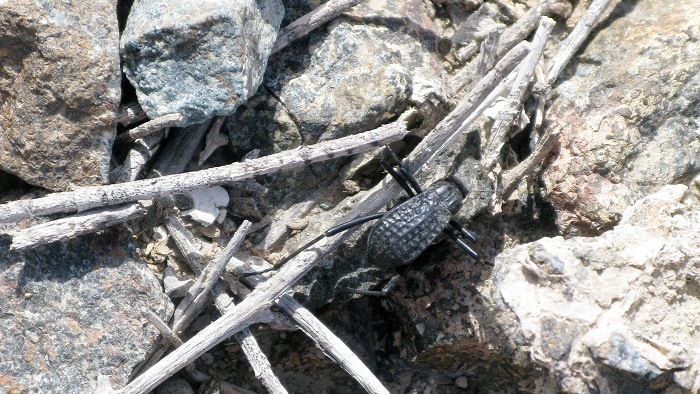 The Sulphurous Jewel beetle (Julodis Euphratica), found here in the UAE usually amongst Acacia trees, is not only a truly beautiful looking species with its torpedo shaped body and yellow flecked outer shell but it has a quite incredible life span for a beetle. The larval stage is the longest of all known beetles on the planet and can last up to 35 years! The adult stage then only lives normally for two to three days and a maximum of a week. It emerges to feed, mate and then die. Whilst the larvae are wood borers the adults feed on sap and nectar of plants which is why you will often see them flying around scented flowers making a lot of noise as they look for dinner and a date – not a bad lifestyle! 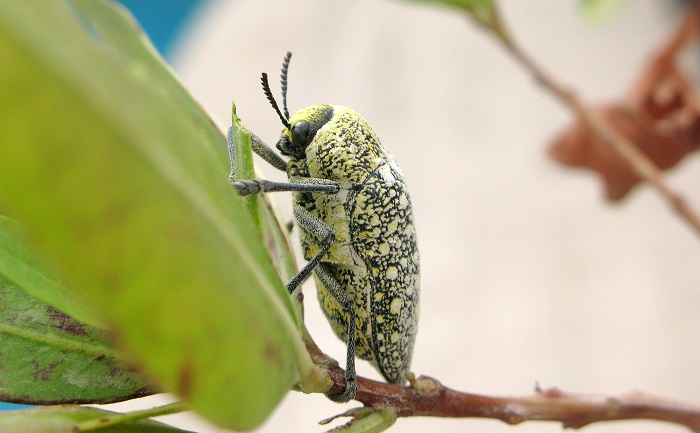 In the UAE one of the most famous book series on beetles and in fact all things “Creepy Crawly” are the five volumes of “Arthropods of the UAE” By Tony Van Harten which are available in the bigger bookshops here and will give you a great insight into almost everything you can find in the Emirates and beyond into the Arabian peninsula. These books may take up a lot of shelf space but they are by far the most detailed insight into the insects around us that you can buy. 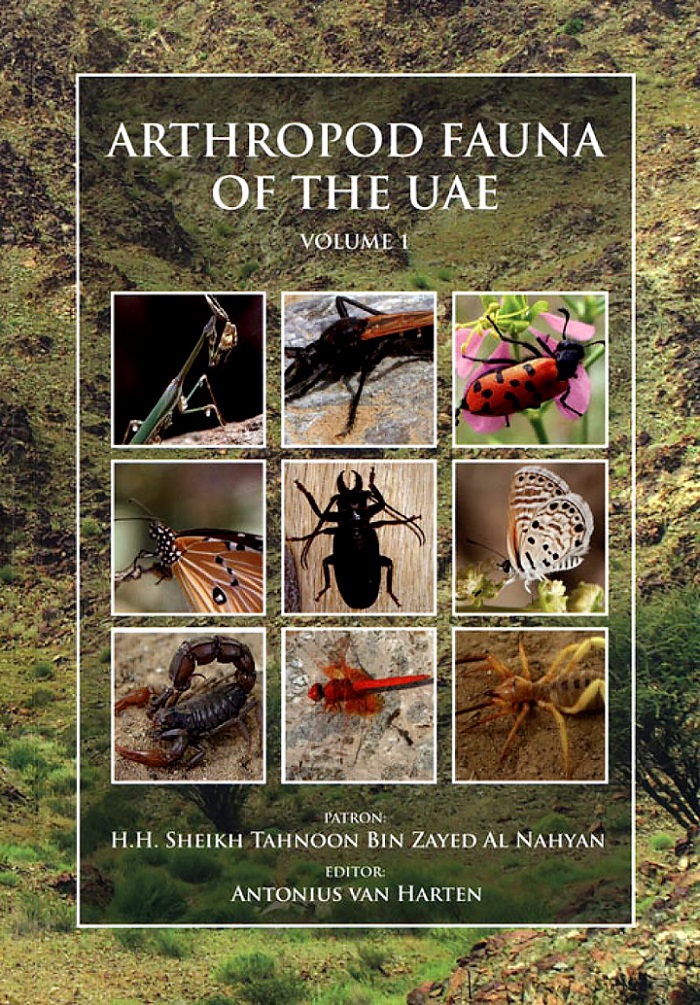 If your budget or shelf space (!) won’t stretch quite that far then you can go for a more general book like “Insects”by George C. McGavin who is not only a former entomology curator at the Oxford University Museum of Natural History but has also hosted numerous TV shows in which he literally crawls around inside old logs and tree trunks in remote jungles in search of really big insects which then crawl all over him! A bit like, “Man Versus Wild” but with really big wild insects!

These books explain to you how to recognize and identify different species and give a whole load of interesting information on where they live, what they eat, how they reproduce etc.

For the budding Beetle enthusiast or insect inspector you really can’t go wrong with investing in:

Here in The Emirates we are very lucky to have a truly massive beetle, in fact it is the biggest beetle in the world outside of the Brazilian rainforest. The Giant Longhorn Beetle (Anthracocentrus Arabicus) grows to an astonishing 11cm and its front mandibles are big enough to draw blood if you don’t wear gloves to pick one up! Their natural habitat is the UAE’s National Tree, the Ghaf and it is almost exclusively the only place you will be able to spot one of these beauties and even then only at night if you are very lucky. The beetles in their larval stage are laid by the female deep in the Ghaf’s roots which can extend up to 60 meters down to water. They may not hatch for up to five years but when they do they eat their way out of the root (that’s what the big mandibles are for; that and fighting other males!) and when they finally emerge, the males live for just 1 month with the express purpose of mating and the females live for just a few days. Research by Dr Brigitte Howarth and Dr Michael Gillet showed that there are around 6-10 males for every one female and that the beetles are fully formed and never eat once they emerge above ground they just live off the reserves of fat they built up in the root systems. If you want to see one, be prepared for a long wait. Try Dr Howarth’s trick of placing flat boards around the base of a Ghaf tree and keep checking them every couple of nights. The Giant Longhorns love enclosed spaces.

Research has shown that the beetles play an important role in the ecological balance of Ghaf and Desert woodlands. Ghafs planted for ornamental purposes have been shown to not have these insects living in and around them. Sadly they are getting rarer now in the UAE due to many Ghaf trees being cut down or transplanted to make way for progress. 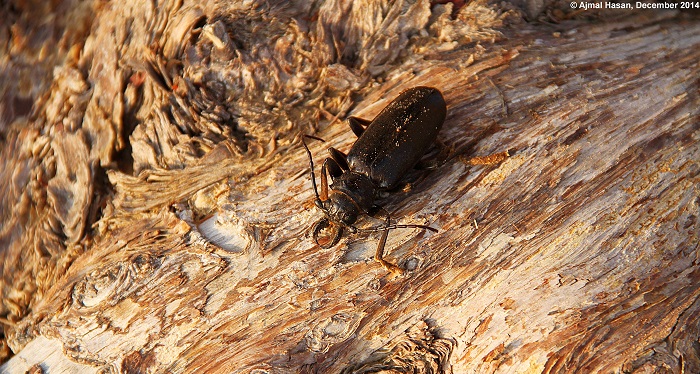 If you do decide to take up Entomology or Beetling as a hobby please be respectful of insects in their natural habitat. It is not necessary to kill them to study them and you can learn just as much by drawing and photographing them then releasing them back to where you found them. Children should be very careful about picking up insects without gloves as some species may cause itching or a rash. It’s much better to take a photo then wait till you get home to identify which species it was in a reference book. Remember you can also book introductory hikes through OutdoorUAE to learn about insects in the wild with an expert.

Good luck and enjoy Beetling about the UAE!