Oman by UTMB is supposed to be a tough ultramarathon (www.omanbyutmb.com) at 137km, with almost 8,000 meters of rocky vertical ascent and 44 hour time limit. But even the top elite runners are surprised by its difficulty. Afterwards Co-Winner Jason Schlarb commented: “The course was unbelievably challenging – technical and exciting all at once.” Co-Winner Diego Pazos added: “The course was more than challenging. It’s really incredible – the most challenging race I have ever done that’s for sure.” 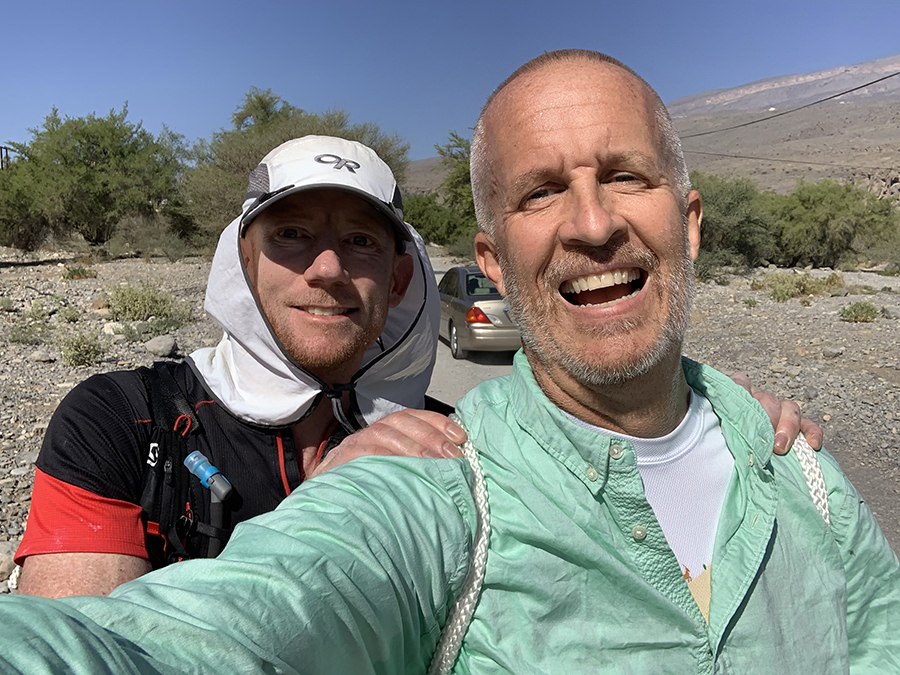 Harder than Anybody Imagined
137km is about the same distance from Dubai to Abu Dhabi. Mountain climbers consider 8,000 meter peaks to be the ultimate altitude. But those details aren’t the issue at UTMB Oman: Runners start Thursday evening at 19:30 in darkness. Over 60% don’t finish because of time cutoffs, injury, and simply dropping out. The terrain is the most inhospitable around: steep mountain climbs and sharp descents on ragged rocky terrain with cliffs everywhere – some you go around, some you climb along the ridge, some you climb up, some you climb down. Can you imagine after running fifteen hours that you must don a climbing harness and helmet so you can clip into the Via Ferrata for safety? Ironically that isn’t even the tough part – since ‘what happens on the Trail, stays on the Trail’, you’ll need to ask one of the finishers for the gory details! 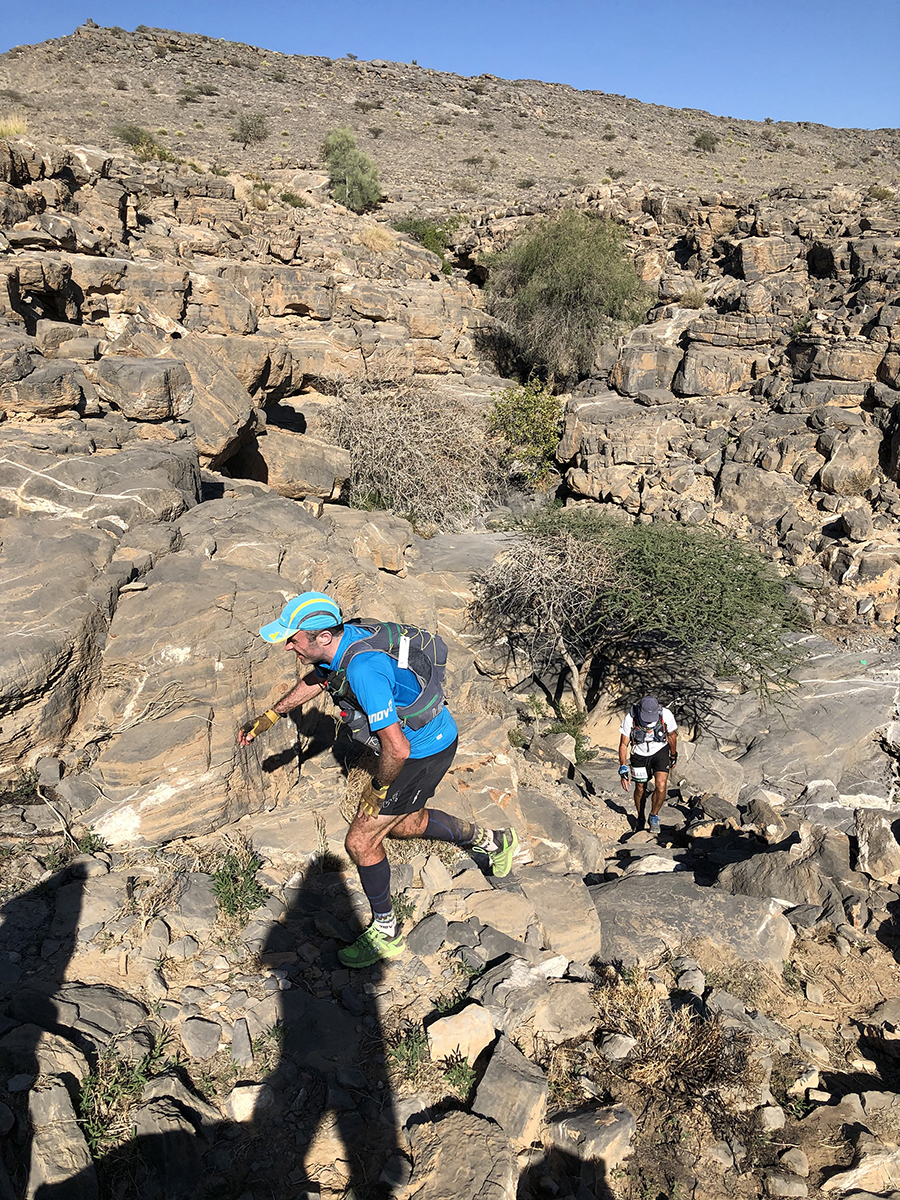 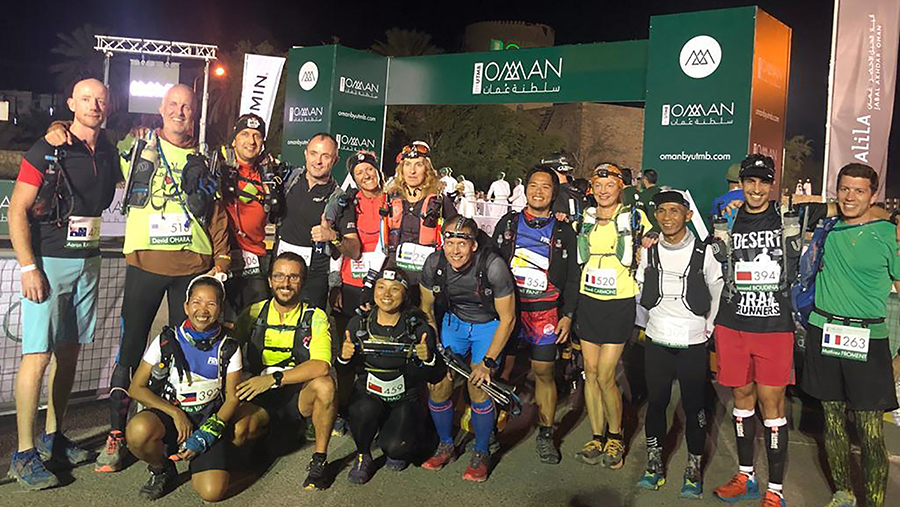 Team UAE ultrarunners before the start

Team UAE Ultrarunners
Everyone who has run in an Urban Ultra event or trained with Coach Lee Harris knows that there is a sizeable ultratrail running community in UAE. To train for UTMB Oman, fellow ultrarunner Mark Buley coordinated some of the craziest training runs imaginable every weekend for four months. Consequently about 15 of us showed up at Nizwa, Oman for the toughest ultra around. Jaouad Boudina is one of the regular ultrarunners who competes in the UAE and here is his story.

Jaouad Boudina – UAE Ultrarunner
A few days after finishing the Oman UTMB, Jaouad is still trying to process what happened during the brutal but amazing race, with only 40% of the starters finishing what now must be considered the toughest Mountain Ultramarathon race in the world. So many things can go wrong in an ultra, and Jaouad’s issues start way too early. At 14km, he feels a click on his left ankle after stepping on a loose rock. He hopes it is just a figment of his imagination as he has already twisted that ankle twice this year. By the time he reaches CP2, he tells his running buddy to go ahead without him, even though they had planned to run through the darkness at night together. 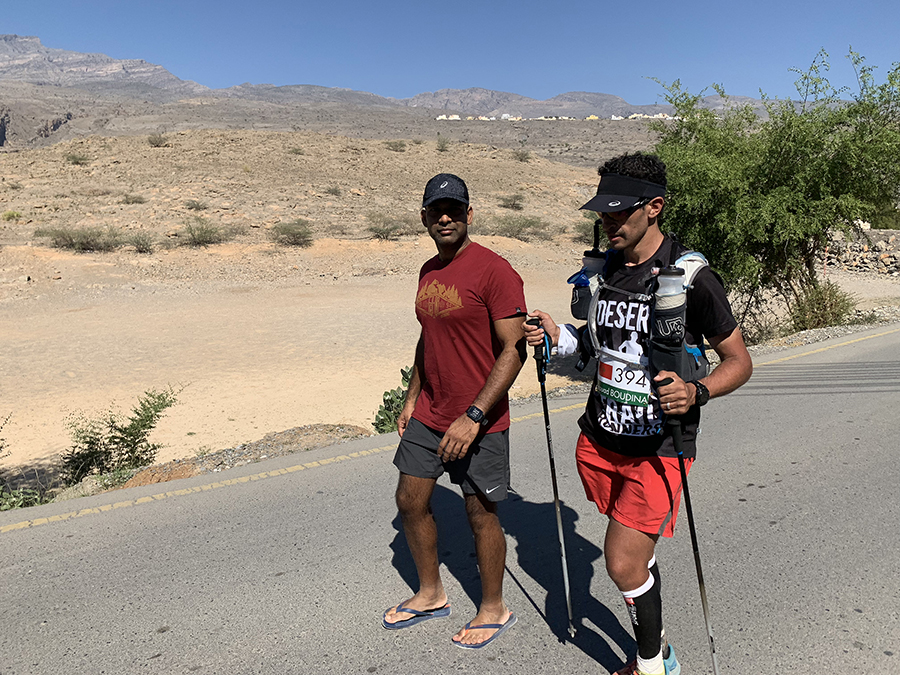 Plans Change, Goals Change
At that moment, Jaouad never entertains the idea of quitting. Instead he must change his goal from a specific time to just finish the race under the 44 hour time limit. (NB: There are strict time cutoffs at checkpoints throughout the race – I missed a cutoff at CP5 by two minutes and was DNF’ed.) With his slower pace strategy, Jaouad focuses on his nutrition plan. Knowing that he must spend more time on the trails than anticipated, he takes advantage of food at aid stations. But the biggest adjustment which he credits for getting to the finish line on time is how he attacks the uphills. Climbing is gentle on his sprained ankle, but he also takes it super easy on the technical downhills using trekking poles. The effect is that with every single climb, Jaouad manages to overtake many runners while keeping his heart rate relatively low. 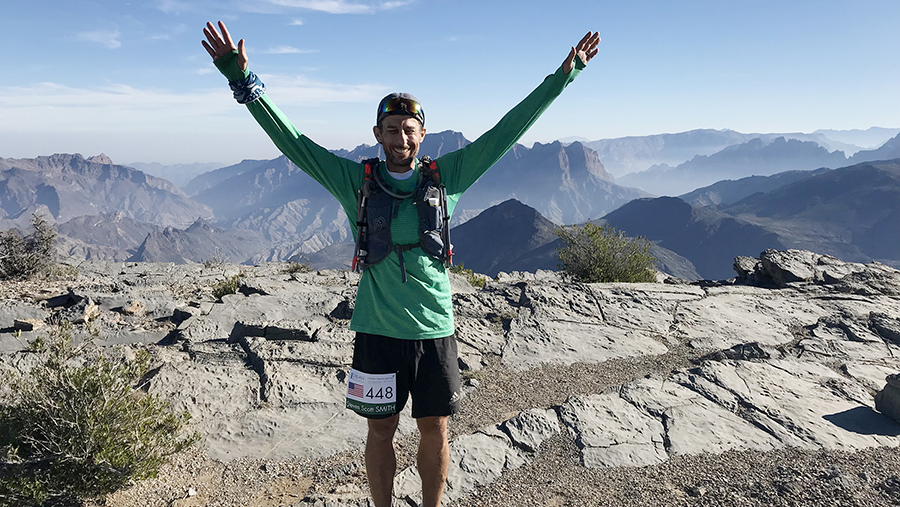 Newton’s Third Law of Physics
Jaouad’s confidence grows under the circumstances, and he starts to gain on cutoff times. At checkpoints, he sprays anti-inflammatory on his foot. However, around 70km Jaouad notices he is developing blisters on his toes, as he has been overcompensating and avoiding putting weight on his ankle by changing his gait and using his forefoot. A few hours later at the 82km checkpoint, the medical staff tape up his ankle, drain the blisters and are shocked to find out he is still going on with the race. After eating real food, Jaouad leaves the comfort of the checkpoint quickly to avoid being under time pressure while injured. 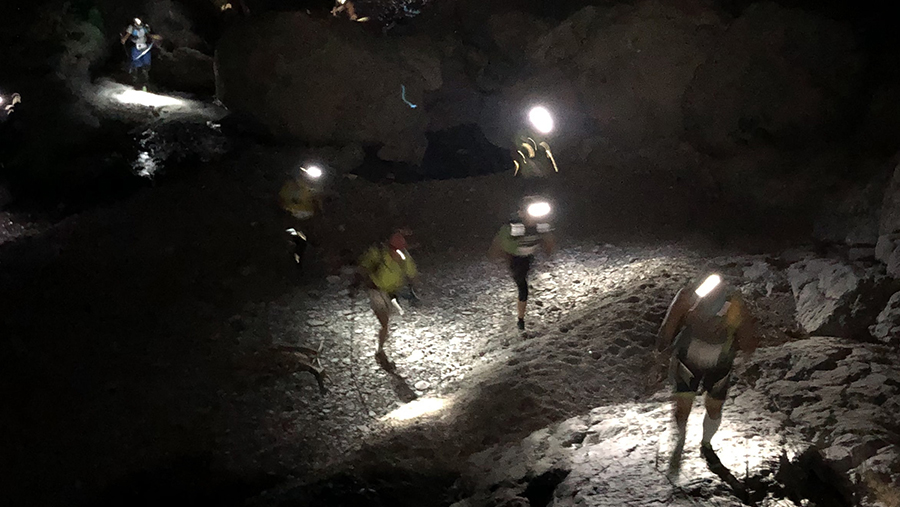 The Mother of All Climbs
A few hours later Jaouad has a big scare while going down some technical terrain when he slips on rocks and falls on his back. Fortunately, his hydration pack absorbs the impact and he is able to keep going with minor scratches on his right elbow: Seriously, what else could go wrong? A few kilometers later, Jaouad’s right foot now starts to feel painful, because he is still overcompensating for the pain in his left ankle. So, at the 116km checkpoint, he is again being treated by medical staff but this time no bandage, just Voltaren gel. To make things really interesting, a few meters from the checkpoint the mother of all climbs awaits with 1000m elevation gain in 3.4km. In layman’s terms, this section is better known as a “cliff”. 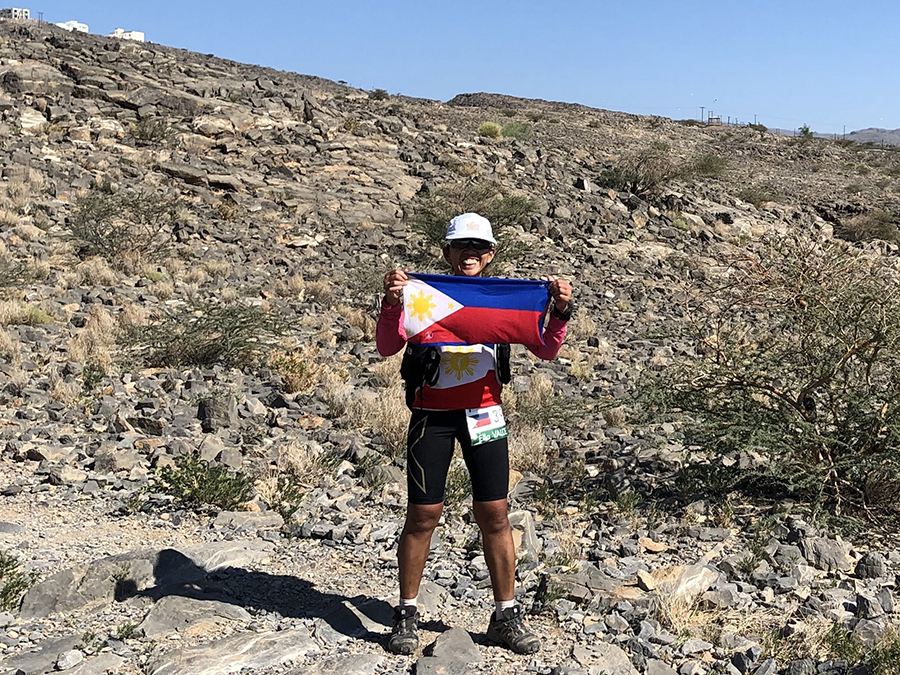 What Have You Done in the Past 41 Hours?
For perspective at this point in the race, Jaouad leaves this checkpoint in darkness at 01:00 Saturday morning, but remember the race started at 19:30 Thursday evening. The staff mention 57% of runners have already dropped out: are they suggesting Jaouad should drop? Hearing that DNF statistic boosts his pride and at the same time, sorrow for all our friends who couldn’t finish, as one of them sits near Jaouad in the medical area waiting for a shuttle off the mountain. Jaouad climbs the cliff steadily and finally takes his first caffeine after 29 hours without sleep. Now it’s mostly all rocky downhill, and Jaouad conservatively decides to take it super slow as he knows he can easily and safely reach the finish line before the cutoff time. Just before reaching the finish line, some of the Team UAE Ultra Runners are waiting and accompany Jaouad to the finish line in 41 hours and 17 minutes. Pause and think about where you were 41 hours ago and what you did in those 41 hours. 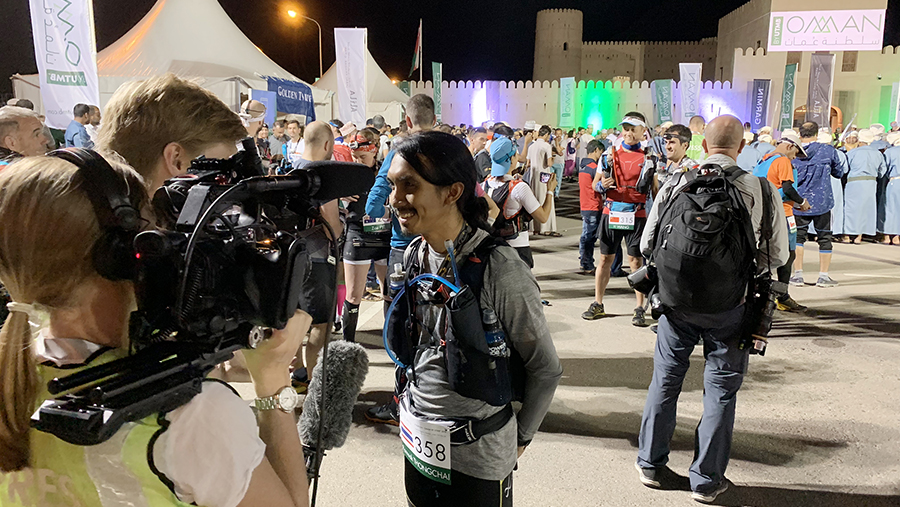 Pornsak the Rockstar getting interviewed 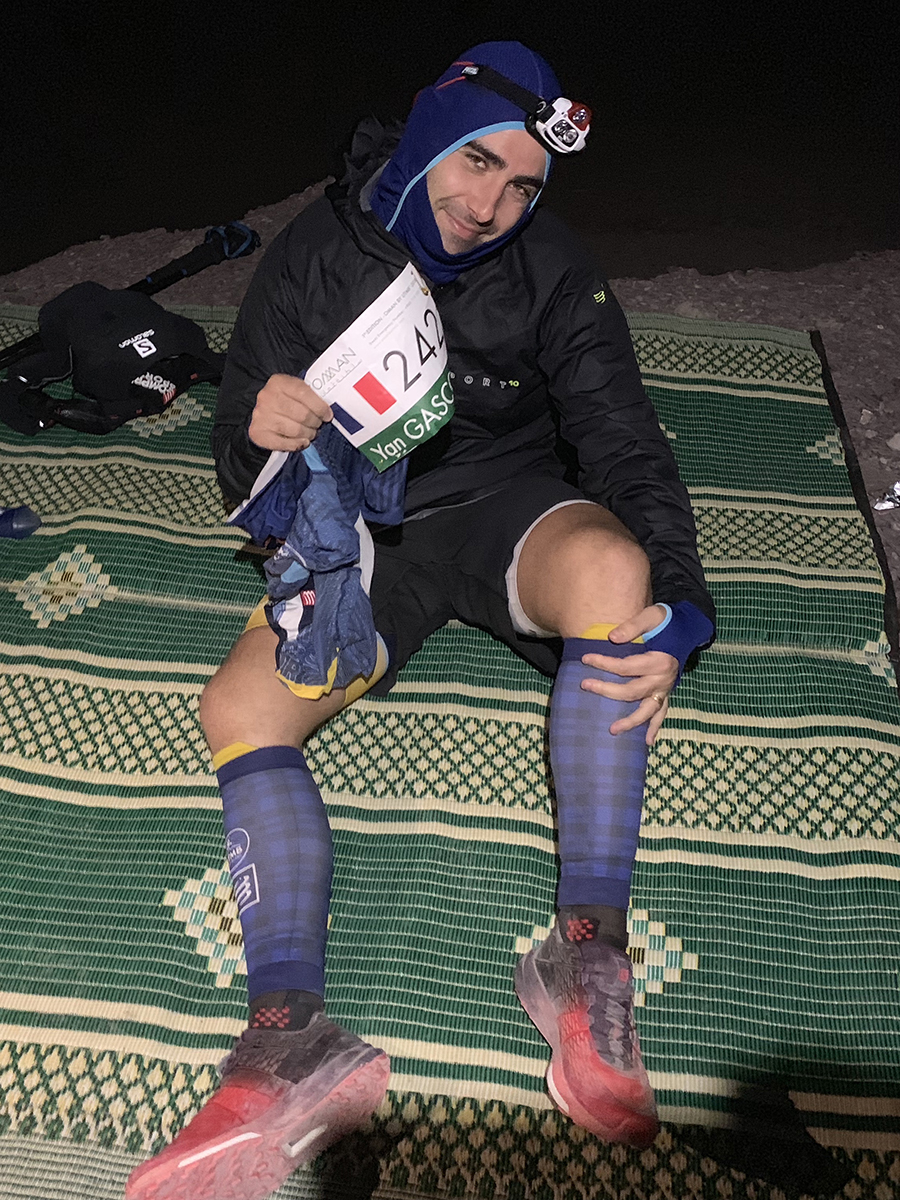 Pain is Temporary
Jaouad says despite the pain he endured over two days and two nights in the mountains, this race will stick in his memory forever. He sends a big thanks to Coach Lee for his contribution to the UAE Ultra running and because of him and the Desert Trail Runners group he became a Finisher at Oman UTMB, the toughest ultramarathon around. Other Finishers from our UAE group include Matt Froment (34:46), Sean Hurley (36:01), Rob Jones (36:01), Rebeca Ehrnrooth (37:07), Kimmo Karppinen (39:02), Aaron Rawnsley (39:17), Ella Valdez (42:37), Mark Buley (43:25). Big shout-out to our friends Pierre Delbecq (35:05), Guenther Triebel (39:42), Steve Smith (43:25), and Andy O’Reilly (45:27). For those of us who DNF’ed and shall remain nameless, I commit to lose some kgs and train like Jaouad, so I will see you next year on Jebel Akdhar! 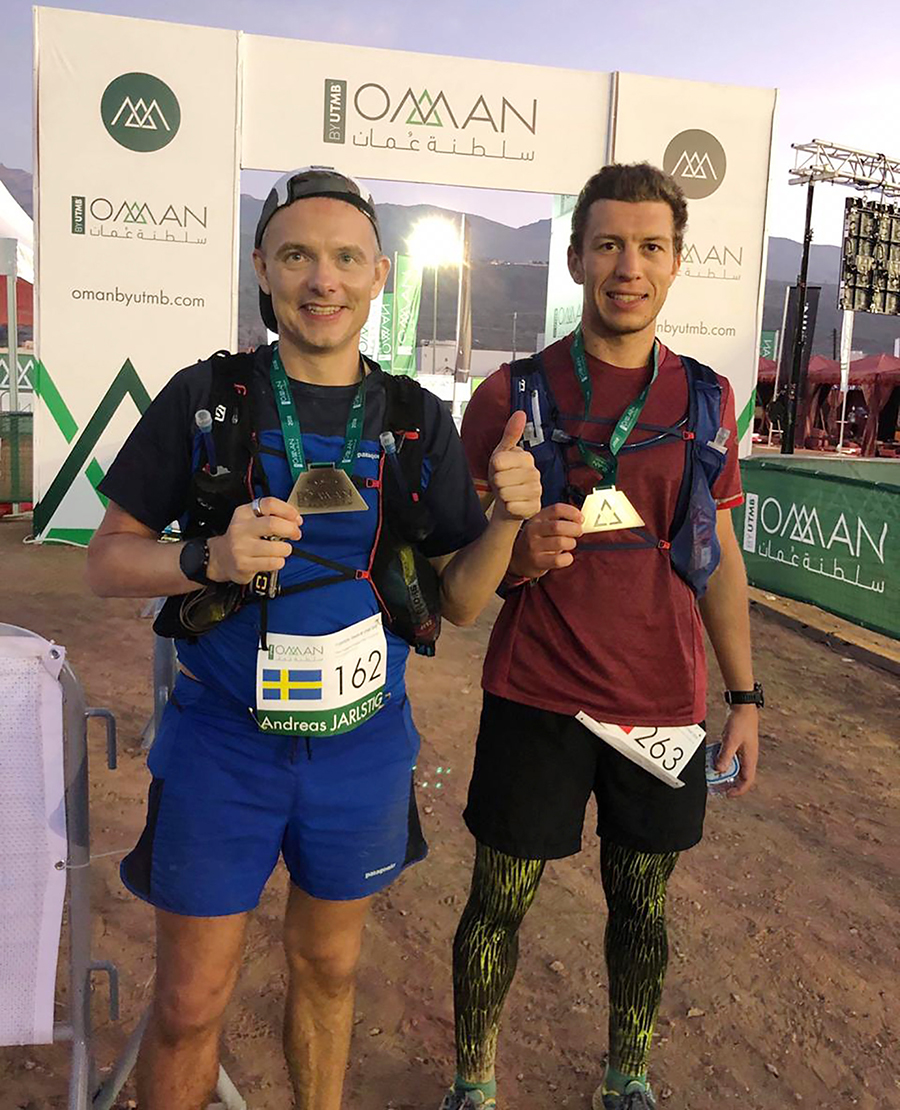 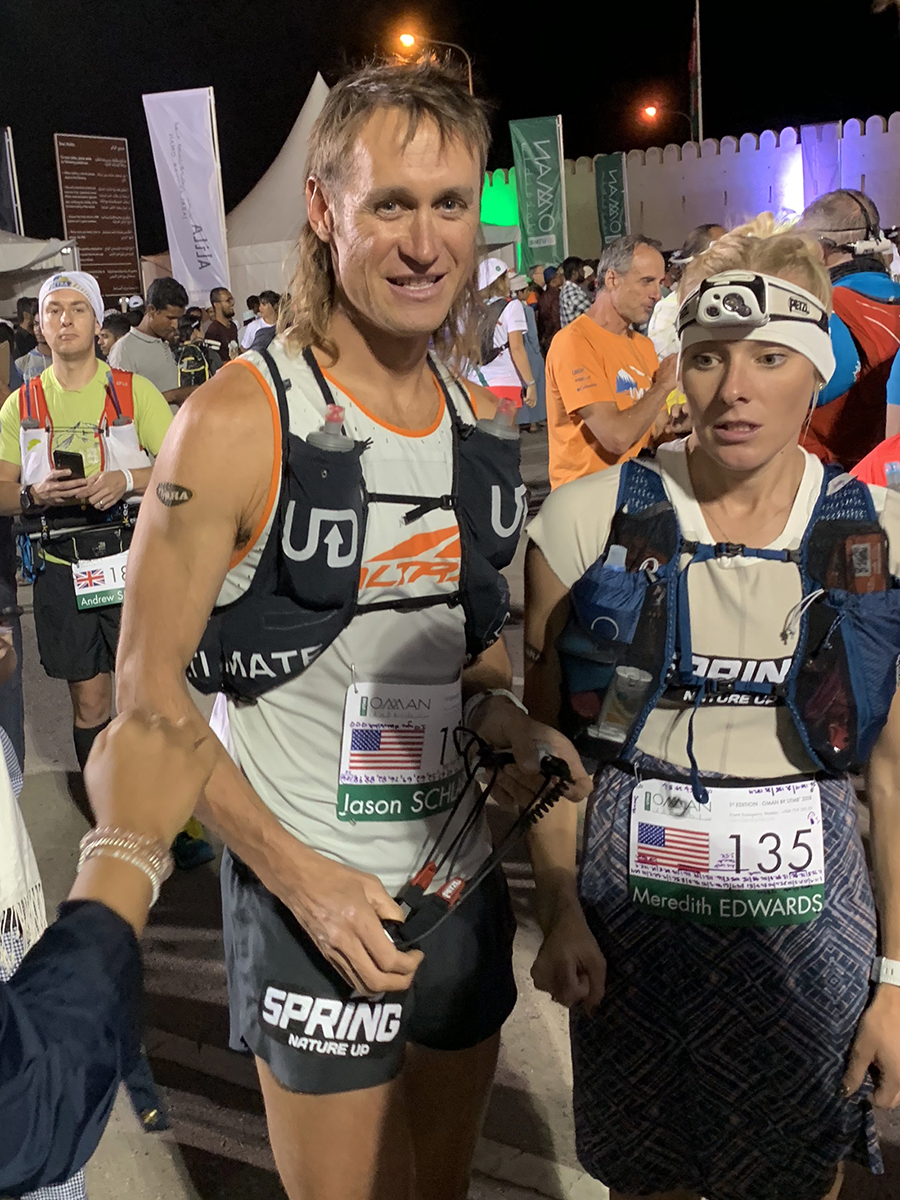 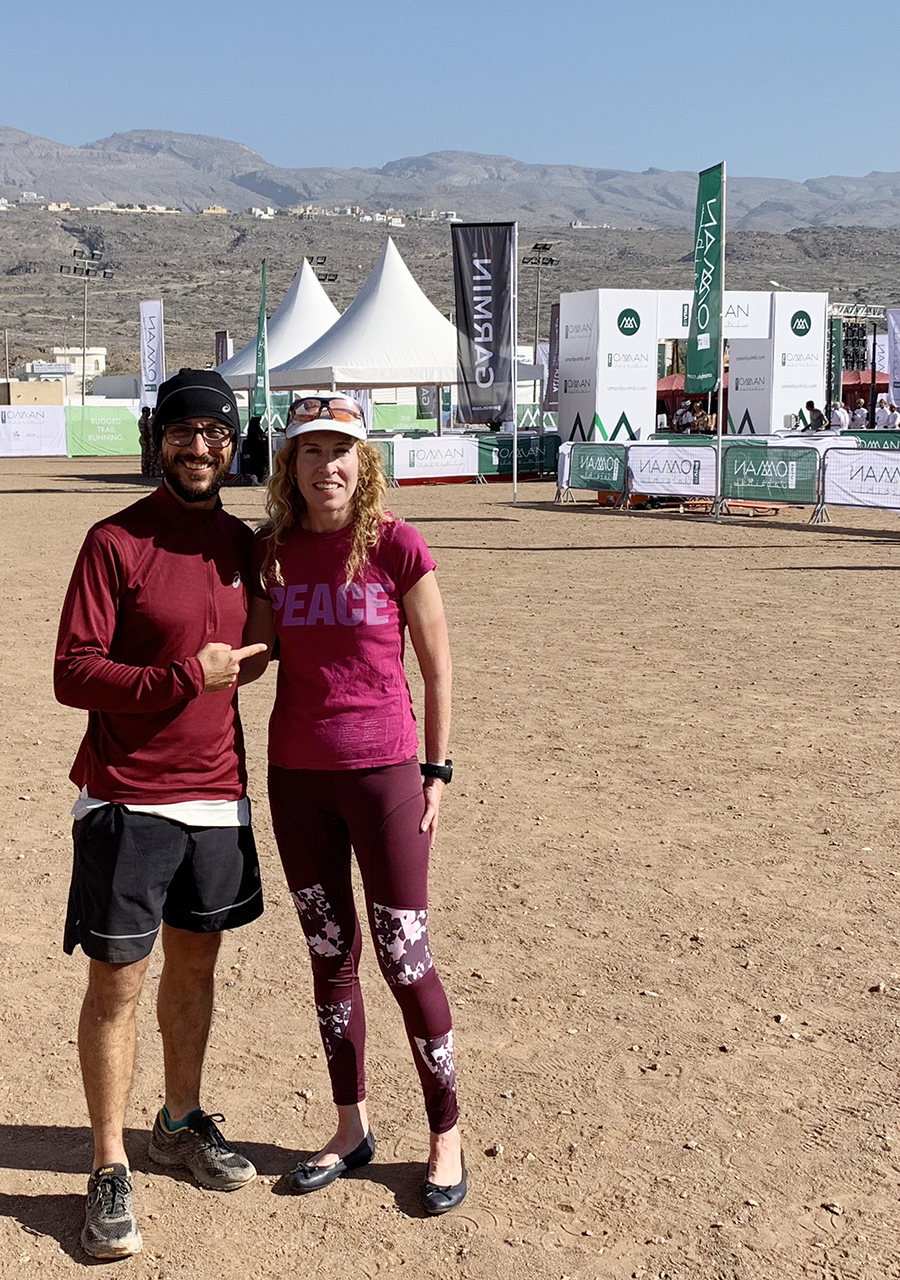 The New Barkley Marathons
If you have to google “Barkley Marathons”, then the magnitude of difficulty, physical challenge, endurance and suffering at UTMB by Oman is probably unfathomable. Here is what fourth place finisher and Ultra Trail World Champion, Gediminas Grinius, posted on Instagram: “UTMB Oman should be on every badass trail runner list, as it is the new Barkley Marathons …” ■