Toughest thing I have ever done, by Sam Morris

The Oman Desert Marathon (ODM) is one of the hardest endurance races around, but having run the 250km Marathon des Sables (MDS) across the Sahara last year, I thought I was ready for the ODM. But this event was another level of endurance, pain, sweat, and tears with an IV drip! 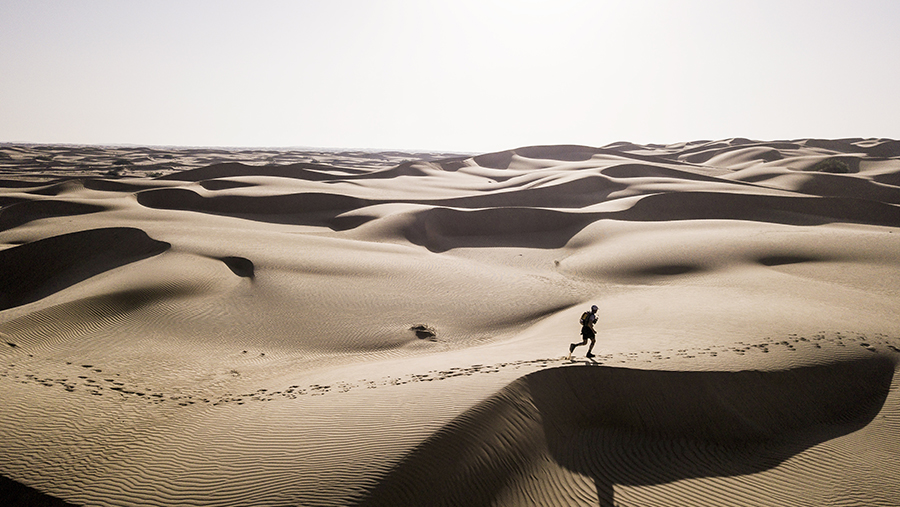 I just ran 165km over six days across Wahiba Sands in Oman, from the oasis town of Bidiyah to the Arabian Sea. Runners are self-sufficient, carrying our own food and equipment (except water and an open sided tent). Why do that? I ask myself the same question, breaking down what I have accomplished and questioning my life choices. Many sacrifices were made to get to the start line and now that it’s over, was it worth it? Yeah, it sure was. 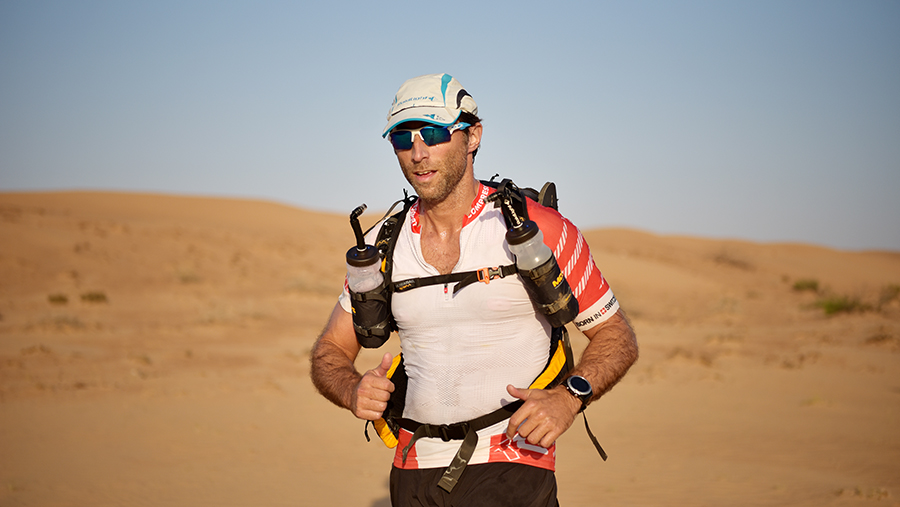 How about Sam’s six pack?

Why?
When I get home people will ask me, “Hey Sam, why do you do it man? What, you some kinda pain junkie?” I will probably mumble a few subdued words about endurance, pushing the body to its limits and move on. Why? Most people won’t comprehend what ODM is all about or why we do it. They won’t understand that it’s about finding inner peace, clarity of mind, feeling your body down to its individual fibers, delving deep into your very core, exploring those hidden dark places in your mind and coming out the other side a better person. Somebody once said: “The human body is designed to move, to hunt, to flee, to be pushed and tested. But somewhere along the way comfort became the key to happiness. Buy a big fancy home, a luxury car with leather seats, and yet the material things never seem to make us happy, and in the process we are softened both mentally and physically. Where did we lose our way? Is there something in our DNA that finds comfort through discomfort?” 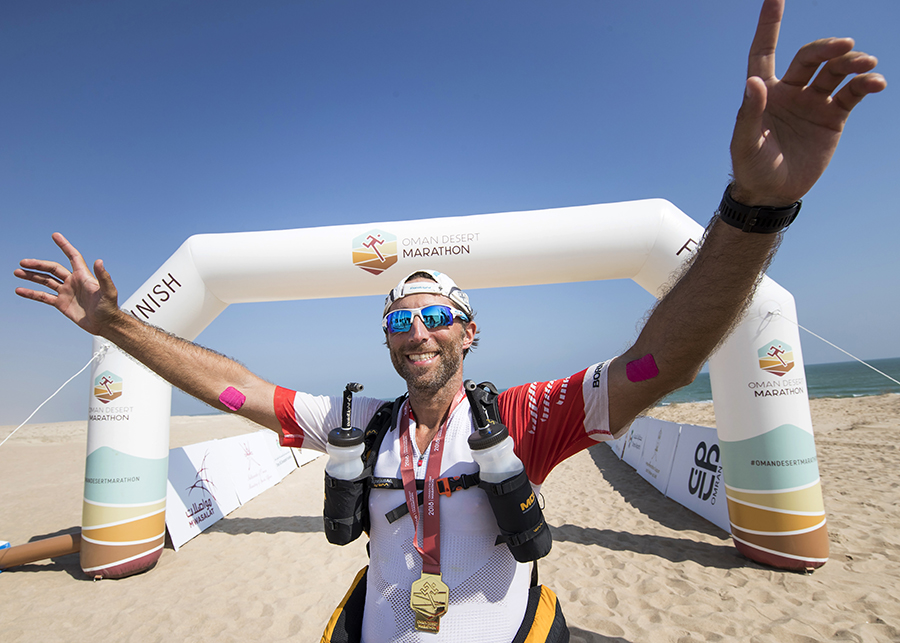 Glory of the Finish

Peace. Zen. Balance.
I am not the fastest runner. I’m not in it for the glory of winning and usually find myself at the middle of the pack. It’s about the experience, the highs, the lows, the pain, the suffering, the living, the now, the dreaming, the men and women next to you, being in the moment. Nothing else matters but putting one foot in front of the other. “You can make it” going over and over in your head. Managing your body and mind in the extreme. Achieving the impossible. Never giving up. That’s all it is. Some compare endurance running to a form of meditation: Peace. Zen. Balance. 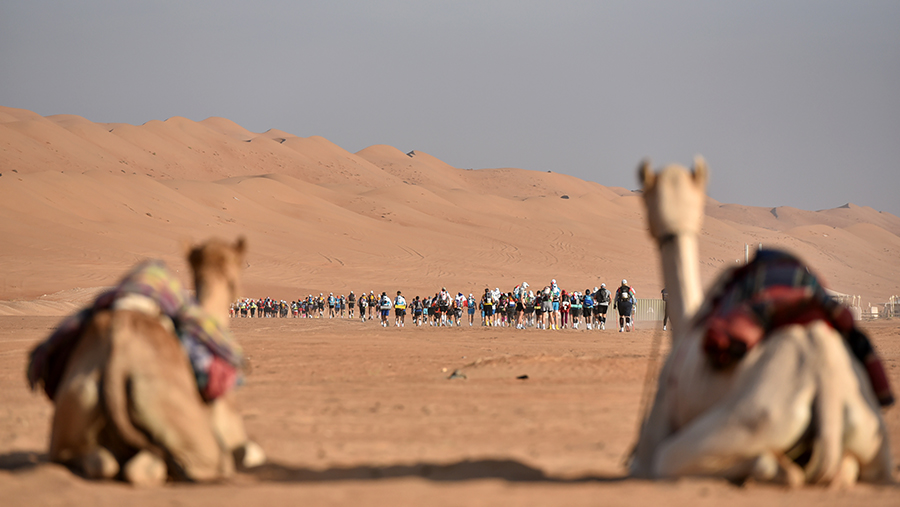 The Race
The Oman Desert Marathon (www.marathonoman.com) takes place in the Wahiba Sands, a large desert about five hours south of Muscat and in a format similar to the MDS: a 6 days/stage foot race, fully self-sufficient (except organizer-provided water and that open-sided tent). However, at just 165km the ODM is a bit shorter than the MDS, but the real difference is ODM is barely runnable with all soft sand versus MDS which is “only” about 40% soft sand.

Day 1 – 25km
The first day is a brutal baptism of fire. 25km of nasty big dunes with minimal flat runnable sections. My body crashed at 19km with severe cramps – I ignored my hydration strategy the first 10km, smashing it comfortably in 1hr 20mins but only consuming 600ml of water in 36C heat over soft sand with some very big climbs. I was pleased to eventually cross the finish line in 38th place out of 93 runners. Stage 1 time: 4.06hrs

Day 2 – 20km
Another tough day, after a strong start, cramping again from 14km. After training so hard for 3-4 months in the Dubai desert heat on sand, I was extremely frustrated my body wasn’t cooperating and out of balance on race week, considering I was doing everything the same as in training. But these races are all about overcoming and adapting. Stage 2 time: 3.21hrs 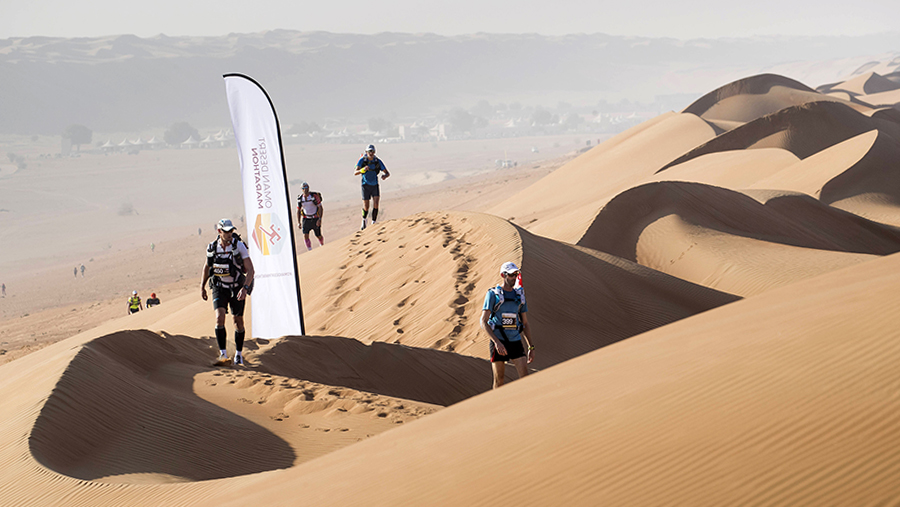 Welcome to the dunes

Day 3 – 28km
Another ‘ok’ start, reaching CP1 (10km) in an hour and a half, however the temperature quickly soared today into the mid-40C’s. I struggled getting my core temperature down and by the time I caught up with my friend Karen (also struggling) we ran-walked 17-20km together. Similar to the first 2 stages, I started suffering from severe cramps again coming into CP2 at 20km. At CP2 my body rejected water and gels, and I started vomiting/dry heaving. I walked the last 8km, but couldn’t keep down much water – resulting in a stage finish and barely avoiding being kicked out the race.

Oops!
I was rushed straight into an ambulance for an IV drip as I was suffering from disorientation, severe dehydration, heat stroke and cramps. After the IV drip, the doctor gave me the all clear to return to my tent to continue super-hydrating and getting nutrition. During the night I went through some very dark places, anguishing over “You have nothing to prove, don’t risk your long term health” versus “The doctor has cleared you to continue so don’t quit, only 3 stages to go!” Stage 3 time: 6.02hrs

Day 4 – 28km
After ending Stage 3 with an IV drip I wasn’t confident about Stage 4: “Today is going to be a good day!” and “Never give up!”. As the desert temperature rose over 40C, I eased off the pace after 10km and took my phone out for the first time during the race to capture the magnificent and magical Wahiba giant sand dunes in all their glory. Stage 4 time: 5.04hrs 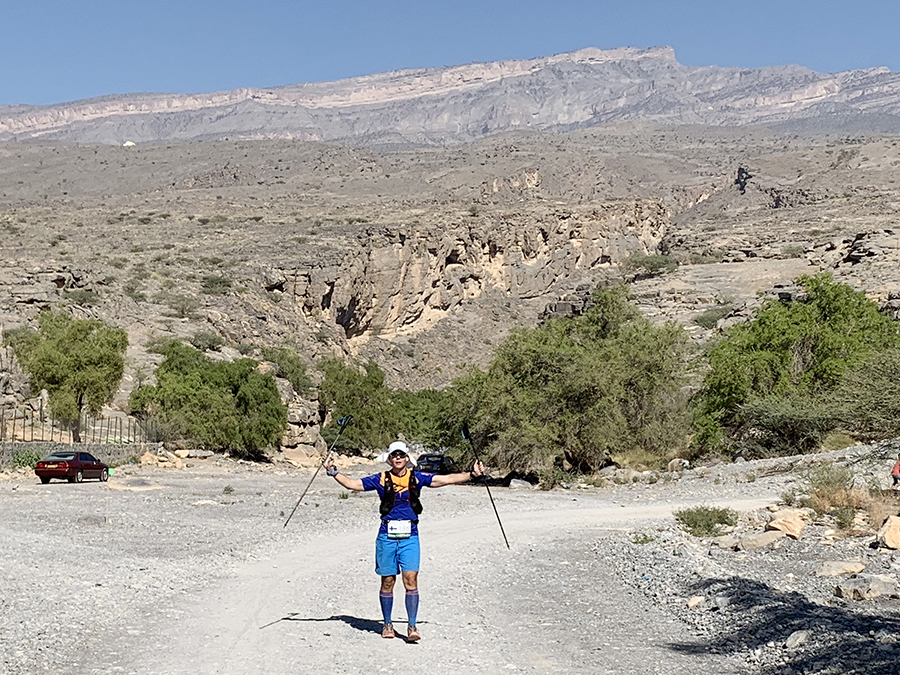 Day 5 – 42km: Marathon Night
For the marathon stage, runners were dispatched in three groups based on overall time. Given my issues during the first four stages, I was placed in the earliest start at 3pm. I set off comfortably, making it to CP1 in fourth position. Soon I caught the two lead runners and I ran alone at the front behind the lead car in the dark until CP3. Around 35km, the elites overtook me. It was a very special moment to hear “Mon ami!” from the famous champion Rachid El Morabity. I had met him during the MDS2017 and we had been chatting in camp over the previous days. He reached out and touched my arm as he passed, followed by his equally talented brother Mohamed and the incredible Sami Salim Alsaidi. This was a very magical moment that reenergised me during a dark spell. Stage 5 time: 6.26hrs 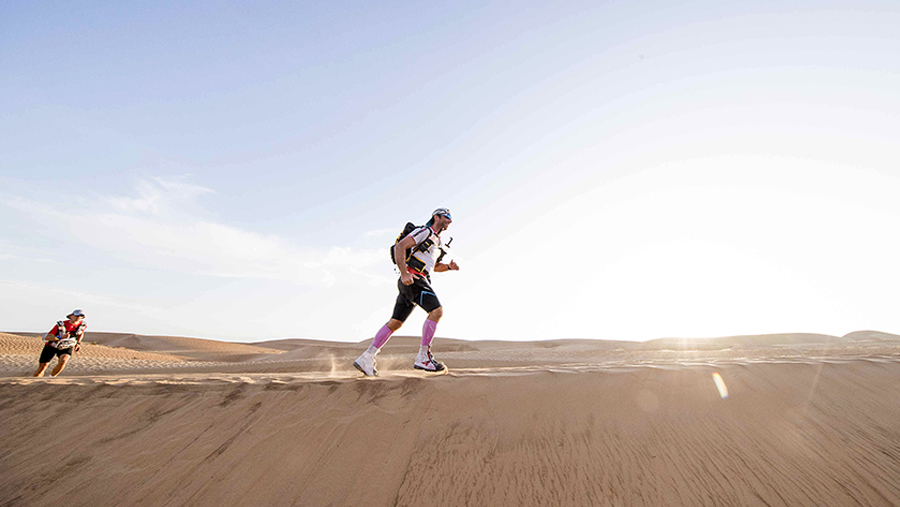 Stage 6 – 24km: Finish
Whoever thought up this stage is a sadistic genius! The last 14km to the Finish is up and down twelve of the world’s largest sand dunes in 40C+ heat after running 140km the previous five days. But the views were spectacular, and it was inspiring to come out of the desert to meet the Arabian Sea, creating a moment I will never forget and truly cherish for the rest of my life. Stage 6 time: 4.44hrs 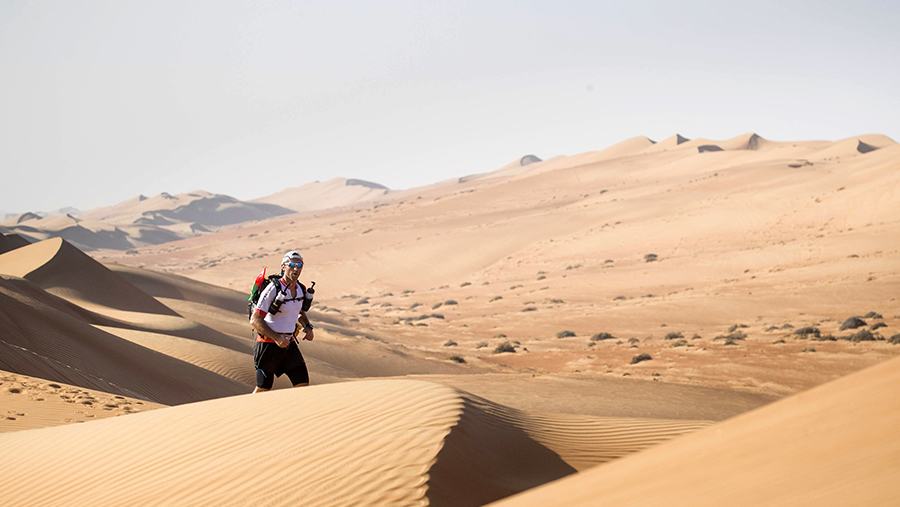 How Can You Prepare?
Sign up with an ultra-endurance running coach for a structured training plan. I recommend Coach Lee Harris, based out of Dubai. Coach Lee runs the Desert Trail Runners and he trained me from zero to MDS in six months, multiple ultras and now the ODM. You must give your training a 110% commitment and be prepared to make sacrifices with your social life!

What Does ODM Have in Common with Las Vegas?
They say ultra-endurance running is like visiting Las Vegas … the build-up is long, you are itching to get there, upon arrival you’re fresh, excited and exhilarated, with a spring in your step and a sparkle in your eye. The middle is filled with memory loss, questionable life choices and UI’s (unidentified injuries/illnesses). When you eventually leave, you realize you were there far too long, tired, dirty, malnourished, dehydrated, slightly fearful, paranoid and in desperate need of a shower and probably itching again. You vow never to return. However, as time goes by you start to crave the bright lights and the glory. 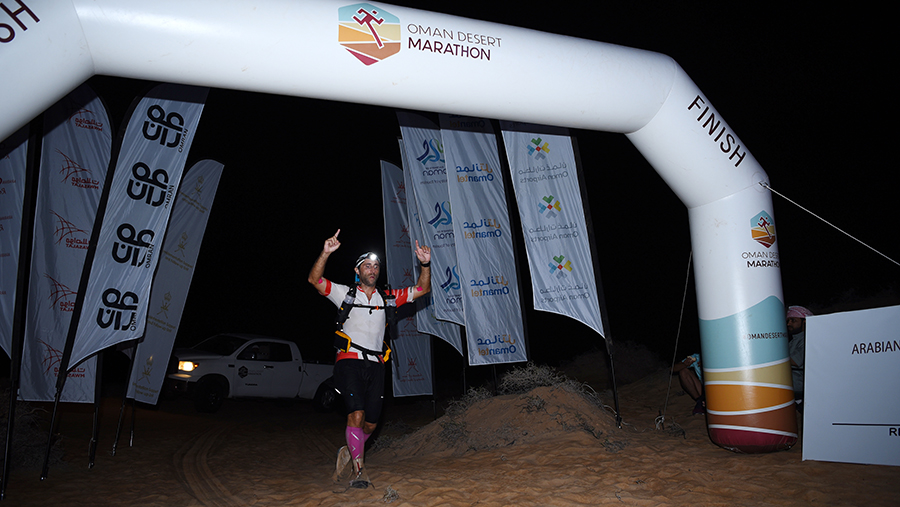 Would I Do It Again?
The memories of the pain, sweat and tears will subside. It took me a year and a half since my 250km run across the Sahara to sign up for ODM. Now that ODM2018 is completed, find me next year and I’ll let you know which big event I chose: either an ultra or Vegas! ■