The Hidden Falls of Oman

Ever since I stepped into the United Arab Emirates, Eid holidays have been something we all anxiously wait for. Of course we don’t have the privilege of planning a trip in advance as the days will only be declared few days before the holidays. Apart from the good side of having a holiday there is the other side that most of the regular or known outdoor spots are overcrowded during long weekends and not the very best choice for a family camping trip. Keeping that in mind we decided to turn our sails to a less known part of Omani territory, a few kilometres away from the famous Hatta pools.

The plan was to reach our first camping spot at Wadi Shuwayhah at a decent time to set camp. It is a rich wadi well known to the regulars that can be reached by four wheels right to the heart of the wadi. The wadi wall reminds me of a carefully crafted colonial hotel lobby – its walls have been naturally polished by the gushing waters over the years and now looks like Italian marble walls. The cave-like formations in the walls are ideal to set up a BBQ and tables for food. Not only that, they can also give shelter to a few grown men during showers or from the hot sun (Though it is not advisable to be in a wadi bed during showers, due to flash floods). 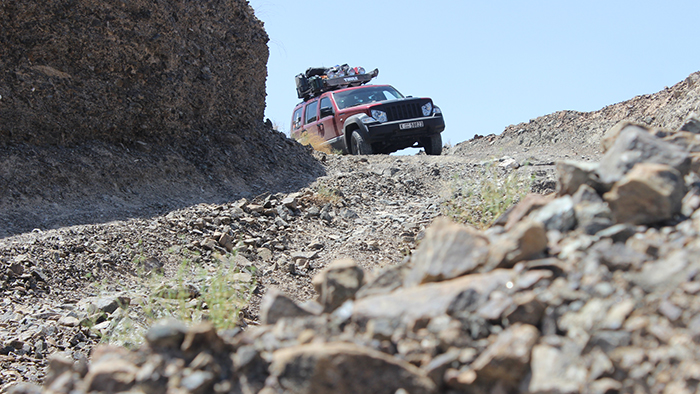 The time caught us by surprise even though the drive was a short one. However by the time we reached the village of Ash Shiyah, the daylight was slowly swallowed by the darkness and twilight painted a perfect picture of mountains in the backgrounds and the giant shadows of the washed-off tree branches and roots. Perfect light settings orchestrated by a professional photographer for a romantic photo shoot would be the closest example. It was crucial that we take the correct turn from the Ash Shiyah loop as the other exit will take you to the top of the canyon through the village – not the intended wadi bed with water. It was another 20mins from the village till we reach the final left turn towards Wadi Shuwayhah. As we turned to the wadi bed, we spotted bright lights emerging from the other end; it didn’t take me much time to identify the convoy. We all stepped out of our vehicles for a minute and exchanged greetings with our good friends: Ooman, Pradish and crew. 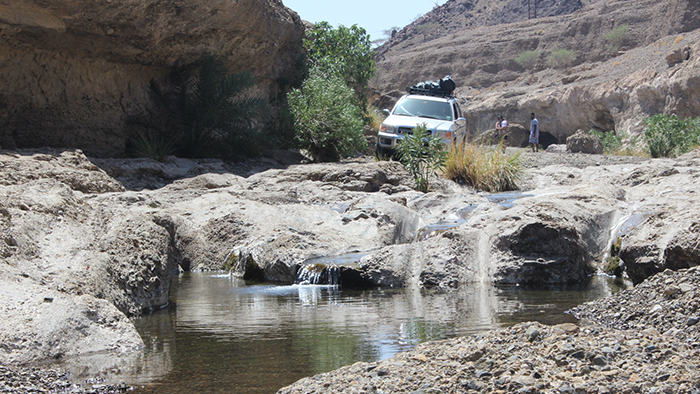 The information from friends, who had just returned from the pools just a few minutes before us, was that the water levels are just fine for families to enjoy. That sure was some encouraging words as we had a few young kids aboard. Our convoy advanced through the dark valley. A few minutes into the drive, some frogs broke the silence. We came to a point where the gravel track comes to an end and then the fun began. Each driver checked the terrain and it was not as bad as we thought. We followed an easy way through a few palm trees which has stood strong against several flash floods in the past. The wheels started rolling, over the occasional water puddles and rocks without disturbing the surroundings. We saw a few water scorpions losing their calm with our footsteps disturbing their relaxing evening. The final destination was finally in front of our eyes at a decent time to set up camp. This time the BBQ was handled by Mitch with usual meat items and add to that we had a rich and colourful Greek salad with sweet potato mash. Can anyone ask for anything better in the middle of nowhere? 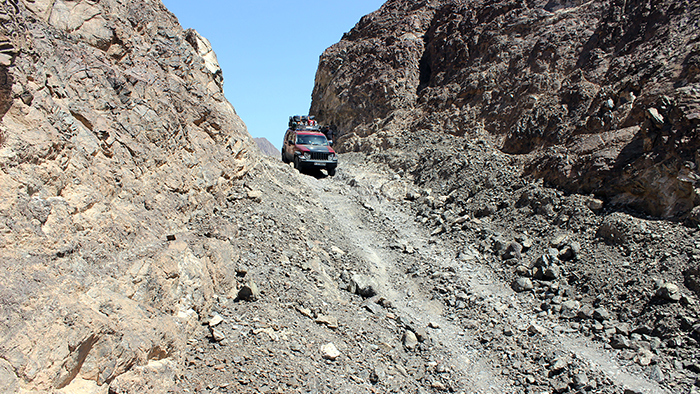 As time passes by the guitars and the drums made their way to the bonfire and evening became colourful for the eyes and music to the ears. We also noticed some rare wildlife while singing around bonfire. The team spotted an Arabian/Sand fox that became confused after seeing and a another crawly one slithering through the rocks on the wadi wall. This created fear amongst some of the family members and they decided to sleep in the vehicles instead of tents. We said good bye to the clear starry skies only around 5:30 in the morning. 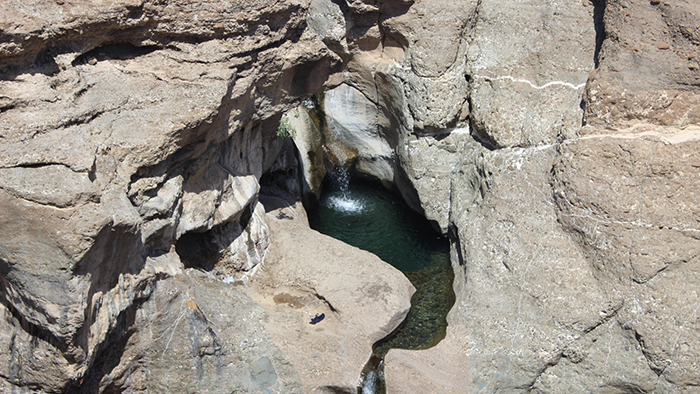 It’s an out of the world feeling, we were woken up by birds not a silly alarm. The noisy frogs have taken a complete day off. The water was crystal clear and everyone wanted to be soaked. This is the kind of experience one could not buy off the shelves or by checking in to an expensive hotel, this comes with a bit of pain and determination. Such trips not only make you happy it also gives you a sense of adventure mixed with ambition. 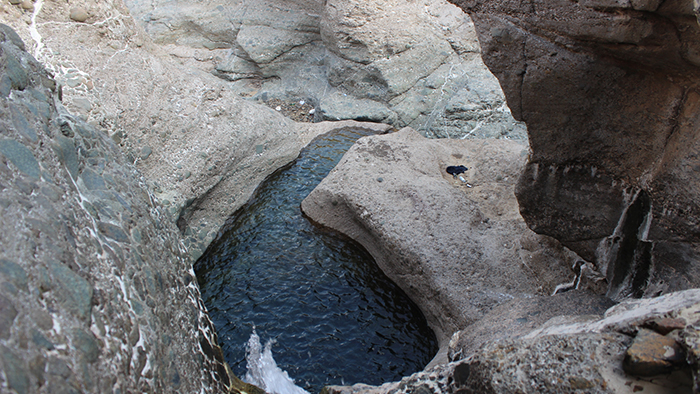 As usual what we call a lazy breakfast was served — sausages, egg, butter, cheese with bread. The task was to pack up as fast as possible and reach the second camping spot before lunchtime. This is the day everyone on the team was waiting for. The drive was supposed to be extreme and we are in search of a hidden water basin middle of a wadi. The reason we insisted on reaching the point at midday is that the hidden basin of water has to be approached with extra caution and daylight is our only saviour. 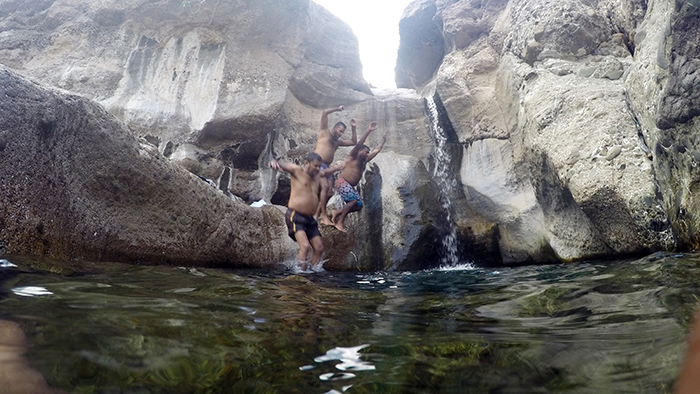 As we started crawling our way out of the wadi, we met a British couple and they were all up for bit of an adventure and started following us. It was the usual gravel track all along until we came to a point that we had to put our fully loaded rigs through a test. The route became challenging every yard we drove. Narrow passages and technical turns where the slightest miscalculation could have caused a disastrous rollover to the bottom of a wadi. Most of the points, we had spotters to guide the drivers to the correct path. The passengers were asked to go by foot at points to make sure the weight was correctly distributed in the 4x4s. The SLOL team believes that an “accident free trip will always remain a good memory”. We gave enough time to our beloved vehicles to negotiate the rough patches. Based on the capabilities, some vehicles opted for alternate routes. We finally passed the small Ghaf tree patch to the left side of the wadi and came to the final destination for the day the “VIP Ghaf tree” as we call it . It is in middle of nowhere at the beginning of a rocky descent. It is the ideal camping spot. 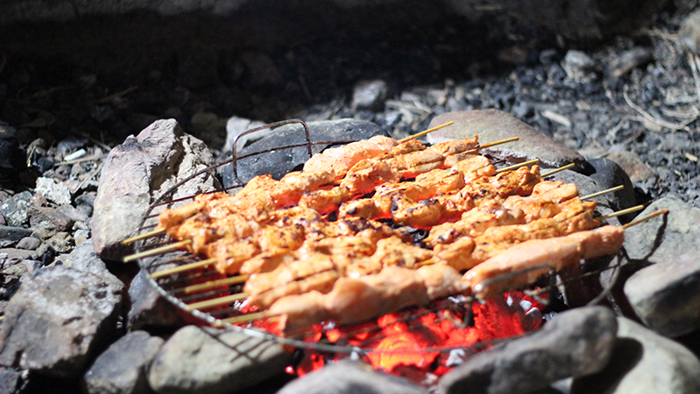 Some started preparing the lunch while the others walked down to the hidden pool. As we mentioned earlier, the way down was not easy for all to make it to the hidden pool, so we had to settle the small ones and some of our family members in smaller pool before the main one. It was so nice to see all the kids including my one year old daughter splashing water. The hidden pool was such an amazing place, it has slightly a bigger pool where few can swim. Five grown men can sit and have natural Jacuzzi experience. Water flows from one end and circles inside the basin before it creates another small fall to the next pool. It’s clear and the right temperature. Though we wanted to spend more time in pools, we decided to reach the safe zone before the darkness sets in. 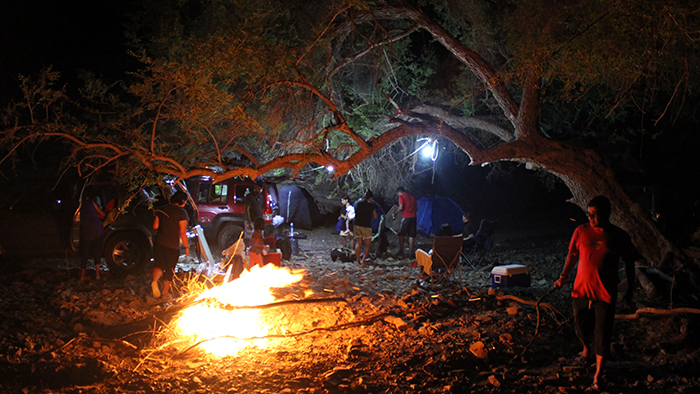 The cake was just covered with a layer of chocolate and small dinky toy to remind mud and love for 4×4, a candle to mark her age and another small one singing happy birthday. The guitars and drums harmonized the birthday tune for my one year old daughter to cut her first birthday cake. The dinner was served around 7:30 p.m. and perfect timing for a sing-a-long session. After a couple of hours of singing and chitchatting, we retired to bed quite early. Around two in the morning we saw a skulk of desert foxes sniffing around the camp site. I am sure the smell of leftovers invited them. 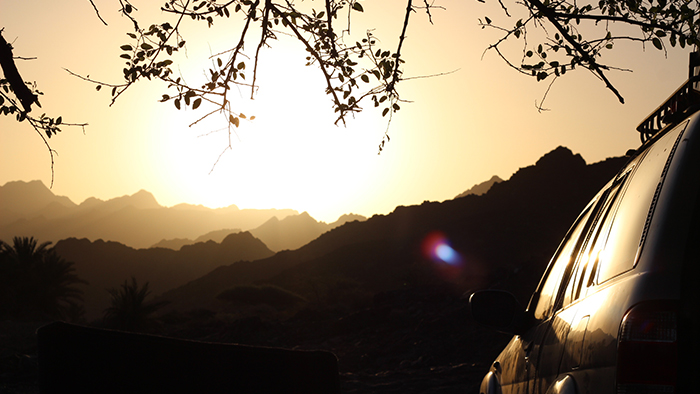 We knew the next morning was going to be a relaxed one as we had only one more place to reach before our trip ends. Some got up early and started serving breakfast, this time Sri Lankan style curries with bread. A heavy breakfast is a usual remedy for a long day. There was another one and half kilometres of off-roading left to cover before we hit the newly paved blacktop. It’s a pity – a few years ago the whole road coming from Hatta pools was a dirt track that was busy with 4x4s and is now a main road connecting Hatta and Buraimi. The waterfall is located by the road. From the flat grounds, we parked the vehicles and we had a great view of the waterfall. Small streams of water gently falling in to larger pool of clear water and from the first pool another smaller fall is created on the bed of the main wadi. Nature has created beauty in a way the main pool can be only reached by climbing a short but very difficult section but worth the dive in to the deep pool. The women and the kids found a spot near the second fall and had great time. We started packing up just before the lunch and thought we will head out to the UAE and have lunch but it never worked as intended as the restaurants were all closed due holidays. We finally found a place open in International City. Finally after three days of wilderness we had to sit around a table and have a meal. We bid goodbyes after the meals with a note of sadness that we have to return to our routine lives again the next day; however with a gleam of hope another great trip will be planned soon.

It was another great family trip put together by Sri Lankan Outdoor Lovers in UAE stay tuned for more such outings. #forbetteroutdoors.