Lost in the Middle of Omani Desert Made the Best 4WD Travel Ever!

Each time I think of our Oman travel, I get goose bumps. Travelling to this little known Arabic country was a decision which Simon (my husband) and I made overnight. We did not know anything about it, except for the fact that it gets few foreign visitors, that it’s perfect for off-road driving and that wilderness camping is allowed.

Oman lies just under the more famous UAE and contains vast areas void of life. For us, renting a 4WD was the best option to really get a feel for what Oman is all about.

Landing in its capital Muscat, did not convince us to stay long, as this modern and fast growing city cannot really compare with the adventure we had been looking for. We stocked our rented Toyota Land Cruiser with water and food supplies and were ready to roll.

As soon as we came out into the open, we were greeted by mesmerising views of untamed countryside. Driving through small coastal towns, where fishing represents the main economy, was like travelling back in time. Goats roamed in the middle of the street, while men rested in the shade talking over a cup of coffee. Combining these sights with the fact that hardly any women were out, we deduced that Oman is still a very traditional country.

Even though our Arabic is limited to a simple greeting, “As-salamu alaykum”, they appreciated the efforts made by us foreign travellers. The language barrier outside of Muscat can be a challenge, but show and tell always works and turns simple conversations into a comedy for all. 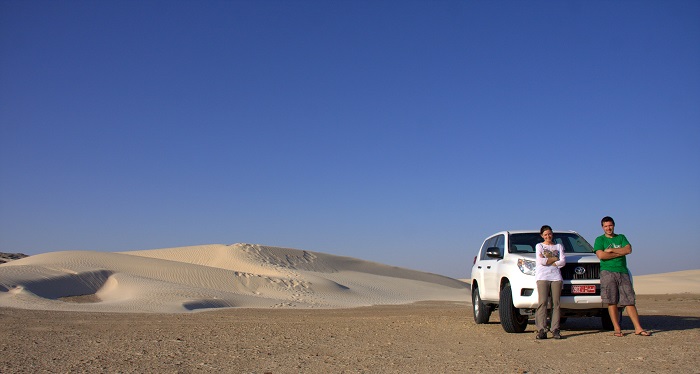 Even though we tried to blend in by wearing long trousers and shirts, we could not really hide. People stared at us constantly, but we quickly got used to it. They mean no harm; it just does not happen often that they see travellers from faraway places.

The long distances between major attractions demonstrated the diversity and richness of Omani culture and history. Due to its strategic position, Oman has always been a tempting conquest. As a result, there are more than a thousand fortresses throughout country. These strategically placed outposts have the most amazing views on towns, oases, mountains, rivers, beaches, wadis and deserts. The stunning views make you realise, that even its dry landscape makes Oman amazingly beautiful and diverse.

The further we travelled from Muscat, the rougher the roads became. We finally found ourselves off the beaten path and could not have been happier. For the most part, Oman offers good asphalt roads, but small towns and remote villages can only be reached by dirt roads. We happily found that the poorer the road conditions, the nicer our destination, including Bilad Said – the most beautiful village in Oman. Reaching it was quite a challenge, especially because the steep and narrow track, where sometimes not even two mules can pass. Asking for directions was futile, but sometimes the best and most memorable things happen when you are lost.

Our biggest wish during the Oman travel was visiting Wahiba Desert, home of the sand dunes. There is no greater joy and freedom than driving over the first, second and third sand dune, knowing it does not end there. Deserts are no doubt a big playground for off-road enthusiasts like us. 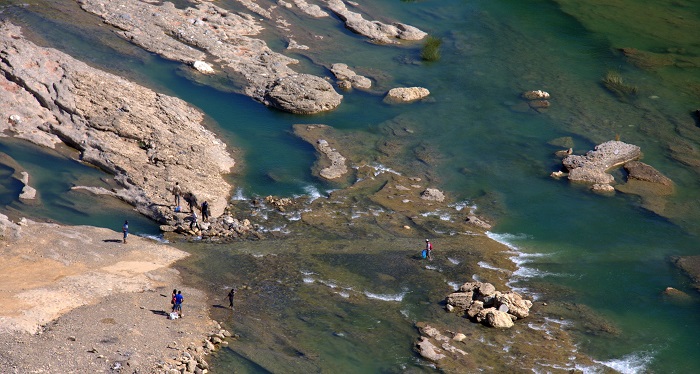 As we drove, the dunes became increasingly bigger, until 200m dunes soared around us. The day was ending and we decided to pitch our tent under one of them. The sense of freedom created by these vast and remote areas is indescribable, and only intensified by the starry sky above us. It was perfect!

Even though we have never driven on our own in a desert, we decided to go deeper the next morning. There was a solid track marked on our maps, which made us feel confident. But a feeling was actually all it was. The hot sun was blazing and there was not a single person or animal in sight. It was just us and sand – and lots of it! After a few hours of driving, the track we followed became less and less visible and the sand dunes around us were getting higher. Even the camels and the occasional nomadic tent had disappeared. Suddenly the track ended when we realised that we were lost!

The adrenaline started to kick in hard and tension was rising. Instead of smiles, our faces became serious and worried. What now? Where to? Should we turn back? Should we go left, right or just continue the direction we were driving? We were stuck right in the middle of 4,800 square miles of sand! We tried to ignore the “what if” questions and were desperate to make a good decision that would lead us out of this mess. We did not have a compass, satellite phone, or even a shovel. Crossing the desert was not in our original plan at all. We were completely unprepared for everything we were doing, but it was too late now to have regrets. We had to react, and we had to do it fast! We just hoped that the car was well maintained and that the suspension wouldn’t break after all the bumps and abuse it received from driving up and down the sand dunes. At least we had a full tank of gas and enough water to last for more than a week. 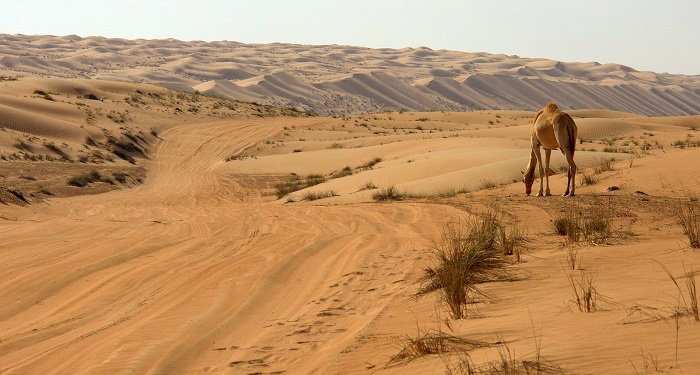 We decided to drive south, as we eventually would hit the ocean road. We used the sun as our compass and looked vigilantly for anything other than sand. It was deadly silent in the car, when I suddenly screamed out in relief. Oddly enough, the cause for my shouts was the camel dung lying all over the sand. I thought, “there must be people somewhere close”. Driving further south, we saw a camel again; soon came more. Our encouragement increased, but we were wrong again. There was nothing, nothing except new dunes, new sand and new disappointment.

We were feeling completely devastated when the flash of a sun reflection came from somewhere. “What was that?” we asked in unison. Our eyes almost popped when we saw a car! “Oh my goodness, it is a car! We are safe, we will not die and we will make it out alive!” I was totally overwhelmed with emotion and breathed a sigh of relief.

Simon took a sharp left and after a mile or two, we reached a nomadic tent, where men were sitting in the shade of a tree, talking, drinking coffee and eating hawla, a traditional Omani jelly-looking dessert. I am not sure who was more surprised to see each other, but within moments they were shaking our hands, offering coffee and lunch and creating a place to sit with them in their circle.

We showed them our map and pointed to where we wanted to go. It was time again for another game of show and tell. An older bearded man with a scarf on his head was not displaying a promising expression on his face. It looked like we are still far from any desirable civilisation. He started to draw some directions in the sand, but we were completely at a loss to understand him. A loud discussion arose between them but all Simon and I could do was look at each other in bewilderment. Then one of them stood up and walked to his car, saying: 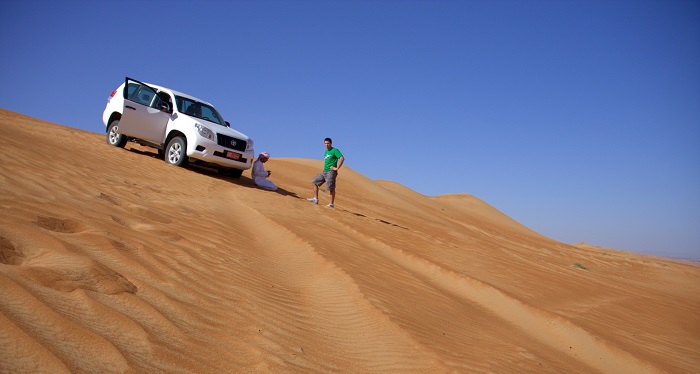 “Yalla, yalla!” Meaning, “let’s go, let’s go”. He started his car and we did the same. We zigzagged behind him through the dunes for about 30 minutes when he stopped in the middle of nowhere. What now, we were wondering, when he got out of the car and started walking towards us. Another round of charades ensued and we figured out that he was showing us the direction to a T-cross where we should turn left.

Before saying goodbye, we reached for some money to give him as a token of our thanks. This simple gesture did not seem enough for the sacrifice he made for two complete strangers. To our surprise he just raised his hands up towards the sky and shook his head no. My Arabic is bad and does not extend past a few basic words, but it sounded as if he tried to explain that this is something Arabic people do – helping others in need, especially if they are guests.

Our adventure continued for several more days, but from the safety of our home, we can now say that this is our best memory of Oman. We know now that crossing a desert without any knowledge, equipment or a real plan was one of the most stupid and dangerous things we could have done. It was also very humbling. Reaching home safely felt like winning the lottery. The thought of what could have happened in that desert makes me shiver. Mother Nature taught us well and we should never underestimate her. On a positive note, getting lost in the middle of a desert showed us that acts of human kindness still exist – people who have nothing, but are willing to give you their last piece of bread, and not expect anything in return, are still out there. It does not really matter where in the world you travel, all you need to do is open your heart and mind and they will come to you.