Adventures in The Unimog: The Maiden Voyage to Oman

Words and Photos by: Rachael Bruford

What on earth is a Unimog? I hear you ask. I asked the same question when my husband first mentioned getting one about a year ago, but have since discovered that there are a significant number of blogs dedicated to these vehicles and their fantastic off-road capabilities. They’re made by Mercedes-Benz and are basically medium-sized trucks/tractors, often used by the military. In fact, our Unimog enjoyed a previous career as an ambulance in the Abu Dhabi Military (I doubt it ever saw any action) before it came to us. They’re suitable for going over a range of different terrains, meaning that we can make trips through the desert with ease and cross rocky areas without too much stress. It also has a pretty high ground clearance, which helps reduce the risk of us getting stuck on a dune. It’s by no means a fast vehicle, with a top speed of about 80kph, but it’s sturdy and reliable despite being only six years younger than me!

We’ve since taken out the insides and have started to build an interior to make camping trips more cosy, and have also installed air conditioning in the cab. There’s a lot more work to be done but we have done enough to allow us to go away for a couple of days at a time. It’s an ongoing project that will hopefully one day allow us to make lengthy trips, exploring countries off the beaten path and sleep wherever we choose to pull over. This short trip was a way of testing what has been done so far, and finding out what things need to be taken care of pretty soon.

In our usual fashion, we were pretty slow in getting organised and left the house at about 4:00 p.m. We also had to endure a trip to the supermarket to buy some food to sustain us for a couple of days, so in reality we probably hit the road at about 4:45 a.m. heading to Oman via the border at Hatta. We drove through sand dunes as the sun began to set.

Reaching the border, we experienced what I feel is going to be an ongoing issue when leaving the UAE. As we are not a commercial truck (and because the truck queue at the first border point was ridiculous), we tried our luck by going through the car queue. Uh oh. We were promptly told off and directed to the truck queue. Then we were stopped as my husband tried to explain that we were merely a camper van, not a truck with goods on board. The solution was for them to allow us to push in the truck queue, and we made our way to the next border post. There were so many checkpoints and border posts that I have forgotten what happened where, but at one point we stayed in the truck queue only to be directed to the car queue, and vice versa. Some of the immigration officials were so intrigued by the Unimog that they insisted on having a look, which was lovely but it also slowed us down – although we did get given some coffee by one very kind man! Reaching the Oman border, we had to park the Unimog on the side of the road to go and get our visas, rather than leaving it in the car park, because of course it’s not a car. All in all, it took us over an hour to officially enter Oman, and the sun had well and truly disappeared by the time we set off for our destination: Sawadi Beach.

So far, we had noticed two things that needed fixing. The first was that the cab desperately needed cup holders (the above mentioned coffee ended up all over my husband’s lap), and secondly, sound proofing was a must. The Unimog is loud, and we were both wearing ear defenders. We attempted a conversation a couple of times but on each occasion it went like this:

Me: How much further is it?

Hubby: What did you say?

So the journey was pretty boring with no chatting paired with a dark, straight road. We eventually reached Sawadi just after 10:00 p.m., and pulled up to go to sleep. The bed was extremely comfortable, just like being at home, and I was excited to wake up and see the sunrise over the sea.

After spending the day at Al Sawadi, we had a spot of lunch before making our way towards the mountains where we intended to spend the second night. Before we rejoined the road, we had another drive along the beach, taking in the beautiful surroundings. It’s one of the many things I love about Oman, from beaches to mountains to sand dunes to wadis, there are so many different landscapes that are as stunning as they are unique.

As we had been pretty unorganised before leaving the house, we didn’t have a specific route planned, and once again sunset was quickly approaching. This is something I’d do differently next time. It’s all well and good to just roam about and see where you end up, but it’s also nice, especially if time is limited, to have options that you know will bring you to a safe and scenic place to spend the night. As it was, we ended up on very rocky terrain, near a burning rubbish tip, with the mountains tantalisingly close. However, we didn’t want to risk continuing in the dark in case we shredded a tyre on the jagged rocks, so we pulled up for the night and finally cooked our stew as we watched increasing numbers of stars appear in the night sky. 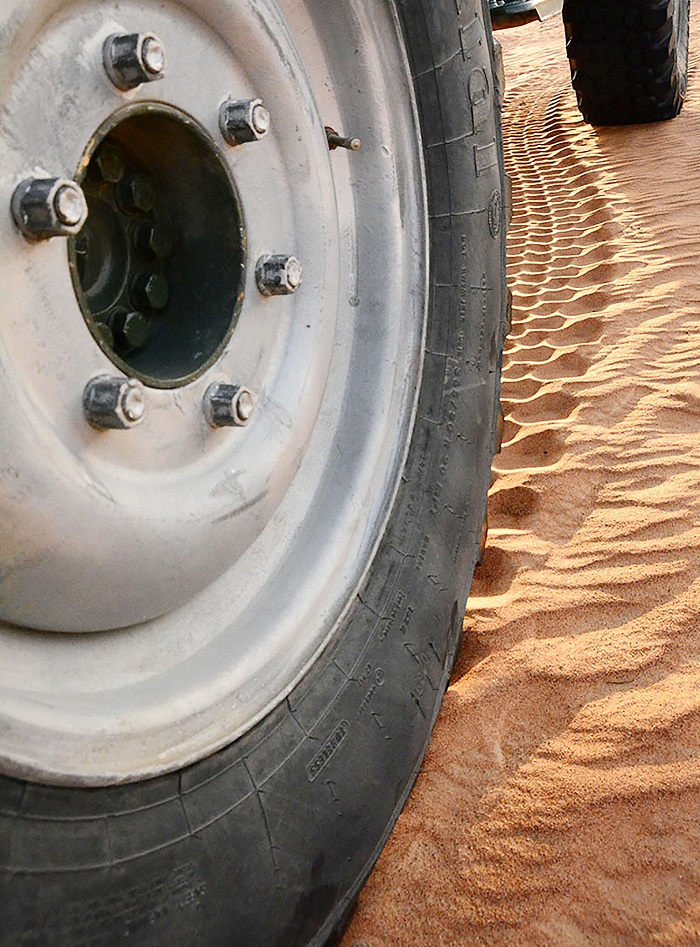 The following morning, we realised that we were very close to a road that would have taken us straight to the mountains. And after taking our time over breakfast, we took the road and ended up in a small village. There was a fort and some very curious local boys who seemed just as intrigued by us as we were by their village.

We drove around, happy and aimless, for an hour or so before once again being surrounded by rocks that threatened to puncture our tyres. Nonetheless, the Unimog did well and I now have much more confidence in its abilities.

Reality was calling and we made our way slowly back to Dubai after rejoining the main road. Once again we had issues at the border, with some telling us to go in the truck lane and others telling us off for being in the truck lane. I think that this is something we’re just going to have to get used to.

What we’ll work on next time…

So the work on the Unimog continues, and we’re looking forward to many more trips in future. I’d love to go to Liwa, so the next time we have a couple of days off it looks like we’ll be heading to some very impressive sand dunes!