The eagerly awaited 26th Edition of the Abu Dhabi Desert Challenge rolled into town on the 31st of March, commencing with documentation and scrutineering before the competitors moved south to Liwa on 3rd-7th April.

However, before heading to the sand the drivers and riders took part in the Super Special Stage which was held this year at Al Forsan Sports Resort; a time trial to decide the starting order of day one, as well as providing a chance for the city dwellers to catch some of the world’s best rally drivers in action on their doorstep. Most of the bikes and cars sped round the course without incident, however Italian Buggy driver Eugenio Amos took a corner too fast and performed a manoeuvre more befitting a gymnastics arena – a full mid-air roll, landing on his wheels thankfully, but causing significant suspension damage. 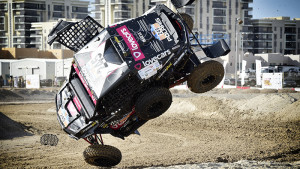 Special Stage one takes the riders from Razeen, a little over 100kms outside Abu Dhabi, to the west end of the Liwa Crescent just 30kms to the grounds of the magnificent Qasr Al Sarab Resort which is the rally base for the week (also known as the bivouac). For the fourth consecutive year I was fortunate enough to lead the team tasked with driving the official camera crew deep into the desert to catch the best of the rally action, however, not for us luxury five star rooms; instead, like all the event marshals, camping was the order of the day – although we did enjoy the bivouac village with its showers as well as catering tents and chill-out rooms.

The Abu Dhabi Desert Challenge powered by Nissan is a unique event; most cross country rallies are progressive, with the bivouac relocating daily to the end of the next stage, however the ADDC has a static base which means that competitors who do not finish one day can restart the next. Penalties apply, of course, for any passage control missed, however, for some private riders and drivers they are content with just making it through the week and starting each day. 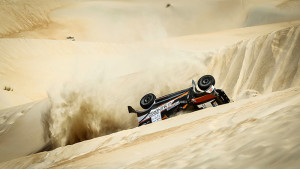 Special Stage two started near Madinat Zayed, meaning an early wake-up call for all to be in place for the start of the stage. For the bikes and quads, the start is a little different from usual – the first 10 bikes are flagged off at one minute intervals and for the rest of the field, they are set off en-masse in groups of 15; this makes a great spectacle for our drones and the helicopter cameramen and interestingly, some 60 or 70kms later, the bikes are still in “clumps.” With over 230kms liaison (road) sections added to the 279kms off-road, this is a long day for the riders but Chilean rider Pablo Quintanilla took the honours today. 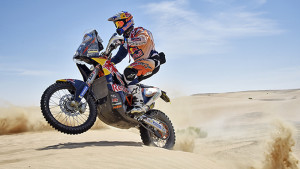 The third special stage sees the best day for cameramen and photographers as the field takes to the mighty Liwa Crescent area. Each day the terrain has differed and today the magnificent slipfaces and sabkhas are the main attraction as the riders and drivers propel their machines at maximum speed over the salt flats before slowing down slightly to pick their way across some tricky dune crossings. My cameraman is stationed just a few kilometres from the stage start, on an all-new part of the route for the rally and as a Liwa rookie he stands transfixed by the rugged beauty. Not for too long of course, as there is work to be done as firstly the bikes, then the cars come through. We are stationed at the third waypoint in but reposition when we notice that there seems to be some camera-worthy action at the next point, where countless cars are making heavy weather of a bowl! The top three bikes were once more battling it out on the sand with Helder Rodrigues eventually winning the stage.

On Special Stage Four the rally once more commences just south of Madinat Zayed as the riders head south west, ducking under the Arada-Ghayathi Road for a loop out west before crossing the road again as they head east through the Liwa Crescent, finally emerging on the E90 close to the Qasr Al Sarab gates. This was the day when number one seed and two-times ADDC winner Vladimir Vasilyev crashed out of the race – literally – and he returned to the bivouac via road. Incidentally, this was the only stage Nasser Al Attiyah did not win, the honours going to car #205 with Mikko Hirvonen. The Moto category saw a stage win for French rider Pierre Alexandre Renet and a third place for local rider Mohammed Al Balooshi.

Special Stage five, commencing less than 20kms from the Qasr Al Sarab saw the rally wind its way up the Al Hamra desert area before finishing at the start point. With less than three minutes separating the top three riders there was all to ride for in the Moto categories but barring an accident, stuck or a mechanical problem the Auto seemed to be in the bag for the number two seed, Nasser Al Attiyah. Nevertheless, he powered through the relatively easy terrain at full speed, winning the stage by beating Mikko Hirvonen by over two minutes. 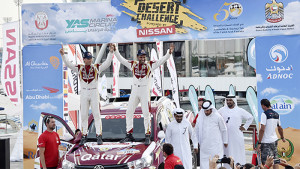 The last time the Abu Dhabi Desert Challenge Auto category was won by a GCC national was back in 2008, when Qatar based Nasser Al Attiyah was victorious. This year he reclaimed his place as the top driver with a win in only 17 hours and 14 minutes, over 30 minutes ahead of second placed Yazeed Al Rajhi from KSA. Further down the field, local expat favourites Ian and Sheila Barker came across the podium in 23rd place which was impressive since the first three days they had a few stucks and minor problems, however a sterling performance on days three and four saw them rise through the ranks.

Both auto and moto provide some thrilling motorsport action but this year the moto category was particularly hotly contested with the winner of each stage changing daily, until stage five, when the overall winner, Toby Price took his second daily stage win, having been the fastest on his debut in Special Stage One. Dubai based Sam Sunderland, having missed the Dakar due to injury layoff, gave a steady performance each day, not winning a daily stage but overall coming in in second place, just two minutes and 10 seconds behind the winner.

After his last victory in 2014, Poland’s Rafal Sonik once more took top overall place in the quad category, even although he did not win any of the daily stages. Throughout the five days he put in a steady performance, taking care to avoid incurring penalties which was the key to his success.

One thing which really surprises desert drivers who travel through the Liwa area – the cars are faster than the motorbikes! The top three bikes completed the course in just over 18 hours and 18 minutes, over an hour more than Nasser Al Attiyah in his Toyota Hilux! 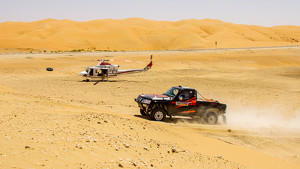 The weather in the UAE during March and April can be unpredictable and with last year’s SS5 being cancelled due to a huge sandstorm all eyes were on the forecasts this year. These predicted a high chance of rain, thunderstorms and windy weather and all but the thunderstorms came true. Abu Dhabi Desert Challenge 2016 had the coolest weather ever for the event, with daytime temps in the main under 30C and cool night-times of around 12-15C, which had us campers reaching for an extra blanket before dawn!

Photos by: ATCUAE and Marina Bruce