A day that began with the GP2 and GP3 Series titles being decided ended with first-time championship glory for Mercedes driver Nico Rosberg and a sell-out concert featuring pop superstar Rihanna.

Germany’s Nico Rosberg was crowned the new FIA Formula 1®Drivers’ Champion after picking up the points he needed to claim his maiden crown on a pulsating day of motorsport action at Yas Marina Circuit.

A tense and action-packed 2016 Formula One Etihad Airways Abu Dhabi Grand Prix ended with Britain’s Lewis Hamilton storming to the chequered flag from pole position. Rosberg, the 31-year-old German Mercedes driver started in P2, and kept station behind his team mate throughout, before crossing the finish line in second place to then climb onto the podium amid a spectacular fireworks show as winner of the championship for the first time.

Al Tareq Al Ameri, CEO of Yas Marina Circuit, said: “Congratulations to Nico on becoming FIA Formula 1® Drivers’ Champion, and a special thanks to all teams and drivers for putting on such a fantastic display of racing for our sell-out crowd to enjoy.“It has been a wonderful four days of entertainment at Yas Marina Circuit and Yas Island – from the on-track sporting action to the varied activities and entertainment in our Oasis areas, on the Island, to the unforgettable After-Race concerts. We set the bar higher each year and this year, Abu Dhabi and Yas Marina Circuit have once again proved that we can put on a show that rivals any sporting and entertainment event anywhere in the world. Thanks to everyone who came and contributed to an incredible atmosphere throughout race weekend and we look forward to seeing you all again next year.” 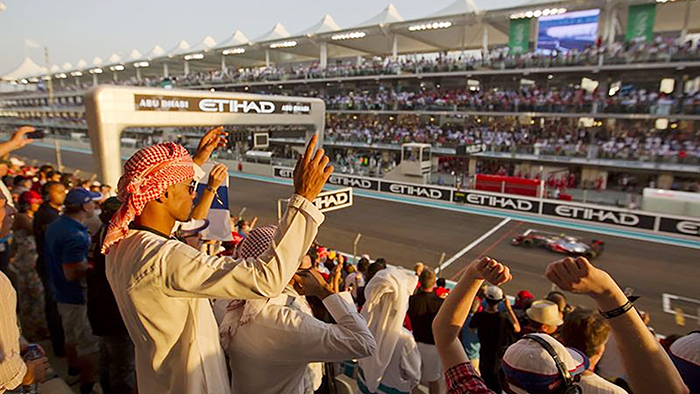 A capacity crowd of 60,000 people were treated to a full-day feast of sporting action and entertainment on a sun-baked Sunday at Yas Marina Circuit. Fans got an early taste of the exciting action to come when the young guns of motorsport battled out a title decider or their own in the season-concluding races of the GP2 and GP3 Series, with Charles Lerclerc and Pierre Gasly claiming the top honours in the two championships, respectively.

A host of activities in Yas Marina Circuit’s four themed Oasis areas kept kids and adults entertained during the afternoon with driver autograph sessions, race simulations, live music performances, UAE cultural displays, and much more. Then heads turned to the skies above Yas Marina Circuit rather than the track as an Etihad Airways A380 and the seven jets of Fursan Al Emarat performed a stunning UAE national colours fly past.

At exactly 5pm it was time for the main attraction, one that brought in visitors from the UAE and dozens of countries all over the world; the title-deciding showdown between boyhood friends turned fierce rivals Nico Rosberg and Lewis Hamilton. Fifty-five laps of breath-taking action played out under the setting sun, then illuminated by the Circuit’s iconic floodlights, that ended with a tearful and jubilant Nico Rosberg lifting the FIA Formula 1® Drivers’ Championship trophy. The enraptured crowd watched the action live from Yas Marina Circuit’s range of world-class Grandstands and from fans’ favourite Abu Dhabi Hill, while millions of others around the world followed live updates and a wealth of multimedia content on the Circuit’s online channels.

With the smell of burning rubber from Nico’s celebratory spins still in the air, it was time to head to the du Arena as global superstar Rihanna brought the curtain down in style with Sunday night’s Yasalam After-Race Concert. Her epic performance of number one hits from her #ANTI World Tour was the last in a star-studded line-up of After-Race concerts throughout race weekend.

You can relive the highlights of the 2016 Formula One Etihad Airways Abu Dhabi Grand Prix on Yas Marina Circuit’s dedicated YouTube Channel, YasTV, as well as the Circuit’s social media channels.