Olga and I decided this summer to run Cappadocia Ultra Trail – a 119km ultra in central Turkey, a tourist area famous for the cone-shaped rock formations and Bronze Age homes carved into valley walls. Best viewing is from either a traditional hot air balloon or the Cappadocia Ultra Trail race. We chose the race. 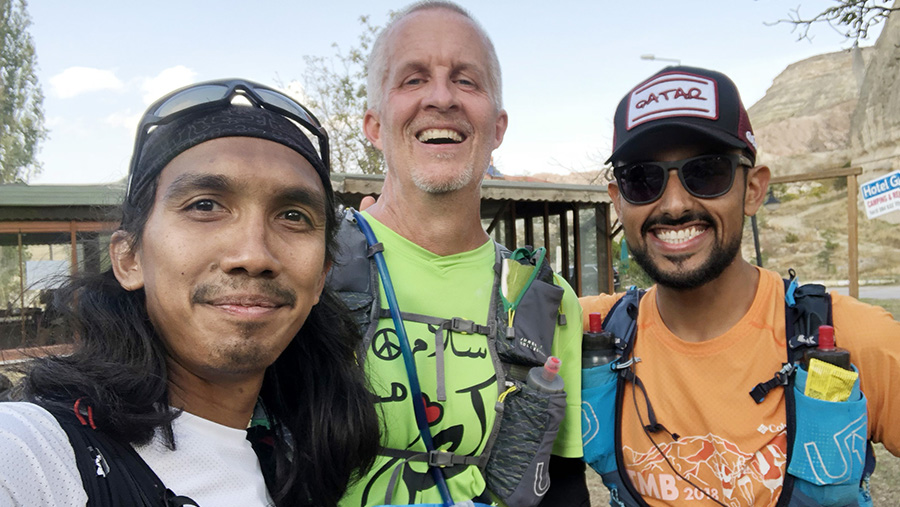 My Running Buddy, Pornsak
When we were at Race Registration to pick up our bibs, we were pleasantly surprised to bump into Pornsak, a Thai ultrarunner based in Oman, who runs all the Urban Ultra events with us. Running with people you know at these big events is such a luxury. Pornsak and I run about the same pace, so we are constantly passing each other over the course: he blasts by me on the downhills and I plod past him on the uphills.
The Cappadocia course takes us through the canyons and valleys where so many of the homes carved into the walls are visible. There are many rural villages between the valleys, where we appeared to be exotic entertainment to the locals confounded by the logic of running between villages instead of riding horses. 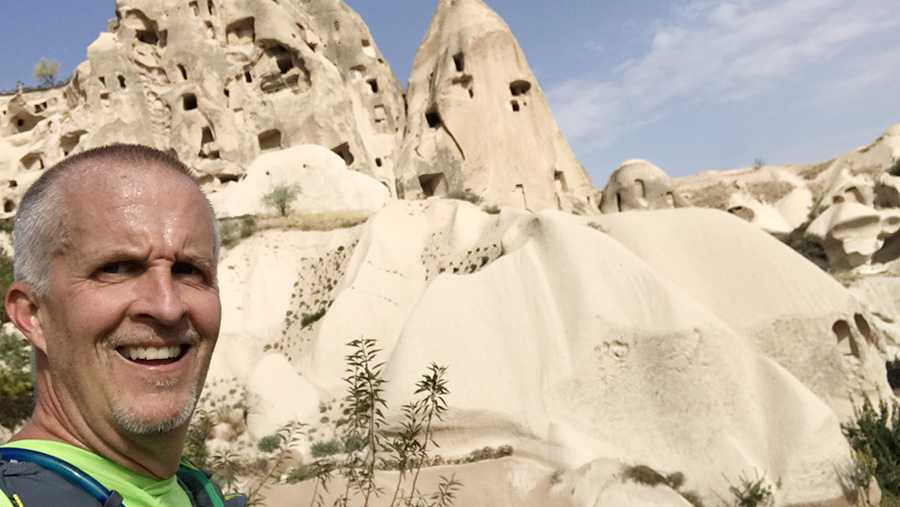 Finding Mubarak
Pornsak and I do not plan to run together, but we know that we will because it always happens that way. He passes me at 3km. I pass him at 10km. He passes me at 14km. We run together for an hour or two from 25km. At 36km, we catch up to Mubarak, a Qatari runner whom Pornsak meet at UTMB CCC event earlier this year. Pornsak catches me again at 62km. The beauty of running is that there is often an instant bond and commonality without any agenda: we love running and running brings together diverse people who share the same passion. 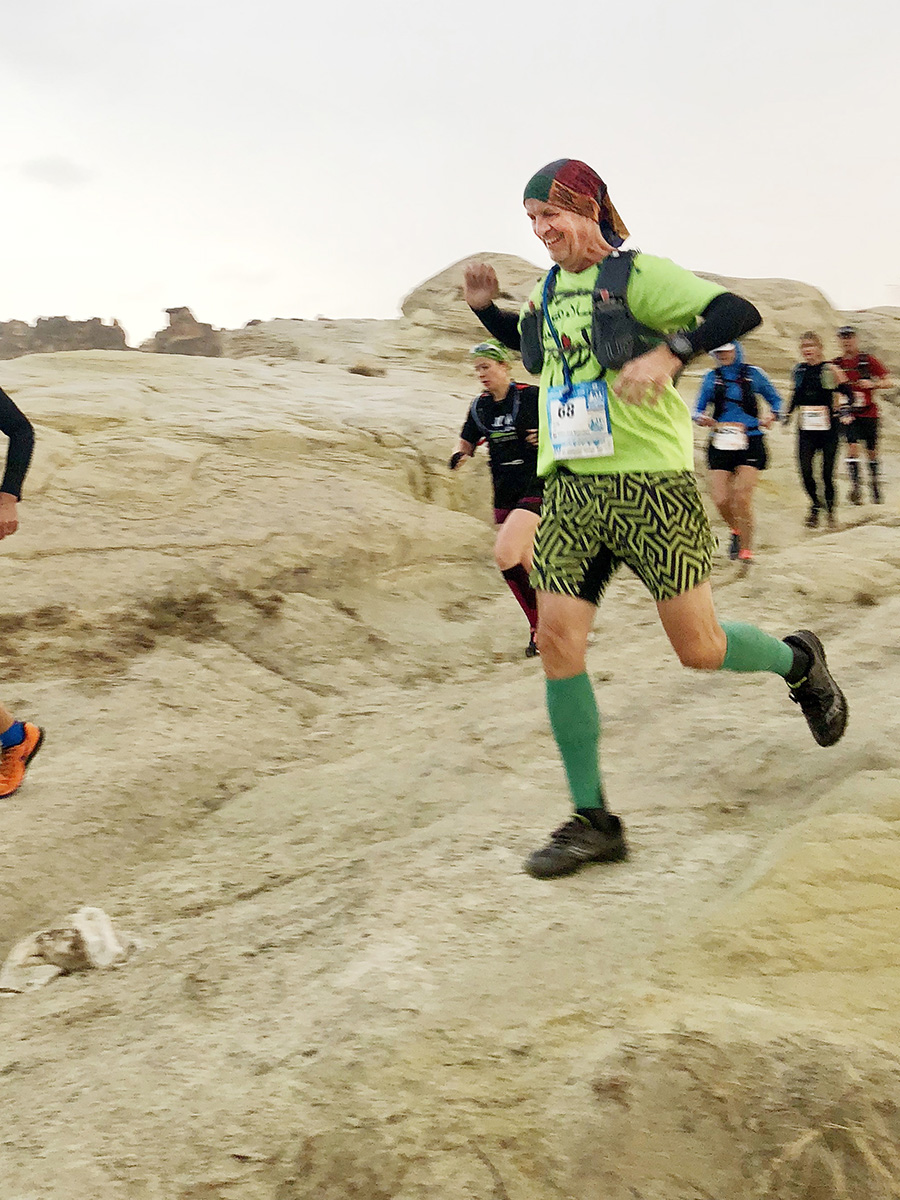 Pornsak caught me gracefully flailing out of control

Dirt + Rain = Mud
Having running buddies on the course make running ultras fun. Sometimes you need some help with your gear or food. Sometimes you seem lost and want to get directions. Sometimes you are losing your marbles and need some support. After 14 hours of running on dirt trails, it got dark and it started to rain hard. I am fine with rain, but I forgot the first chemical formula every five year old learns: Dirt + Rain = Mud. In Cappadocia I discovered a special mud with which they build houses and use as an industrial strength adhesive. The mud was caked 3cm thick on the bottom of my running shoes, causing them to frequently come off. This was an emotional low point for me, as the mud also doubled the weight of my size 48 Saucony’s. 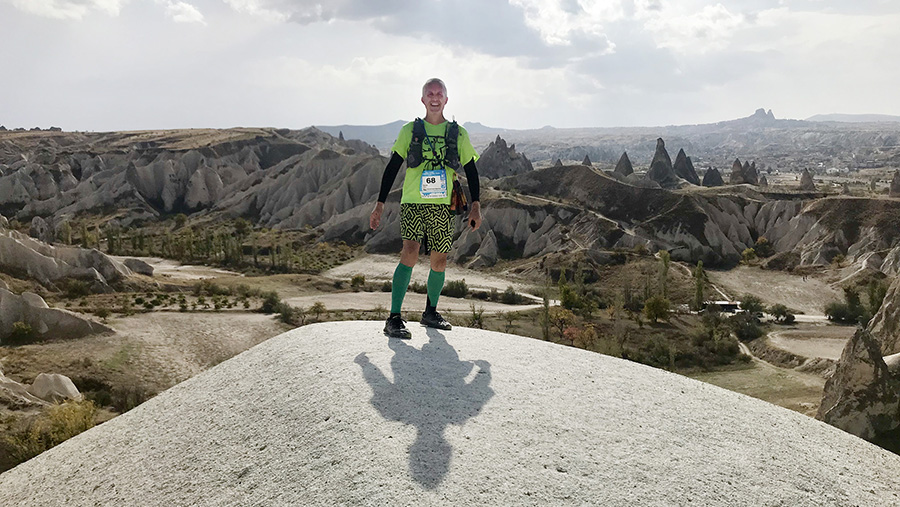 Best Lie to Runners: You are looking great!
At CP7 (75km), I was miserable. Cold. Muddy. Wet. Hungry. I was trying to get food in my system for nutrition, but only with difficulty. I didn’t even notice Mubarak had sat down next to me. As I started to put my head down and cry in self-pity, Mubarak grabs my arm and lifts me up. He looks at me in the eye and says: “C’mon, buddy! You are looking great! You got this!” He was so insistent but pleasant that I had no recourse but to join him on the trail. As we began the slog through the mud to CP8, I began vigorously shivering from the cold and wet. This in turn led me to vomiting, causing me to cramp up in my stomach and legs. Shaking. Vomiting. Cramping. Mubarak smiles and says: “You’ll be fine. Follow me. Go slowly. You are looking great!” 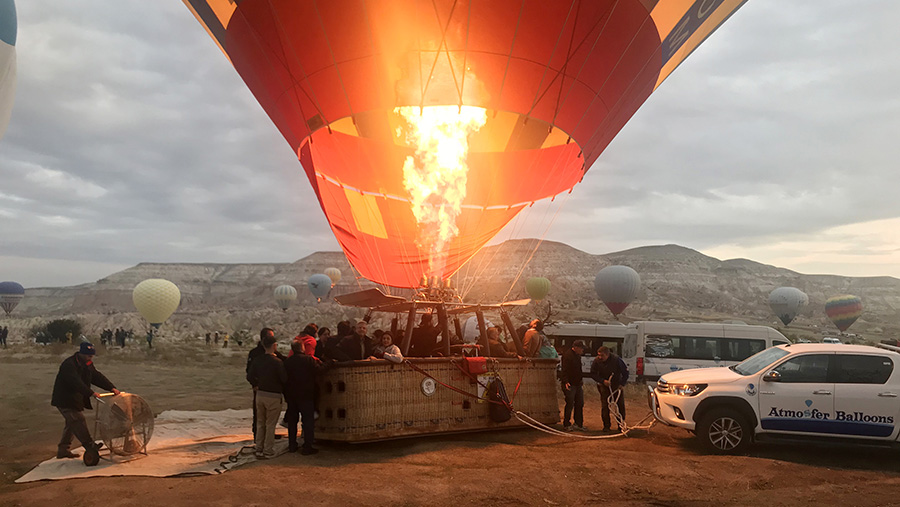 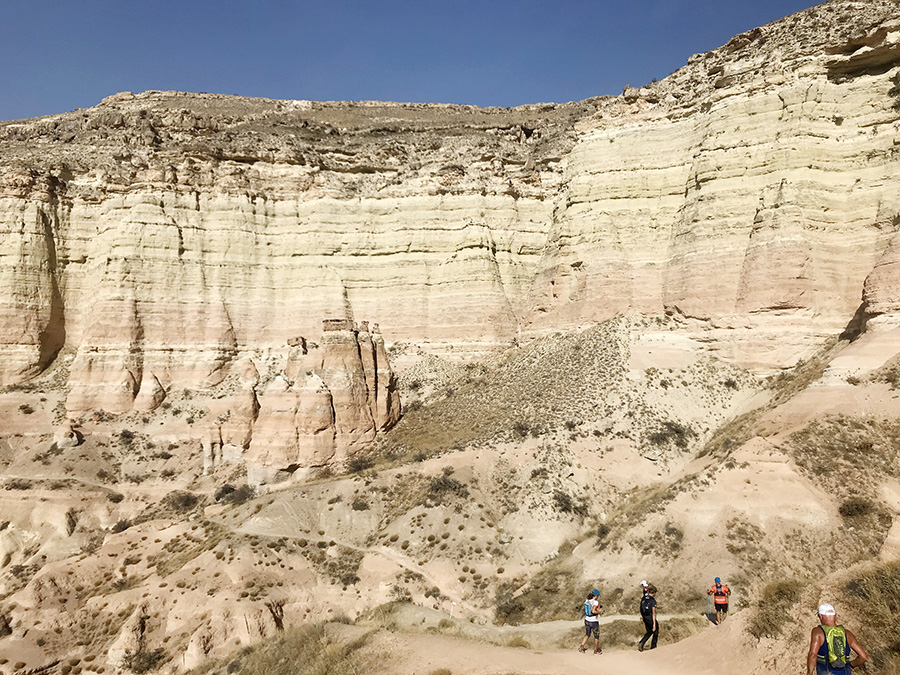 Following Mubarak
If Mubarak hadn’t encouraged me at CP7, I would’ve quit then and there. Instead, I picked up some steam and got my head back in the game. The scenery was majestic – the trail took us across a plateau with no manmade objects or lights visible in any direction. I managed to continue another 3-4 hours with success, before the proverbial wheels really came off between CP8 and CP9. Unfortunately, I had to go another four hours before I could reach the safety of CP9 in 21 hours. It was a great day and a great way to meet a new running buddy. Mubarak, Pornsak and I all entered the Oman by UTMB race, where we would run together to CP5. 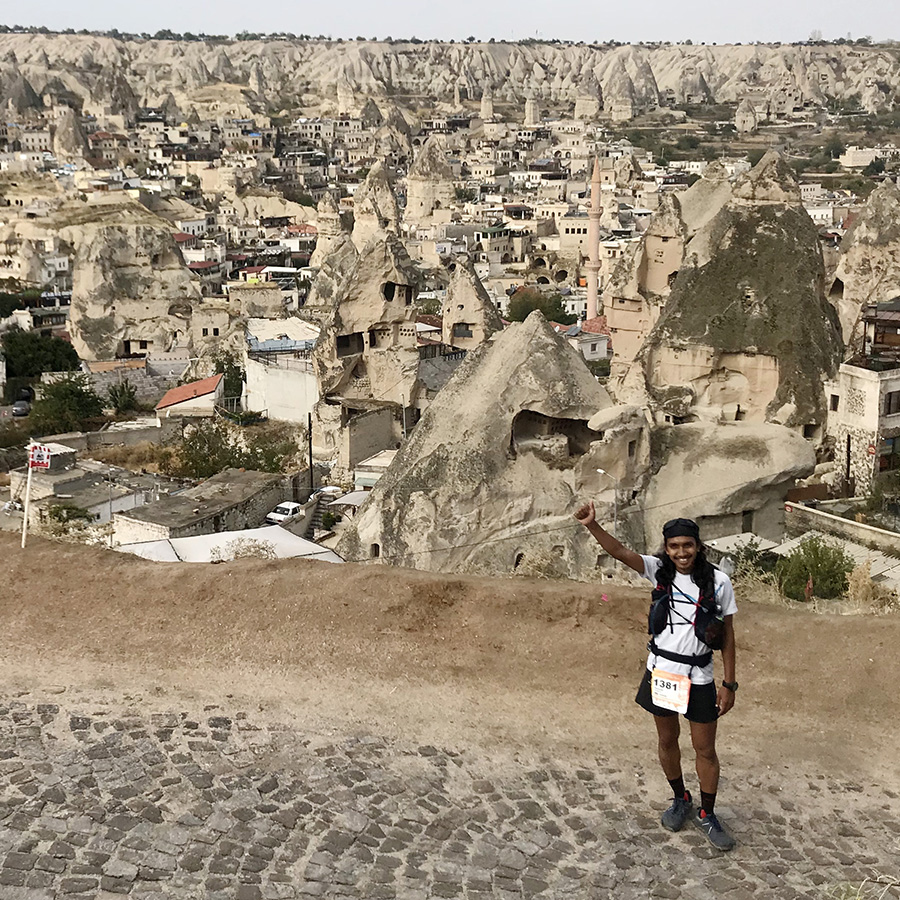 The route goes through old villages

Why Cappadocia?
After running I got back to the hotel at 04:45 and at 06:15, my wife and I were off to the hot air balloons – a true “Must”. I really enjoyed the small hotel where we stayed, which was built into the cliff face. There are three distances for all types of runners, and all the courses go through the exotic cliffs. I recommend adding Cappadocia Ultra Trail to the list of fun running events in the region. Other than the costly flight, it is a great long weekend from Dubai. ■