Picture an island in the Indian Ocean, surrounded by the white sandy beaches of the Maldivian atolls and filled to the brim with the rich culture and tradition of the African continent – that’s the island of Zanzibar. 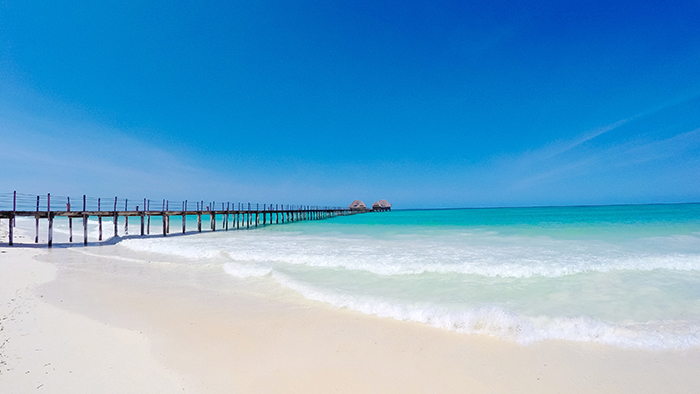 Zanzibar is an island off the coast East Africa, specifically, Tanzania. Once one of the largest hubs of 18th and 19th century trading routes, Zanzibar is of immense historical importance, with a history that mixes in with Oman, Portugal and Britain.

All it takes is a quick 6-hour flight from Dubai and you’ll arrive in 1880. Traditional is the best word to describe this secret getaway, as the beaches are untouched, the canoes are hand calved and the jungles still filled with animated and energetic monkeys. 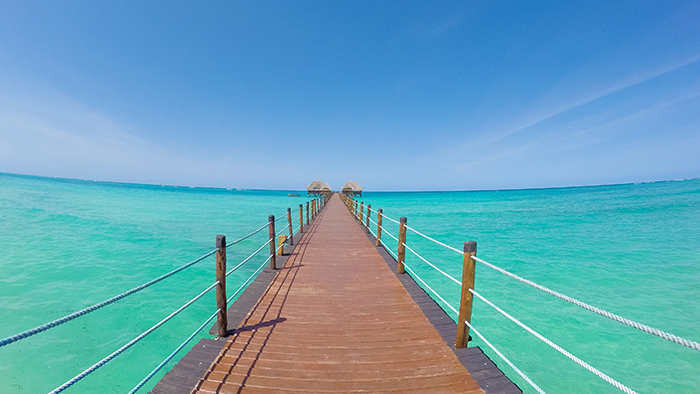 The beaches surrounding the island getaway are some of the best in the world. They begin with a line of tall palm trees, bent slightly toward the ocean as if reaching to examine the crystal clear water they stare at everyday. Below the dancing green ferns, the wide stretch of soft white sand starts to take shape and the picture perfect beach begins to form. Moving down the sand, toward the ocean, looking left and right, the true expanse of this faultless coastline is revealed. The sand extends kilometres in both directions, with the very same bended palm trees towering above it all the way. The only man made features interrupting the flawless stretch of smooth sand are hand-carved outriggers left for the day by local fisherman or the occasional old-style jetty extending out into the water allowing people to reach boats in the deeper channels during low tide. Walking further down the beach, you eventually reach the clear water quietly hugging on the sand with continuous sets of small waves to follow. As you look out toward the horizon, you’ll gaze upon a mosaic of different shades of blue, darker where it’s deeper and turquoise where the sand is right below. Its scenery and beaches like these that provide us with our images of paradise that serve as the inspiration for everything from novels to films. 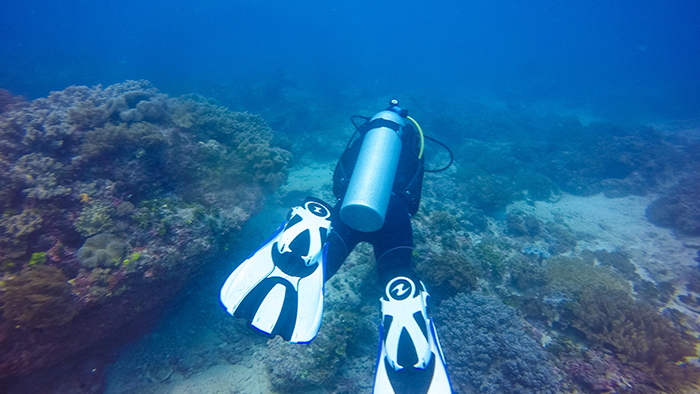 With many great diving locations, the experience begins only once you’ve entered the water, however, on the island of Zanzibar; the adventure begins at the very start of the journey.

For us, it started on the edge of cliff, with a staircase carved into it, fenced with wooden rails. The view from the top of the cliff overlooked the entire stretch of the beach, from the very beginning of the line of sand, across the exposed rock and coral that make their appearances at low tide, all the way to the deeper channels where the boats can pass through. We followed the carved-out steps down toward the beach. The path was surrounded by small rock pools, some filled with fish, trapped for a few hours, until the tide comes back in to help them back out to sea. As September is in the winter time frame, the tidal differences are significant. You can sit on the beach, hundreds of meters from the water line, reading a book – and then a few hours later you can look up and the water will be tickling the bottom of your feet again. The tidal changes give you very different perspectives on the beaches, and let you see very different things at different times. When the water is low, you can walk out over the sand and observe the various forms of marine life in whatever water is left, and then a few hours later, the path on which you walked out, will be a few inches below your feet as your tread water in the new ocean that just moved in. Moving further down the path we came nearer to the end, where the walkway begins to descend below the surface of the water, and as we followed, so did our footsteps. With the tide at its lowest, the dive boat needed to keep its distance from the shallow areas, which meant we had to walk out to it – so we lifted our gear above our heads and headed for the boat. Although there are very few dangers in the shallow waters of Zanzibar, we had to be careful to avoid stepping on the sea urchins that scatter themselves across the reef, and sometimes the sand.

Following the very theme of the island, the dive boat was traditional indeed. The 40ft African vessel was crafted on the island, with wood, rope and a bright orange tarp on top for shade. Although basic, the boat did the job. The ride out was certainly memorable. The winter doesn’t just bring with it significant tidal changes, but also some pretty windy days, and consequently some pretty wavy oceans. The channel near to the shore was calm and flat, as the reef that resided further out, broke the incoming waves and lessened their energy. However that very reef where those high-energy waves were breaking, was our only way out into the open ocean. So the very capable captain and his crew scouted for the perfect point of exit, and so it was found. The boat turned portside and the 150 horsepower engine was put to use. As we held on to the boat, as well as our gear, the captain engaged the throttle and we sped out into the waves. 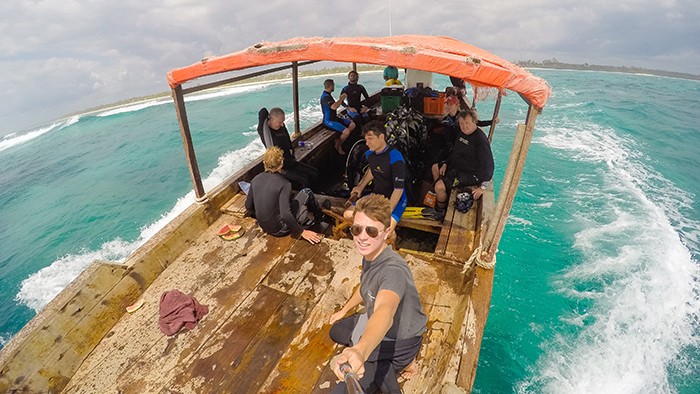 The sturdy boat kept its composure as we headed out into our first wave – the wave acted as a ramp and soon the bow was airborne. For those few seconds the front of the boat is in the air and descending, you hold into everything just a little bit tighter as you brace for the impact of hitting the surface once again. The boat hits the water, seawater sprays over the bow and we wait for the next wave. A few more like this and we’re through the breaking waves and out into the open ocean. But just because the waves aren’t breaking, that doesn’t mean the boat isn’t going to be rocking and splashing. The waves in the open ocean are just as big and toss the boat around just as much. As the boat fights through these waves so we can reach our destination, there’s a group of aquatic animals that are rather enjoying the excitement of the waves. On the starboard side of the boat, between us and the land, a small pod of dolphins swam amongst the waves. First the dolphins simply breached the water only slightly, exposing only their back and dorsal fin. But soon, perhaps as their confidence grew, or because they realised they had an audience, the dolphins began to lift their entire bodies out of the water, jumping over the waves as if they were hurdles. 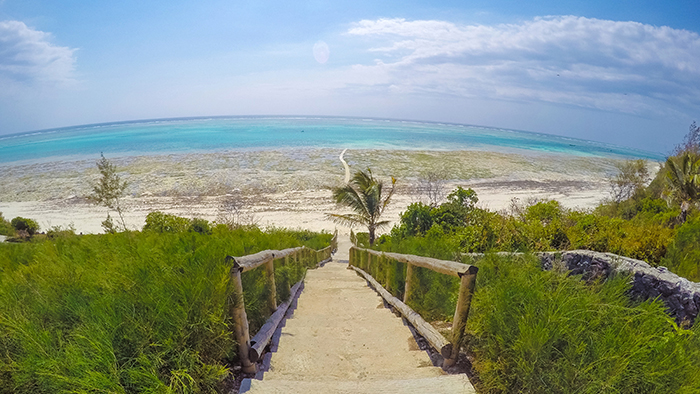 The show was incredible. But as we moved further toward our destination, we moved further away form the spontaneous animal performance. After a quick 10-minute ride, we reached the dive site. As we gear up, it’s made clear that the Tanzanian courtesy and politeness extends to the ocean as well, with the crew quick to help as we struggle to equip ourselves with gear as the boat rocks us around. After a quick briefing and safety check, we head overboard and hit the water. As soon as we descend below the surface, all the waves, all the rocking and all the splashing instantly disappear – it’s suddenly calm as can be. That’s the magic of diving.

Being further out from the shore, the water was deep and there were few other boats around – which meant there was no anchor line to allow for a controlled descent, meaning there was no rope for us to hold as we made our way to the bottom. This meant a free descent was in order. It’s a very strange, sometimes frightening feeling, descending into pure blue water, when you can’t see the bottom yet, and the surface is getting further and further away. It’s not uncommon for people to experience vertigo in situations like these – when you can’t figure out which way is left or right, or even up or down. The solution to such a problem is simply to watch your bubbles as you breath out, which will clearly indicate which way, is up. As the descent continues, the colours on the reef below soon become visible, providing both a feeling of excitement, and relief. Getting closer and closer, the colours on the reef get brighter and brighter. The reef was large, covering a huge expanse of the ocean floor, and therefore providing residence to thousands of fish. Scattered across the reef was everything from eels to octopi, above – huge schools of fish surrounded our group, and disappeared just as suddenly as they arrived. The current in the water began to slowly pick up, carrying us with it. This wasn’t, however, a problem, as the gentle current carried us over the reef, saving us the effort of kicking! As we hovered, we were carried further across the reef, observing everything as we passed – it was a truly relaxing dive. But as always, all good things must come to an end, and so we begun our ascent and made our way back to the boat. 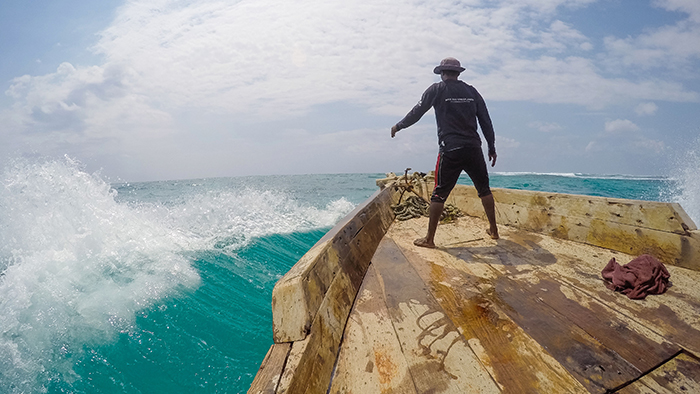 The journey back into the shore was just as exciting as the way out. Instead of speeding into the waves, on the way back in, we had to glide with the waves, alongside them as they broke. As we moved through the breaking waves, the boat began to tilt forward, and the stern (back of the boat) began to rise. Upon looking back, we could see a wall of water that had raised the back of the boat and in fact reached a greater height than our boat did, so water began to flow into the boat. Just as the stern rose, the bow dipped. The very front of the boat began to nose dive below the fast moving water and thin walls of seawater began to rise along the front of the boat, spraying outward. But then the boat levelled out – the stern back down and the bow out of the water – and as we matched the speed of the wave, the engine became obsolete and we began to ride the wave into shore. It was incredible.

Tall palm trees, dolphins, and surfing with a 40ft dive boat – what else can you ask for in a vacation? There are very few islands around the world that will offer experiences as unique and exciting as these. There are very few islands that offer you both a rich culture and an extensive history. And there are even fewer islands that will offer you white sandy beaches, met with lines of tall palm trees that hundreds of monkeys call home. Zanzibar: it’s Africa’s secret getaway, and it’s waiting for you.