Sharks of the Middle East

For 400 million years, sharks have called this planet their home. Throughout this time they’ve scoured the oceans and maintained their position of power as the top predators of the seas. With over 440 different species of sharks, they vary in shape, size, behaviour and location; and with their vast spread over multiple different habitats, some of them have landed here, in the UAE.

Its no surprise that many different types of sharks call the UAE home, at least for a few months of the year, as the UAE and its neighbouring countries are blessed with a rich and vibrant level of biodiversity. And as with any healthy ecosystem, sharks are there to maintain it. Although the UAE  in particular wouldn’t be considered a hospitable place for sharks, in reality, it’s quite the contrary. Though the vast majority of sharks inhabit either offshore or deep water, there are also species that occasionally venture in a little closer to shore. This was evidenced through the spotting of a large whale shark that had wandered into the Marina earlier this year (which residents claim is almost an annual occurrence), or the two hammerheads spotted off JBR, close to the Palm, back in 2011. It’s certainly clear that sharks are living among us here in Dubai and in the UAE, but exactly which species of sharks are the most common? 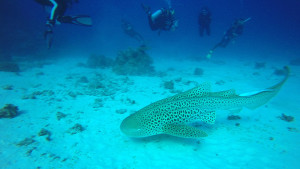 Common species in the UAE
One of the most common species of sharks that lives in the Gulf is the White Tip Reef Shark. The White Tips are generally small, growing only to a maximum of 2.5 meters with a slim and streamlined body shape. These smaller variations of sharks frequent the Indo-Pacific area, putting them right in the trajectory of the UAE. The waters in the gulf are perfect for these small sharks, as they prefer warm and shallow seas – typically between 8 and 40 meters deep. Like many species, the White Tips are a social species so they’ll often be seen in groups, lying on the sandy bottom, or under crevices and in caves. I have encountered these sharks on a number of different occasions, and most of the time they’re laying on the ground under a small cave refusing to come out, making taking their picture a very difficult task! With their calm and docile nature, these sharks pose very little threat to people and are certainly not something to be feared.

Black Tip Reef Sharks are very similar to White Tips, both in their size and their behaviour. Black tips can reach a length of 2.9 meters and interact well with people. Divers all over the world encounter these sharks often and have no problems swimming alongside them. They are however quite shy, and will avoid people if they can. Their habitats are very similar to White Tips, preferring both shallow and warm waters and mainly inhabiting coral reefs.
Another very common species is the Zebra Shark. The appearance of this shark is one of the most distinctive throughout the whole shark family tree. When they are young, they will have light-coloured stripes wrapped around their bodies all the way down to the tail, and then as they get older these stripes progress into spots, mimicking a leopard – and so with that, they’re hard to miss. Similar to White Tips, the Zebra Shark frequents the Indo-Pacific area. Their size however differs, as the Zebra Sharks can reach lengths up to 3.5 meters and generally have a much wider girth. Unlike White Tips, Zebra sharks are bottom feeders, also known as ‘carpet-fish’, and so most of their diet encompasses what lies on the seabed, including things like small fish and crabs. With those behaviours and dietary requirements, the Zebra Shark poses an even lesser threat to humans than White Tips. My first encounter with one of these was in Oman, where we found one laying still on the sand behind a rock wall.He was perfectly happy for a few of us divers to get quite close and take in his spectacular coat, as well as snap a few pictures of him. In fact, he remained so still that he only moved after my dive buddy proceeded to tickle his tail (I wouldn’t advise touching a shark in any situation), after which point the shark decided he wanted to search for a more quite place to sleep, and off he swam.

Progressing a little (or more aptly, a lot) in size, a list of sharks that inhabit the Gulf wouldn’t be complete without mentioning the famous gentle giants: the Whale Sharks. These could possibly be one of the most frequently sighted sharks in the area (it makes it easier when they’re so very large); with divers, swimmers and, strangely, pedestrians and residents in the Marina reporting sightings every year. The largest recorded Whale Shark reached an unprecedented length of 12 meters, which is roughly the same length as a London double-decker bus. Moreover, these goliaths can reach weights of 20 tonnes – which is almost the same as two double-decker buses! It’s these dimensions that have earned this giant the title of ‘the largest fish in the sea’. Despite their size however, they pose almost no threat to people, as they are filter feeders, and feed only on the very small invertebrates suspended in water, like plankton. My first experience with one of these creatures was in Oman, at the end of a dive, very close to the surface. The huge shark circled us and enjoyed the feeling of the bubbles we were expelling tickling his belly. As these sharks often do frequent the surface, they’re easy to spot, so next time you’re out on the water, keep your eyes open! 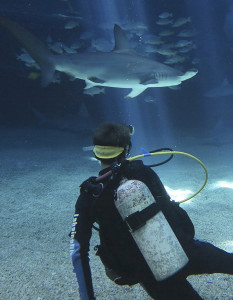 Something to fear?
There are many other species of sharks that live in the Gulf and possibly even in the waters surrounding the UAE. Over the years people have spotted species such as Tiger Sharks, Hammerheads and Mako Sharks. These species have been known to be more aggressive and therefore dangerous, but more often than not this is only a result of being provoked. Species like these frequent waters further offshore and much deeper, so encounters with people arerarer. Most of the aggressive interactions that take place between sharks and people here in the UAE occur only with fishermen who accidently catch these sharks through by-catch. In fact, in 2014 the International Shark Attack File found that in the entire history of the UAE, there have been only 2 shark attacks. This, in comparison with Australia’s number of 572, is a good record.

Fears about sharks are often misguided, as sharks are far less dangerous than movies like Steven Spielberg’s 1975 classic ‘Jaws’ depict. A shark’s instinct when discovering that humans are near is to turn the other way – because more often than not, the average sized person will be much bigger in size than most sharks, and so they won’t want to face off with anything bigger than them. Even the larger variations will do their best to avoid us because we simply aren’t a part of their food chain. It may be a hard concept to grasp, but sharks really don’t see us as an item on their menu, and so they present very little danger. This has been proven to me time and time again whilst swimming with them. I’ve had the opportunity to swim alongside some of the world’s most ‘dangerous’ sharks, like Tiger Sharks and Hammerheads – and as I swim beside them, or as they swim above me, or around me, I seldom experience fear, as I don’t feel like I’m in any danger. Instead, I feel quite certain that these sharks aren’t even interested in my presence at all. In a similar situation, whilst diving in the Maldives, me and three other divers had just descended quite deep, to roughly 35m, when suddenly a grey reef shark swam out from below us. Admittedly it was quite a shock, but then as we turned around it seemed the Grey Reef wasn’t alone, but rather part of a cluster of about 30 different sharks made up of Grey Reefs, White Tips and Black Tips. Even as these sharks began to form a wide circle around us, I still did not feel threatened. It is through experiences like this that I have been made aware of the symbiotic relationship that is possible between sharks and humans. We have very little fear of them, but it is them rather, who have much to fear of us.

Unfortunately, 100 million sharks are killed every year, either through bycatch, illegal fishing, or to harvest their fins and oils for shark fin soup. In comparison, sharks kill 12 people per year – which is almost always cases of mistaken identity when the shark has mistaken a person for its real prey, due to things like cloudy water or rough seas. So if the ratio is so heavily in our favour, who do we still carry such fears? The only sensible fear that we should experience is the fear that shark populations may decline to a rate that will cause irreversible damage to the ecosystem. The presence of sharks in an ecosystem indicate that that ecosystem is healthy; which shows the coral reefs surrounding the UAE and further spread out over the Gulf aren’t doing too bad, as the shark populations are stable. Sharks play a crucial role in maintaining the health of a habitat by ‘cleaningup’ the reefs and preying on the sick and weak fish populations, keeping coral reefs free of disease and strengthening the gene pool of the rest of the populations. This keeps the fish healthy and strong, which in the long term will benefit us. As well, by regulating the fish populations through preying on them, sharks keep the food chain in place and prevent certain species growing out of proportion and causing damage to the environment themselves.

The integral role that these sharks play however is threatened, as are their populations. There are sadly many species of shark in different parts of the world that are currently vulnerable to extinction. Before the Gulf is overfished and the shark populations greatly threatened, our ecosystems and our neighbour’s ecosystems can be spared. This requires the help of people like you: avoid buying any products with elements of shark in them, eat only the fish that have been dubbed as ‘green’ or sustainable to eat by organisations like the WWF, and spread awareness of the importance of sharks and the need for conservation. And if you feel as though you want to experience what it’s like to swim alongside them, to understand the harmony in which we can both live, and to truly experience the absence of the fear that you thought you would feel – get out there, start diving, and keep your eyes peeled!