Wildcard Rhiannan Iffland provided the perfect ending to a dream debut season with her fifth success in seven competitions, wrapping up the Red Bull Cliff Diving Women’s World Series title in style under the lights in Dubai Marina, while Andy Jones soared to his first ever victory in front of a 12,000 strong crowd at the sport’s inaugural night event. 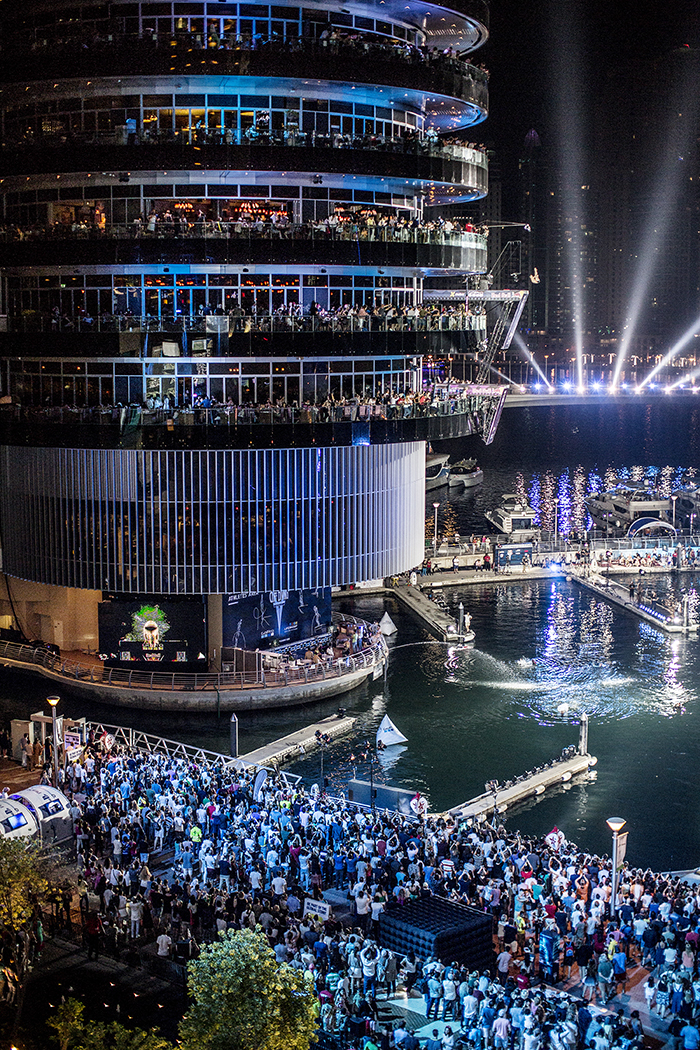 Steven LoBue of the USA dives from the 27 metre platform on the Dubai Marina Pier 7 building during the ninth and final stop of the Red Bull Cliff Diving World Series in Dubai, UAE on October 28, 2016.

Iffland was joined on the podium by fellow Australian Helena Merten, with Adriana Jimenez from Mexico rounding out the top three. Britain’s Gary Hunt celebrated his recent title win with a second-place finish, and Mexico’s Jonathan Paredes completed the men’s podium on a memorable and dramatic final night in the UAE.

Coming to Dubai, 25-year-old Iffland from Down Under was one dive short of the overall victory but still had the ambition to make it count and finished the 2016 season in style. Five victories plus two podium finishes made her the undisputed dominator in the women’s World Series. The Australians had a strong showing in the year’s final event with Merten, the youngest permanent athlete in the field, finishing on a personal best second place. Jimenez on third also saved her best result of the year for the floodlit final in the illustrious Dubai Marina.

In Friday’s floodlit 2016 showdown, California-based Jones utilised his Cirque du Soleil background in the World Series’ first-ever night time event to show his best diving and topped his most successful season with a first place from the 27m-platform, forcing 6-time overall champion Hunt into 2nd place. Paredes, the season’s kick-off winner, finished the year on a high note completing the podium. 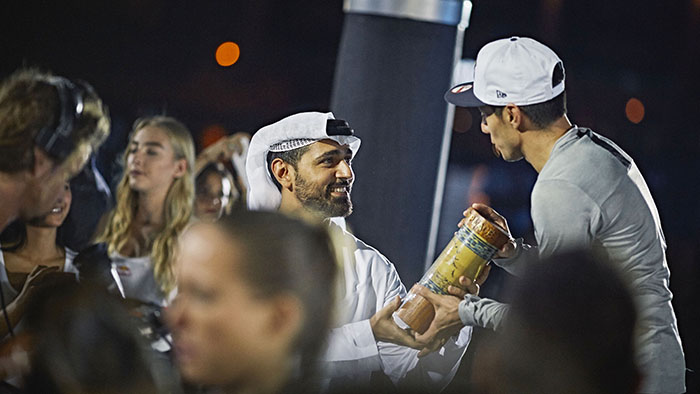 Dubai Tourism CEO H.E. Issam Kazim presents the trophy to Jonatan Paredes of Mexico during the awards ceremony of the ninth and final stop of the Red Bull Cliff Diving World Series in Dubai, UAE on October 28, 2016.

Looking at the overall results, ‘brilliant Brit’ Hunt wrapped up his second hat-trick of World Series wins after dominating 2010-2012 and 2014-2016. With the world’s hardest dive on his list, three victories and four more podium finishes, the 32-year-old left once again his mark on this sport. Mexican rising star Paredes, who’s famous for immaculately displaying the easiest dives from almost three times the Olympic platform height, bettered his top-three finish from 2015 by one position to become 2016’s runner-up. Today’s competition winner Jones claimed third place overall, beating Czech’s Michal Navratil on fourth by a small margin. Fellow-American Steven LoBue completes the top four of the 2016 World Series. 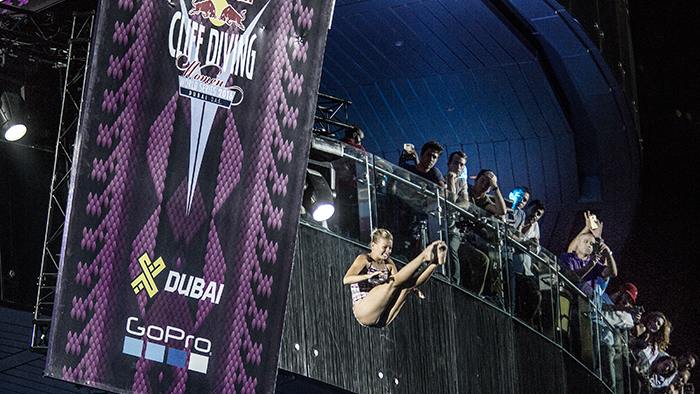 Rhiannan Iffland of Australia dives from the 20.5 metre platform on the Dubai Marina Pier 7 building during the ninth and final stop of the Red Bull Cliff Diving World Series in Dubai, UAE on October 28, 2016.

Over in the women’s, only Canada’s Richard managed to stay on Iffland’s heels in the overalls and with two season victories, she finished 2nd in what was her first fully-fledged season from 20m. Cesilie Carlton from the US and Australian Merten complete the top four, and automatically qualify for the 2017 season.

In addition to the top five of the 2016 World Series ranking, the remaining five permanent tickets for the 2017 season were assigned according to the rankings after 11 events, including the FINA world cup and Marmeeting: David Colturi (USA), Orlando Duque (COL), Sergio Guzman (MEX), Blake Aldridge (GBR) and Kris Kolanus (POL).

In the female’s, Mexico’s Adriana Jimenez and Ginger Leigh Huber from the US got awarded a permanent ticket for the 4th year of the Women’s World Series.

Nine tough and testing competitions, including seven for the women, between June and October made for the biggest-ever Red Bull Cliff Diving World Series in 2016, in which this pure extreme sport touched waters in natural and urban surroundings as well as remote and iconic venues. In its eighth year this gravity-defying sports series hit new and proven ground in North America, Europe, Asia and the Middle East to crown two new champions. 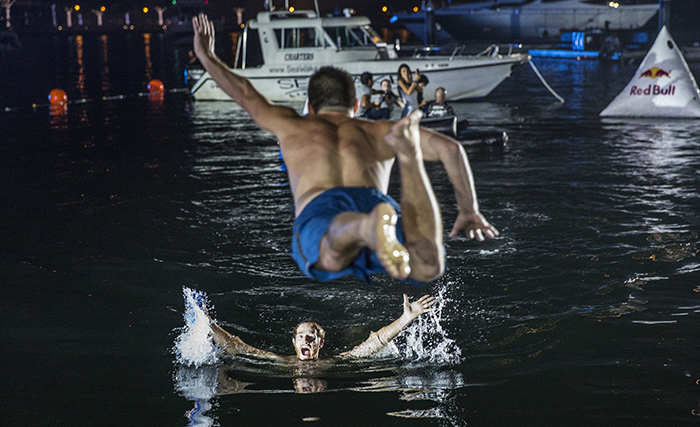 In 2016 the World Series has seen more competition winners than ever before – six winners in nine events, including two new faces on the top with veteran Michal Navratil (CZE) and World Series rookie Sergio Guzman, in the men’s and a complete newcomer who’s taken the female cliff diving elite by surprise to become the first-ever rookie to win the overall championship.

The World Series, with its ever growing complexity of dives pushing the limits of what is physically possible, as well as the lengthening list of winners and increasing competition at the top, will return stronger than ever in 2017.

What did the winners have to say?
Rhiannan Iffland, AUS
I feel over the moon right now. It’s still sinking in. But I wanted to come here today and do my final dive. I wanted to make it really count and put a strong one in. So I’m very, very happy. I think finding out about the title yesterday made it easier, had I a little bit of less stress on my shoulders. All I wanted to do today was got out there and have a good time.

Andy Jones, USA
I wasn’t thinking so much about the darkness as a lot of the other guys. I think my background was definitely an advantage. I did a whole bunch of high dives in the dark in my career before here. I think it definitely helped me out and I managed to win the first round and hold it the whole way. It was a crazy couple of days. I was thinking about it all day today, all day yesterday and I knew if I do my best then it can happen and I did my absolute best diving. I have my best score ever and I got my first win.

Gary Hunt, GBR
I feel great. It’s a defeat in the end of the day but it’s a full stop on a very long season. A season where I can take a lot of positives away from. There’s nothing relaxing when you’re up on that platform. It’s a thrill ride every time and that said, I felt comfortable and more and more comfortable especially with the title in bag but the edge wasn’t there today. 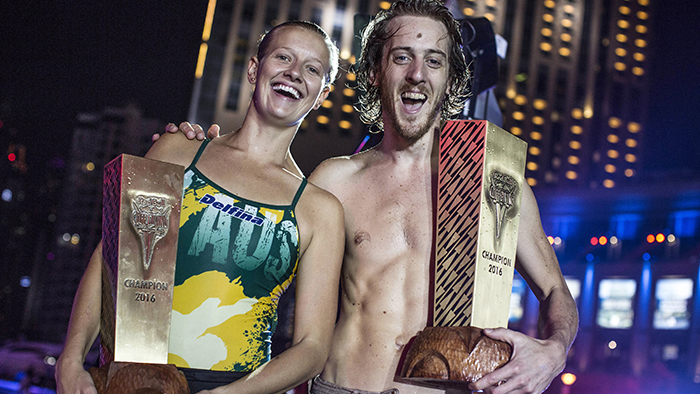 Red Bull Cliff Diving World Series
Since 2009, the Red Bull Cliff Diving World Series has provided a platform for exhilarating action and dives of ever-growing complexity. The series features elite athletes as well as young up-and-coming talent and a Women’s World Series was introduced in 2014. In 2016 the sport’s best athletes will once again leap, twist and somersault from breathtaking heights with no protection, except their concentration, skill and physical control during nine competitions around the world.