Dubai residents are in for a treat on 28th October, as the famous Red Bull Cliff Diving World Series stages its first competition in the UAE, with the iconic Dubai Marina as its backdrop. Taking place at Pier 7, international competitors from countries such as Britain, Mexico, Columbia, USA and Russia will wow the crowds with their skills, judgement and bravery. Moreover, the Dubai event will be the final competition in the series, meaning that the champions will be decided here in the UAE! 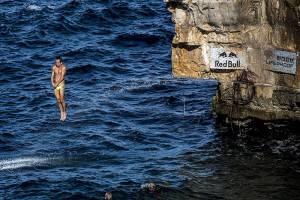 What is Cliff Diving?
Reaching speeds of up to 85km per hour and experiencing up to 5G’s of physical force in a three second dive, cliff diving is certainly not for the faint hearted! Whilst Olympic diving generally takes place from a 10 metre platform, the Red Bull Cliff Diving series sees women diving from 19.5 -21.5 metre platforms and men attempting dives from 26.5 – 28 metres. Jumping from these great heights means that the impact can be up to nine times greater than diving from a 10 metre platform. Platforms are stable and are a minimum of 1.5 metres in length, with a width of 75cm. The water has to be at least five metres deep, and even then there are rescue scuba divers and paramedics on standby, just in case of any incidents.

What are the risks?
Without a doubt, the highest risk of injury occurs during the landing phase, when parts of the body are already exposed to absolute deceleration (slowing down) and others, above the surface, are still at full speed. Immediately after hitting the water, the athlete has to actively dive away to avoid compression or contortion of other parts of his or her body due to the hardness of the water; landing incorrectly from such heights can be compared to running at full speed into a concrete wall! Diving from heights over 28 metres does not really deliver any time benefits due to the increased acceleration and accompanying disproportionate risk of injury. 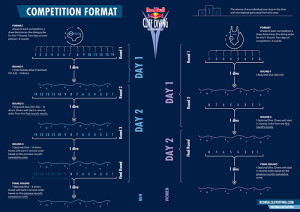 The winner will be the athlete with the highest total number of points from all four competition dives.

The women’s competition generally follows the same format, featuring three rounds over the two days. Round one is again the required dive with a maximum difficulty of 2.6, with round two and the final round both being optional dives.

Steven Lobue of the USA dives from the 28 metre platform during the fourth stop of the Red Bull Cliff Diving World Series, Kragero, Norway on July 12th 2014. // Romina Amato/Red Bull Cliff Diving // P-20140712-00210 // Usage for editorial use only // Please go to www.redbullcontentpool.com for further information. //

Rules, scoring and World Series ranking
If you’re heading to the event, it might be helpful to know just how it is scored, and how this links to the World Series.

The winner of each individual tour stop (other locations include Denmark, the US, Portugal, France, Wales, Italy, Japan and Bosnia and Herzegovina) is the diver with the highest points total from all four competition dives (three for women). The ranked athletes from each tour stop are also awarded points which are then tallied to produce the World Series ranking. In each event the points awarded are as follows:

The eventual winner of the Red Bull Cliff Diving World Series 2016 will be the athlete with the highest overall points after nine competitions, or seven competitions for the female divers.
The Red Bull World Series Cliff Diving Event takes place at Pier 7, Dubai Marina, on 28th October from 8pm. For more details, visit www.redbullcliffdiving.com/en_US/event/dubai-2016