There is no limit to where you can go with a fat bike, the only limit is your imagination… it’s a fun activity for any level of cyclist. There are many ways to get into fat biking; obviously, you can buy your own fat bike and just start exploring, or places like The Cycle Hub will rent you a bike for the day so that you can give it a try first. These bikes may be slower but they really are enormous fun. 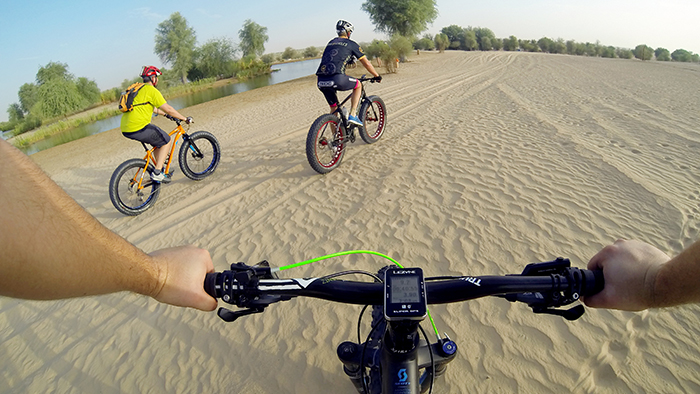 Riding around the lakes at Al Qudra nature reserve

As Dubai and most places in the UAE are mainly sand, this is an ideal place to experiment and explore on a fat bike. A popular place to ride around are the sand dunes in the middle of the Al Qudra Cycle track. People ride around there exploring the nature reserve lakes and other lakes within the sand dunes. Other great places include Liwa, Fossil Rock, Sweihan and popular mountain bike trails such as Hatta. A friend rode a distance of 180km solo over three days, crossing the Wahiba Sands by fat bike, so there really is no limit to what you can achieve. Some people have even raced 6 hour endurance events at Hatta, and they can also be used for different riding styles, which shows you how versatile they are. 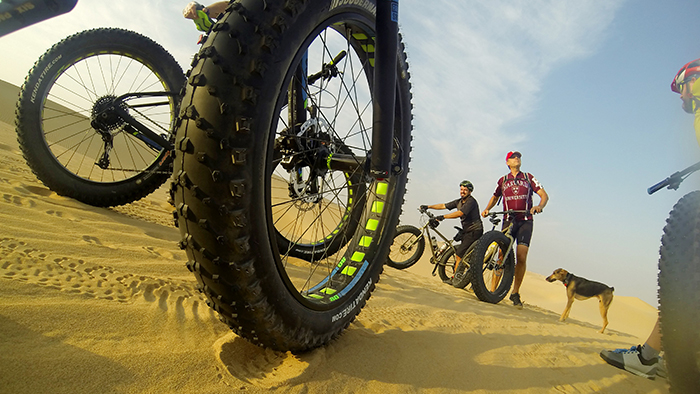 Morning fat bike social ride and a run for the dogs

Riding fat bikes can take a little time to get used to compared with riding a conventional mountain bike.The handling of a fat bike on sand is obviously different to on gravel and the soft areas of sand and the contours of dunes makes the bike move around underneath you a lot. This is all part of the fun! You will get soft areas of sand where you will feel that you’re coming to a stop, but if you keep pedalling the majority of the time you’ll get through it. Other things to get used to is riding with the correct tyre pressure to suit you when on sand, as pressures vary depending on the rider’s weight – roughly 4-6psi is normally used.If the tyre pressure is too hard your tyres will sink into the sand and you’ll get stuck as the ‘footprint’ will be too small. The lower pressure allows the footprint to be wider, allowing the bike to float over the sand. Sometimes getting this wrong puts people off riding in the dunes, as they think it’s too much hard work and not fun at all. It takes a few goes at experimenting in the sand dunes to get the pressures correct by trial and error and finding out what the bike is capable of.Going tubeless, which means removing the inner tube, is something else to consider.This saves weight and also the hassle of changing tubes in the desert heat. 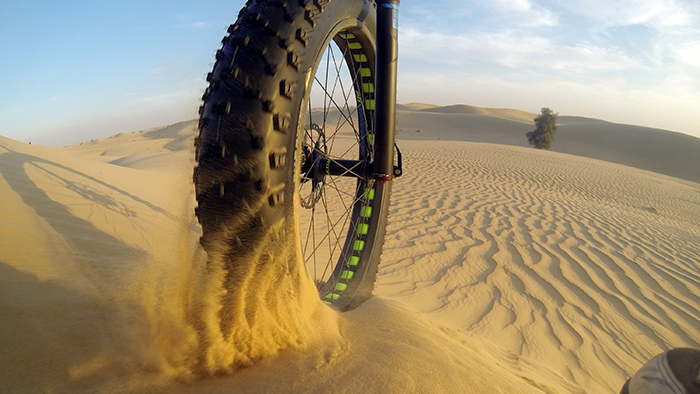 Soft sand can catch you out but just roll through it

Getting to the top of the dune will be easy for some as they pick out the correct line to get there. Don’t just aim for the highest point of the dune, you need to make the dune as flat as possible. So riding around the lower points of the dune to eventually hit the ridge will get you to the top of the dune. Once you’re up there the really fun part is riding down the dune, as all that hard work for a few seconds of fun is really worth it. When riding down the dune keep your bike as straight as possible and don’t press the front brake. There have been some occasions on big dunes where riders have hit 50kmh going down and then roughly 2 G’s of force when they hit the transition to flat at the bottom. 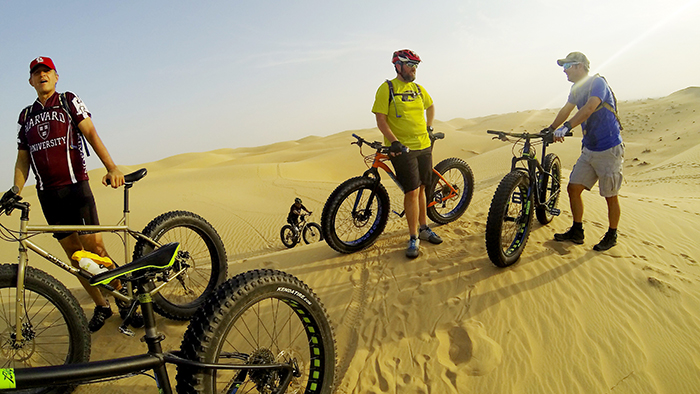 Some important points to remember when riding in the desert:

• Don’t ride alone, always ride in a group and stay close. Mainly in case of a mechanical issue or a fall.
• Have the contact numbers of the people you’re riding with just in case you do get split up.
• Wear a helmet… yes the sand is soft but sand stone isn’t.
• Take plenty of water, especially during the summer. You’ll be surprised how much you will go through in an hour.
• Make sure your mobile phone is fully charged before you go out. Not only might you need it to contact someone, but most smart phones will have access to maps in the case you feel you are lost.
• Ride with a GPS unit so that you can track back on the route you’ve ridden. You can follow your tracks back but there may be other fat bike tracks that aren’t yours and your tracks may have been covered up.
• Keep track of the land marks that you can see to help you navigate if your GPS battery runs out.
• Plan a route beforehand so you know roughly how long it will take and where you are likely to go.
• Take some spares and tubes. Tyres can get punctures in the desert when near vegetation so having a spare tube and tyre levers is a must, and obviously a pump or some Co2 canisters (not to be used with tubeless tires as it freezes the sealant). Tools such as a chain breaker and hex keys are a good thing to have.
• Listen out for other desert users such as 4×4’s. Ride away from any tracks and look and listen out when you hit the top of the dune ridge.
• The Dubai Police app is a useful one to have on your phone. If you’re lost in the desert you can press the SOS button in the app and you can then be located and picked up.

If you want to ride with other people who enjoy fat biking and gain some or more experience riding in the dunes,then follow the Facebook group called Fat Bikes Dubai – DXB. They do weekly social rides and also plan some longer rides come winter that require a good level of fitness. Also, there are conversations and information sharing on most of the points made in this article. One ride that has recently happened is a night ride in the desert under a full moon. The group’s page has a lot of information and a lot of the members are keen road cyclists as well, which shows
that the interest for these bikes is not limited to mountain bikers.