Cave Diving in the Middle East

Over thousands of years and thousands of swells, waves smashed against coastal rock faces, eroding and collapsing the walls, creating underwater spectacles – huge displays of sunken rock and eroded walls, allowing for an underwater playground for scuba divers, to emerge.

Cave diving is one of the most unique and exciting forms of Scuba diving, and requires a certain sense of adventure and bravery to embark upon, not to mention a special set of skills. Diving in an overhead environment is vastly different to any typical dive, as it brings with it a special type of fear: the fear that you won’t be able to find your way back to the surface. However this fear quickly subsides as you enter these caves, and the feeling of wonder and admiration swiftly takes its place. When done properly, cave diving can be a wonderful experience in an environment that few people get to see, an experience that you will never forget, and will have you coming back for more. These caves provide views of geological wonders and beautiful formations that divers cannot see or enjoy elsewhere. As well, the atmosphere within these caves is considerably different to that of the atmosphere in the open ocean, as there is no current, no waves and no sound, not the crackling of coral or the grumble of a boat’s engine, it’s just the sound of the breaths you take in, and the bubbles you expel. It is truly awe-inspiring. 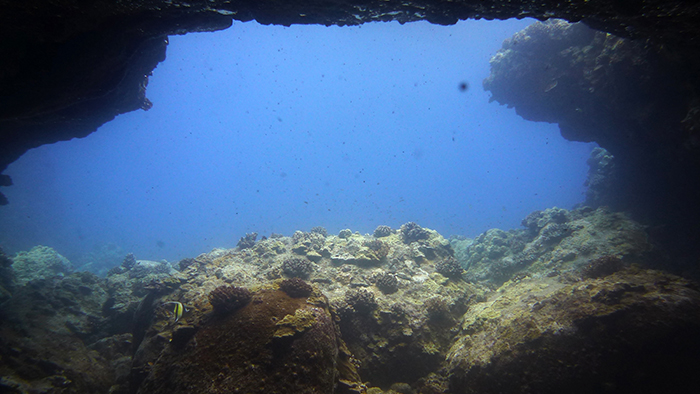 Cave diving equipment can be very different to the equipment taken on a normal dive, as the environment is considerably different, so is the equipment required to experience it. Along with normal scuba equipment; cave divers use a primary light, as well as a backup, a line and reel, special exposure protection gear and a number of other pieces of technical diving equipment.

Luckily, as much of the Middle East is attached to the ocean, the region boasts wonderful cave diving sites, that can satisfy the needs of all divers. A great deal of the coastline along the UAE and Oman specifically, has the ocean being met with mountains and cliff faces, predominantly in areas like Dibba, Musandam, Fujairah and Muscat (which are already diving hotspots), this means that there is ample opportunity for caves to form in these areas, providing the perfect sites for cave diving. One of the greatest sites in the area is a dive site appropriately named ‘The Caves”, off the coast of Dibba, roughly an hour and a half from Dibba Port by boat. 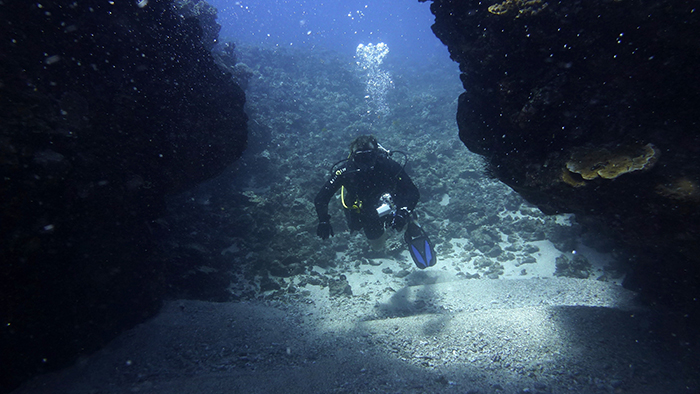 This fascinating site offers a modest yet remarkable cave that is perfect for a first experience and a fun adventure. The site encompasses many of the great aspects of diving: good visibility, ample sea life and calm waters, and combines them with the exciting aspects of cave diving: darkness, intrigue and amazing landscapes. One of the greatest things about this particular site is that the caves are not too deep and are not to narrow or constricting (at most points), so it is perfect for someone who has never experienced a cave before, as well as a veteran cave diver looking for a new experience. The first thing that you experience when moving toward the cave is the darkness, the sizable variation in light in comparison to the open ocean you’ve just come from. Moving closer to the entrance, you instinctively and repeatedly blink, as your eyes begin to attempt to adjust to the darkness. Getting closer, you become more adjusted and you begin to focus on the interior aspects of the geological marvel and its inhabitants. Along the walls and across the sea floor, fish and other organisms go about their day in the dark, untroubled by a foreign presence. It’s not uncommon to spot larger forms of sea life in caves such as these, marine species like sharks often favour these dark spaces, particularly the Whitetip reef sharks, who frequently enjoy laying still on the sea floor in caves and under crevices. At the entrance, huge rectangular rocks tower toward the ceiling, leaning against the underwater section of the cliff face, near the entrance of the site, giving the cave a unique exterior design and distinctive layout. Moving past the giant slabs of rock, a passageway through to the main chamber is in the centre. An arch overhangs, extending from the cliff face out toward the ocean where it meets another base of rock. Swimming through into the main chamber, the atmosphere changes, as does the lighting; now that you’re in the heart of the cave, the only sound is that of your breath and everything else is still. A few beams of sunlight shoot through here and there from holes in the ceiling, but apart from that, the cave is flooded with darkness. The little light that those holes provide illuminates just enough of the cave that you can appreciate the size and scope of the chamber. Floating in the centre and looking around, it’s baffling to find that you’re inside a cave of this size, as it is deceptively deceiving from the outside. The inside is almost like an ancient ruin of a church or cathedral, with its high ceiling and archaic décor. Floating in the centre of the cave, it feels as though you’re frozen in time, motionless, with no concern for the outside world. The colours within the chamber are a mixture of black, and blue, with streaks of white glow, adding to the tranquil ambiance of the setting. It is now that you feel the feeling of stability, equilibrium, when gravity has disappeared, time has grounded to a virtual halt and everything is static. You hold your breath for a few seconds, creating a silent serenity that can only be experienced in such a dark, empty hideaway, it is then that you feel peace. 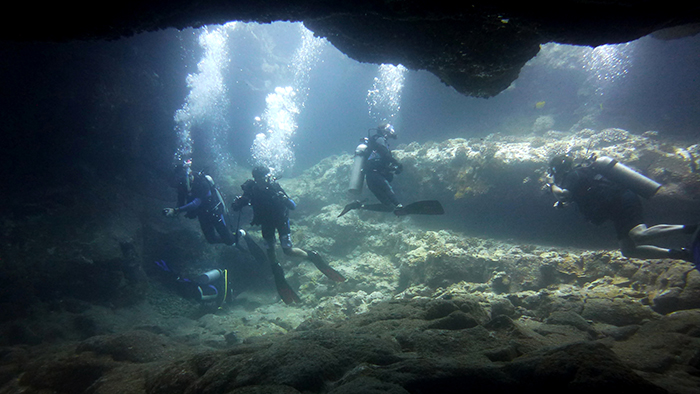 This suspension of time however must come to an end, and like all dives, there comes a time when you must resurface, so the journey back up begins. With the particular setting of this cave, you must swim down before you can swim up and out, as the exit comes after a crevice that hovers just over the seabed. Swimming down toward the gap between the floor and the ceiling, the light from the ocean outside acts as a guiding light, letting you know the direction to take. The last and final passage along the journey is a small one, only about two or two and half meters high, making it one of the more confining alleys inside the cave, but at the end of it is the way out, and with one final swim you’re back on the outside and the cave resumes its conditions of emptiness and silence. 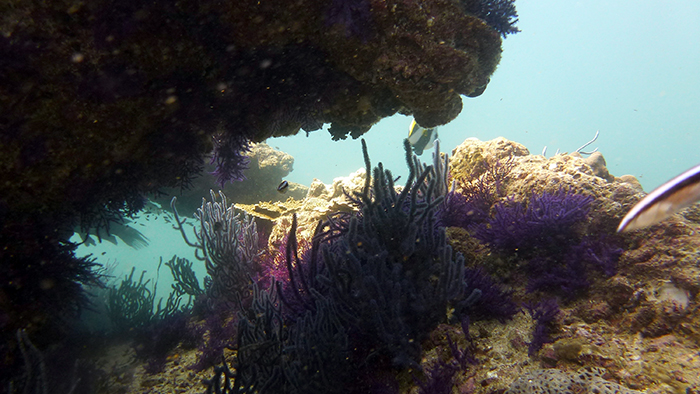 This particular cave in Dibba is not a long, intricate and complicated cavern that requires a special qualification to enter, but instead one that can be enjoyed by all divers, as long as you’re accompanied by a diver who knows the ins and outs of the cave well. In many cave diving locations; there are large dark spaces that look extraordinarily inviting, yet potentially dangerous, so diving in more complicated caverns can be done properly after achieving the PADI Cavern Diver qualification. This is a specialty course that can be completed after reaching the Advanced Open Water qualification, which will teach you how to explore caverns correctly and how to use the appropriate equipment that makes these dives possible.

This particular type of diving brings with it a whole new element of danger, that’s similar to diving inside shipwrecks, in that the exit isn’t always straight up. However, as long as that danger is neutralised by the proper training and equipment, cave diving can simply be a new and exciting experience that’s unique to any other adventure activity out there. Luckily, if this new adventure sounds enticing to you, you won’t need to travel far to get your first experience, as the closest cave is only hours away, and is certainly a perfect example of the experience that activity can offer.