A Tough First Day
I was sobbing like a baby. What on Earth was I doing here? It was dark and I had stopped at the side of the highway between Ibri and Bahla having left Muscat nearly 16 hours before. I was bonking hard and needed to eat real food. The headwind had been relentless since we had made the turn west near Rustaq at around the 75km mark. I was at a low point having just realized that the service station I was looking for was 5km behind me and across a divided highway. The day also had included nearly 2000m of steady climbing with no relief due to the winds. While crying at the roadside, I also seemed to have lost my Rapha sunglasses in the dark and was now searching for them through the tears. I texted my husband, John, who was supporting me virtually from Qatar, “I think we overestimated my abilities.” I vowed to never do something like this again. 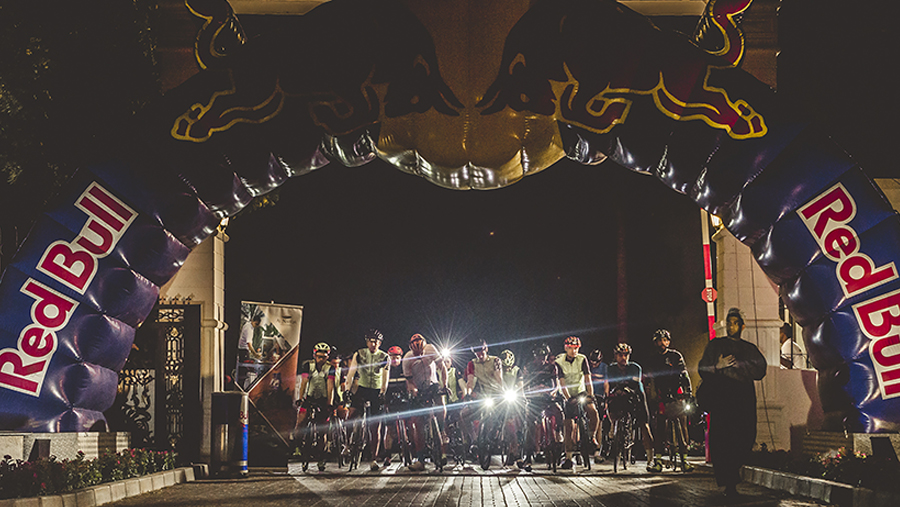 The Night Before
We all sat around the hotel dining room sharing the excited nervousness just hours from our start at 3am the next morning. Out of the 45 starters, 39 of us would make it back to Muscat on our bikes. Across from me sat Perrine Fages, my friend and superwoman triathlete who is currently spending more time training than most of us spend at work in a week in preparation for the gutsy Arch to Arc Enduroman ultra triathlon. To my right, Jason Black introduced himself and proceeded to share his impressive resume of summits (including Everest and K2) while I sat with my mouth agape and my eyes wide.

Just down the table to my left sat Josh Ibbett, winner of the 2015 Transcontinental Bike Race; and Juliana Buhring, one of the strongest ultra-endurance cyclists in the world. It was inspiring to be surrounded by these athletes, and at the same time I wondered what the heck I was doing there. “What have I gotten myself into?” I thought to myself. It wasn’t the first time it had crossed my mind since registering in October 2017. 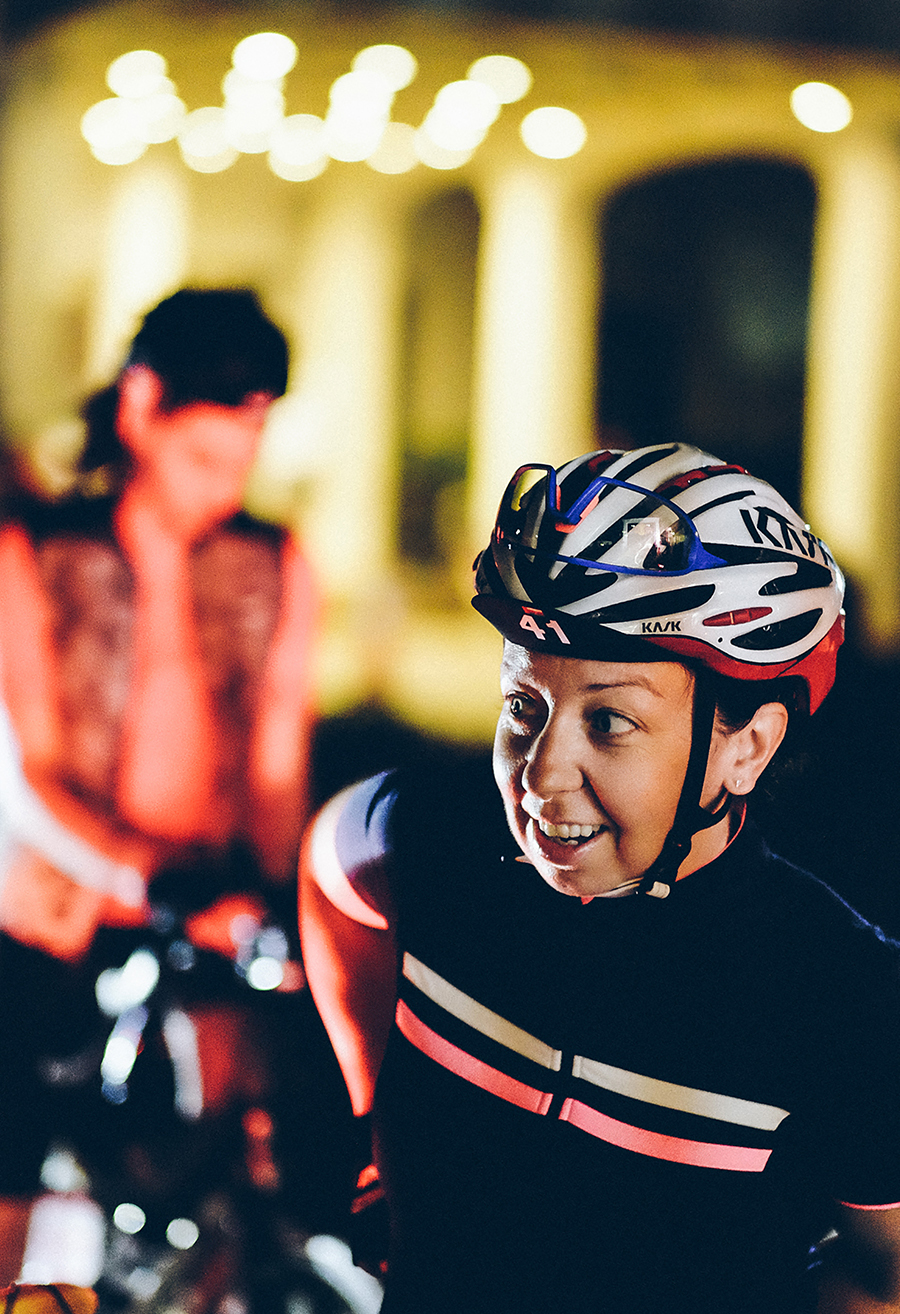 The First BikingMAN
We were making history at this inaugural BikingMAN ultra-endurance event. The first of the series and the first race of its kind in Oman. I had taken exception to the illiberal name of the event well before registering, but knowing nothing changes if you choose not to participate, I decided to sign up if for no other reason than to add another woman to the start list. As one of only seven women participating, my only hope was that I simply survived to finish before the five-day cut-off at 3am on the coming Friday.
But I couldn’t get ahead of myself. The first real challenge would be getting to the checkpoint at the top of the steepest, hardest climb I had ever attempted on a bike by 4pm on the second day. Jebel Shams is a 22km climb with 1500m altitude and includes some inclines over 20 per cent gradient, or as fifth place finisher Niel Cope land described it, “eye-wateringly steep!” 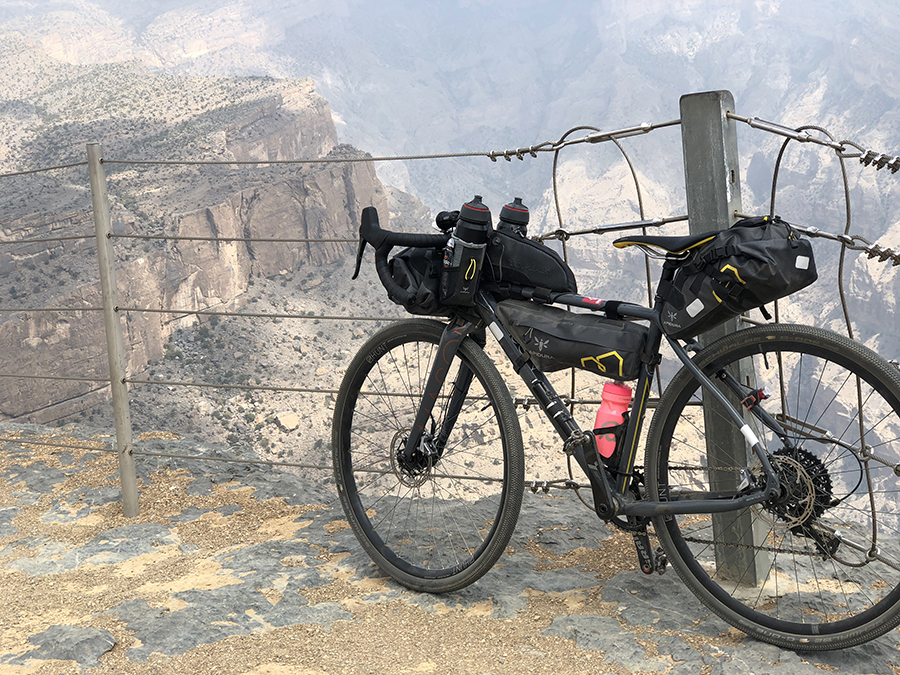 Beyond Challenging
To put this all in context, while I have always loved riding a bike, I had only really started cycling in 2013 after meeting my husband, John, and joining some local races and group rides in Qatar. Previously, I had commuted to work and never even seen a bike race before. Within four years, I had become a familiar face on local podiums in both road and mountain bike races in Qatar, and my biggest event was racing joBerg2c, the challenging 9-day mountain bike stage race in South Africa in April 2017 with John. 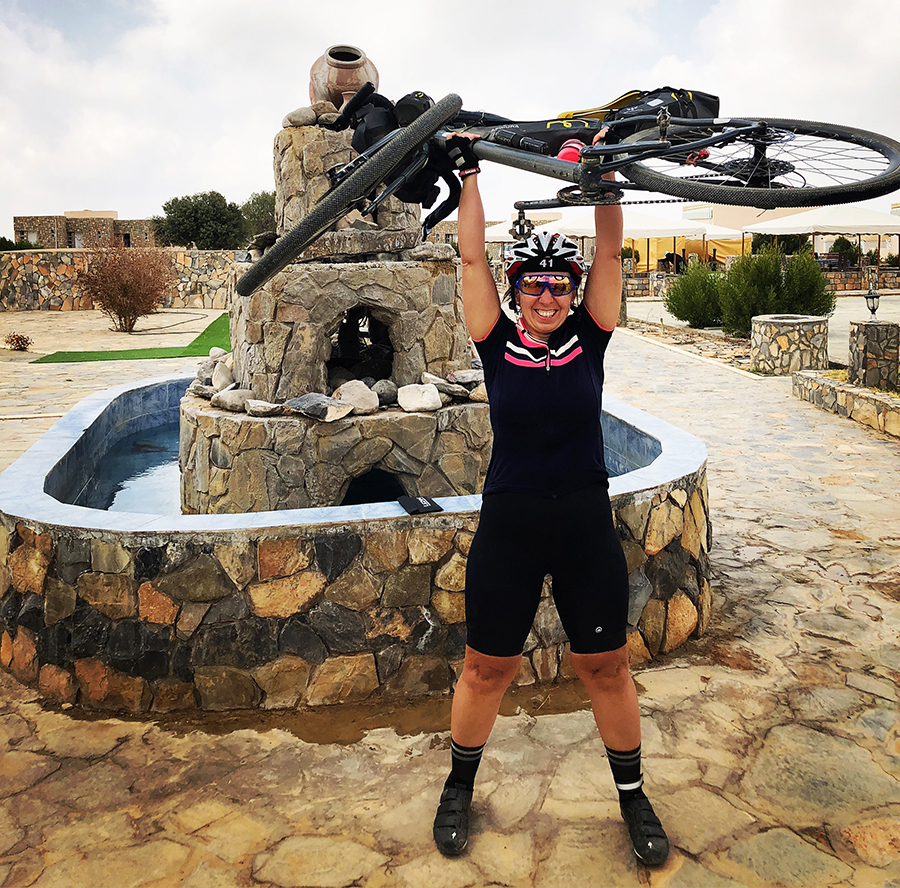 Endurance cycling does not come easily to me, and BikingMAN was more like a curiosity, an odd musing that teased at the corners of my thoughts asking, “I wonder if I could do something like that?” With no real hills to speak of in Qatar, it was also a feat for me to train properly, so my coach, Szymon Wasiak, helped me to prepare with the resources we have. Even with all of my training, though, I knew this would be a crazy challenge for me. And that excited me like nothing before. Perhaps this was going to be “my thing.”

Day One
My first day started out with gusto. I felt good and kept up a surprisingly fast pace for the first few hours as we left Muscat behind in the dark. But when the hurricane-like winds hit, it was like cycling against a wall, and it took a toll on me. I was mentally prepared for the elevation and distance, but I was not prepared for the third element of insane wind at every turn. It was soul-destroying and I honestly thought my dreams of becoming an ultra-endurance cyclist were over.

But by the time I settled into my hotel for the night in Bahla, I was still pretty much on schedule as my coach and I had planned. On the other hand, I had no idea how my body would feel when I awoke, and this is part of the mystery of ultra-endurance cycling. I was shattered, and the monster climb of Jebel Shams was facing me on Day 2.

Day Two
I awoke a few hours before my alarm, but with only three or four hours sleep, I felt surprisingly wired when I jumped out of bed. I had no idea how Jebel Shams would go, and I wanted to give myself the best possible chance of reaching the checkpoint before the cut off at 4pm that day. I started off in the dark, my mood vastly improved from the previous night. I could not wait to see this mountain that everyone had been talking about for months. I was ready for an adventure.

When the incline started, it was gradual but persistent. My mood did not waver – I was like a kid. I felt so lucky to be out there on those hills. Suddenly, the gradient got serious, but I kept my sense of humour. I made sure to stop and take photos, and the mountain goats made me smile as I noticed more and more hopping up onto the stiff branches of the wind-gnarled trees lining the winding roads.

My legs started to resist, and I walked for a bit pushing my bike with my head down and sweat dripping off my nose and onto the tarmac. I remounted and zigzagged my way up, inching slowly. By the time I reached the gravel section, I now knew I would make the summit and likely even ahead of my plan! I cruised around the last bend, standing up and giving a whoop as I entered the gates of the Jebel Shams Resort to get my map stamped by the officials. I couldn’t wait for that descent. I had seen other competitors descending all day and now it was my turn. I let my Mason Bokeh fly over the gravel descent, using my arms and legs for suspension and grinning from ear to ear.

After Jebel Shams, I was fueled by the success of what I had considered the hardest challenge of the whole event. The remaining part of day two for me was just a perfunctory exercise in getting from point A to point B – just past the town of Nizwa. The thought started to creep in, “Maybe I could be good at this ultra-endurance thing!” 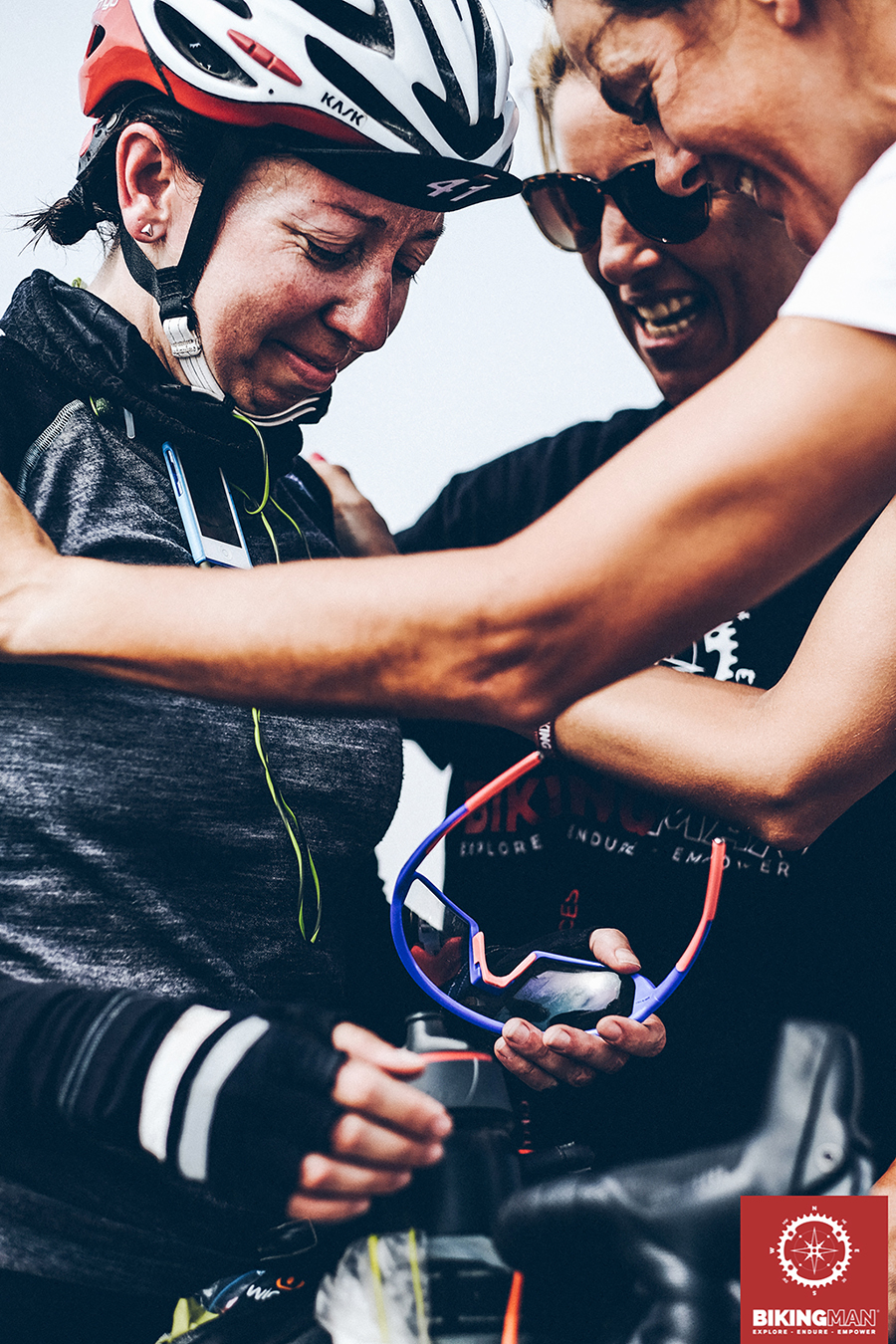 Day Three/Four
While it started out with breathtaking scenery through some mountains, day three posed many unexpected challenges for me, including a never-ending seemingly straight road, endless roadworks, and a truck driver who deliberately tried to run me over after harassing me on the side of the road.

But reaching the next checkpoint was like erasing a dirty chalkboard, and in the middle of the night when I woke around 2am, I was itching to get back on my bike. I donned some fresh kit and headed out into the mist, towards the beautiful Omani coastline and on to the town of Sur. I stopped for a huge lunch, checked into the hotel for a shower and a quick snooze before rising to do it all again one more time. I set off from Sur around 10pm and headed up and up and up the hills towards Muscat through the long night of darkness and donkeys.

As dawn approached, I found a coffee shop, replenished my supplies and headed off towards the final kilometres not yet realizing how tough this final push would be. Chased by vicious dogs, inhaling ship loads of dust, and facing the final steep climbs presented one challenge after another. It’s no wonder I was in tears at the end, but they were tears of joy as well as exhaustion, pain, and relief. 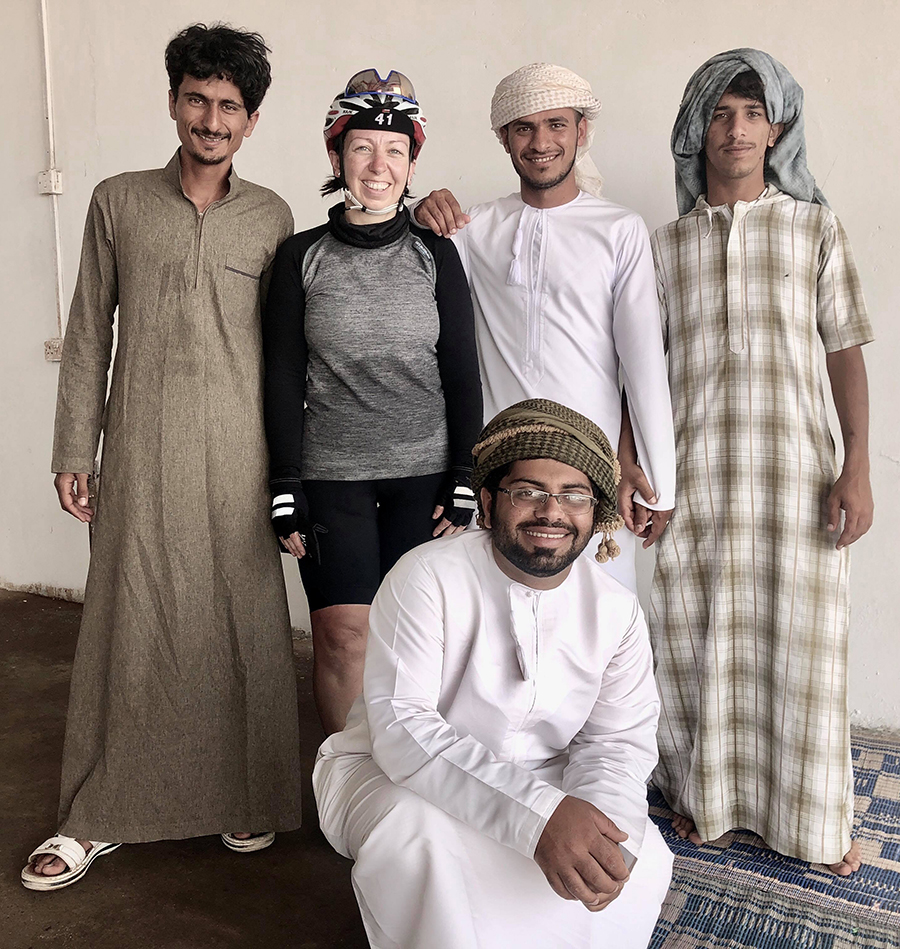 Why Do You Do It?
I kept asking everyone afterwards, “Why do you put yourselves through this?” A lot of people talked about finding joy on the road in the silence or the beauty or the people, and I would have to agree with those things. But for me there were also times when I told myself, “never again.” For example, fighting those winds for 16+ hours on day one or my horrific experiences on day three. But as the days passed, the memories of pain faded and the joy seemed to amplify. I have stayed in touch with many of the other riders, and our brief encounter seems oddly stronger than that of some people I have known for years. We are bonded by our passion for venturing off the beaten path, our thirst for adventure, and perhaps feeling like our unconventionality is welcomed by others who truly get it. And yes, I am now considering where, not whether, my next ultra will be! ■