On the edge of Wadi Ghul, also known as Oman’s grand canyon, in the grandiose Al Hajar mountains, I stand uneasy, defying my fear of heights on a narrow trail alongside a never ending cliff.

This seldom used walkway is the only access to an old hamlet nudged on one of the canyon small terraces, and further along, to the Jabal Shams (The mountain of the sun) summit. Behind me, coming at a far greater speed, an Omani shepherd is leading three loaded donkeys and a few goats, some of them fighting gravity to grab just a few leaves from skinny bushes perched on the rocks. 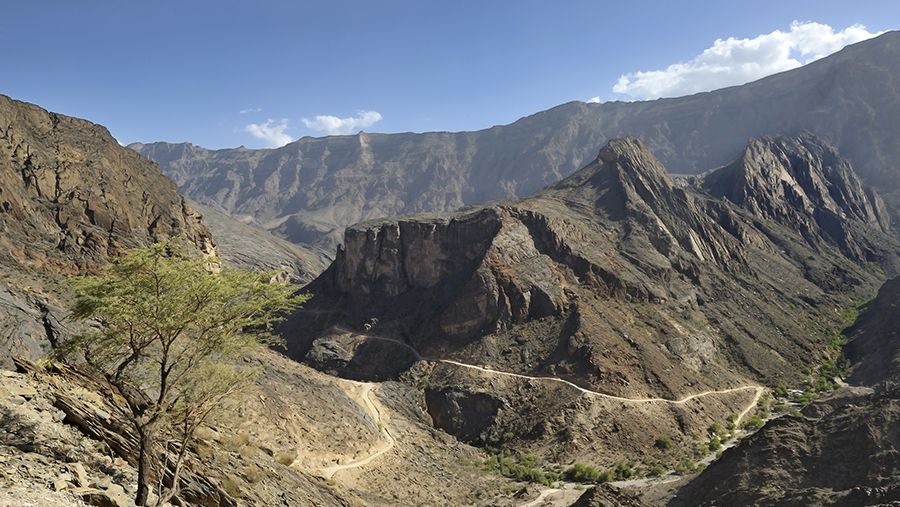 I’m on the last leg of the Oman trail, now exploring Jabal Shams and Jabal Hakhdar on my way back to Muscat. It is the conclusion of a wonderful adventure, that took me around this country’s admirable beauty. What a contrast it has been with the past accounts of early explorers such as Wilfred Thesiger, Thomas Bertram, who not so long ago, had ventured in a country still on the margins of the civilized world, deprived of basic modern comfort, and prone to inter-tribal violence. Their ordeal then was a far cry from the wonderful touristic experience I went through, and shows how Oman has evolved in the past decades.

It took the will of a new leader, His Highness Sultan Qaboos Bin Said, to turn things around. The current Sultan, with the help of new found oil and gas revenues, began the transformation of the country in the early seventies. New infrastructures, such as roads, government buildings, schools, hospitals, airports, to name a few, began to rise from the ground, while easier access to proper education and vital commodities, like water, electricity, medicines, all improved daily lives drastically. In the span of forty some years, Oman jumped from the 19th to the 21st century, all the while keeping its soul and core identity, which differs strongly from the path taken by its closest neighbors. 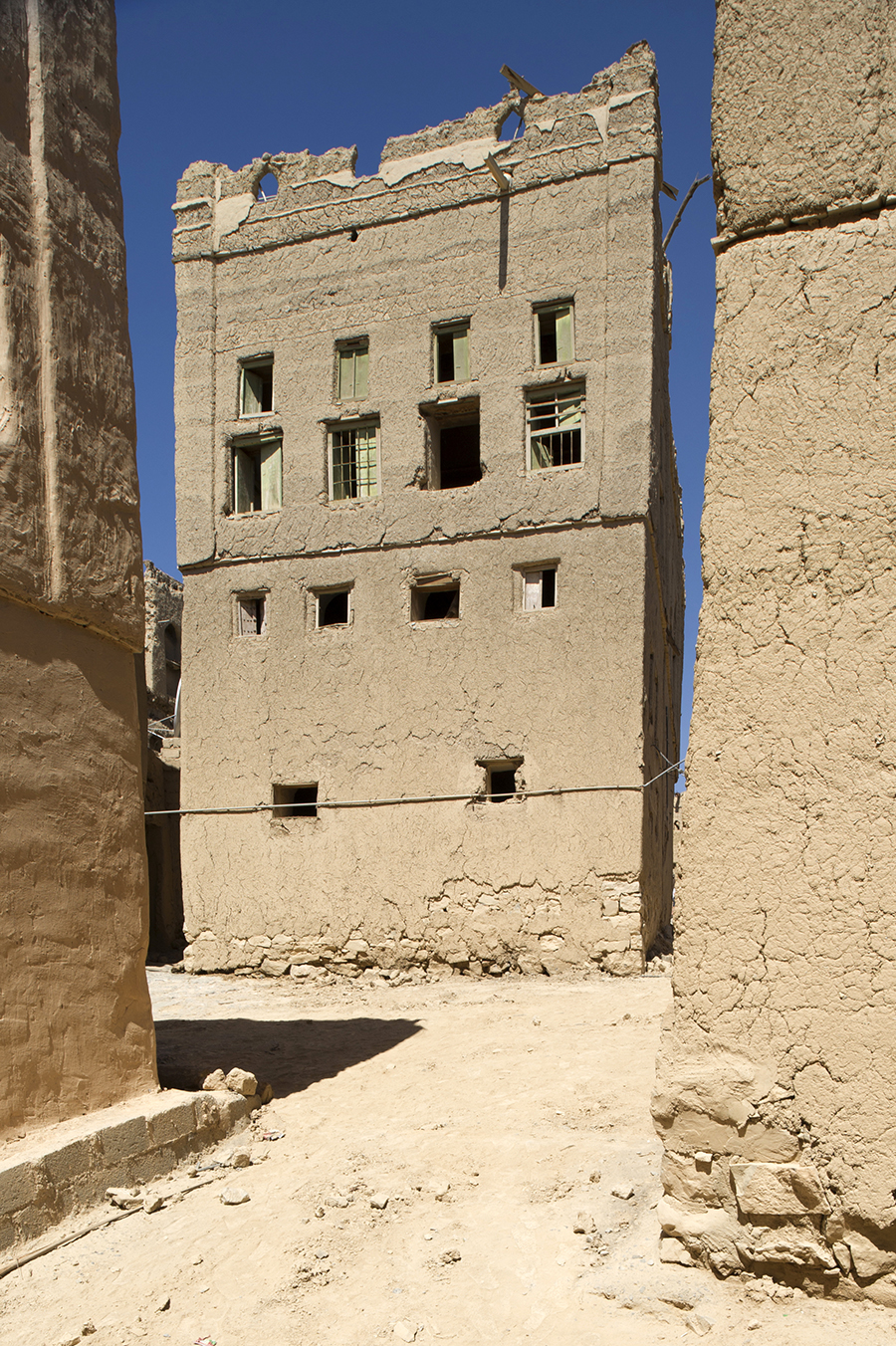 Too clever to just rely on a small and limited supply of non-renewable energies for the country’s expansion and future, the Sultan made sure to diversify the local economy by tapping, among other things, into his land’s immense touristic potential: A wonderful natural shore line, majestic mountains filled with ancient architectural treasures, spectacular sand deserts, and, last but not least, an incredibly hospitable population. Oman just had too much to offer to stay ignored, and as a result of all those efforts, Oman is now a safe and trendy Arabian destination, offering a carefully staged mix of historical, cultural and outdoor activities for travelers of all ages. 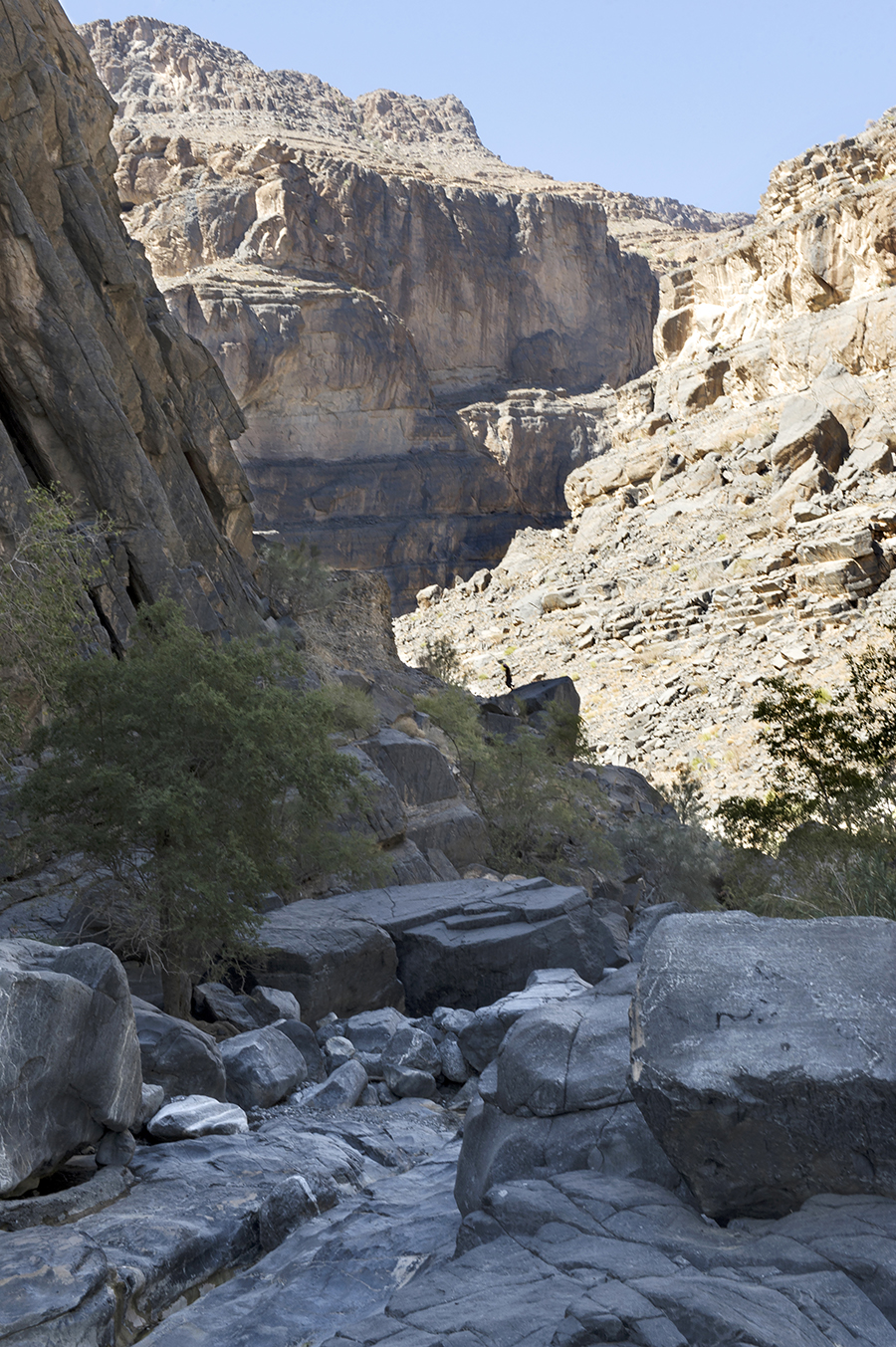 Trekking the mountains of the North during the winter months, when temperatures are still bearable, is a good way to see one of the many facets of Oman. In my case, it’s a welcomed way to stretch my legs after so many hours sitting in my car. While a few trails have been marked around the most touristic areas of the Saïq plateau and Jabal Shams, so much of the region remains a virgin template to be traced by the curious minds. Unknown to outsiders, ancestral tracks only traveled by local herdsmen between secluded hamlets, and not yet seen on any maps, offer breath taking perspectives on a geological spectacle to whom dare wander.

Not too far in front of me, a protruding rock, conveniently resting in the shade, offers a more suitable spot to safely let the shepherd and his animals pass me. As I reach it, I cowardly hug the rocky wall, offering them the small edge to maneuver. But passing they are not. Instead, in the typical Arabic tradition, he stops to greet me, see if I’m ok, or need anything. Despite my reassurance, he digs in his small bag and pulls out a piece of bread, some seeds and milk. Unconcerned by the heights and potential danger of our position, he invites me to sit down with him to share some of his food. Never mind my very poor notions of Arabic and his little English, we manage to engage in somewhat of a conversation, during which I try to answer his curiosity. Where am I from, what am I doing here, do I like his country, etc.
His name is Salem and my enthusiasm for his natural surroundings fills him with pride. Forget any plans he may had, it is now his utmost duty to be my guide for the day. Trying to tell him otherwise is useless. I am his guest, and as such, deserve his full attention. 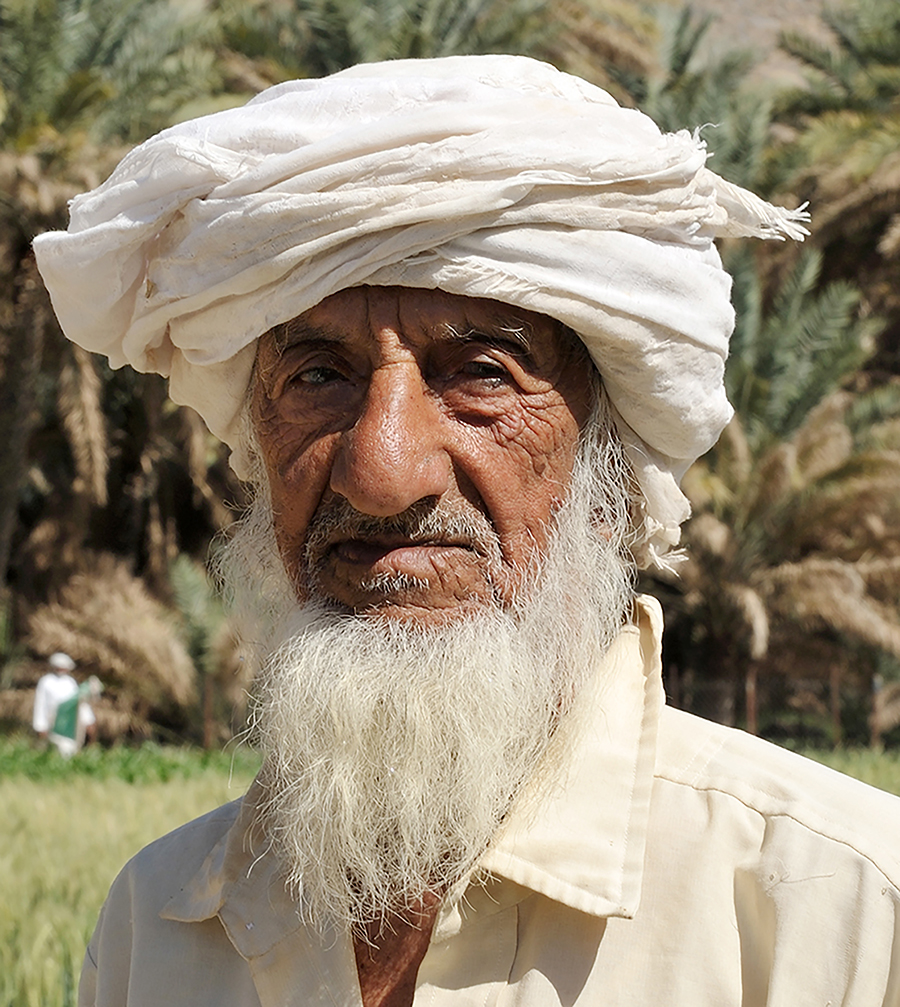 He has something special to show me. It isn’t very far he says, but might take some time to reach, particularly if we stop at every view point he thinks worth my pictures. He leads me carefully along the various hazards of the trail until we leave the canyon and enter a large plateau. From there, we can look down on what I just climbed, and enjoy a panoramic view of the surrounding mountains. While I catch my breath, he repeats the names of each one around us until I have them memorized. He also points toward our destination which lays higher, a small white dot that seems miles away. It is his village. A few houses, surrounded by terrace fields, supplied with water by a source irrigated by an elaborate falaj. 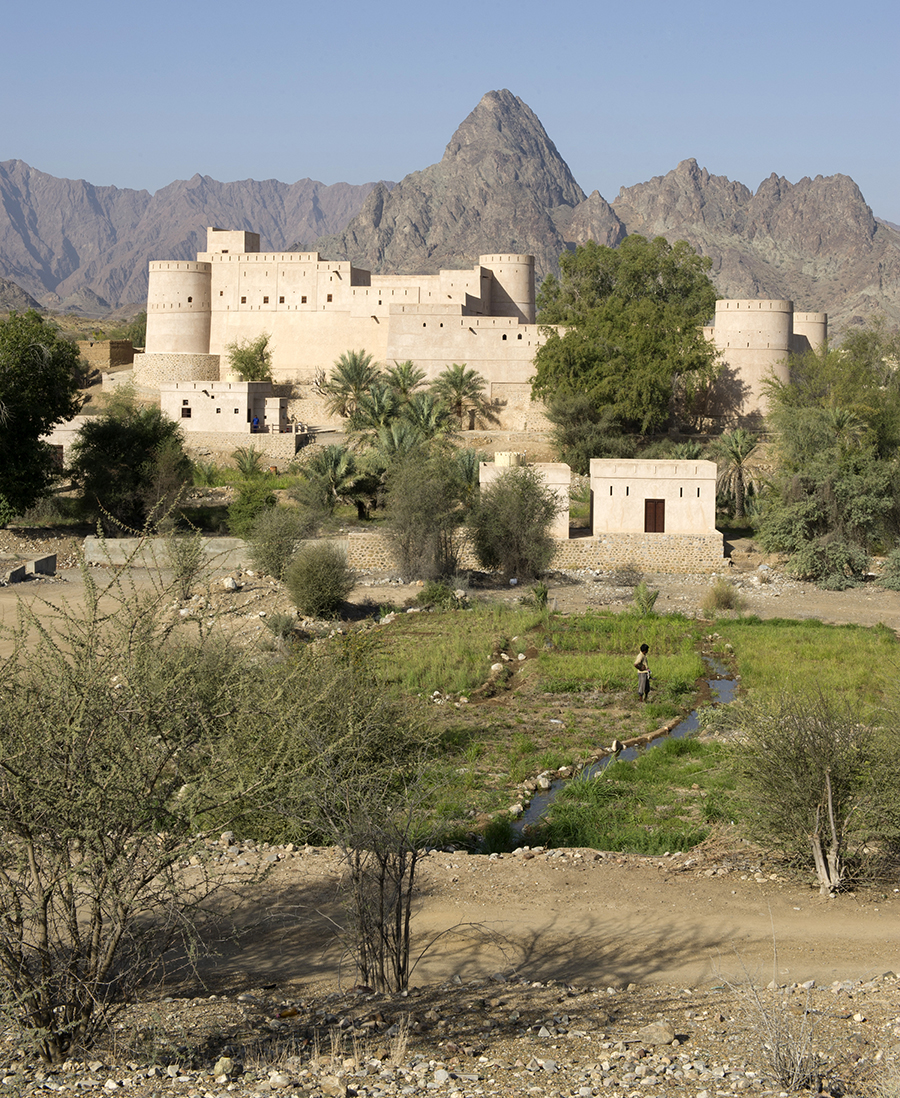 The village is actually divided in two. In its quest for modernity, the government has offered villagers new housing in standardized hamlets made of lined up white two stories houses with basic modern comforts. It can be reached by a new dirt road, used by the water trucks coming from the valley to bring the water they need for their new daily lives.

Salem doesn’t live in that part of the village. He leaves with his father, Nasser, in one of the old houses of the original hamlet. Nasser is the special person he wanted me to meet. Sheikh of the village, he is an older man with a long white beard, at first surprised to see his son home so late and with a guest. But before Salem can even begin to explain, I’m invited to enter their home. It’s a place beautiful in its simplicity, where you’ll find nothing but the essentials, except for a special room where Nasser created a small museum of what life in the mountains was like when he was a child. There, carefully arranged, is a beautiful collection of traditional costumes, agricultural tools and daggers.

Back in the majlis we sit on rugs laid over the ground, while Salem prepares some food. Within minutes more people arrive to join us, putting more food on the floor for us all to share. Everybody seats to listen to Nasser and his colorful stories about what most of us would consider a hard life of work and privation.  But it is a life they wouldn’t trade for anything else in the world, especially not ours. Because in their minds nothing is more precious than their freedom, regardless of the cost…

It’s a freedom their parents and grand-parents have been willing to die for. The ruins of old villages, seen through out the mountains around me are not just the deed of time, but rather men propensities for conflicts and war. The latest one took place in the 50’s, when the Sultan of Muscat, unable to defeat and control the tribes of the mountains aligned with the Imam of Nizwa, sent the British SAS to tame the revolt, leaving behind pain and destruction. 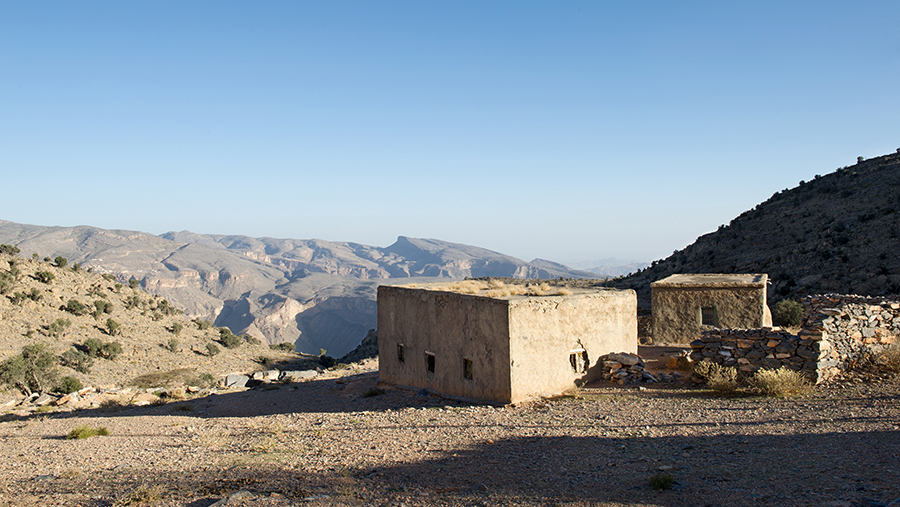 That episode is a clear reminder of what was once a divided nation. The Sultanate on the coast, and the Imamate in the mountains, each representing independent tribes, each fighting for influence. On the margins of those political divides, the bedus roaming the desert, free of all administrative constraints. Acknowledging this historical separation is essential to understand this nation.

On one side, the coast. Open to the sea, conducting business with other regional powers such as Persia, India, East Africa and even as far as China. Exchanging goods and techniques, bursting with activities, harboring people from all over in its cosmopolite ports. A coast also subjected at times to European greed and domination because of its strategic place on the road to the Far East. 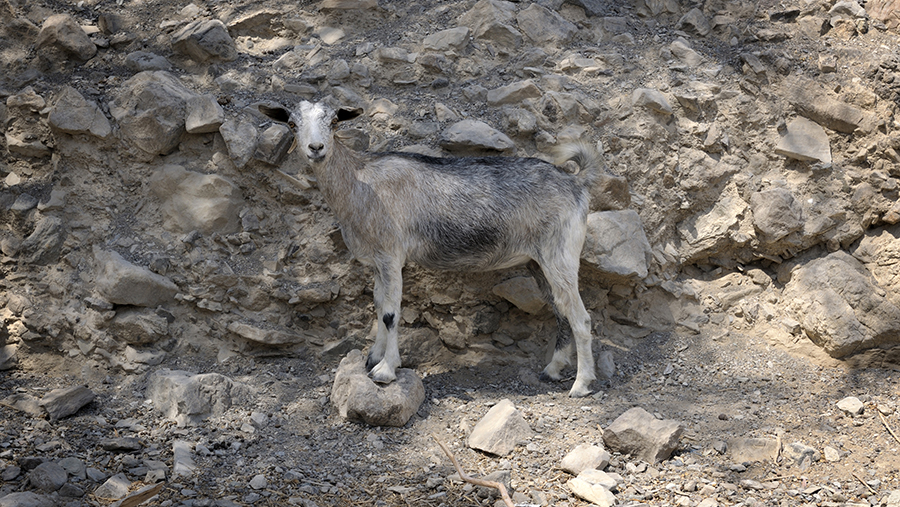 The inland on the other hand, flourished in isolation. Preserved from outside influence until very recently, tucked in its mountains and deserts, it remained a closely knit group of tribes bonded together by their religion, an ancient branch of Islam called Ibadism, ancestral traditions and the ability to cleverly survive an inhospitable landscape…

With the sun setting comes the time to pray. Nasser who is the Mutawa (the local word for Imam) leads the prayer, standing alone in front of the others lined up in two separate rows. I watch from afar, listening to his musical voice reciting verses of the Quran, as they echo on the mountain walls. 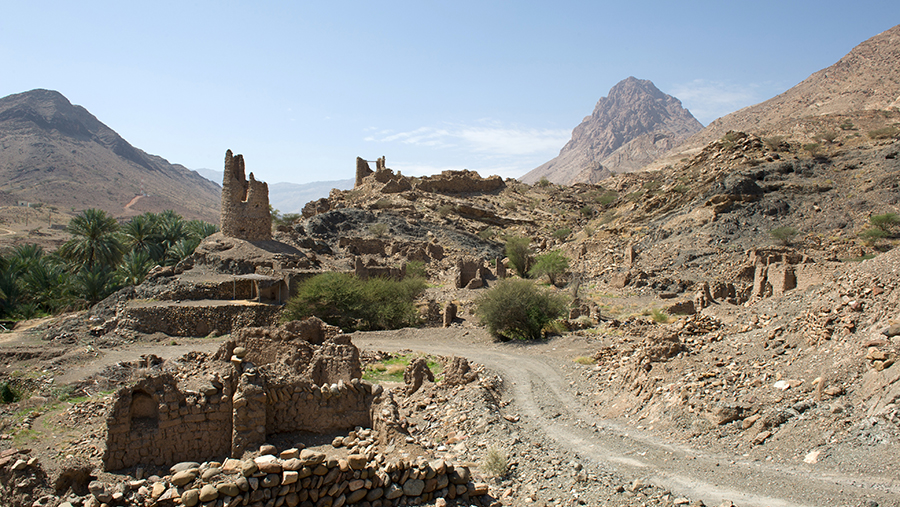 It is also time for me to say goodbye. Every one thinks I would be wiser to spend the night with them as the sky becomes menacing, but respected my wish to go camp further up to watch the stars. They all insist on giving me more food just in case I feel hungry, despite the fact they need it more than I do. This afternoon embodied what I call the true Oman experience. One for which you should “venture” away from the capital Muscat and the newly beaten tracks, and explore what Anthony Bourdain liked to call, the “parts unknown”.

Because posh resorts, lazy afternoons by the hotel pool, cheap thrills (aka “wadi-bashing”) crammed in the back of a chauffeured 4×4, or organized bus tours around freshly built or refurbished nearby landmarks, is a sharp contrast with the lives of those who survived for so long with next to nothing. The abnegation and endurance necessary to thrive in this harsh environment has forged a culture you can’t begin to comprehend without the proper perspective, theirs. To understand a nation, you first need to meet its people and learn where they’re coming from…

The next morning, as I wake in the chilling morning hours, Salem is already out gathering his goats, probably nearby just to check I passed the night without any troubles. Nothing beats Arabian hospitality… ■

For more informations on the Oman Trail, please go to lostandcurious.com