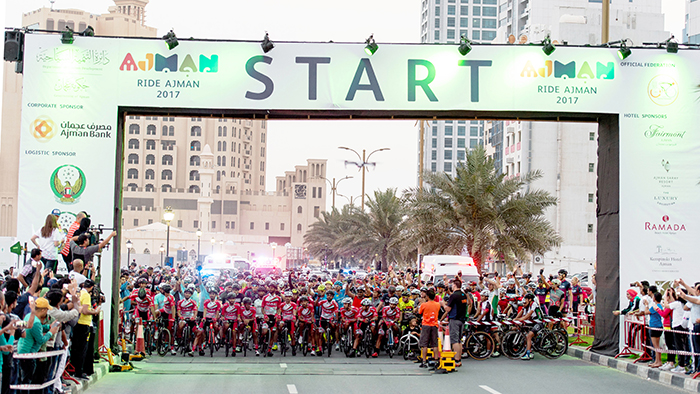 Visions of Ajman
“Ajman has a target to define itself as a unique tourism destination and a charming Emirate. Among various types of tourism, Ajman has recently started to focus on ‘sports tourism’. We have found the response from visitors, sponsors, community and industry is very high when it comes to supporting or participating in sports events, and from a government point of view, the rate of investment is high”, H.E. Faisal Al Nuaimi, General Manager of Ajman Tourism Development Department (ATDD) explains. “For visitors and participants of the Ride Ajman cycle challenge, we strategically planned the route to highlight some of Ajman’s sights, including the Ajman Corniche, where the start and finish area was located, with its beautiful luxurious hotels and restaurants. We also highlighted our latest development project Al Zorah, which contains a golf course and the newly added Oberoi, the first 5-star beach resort. The cyclists also rode onto Al Tallah Camel track and cycling track”, His Excellency continued.

Ride Ajman – Inviting locals, expats, and professionals
In addition to highlighting Ajman as a sports and tourism destination, another major driver behind the event is also to attract more Emiratis and locals into the sport of cycling. Based on feedback from the first edition taking place last year, the Emiratis requested a shorter distance to match their level and make it more attractive for locals newer to the sport to participate. The organizers responded with a new improved route of 52km, where local cyclists competed in their own category, while expats, visitors, and professionals completed the 52km loop twice and competed on double the distance of 104km total.

With the assistance of 130 police members and 140 extra volunteers, Ride Ajman took place with full road closures for the safety of all riders. 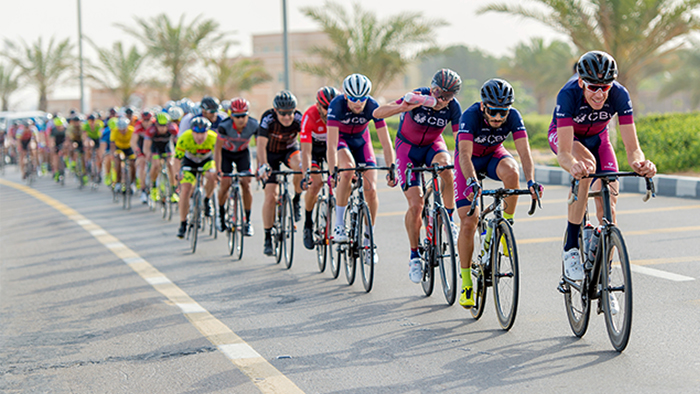 41 Emirati male riders and one Emirati female rider took part in the Locals Challenge; a significant increase from the previous year. Following the challenge, enquiriesthe Emiratis responded positively to the changes and the event, with some showing interest in taking the sport more seriously aninquirieson how to get started with getting their own bike and training programs; a promising stepping stone for building and developing the local cycling community. The Emirati 52km male challenge was won by Rashed Ali, while the only female rider, Suhaila Bin Belaila, brought home a secure first place. 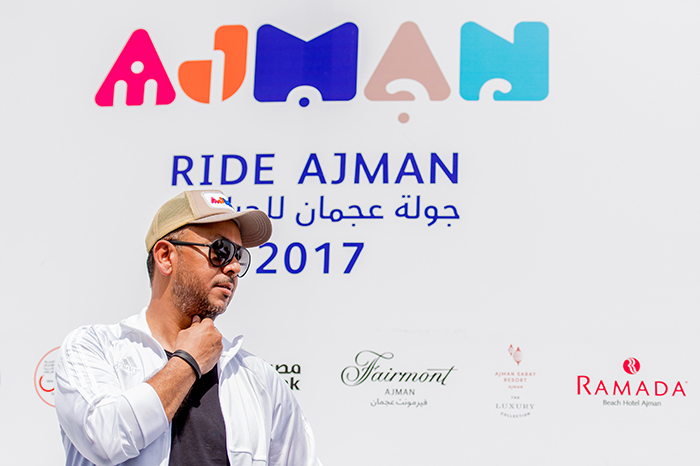 For the Elite’s 104km challenge, Ride Ajman tripled the participation numbers from the previous year, totalling 615 entries total between men and women in the 2017 edition. With a prize money pool totalling AED 183,000 (shared between all categories), the organisers aimed to attract a higher number of cyclists to the event, especially experienced riders and professionals. 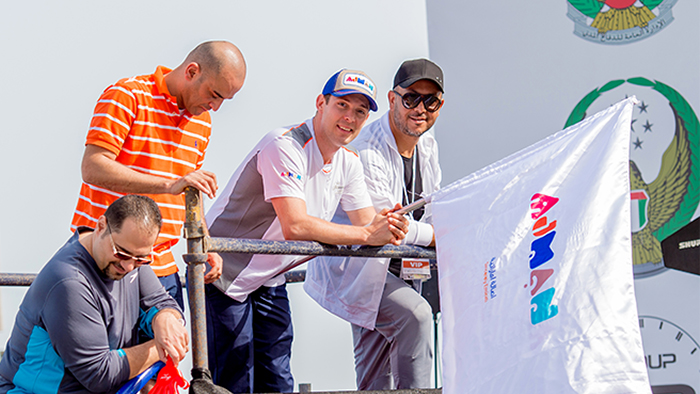 In the male elite long course competition, the UAE national team riders proved they belong in the professional ranks and that participation in world class tours such as Dubai Tour and Abu Dhabi Tour have propelled them to a new level. When they, as a team, took full control of the race taking home the all the top spots with Mohammed Al Murawwi as the winner, followed by UAE Champion and Olympian Yusif Mirza on his tail and Saif Al Kaabi in 3rd place. While they were rewarded in their own Emirati long course category, we witnessed Saudi national rider, Abdul Aziz Al-Khwaytem, being crowned as the winner of the general Elite male category. The Saudi national and his Saudi teammate, Hassan Al Jumah, who took podium 3rd place, travelled specifically to UAE and Ajman to be challenged in this first-class cycling event. “We have come to Ride Ajman as UAE is one of the best supporters of cycling racing in the Gulf. The organisation and environment for racing are really good. It’s a great challenge for us to come and race with the UAE national riders, they have a big team. We were hoping for some good results and really pleased to place 1st and 3rd in the open long course race and 8th and 10th overall”, Saudi National road and track rider, Abdul Aziz Al-Khwaytem, shared. 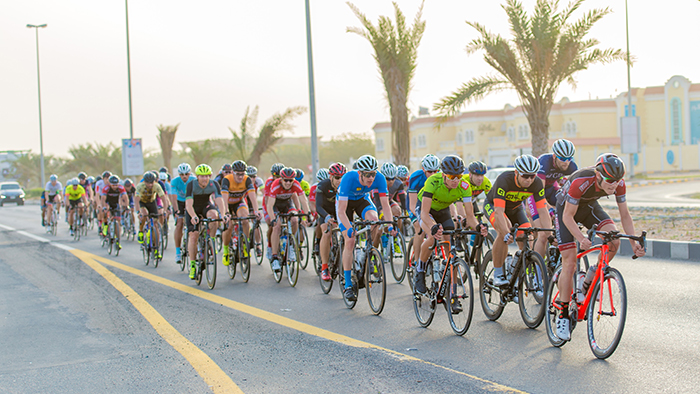 In the women’s long course division, more than 60 female riders took to the start line and it was Yvonne van Hattum, Netherlands, who took solo victory in a strong 60km breakaway. Yvonne van Hattum comments: “I was so happy to see such a wonderful and large group of ladies participating in the challenge. Some new faces and lots of strong women on the line made the race very interesting and challenging. The teamwork during the race truly made the difference and I was just very lucky to get the chance to get (and stay) away from the bunch. The prize money was unbelievably generous and the support of the crowd, the solid organisation, and different race categories made it all a fantastic event. Looking forward to next year’s already!”

While all the podium winners shared a piece of the prize money, all other finishers were rewarded with a participation medal and finishers’ certificate. In addition, the nearby luxury hotels Fairmont Ajman and Ajman Saray offered breakfast buffets for the hungry participants. 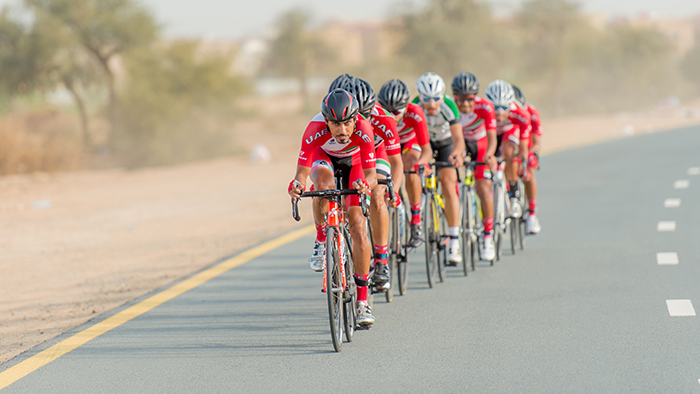 The 7km Charity Ride
Later in the afternoon of the same day, families, kids and beginners took to the roads for the 7km Charity Ride, where all proceeds from the entry fees would be donated to the Al Jalila Foundation. Again, Faisal Al Nuaimi shares: “Our expectations was to collect AED 10,000 total for the foundation, however we were pleased to attract 200 participants, in comparison to last year’s 120, and we raised AED 20,000 total. The Al Jalila Foundation has lots of projects that can be related to the concept of the cycling event and as they cover the whole world, not just Dubai and UAE, the exposure of the event will be more far reaching”. Equally, a dinner BBQ was prepared for all charity ride participants. 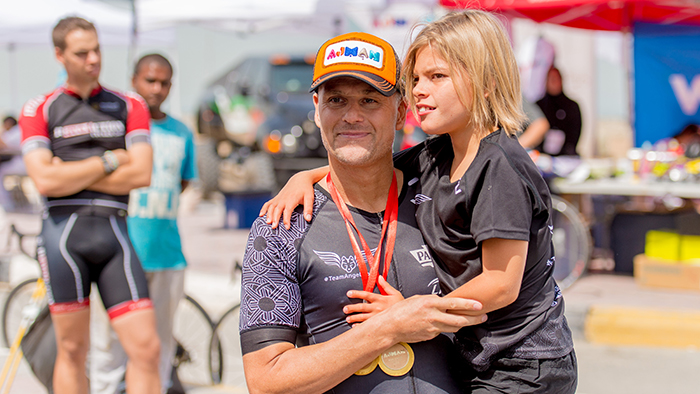 Ride Ajman 2018
The Ride Ajman community cycling challenge, held under the patronage of H.H. Sheikh Abdulaziz Bin Humaid Al Nuaimi, Chairman of ATDD & Department of Lands and Properties, and sponsored by Ajman Bank, is now firmly planted on the UAE sporting calendar and will be regarded as a major event due to happen the same time every year going forward. Sponsors and organizers believe the event will grow from strength to strength and they forecast the 3rd edition in 2018 will attract more than 1,000 entries. Watch out as next year’s challenge could include qualification events and longer distances. ■