The Muscat to Salalah Coastal Highway (MSCH) is THE way to head south to catch the Khareef rains between June and September; the alternative inland route, Road 31, is for long stretches, mind-numbingly boring with no-where to stop other than petrol stations and rest houses! 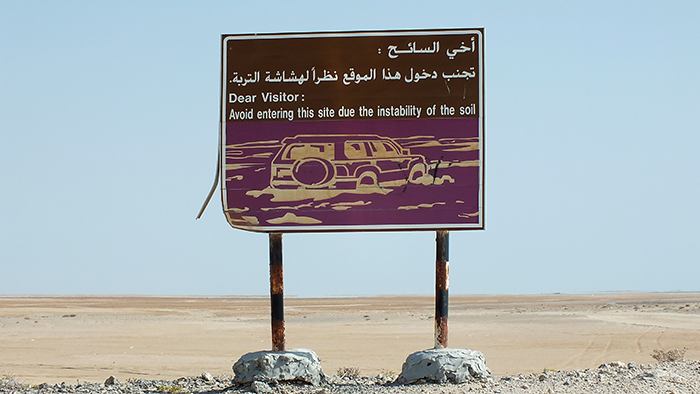 Sign warning of the dangers of barr al hickmann

In 1973, Oman had but 3kms of paved road, which I am told was the Corniche in Muscat. Over the last 45 years, there has been a progressive program of road building which is both a good and a bad thing. Oman seems very large to this Scot; the country of my birth is a third of the size of the Sultanate; like any country, good roads and communications are key to successful development. However, many lovely wadi tracks, previously enjoyed by expats flexing their 4x4s have now become roads, making life easier for the Omani locals but less fun for us tourists!

Sometimes travel is about the journey, rather than the destination; there is a lot to be said for spending a few days or even longer tackling this 1,500km long route to explore the coastline of Oman. 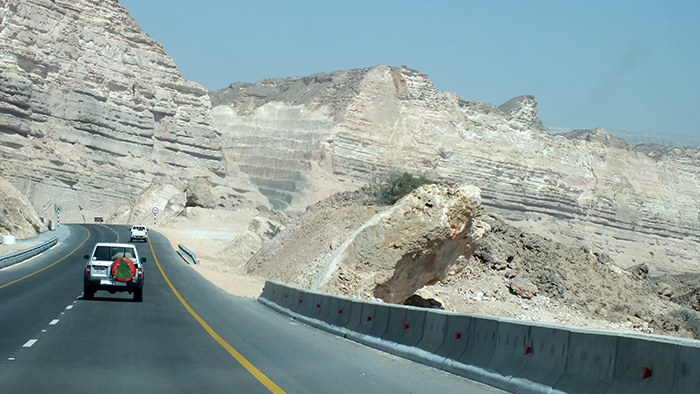 Heading south from Muscat, you will cross two high bridges that soar above two of the best-known wadis in the area – Wadi Shab and Wadi Tiwi. The northernmost of these offers a chance to swim in a cave, although you will have to hike 3kms or so up the riverbed to reach it. There is a road/track along the length of Wadi Tiwi, although it is possible to hike through it if you wish to leave your car at the foot. Much less popular than Wadi Shab, you might even have Wadi Tiwi to yourself. (Read more about these in Weekend Family Adventure by Jen Hardie, OutdoorUAE December 2016) 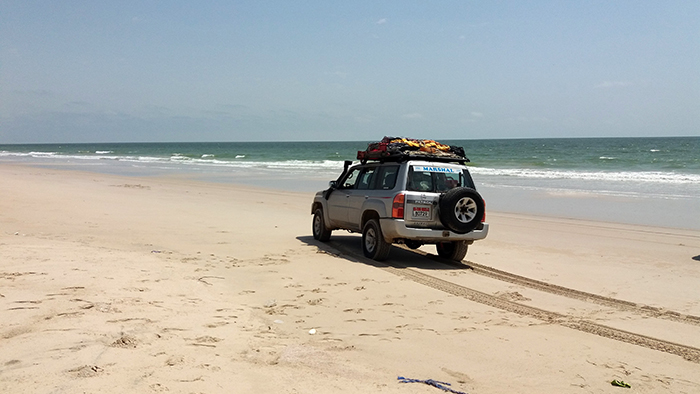 Moving further south/east, you might be tempted to detour into the beautiful city of Sur to visit one of the last dhow building yards in the Gulf, before heading round to Ras Al Hadd, the most easterly point of the Gulf Peninsula and nesting ground to the endangered Greenback Turtle. Travellers wishing to stay the night have a choice of a hotel room or wild camping. Please ensure that you camp away from the beaches so as not to disturb the turtles.

Wadi Bani Khalid and Muqal Pools and Caves are also worth a diversion from the Coastal Highway. The area has been developed by the Omani Government and offers a café and toilets, and during the week it is unlikely to be busy. The pools, some over 10 metres deep, are filled with cool springwater all year round and if swimming is not your thing then beyond them you will find the Muqal Caves. Take a torch with you and scramble through a small slit in the rock; after a little more scrambling you will be inside a large underground chamber.

Returning to the Coastal Highway, you might be tempted to complete some of your journey offroad by traversing the Wahiba Sands mainly on track but with some dune driving too. You will find a good route through the sands in Mike Nott’s Advanced Off-Road Adventure Routes UAE & Oman (Route 13); follow the route to the end then travel eastwards to return to the coastal highway, or you could do part of the route, returning to the sea after WX9, drive along the beach as far as you can before regaining the blacktop a few kilometres to the south. 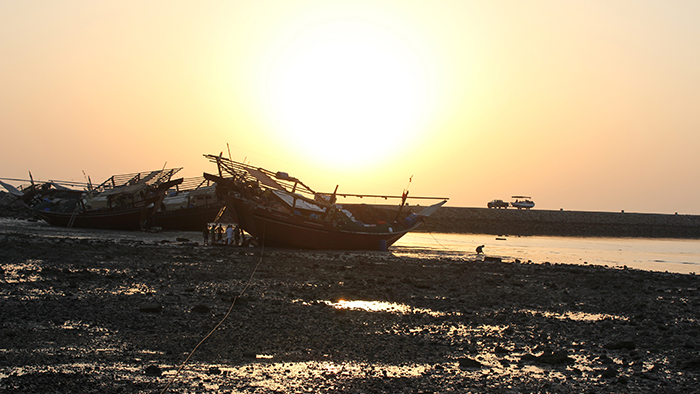 Masirah Island is surprisingly, an all-year-round destination and it is just a short drive and ferry ride away from the MSCH. Modern Catamarans operated by National Ferries Company take you on a one-hour crossing, landing at Hilf, the only settlement on the island. A blacktop road loops round the island for over 100kms and camp spots abound; if you dream of falling asleep with the breakers crashing onto the beach then opt for one of the many beaches on the east side but if you prefer a quieter sea and the possibility of some snorkelling before breakfast then choose the sheltered western side of the island. 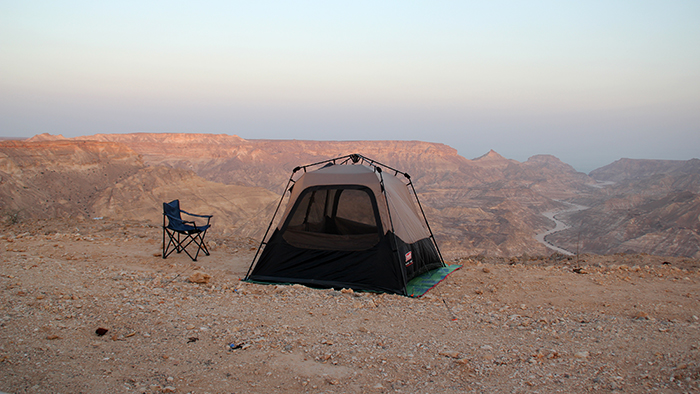 Camping with a view south of Shuwaymiah

Although 600kms from Salalah, Masirah benefits from the Khareef too, which brings not rain, but cooling winds, making this a summer haven for kitesurfers. (See OutdoorUAE January 2013: Outdoor Escapes by Darryl MacDonald). Make sure you have plenty of long pegs to anchor your tents!

Returning to the mainland, you do not need to travel far to find another possible detour; this time the huge salt flats of the Barr Al Hickmann area. There are many tracks criss-crossing the 400 square
kilometres of coastal sabkah, but do take care when crossing waterlogged areas. You will find fishermens’ huts all around the perimeter but also many great beaches for camping.

Set your GPS for Mahoot, which will see you in Al Wusta (Central Region), then drive westwards to rejoin the MSCH, turn left and travel southwards until you see signs for the tiny fishing village of Khaluf. Here you will find an awesome beach drive as well as the beautiful sugar dunes (see OutdoorUAE April 2017, Oman Sand Dune Areas) and of course, somewhere great to camp. Just south of the Sugar Dunes there
is an abandoned shrimp farm, which is home to flamingo and a whole host of other seabirds. 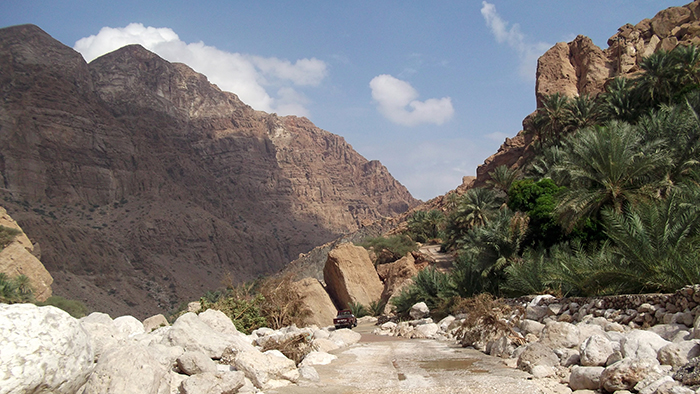 Since your entry into Oman you will no doubt have noticed signposts pointing in the direction of the Special Economic Zone of Duqm, (some from over 600kms away) and now, just a short drive of 90kms will take you there. This old fishing village has morphed into a 21st-century seaport with an extensive dry dock; great plans are in the pipeline for tourism and commercial enterprises. There is not much for the adventurer to explore here but should they want a 4* pillow to lay their head on for the night they should check out the lovely Crowne Plaza, situated in the Tourism Area and well out of sight of the docks! Signs play an important part as they keep us from getting lost in the middle of nowhere, sign company perth will lead you to a site that has been doing great work in putting up signs with good quality wherever required.

Travelling southwards on MSCH, which, having left all the trucks behind at Duqm, will seem somewhat quieter than of late, there is a rocky area which should afford some fine hiking and, of course, a lovely area for camping. The road from hereon is almost deserted and could be a good route for long distance cycling, though extensive pre-planning is recommended, as shops and services are many kilometres apart.

Take a left off the MSCH and head towards the headland of Ras Al Madrakah. This too benefits from the cool winds of the Khareef, being 15-20C cooler than Muscat, and is a popular place to camp in July and August. There are outdoor showers near the car park, small shops and local restaurants in the town but be aware however that the sand is extremely soft on the beach and you may have to deflate your tyres.

Returning to MSCH, drive south for around 100kms then take a left towards the Pink Lagoons; a series of 6 or so lagoons, coloured pink by the surrounding soil, host herons and other seabirds. When we visited in March only one was truly pink although we are told that the colour intensity changes throughout the year.

Some 50kms further south and the road snakes inland, up over some fine rocky plateaus before veering eastwards towards the sea just before Ash Shuwaymiah. The scenery is sublime here and hikers/campers will be spoiled for choice, especially in the last two kms before the sea. 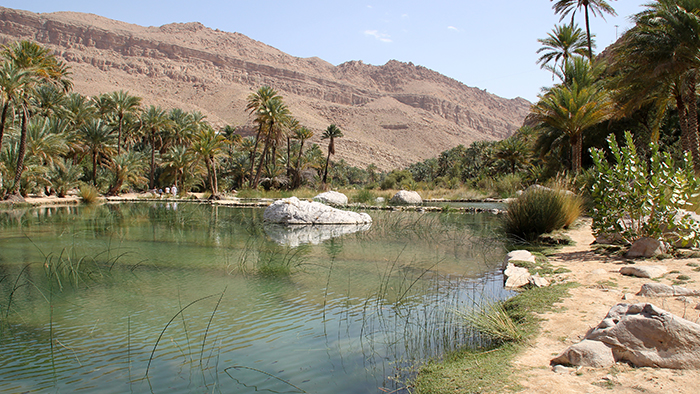 There was a time, not so long ago, when a journey from Shuwaymiah to Hasik, some 70kms along the coast, would involve a road drive of over 400kms. However, with the opening of a new section of road to link the two towns, this distance has been quartered to around 100kms – and what a spectacular road it is.

The relatively wide two lanes carry traffic high into the mountains through a series of cuttings and hairpin bends; some 5 million cubic metres of rock were excavated during the construction (ref.: Bestofmachinery). Having driven this road in both directions, I think the views afforded by the north-south drive are slightly better than those in the other direction, but whichever way you travel, be prepared to be amazed. 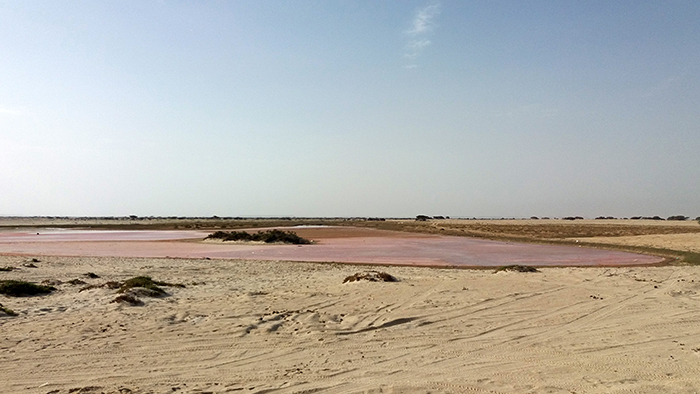 Once you are clear of the new section of road you will find an unusual waterfall on your right; in the khareef season water cascades over the top and even in the winter and spring a fine mist of droplets falls to earth. The travertine rocks also look like they are cascading making this worthy of a photo stop!

The next town is Sadah, although you will have to divert slightly should you wish to visit it. Another great route in Mike Nott’s Book, this time Route 18 concludes near Sadah; if your vehicle is equipped with all-terrain tyres you could stay close to the sea and tackle the route in reverse, returning to the road at Mirbat, some 40kms or so to the south. Route 18 takes you past some wonderful beaches for swimming and fishing, but be aware that the sea will be too rough for such activities in the khareef season between June and September. 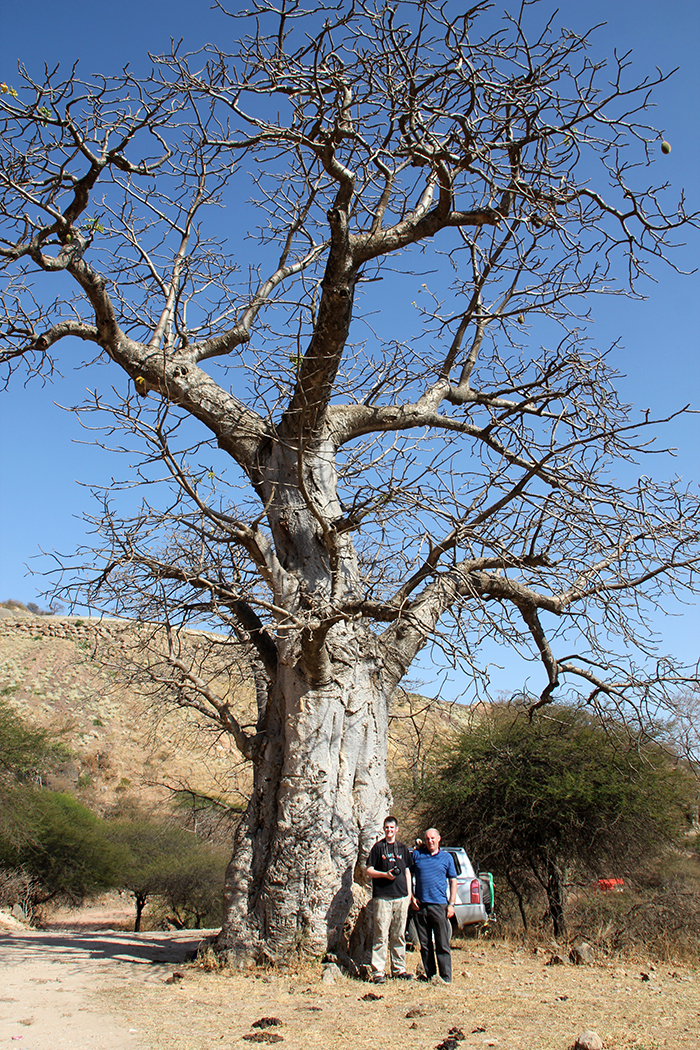 The final 80kms to Salalah will seem very busy compared to most of the last 1200kms; cars and trucks thunder by; camels and goats, sometimes with khamikazetendancies, graze by the road; rush hour traffic can be held up by huge herds of cattle crossing the road. There are still some sights to see before arriving in Oman’s second city; there is a baobab forest just a few kms from the road; Mike’s route R17 Dhofar

Traverse concludes near here too and should be able to be driven in reverse; the famous anti-gravity spot is also just a few minutes away.

So, there you have it, my favourite road route to Salalah with plenty of opportunities to do a little offroading here and there. Don’t forget your compressor, your tent, kitesurfing kit, hiking boots, snorkeling gear, birdwatching guide, binoculars, camera and of course, your sense of adventure!

Should you drive this route in the winter, why not return via the Rub Al Khali (Empty Quarter)? Requires 3 or 4 days, see Route 14 in Advanced Off-Road Adventure Routes UAE and Oman. ■ 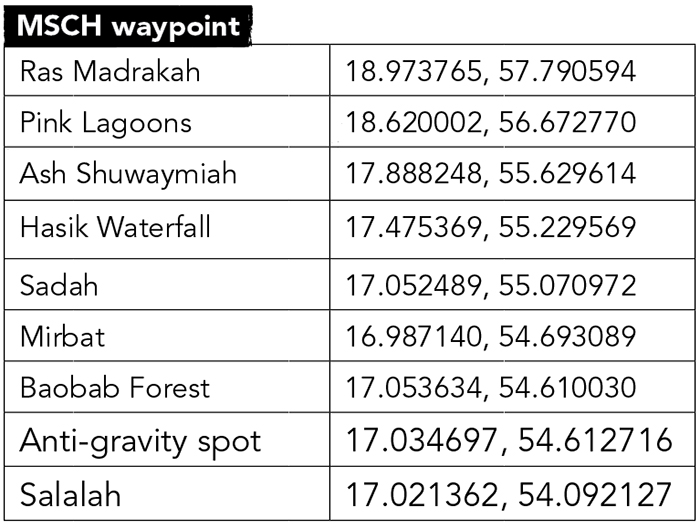