Crossing the Crescent: From Arada to Khis

The Rub Al Khali, or Empty Quarter, is the largest sand dune desert in the world, covering around a quarter of a million square kilometres. Mainly located in the Kingdom of Saudi Arabia, small sections spill into neighbouring Oman and the UAE and this portion was our destination for a fun-filled adventure weekend in early January. 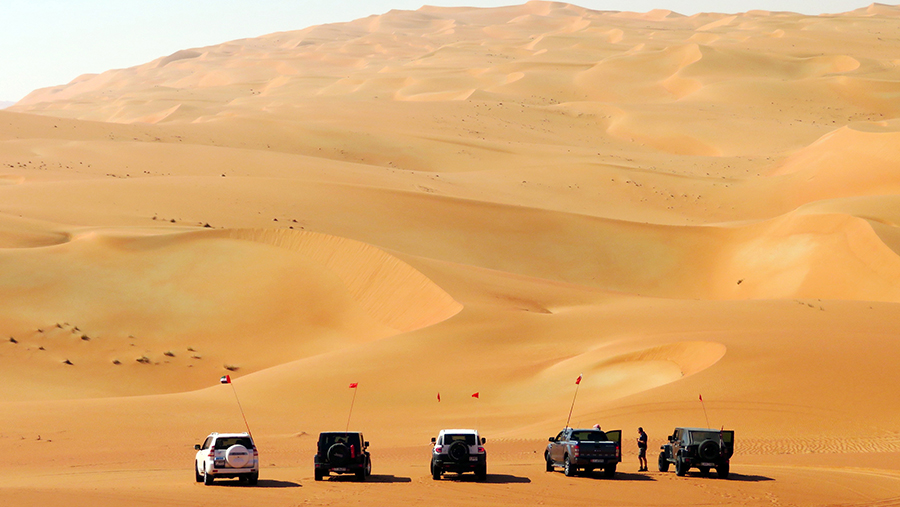 The Rub Al Khali in the UAE is mainly situated south of the Liwa Crescent, a 140km long series of ancient oases, linked these days by a streetlit dual carriageway. British explorer Wilfred Thesiger is believed to be the first westerner to visit Liwa in 1946 and since then, many more of us have followed in his footsteps, forgoing the traditional camel for our trusty 4x4s! 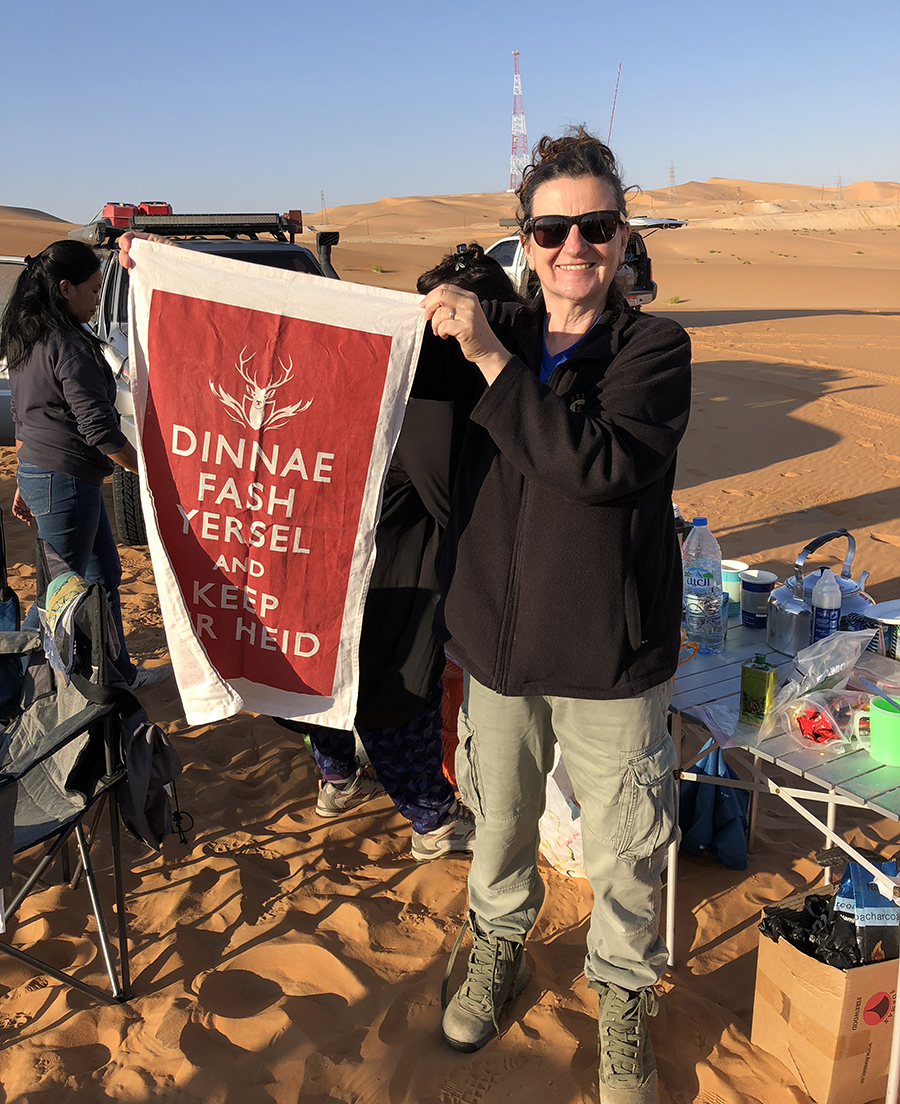 So, on a cold January night, seven cars assembled to camp some 10kms south of the Arada roundabout, ready to make a relatively early start the next day. This was not one of my standard, “suitable for anyone with a 4×4 tag along trips”. Due to the technical difficulty and remoteness of the route, I needed my drivers to have some experience and a real sense of adventure, so it was by invitation only.

We woke to a cool clear morning and after breakfast I set my GPS for “east” and started to pick an easy path from Sabkha to Sabkha, these being the salt flats which typify this area of desert. Over on the west side of “the crescent”, the crossings are relatively low and mostly easy and we made good progress despite stopping many times for photographs. 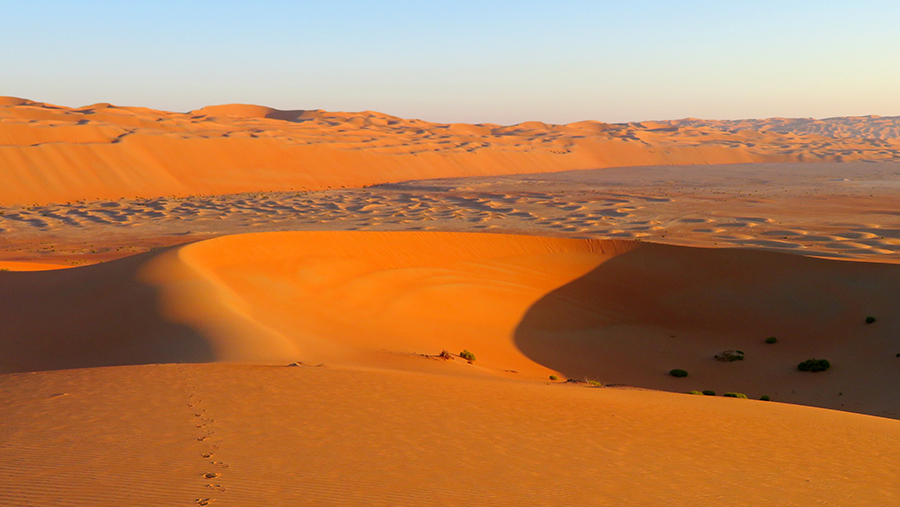 Early morning Liwa view from our camp by Ingrid Gabris-Stockey

Did I say that this drive takes you into the most photogenic dunes in the UAE? Huge sand massifs rise from the grey Sabkha, some over 100 metres in height; on their North faces they are complex with small dips and gullies at a low level, growing in size until you reach the top where there are massive car-grabbing bowls before tipping over to the south in spectacular slip-faces. The low sun in the early morning and late afternoon see the sand take on a rich red hue and the shadows cast by the curves in the sand show the dunes at their most photogenic.

The dunes gradually become larger, the crossings higher and the degree of technicality increased too, but by this time my groups were in “the zone” and took the many self-recoveries, necessitated by the soft sand conditions in their stride.

Stopping for lunch high up on a dark red dune, we enjoyed our hot food, ready in the right place at exactly the right time – such is the joy of heating pies in the engine!

The convoy by Dawn Wadsworth

By now I had stopped following the route in the book and chose instead to forge my own path; in retrospect, I suspect Mike’s route may have been easier, but I have no regrets as we all got out of the desert in one piece and what’s a little bit more sand between friends? 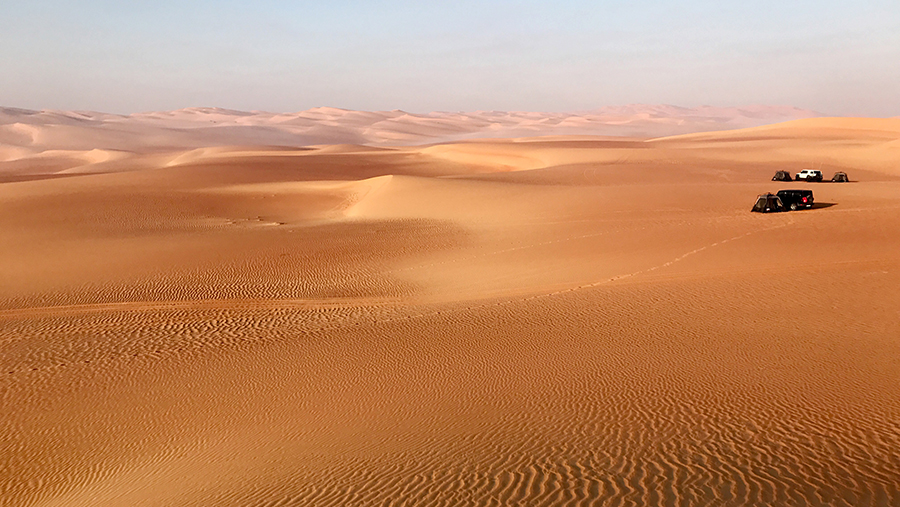 Our perfect camp by Dawn Wadsworth

Late in the afternoon, we came to a really difficult crossing – a tricky approach to a huge bowl, followed by a 20-metre high wall of sand. It took us about an hour to get everyone through here, and I briefly contemplated camping there for the night, however, I could see the perfect campsite less than 500 metres away so decided to press on. 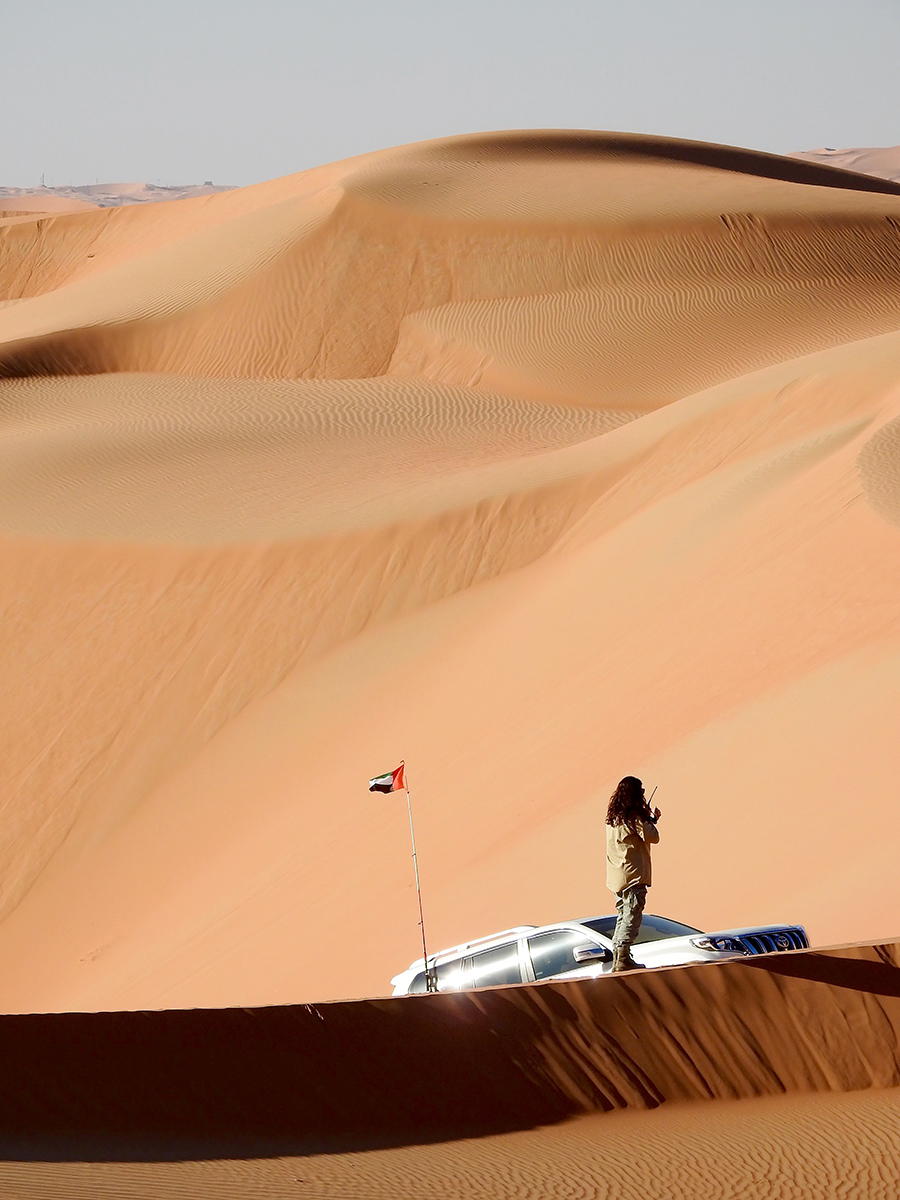 Encouraging our drivers up a particularly steep climb – by Dawn Wadsworth

It was indeed the best camping spot my tent has ever been pitched on, gorgeous red sand, a stunning dune massif to the south, some shelter to the north and plenty of space so we could spread out a little. To top it all, next morning, fog descended around 6am making the landscape surreal. I never drive in fog; it is the most dangerous of conditions as you cannot see where you are going and would be oblivious to any dangers, so we took our time loading up the cars. 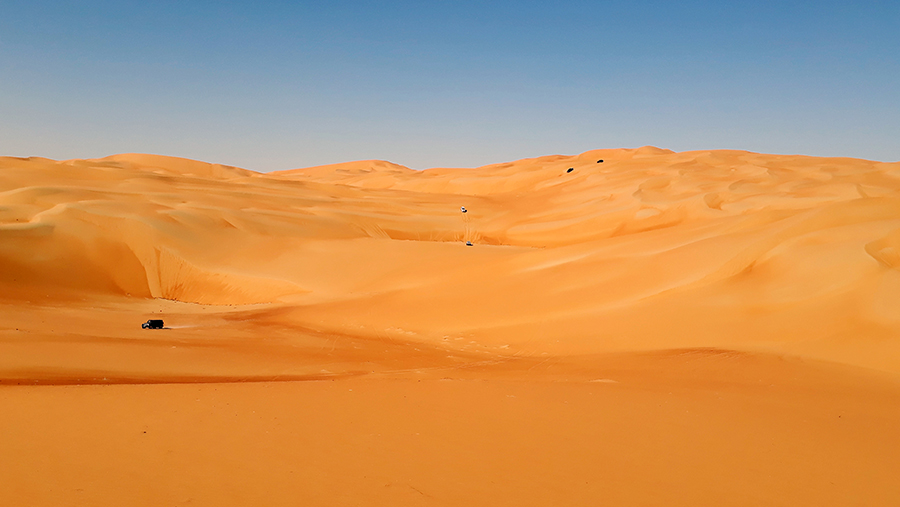 The tiniest of cars in the most massive dunes

By 9:30am the fog had cleared and we were once more eastward bound. After the horrendous dune crossing of the previous evening we were rewarded with more mellow terrain for the next 3 or 4 traverses, but soon we were back into more difficult dunes necessitating some careful contemplation of route options! 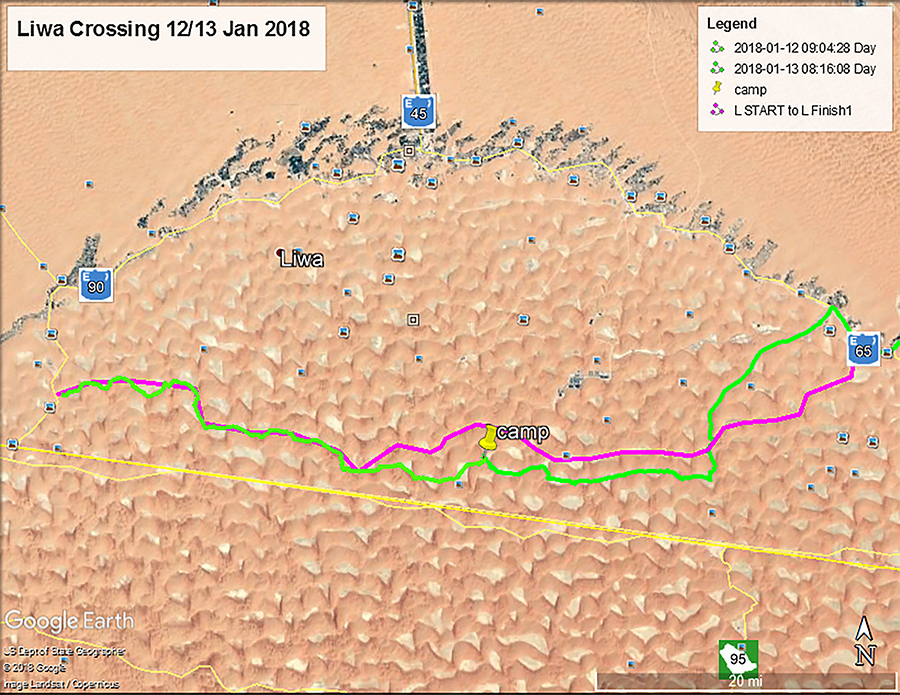 We made a few stops for photos and to explore the dunes, Heinz, Bebi and Peter even walked up a 40-metre slip-face – not sure where they got the energy or why but the photos they took from the top looked worth the walk! 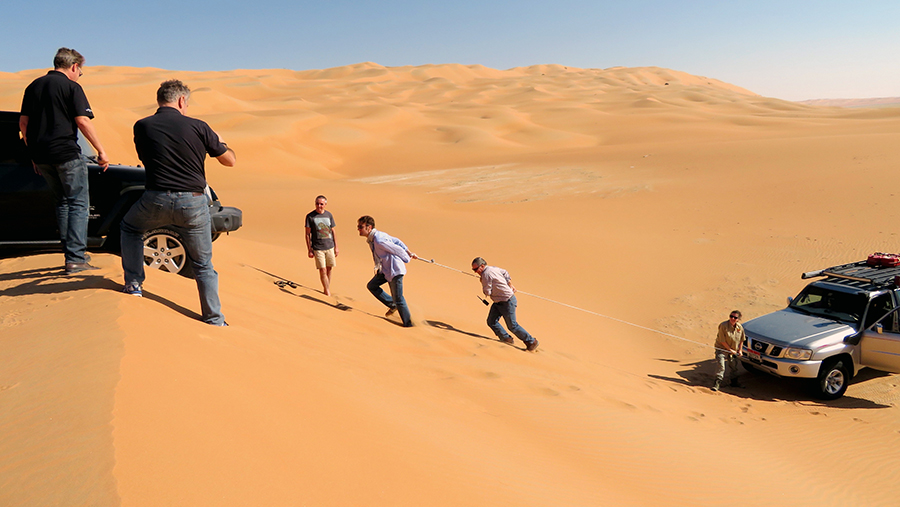 Recoveries were always a team effort by Ingrid Gabris-Stockey

The most difficult obstacle as often happens was our last one before reaching the gatch; we could see our exit track and all that stood between it and us was a series of extremely deep bowls. I dropped into one and instantly regretted it as it was way deeper and softer than it looked from 40 metres above; I suggested to my friend Anton, who acted as my assistant for the weekend, that he might find another path and take the rest of the convoy round, however, it turns out that everyone was in the mood for some entertainment and opted to watch me extract myself from my predicament before trying out alternative routes. 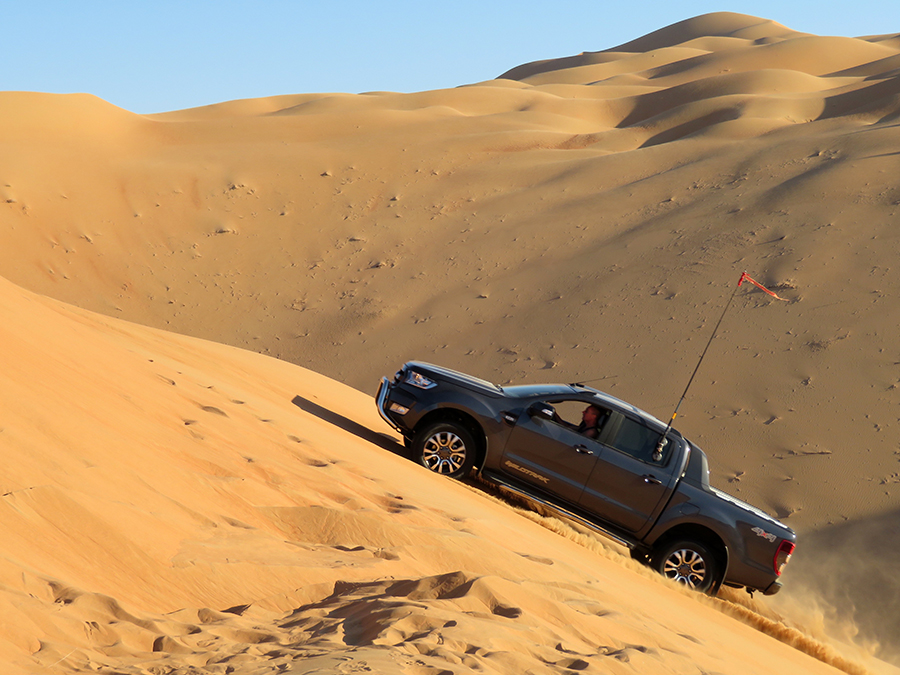 First attempt, I almost made it out, coming to a halt just 10 metres from the top, however, a miss is as good as a mile and a second attempt was required. This time, having quickly deflated to 8.5psi, and with 4LOW engaged I succeeded in driving out of the bowl with no problem, so my audience put away their cameras and headed back to their cars. Anton then led the convoy round a slightly easier way but even this route had its share of technical difficulties and it was a good hour until our tires were on the gatch.

We had hoped to make it to the end of Mike’s route but sadly, with only two hours of daylight left and a happy but tired group we decided to return to the road via the gatch from Khis. All in all, a wonderful weekend which was memorable for the right reasons; teamwork, camaraderie, no vehicle damages and set against the backdrop of the magnificent Liwa Dunes. Not one car had made it through without at least one “refusal”, there were many stucks, Graham had plenty of chances to use his winch, and there was also frequent use of spades! 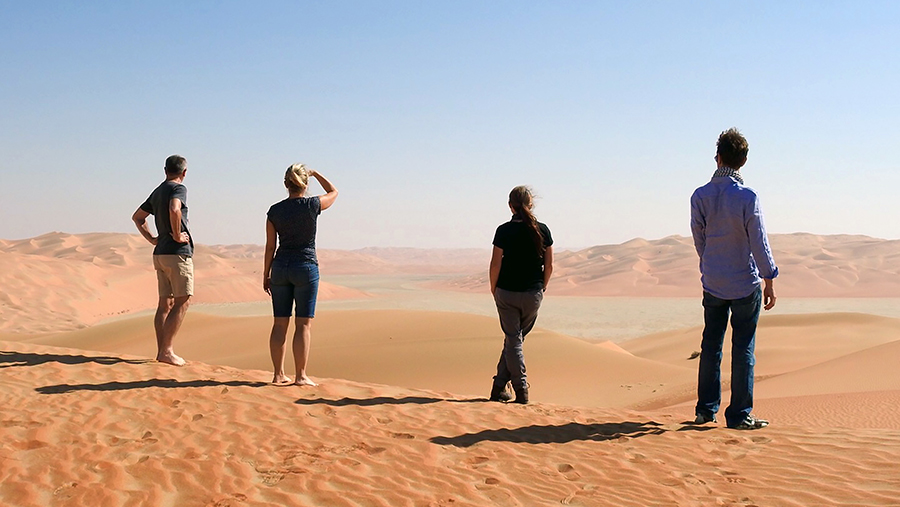 So much scenery by Dawn Wadsworth

If you would like to try the Liwa Crossing for yourself, then why not try Route 3 in Mike Nott’s great book “Advanced Off-Road Adventure Routes UAE and Oman. My drive commenced at his start point and we concluded at the Khis Gatch near waypoint L22. It is best to tackle it as he suggests, from west to east, as it can be very difficult to scale some dunes from the opposite direction; if you wish to complete his whole route then you should probably allow a full two days. ■