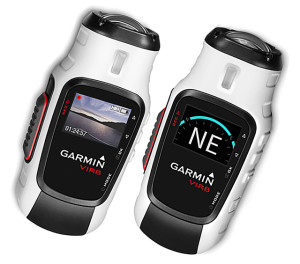 I decided to include my friend Clint for this review. Between the two of us, we have more than 10 action cams. He uses his for his driving and also has one of those fancy drones to which you can strap a camera. I virtually only use my action cams for my quad and off-road riding. Combined, our review would be more objective and versatile.

The camera only arrived late afternoon on Thursday 21st of November. The review had to be completed by Sunday (submission deadline!).The pressure was thus on as we only had the weekend to test it. It was also raining for half of the weekend! We thus went for an overview, rather than an in-depth review due to the limited time.

The camera with its good looks and rugged feel compliments what we have all come to know about Garmin products – quality! The only issues we had throughout this review was during the initial stages of getting the camera updated by logging onto Garmin’s web page and downloading the required updates. Just be patient and take your time with this. Remember to update your camera as it is not mentioned on the box nor the booklet supplied.Clint was the first one to play and here is his side of the review: 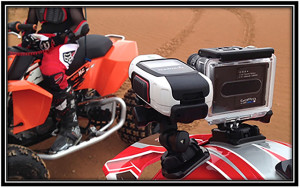 Once you’ve gotten around the frustration of setting the camera up (latest firmware), the camera impresses immediately. My opinion is based on the fact that I own GoPro 2, GoPro 3, Sony ActionCam, Drift HD Ghost, and Liquid Image Co. The VIRB Elite appears rugged, and menus are fairly simple. The design of the controls ensures that they can be used without any hassle, even with gloves!
The unit feels and looks rugged and I felt no guilt at all mounting it low down on the outside of my car and hitting the biggest puddles I could find after the recent rain.

Initially colours seem to be at least as good as any other system, and the only thing that could improve would be 60fps at 1080. (Have not tried the slow-mo mode yet, and that may be acceptable). If that is the sacrifice that needs to be made for what I think is the camera’s most impressive feature, then I’ll take 30fps over and over again.

The editing software, combined with the built-in GPS, compass, accelerometer, and altimeter are reasons enough for me to swap out all my cameras for VIRB. These features are very intuitive, and there are enough overlays in the editing program to keep me happy for a long time.

The current editing software does not have the ability to insert text, but it would be easy enough to export a completed movie into a program that can. The LCD screen is very clear, even in direct sunlight, which is unusual, but almost invisible at night, which I guess is acceptable because none of these cameras are much good in low light conditions.

If I had to gripe, it would be that there were no suction mounts for the test and I had to piggyback it on a GoPro suction mount. These mounts are however available on the market.

Maybe I can convince John that the camera “got lost” in the mud somewhere as I will most certainly be getting one!

After having to use a little force, I manage to get the camera back from Clint and here is my story (no need to repeat the bit about the good looks and rugged appearance as it has been mentioned):

I use action cams for what they are intended: action sports! My sport is off-road bikes/quads. Buying my first camera I had several considerations prior to buying, at the time the Contour HD won the toss, rather than the GoPro. The reason the Contour won was that it had a slider that activated the recording. This is easier to find than a button and the biggest advantage is that there is no guessing! Slider in the front means it is recording. Pressing a button, and not knowing if it’s actually activated the recording is very frustrating. Often I have to stop, switch of the bike, wait till all other riders have passed me and then press the button again just to hear a very soft “beep” from inside the housing of my current “top” camera. The slider is a must for a helmet mounted cameras! VIRB gets another like!

My test was conducted mounting the VIRB next to one of my “top brands” and then compared the videos afterwards. As I do playback on big screen TVs, almost all the time, I select 1080 at 30fps. Even on the cameras that are capable of a higher frame rate, to me this works best, and the VIRB can record at this setting.

Having a built in screen: LIKE!Yes you can get screens for some other leading brands, but these are purchased separately and drains the already limited battery life. The VIRB’s screen hardly does anything to the battery and visible even in direct sunlight.

Video quality (selected for the test 1080 at 30fps) was at par with the best: LIKE!
I was not very optimistic because of the overcast conditions present when I tested the camera. None of the action cams do well in these conditions, even if the manufacturers state “great low light ability.” I mounted the VIRB next to one of my other “top” cameras and was pleasantly surprised. The image quality is at par with the “best” and virtually at any time in the video if I would pause, during play back, it would be a nice “crisp” image, especially for the low light conditions.

Additional Feature: LIKE!This camera has it all. GPS, accelerometer that indicates not only fore-aft, but also left-right acceleration and deceleration. Altimeter and compass, WiFi compatible with many devices like heart rate monitors for our fitness fanatics. RPM sensor that can connect to your bicycle’s pedals and many more. With these additional gadgets one now has a camera that truly compliments many different activities.
See photo for some examples of different “dashboards” that are available!Editing software: LIKE!

Not only does Garmin have these extras, but they can also be superimposed on the editing software. This makes for truly great videos as you can see your true speed, heart rate and much more as it changes. There are several overlays for the different sport lovers and athletes. This allows you to customise the video for your sport before the final video is composed. This editing software at present is limited regarding text and transitions, but I am confident that Garmin will soon include these features in an update. The editing program is however very simple to use and would probably be sufficient for a lot of people.

I took some “stills” at 8MP (12MP and 16MP also available) and again very impressed as it was still overcast and “small” cameras want sunlight!Still photos in overcast conditions, crisp and clear:

This is a great feature for guys like myself. The camera is mounted on my helmet and if I want to do any changes or settings then I would normally have to take my helmet off. With the VIRB’s easy quick release bracket this is no longer needed. Just press in the front, lift the camera, and it is in your hands ready to use or adjust as required. Yes, most cameras can clip from their mounting pads, but not remotely as easy as the VIRB.Battery Life: SUPER LIKE!This, to me, is surely the highlight of this action cam. As the VIRB’s image is at par, and she has many extra features to enhance your videos, it also has a stunning 2000ma battery that can supply up to three hours of video at full HD (1080 at 30fps)! This compared to its rivals is to say the least “wow!” Often my rides are more than five to six hours. This means that I have to switch the camera off to conserve battery life and cannot leave home without spare batteries. This single battery gives you more recording time than a Hero3 with three batteries. The camera also goes into a standby mode if not used for while. If you then slide the slider forward it automatically powers up and starts recording (takes about 10 seconds to fire up and start recording) with this feature it would be possible to go the whole day and take your selective shots as the day/event progresses.

Apart from the initial software updating issues and the booklet this is a great camera. It is loaded with more features than any action camera I know; and the only camera with a battery life that compliments my sport. It looks good, takes great video and is simple to operate! For a first generation, it surely is a bang of an entry for Garmin into the action cam market!See for yourself:

We posted a video with our findings on OutdoorUAE’s web page. Go to www.outdooruae.com for our video review and some videos, all taken with the VIRB elite action camera from Garmin!

Ride safe and go for gold,