Hiking: The Highest Points in the UAE

Making lists, ticking challenges, collecting race medals and bagging peaks are all things that adventurers and particularly hikers or mountaineers do quite regularly. There are seven continents in the world and climbers like to stand on top of the highest mountain of each continent and complete what is known as the Seven Summits. There are around 196 countries in the world if you include Taiwan. Each of these countries has a highest point or mountain. That is a big list to complete. For those of you who like facts here is another list:

What is a mountain?

In the United Kingdom, the government has decided that a mountain is a peak over 600m. This is to define freedom of access. Mountaineers have further classified mountains of a certain height with different names. For example any mountain above 914m is called a munro. To those using the metric system, 914m could be a strange point to pick until we look at the imperial equivalent of 3,000ft which is slightly more rounded. The term was created by Sir Hugh Munro and was originally only applied to Scottish mountains meeting the height criteria. Such is the fervour and fanaticism of mountaineers that the trend soon caught on and they created terms for all their mountains of a particular height. There is no official reward for climbing all or any of the Munros, Corbetts, Donalds, Grahams, Murdos, Wainwrights, Birketts – only personal achievement. However many spend a lifetime trying to stand on the summit of each if only for a brief moment.

In the UAE there are no names yet for our mountains. But here is a list of some of the highest so that when there is a name, you can claim to have done them.

Highest point in the UAE 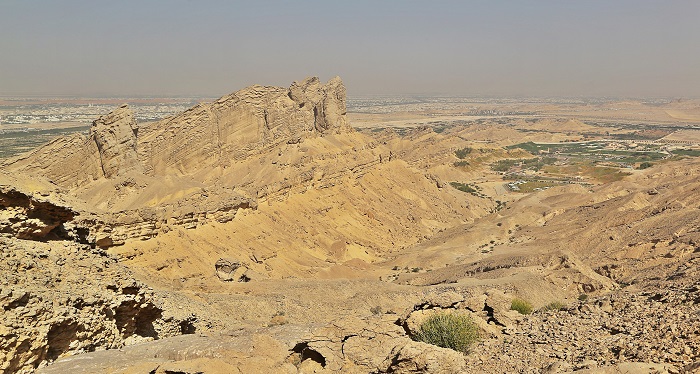 Below is a list of the highest points in the UAE with the GPS reference. Many do not have paths to the summit so using software like Google Earth is an ideal way to plot a route. Alternatively, you can contact OutdoorArabia and join one of their guided hikes to the summits.

The region and its mountains

Many people only envisage the UAE as a flat desert and gleaming new cities. In fact, the mountains are of worldwide significance. Known as the Al Hajar Mountains, translated in Arabic as stone mountains, the range runs from northeastern Oman through the eastern United Arab Emirates and down into southern Oman. Although there are no official tourist hiking trails in the UAE, The Ministry of Tourism in Oman has developed a wonderful set of 11 marked trails, grading them from Grade 1 to 3 with hiking time anywhere between 1.5 hours to 18 hours. The highest point in Oman is Jebel Shams, meaning mountain of the sun and is just over 3,000m.

In the UAE, the Al Hajar range separates the Al Batinah coast from the rest of the UAE. You would be mistaken for thinking Ras Al Khaimah is the most mountainous emirate but in fact, Fujairah can claim to have many more peaks, although not quite as high. In many places such as Dibba, Kalba and Khor Fakkan, the mountain slopes run directly down to the shore. The emirate of Fujairah was the first to create a decree by His Highness Sheikh Hamad Bin Mohammad Al Sharqi, Member of the Supreme Council and Ruler of Fujairah protecting Wadi Wurayah and it is now the UAE’s first protected mountain area. The wadi is a 129km protected nature conservation area that due to its permanent water resources has been used by local communities for thousands of years. It is home to rare and endangered species such as the Arabian Tahr and Arabian Leopard which are vital to the UAE’s national heritage.

The Hajar Mountains extend into Musandam and the landscape is a sharp contrast of sea and mountain. Jebel Harim is the highest point in the north at a height of 2,000m. This area is known locally as the Ru’us Al-Jibal, which literally means “heads of the mountains”.

Geographically, these mountains are of special interest to geologists because they consist of the world’s most extensive surface exposure of ophiolites. Many years ago the surface here lay much further north and now this rich seam of igneous and sedimentary rock is very visible, displaying obvious movement of the mantle and oceanic crust. These are the beginnings of the Mesozoic carbonates of the Arabian Platform which further west bear the oil that drive the region.

Jebel Hafeet is worth a mention although not the highest, it is definitely one of the most beautiful and gentle introductions to hiking in the region. You can actually drive very close to the summit of Jebel Hafeet in Al Ain but a good hike is detailed below. The mountain road curves gradually up 12km to overlook the desert and at nearly 1,250m the view on a clear day is both over the desert and the city of Al Ain.

Jebel Hafeet is outstanding because of its isolation and easy accessibility. In addition to hikes around the slopes there is an extensive cave system that apparently opens up into the Royal Palace on the top. At the bottom, the Green Mubazarrah is a busy area of hot-water springs, streams and lake as well as the nearby Wadi Adventure.

All of the data regarding the mountains in the UAE has been compiled from a number of sources including Peakery and Geonames. If you have further information, we would like to keep it updated, so please contact us.

A hike for April

This hike takes you to the beautiful area around Al Ain and up the slopes of Jebel Hafeet. The hike is relatively short; around four slow hours and the views open up to show the desert and the green oasis of Al Ain.