Activity and GPS route tracking on your wrist

We got our hands on the brand-new Casio ProTrek F30 for review which is the third generation of the F-series smart watch. First off, if you consider buying a Casio, you are looking for a big watch so the point of size that we read in many other reviews is in our opinion not relevant. Our main focus in this review is the GPS. Because often, this technology requires a smartphone or a dedicated device – both of which are more cumbersome. 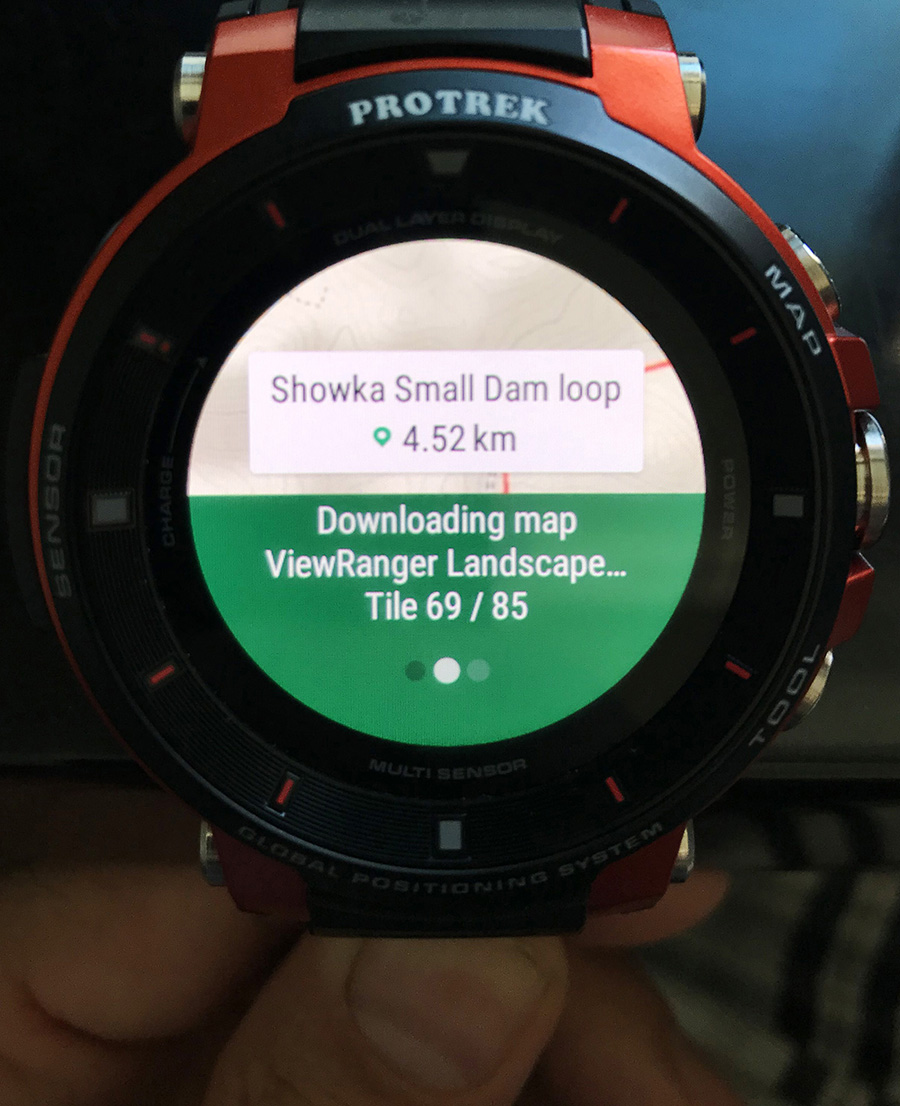 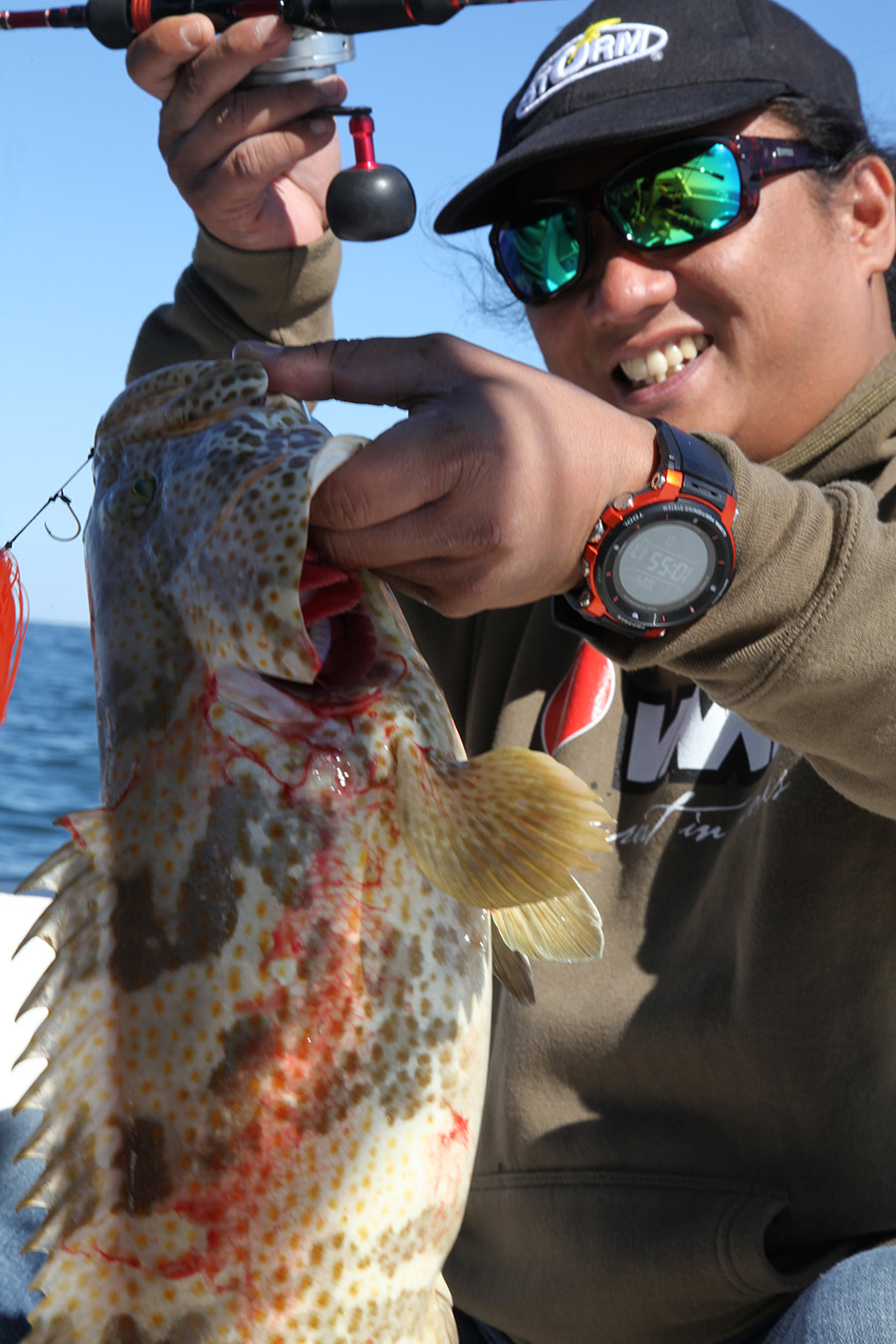 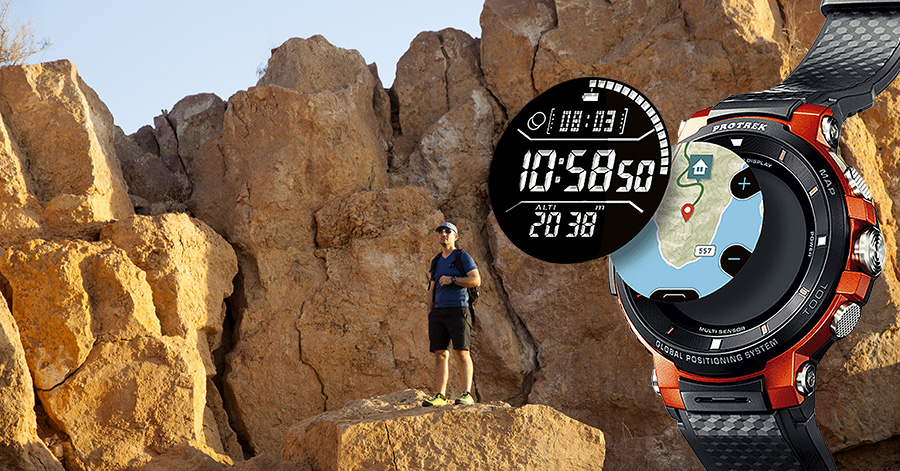 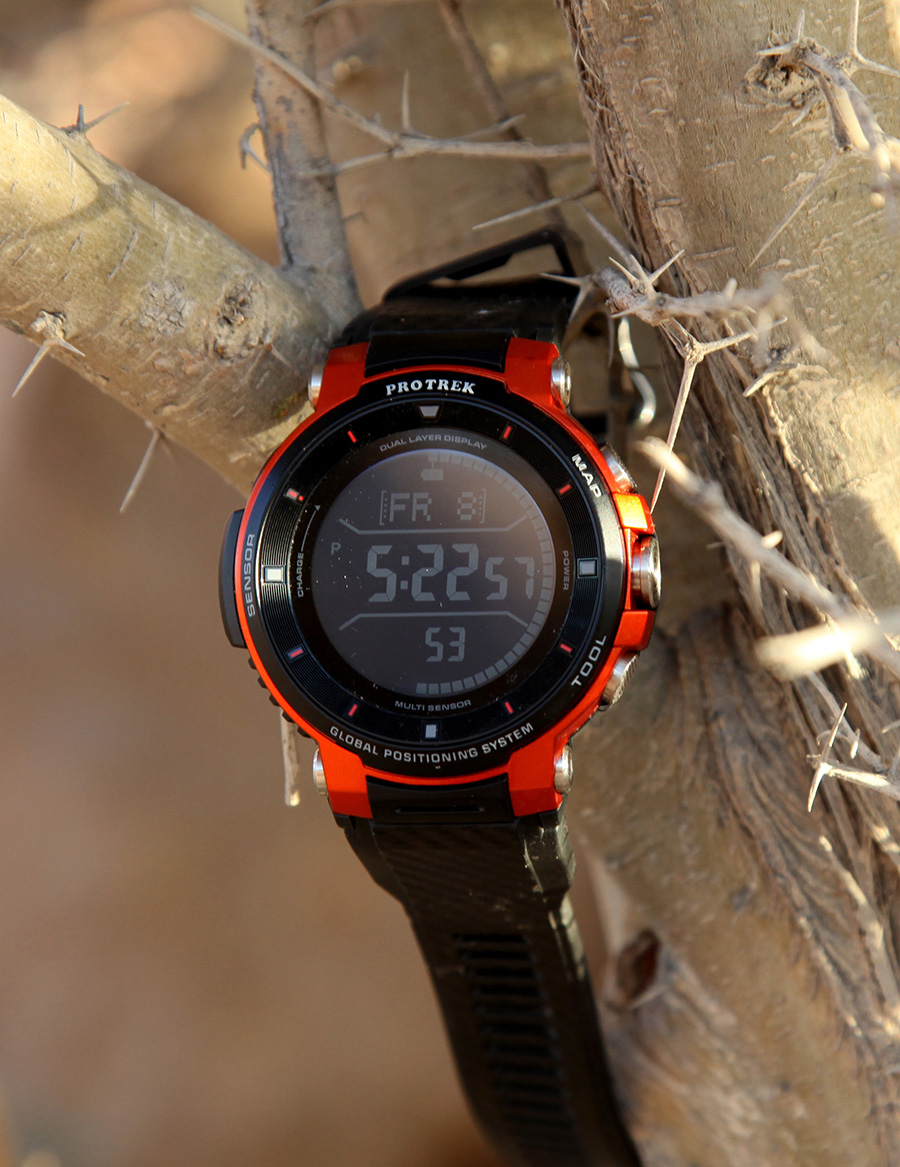 This comparison alone is impressive if you think what features Casio managed to put inside this tiny device. Especially in the outdoors, you don’t want to carry too much or too heavy so substituting a GPS device with a watch which weighs less than 100g is an amazing idea.

The F30 is a smartwatch with a clear focus on functionality but the focus is still wide enough to appeal to a wide range of outdoor enthusiasts covering many activities or for the wannabe weekend warriors who will buy the watch for its looks. The F30 keeps its promises and is built according to military standards. It will withstand some abuse like dust, drops and a deep dive with up to 50m water resistance.

A Casio watch is usually a bold statement on your wrist and the F30 a clear sign that its owner loves adventures and an active lifestyle. The watch looks great and the large buttons are easy to find; they are also very responsive – as it uses Google’s Watch OS operating system.

The same applies for the other sensor functions like the compass, altimeter and barometer, all are intuitive and very accurate. The WSD-F30 has a 1.2-inch OLED for smart functions, and a second 1.2-inch monochrome screen for the Multi-Timepiece mode (battery-saving mode).

Both screens are easy to read even in bright sunlight and with a resolution of 390×390 pixels there is enough map detail for navigation. The touch screen is accurate. There are some power saving modes to extend the battery life. For example, it turns off the GPS which drains the battery quickly. In power-saving mode, the watch last for almost a month if everything is turned on (incl. use of Bluetooth and Wi-Fi). During normal use, the watch will last one to 1.5 days before you need to recharge. There is a very smart feature called Extended Mode where you can schedule for up to 3 days when certain functions like the GPS are deactivated to not drain battery such as at night when you’re sleeping.

Google Maps is displayed when working online, while Mapbox supplies offline maps. You can download and store up to five on the watch.

The area can be specified with a maximum size of around 50km. By selecting smaller areas, detail is increased. With the built-in features, you can only track routes and save them (also exporting to your Google account as a KML file is possible) or use point to navigation (only indicates distance and direction to a set location) but you cannot load tracks directly to the watch.

You are able to set markers along the route and record voice notes which comes in pretty handy for route tracking. The built-in tracking functions cover trekking, paddle, fishing, snow and cycling, all with some customized layouts and functions.

To be able to use the watch to its full potential you need to download and install third-party apps like “View Ranger” which we have used for our test and which works great with the watch. Some apps are not available for the watch and others don’t work well.

You are also not limited to existing routes, you are also able to upload your own routes; some of which you may find on the OutdoorUAE website or from friends. With those apps, you get full route guidance.

There is an endless list of apps on the PlayStore so you can personalize the functions of your watch to your needs. In terms of fitness features, apart from a heart rate monitor, the F30 offers all of what other competing watches have.

The watch has multiple settings for various activities. The cycling setting is great to track your route, check your speed and distance – more or less the functions you get from a bike computer. For fishing it shows you the phases of the moon as well as fishing prediction. And with the click of a button, you can lock-in your GPS location when you catch a fish.

Wear OS is available for iPhone so you are not limited to Android phones and we were testing it in combination with an iPhone 6s which worked perfectly. For the pairing we had to reset the watch to be able to connect to the iPhone which is easy and straightforward when you setup it up. Not being an expert in smart watches and a bit old school, I also did not know that using a phone is essential to access all the features. Without a phone you are not even able to connect to Wi-Fi for the first time since you cannot enter the password on the watch. But I guess all smartwatches have to be linked with a smartphone. This comes of course with convenient features such as receiving notifications from incoming messages or calls on your watch. Once the watch is fully setup there are many features you can use without the need of the phone.

If you are on a budget and after the main features, you can get its predecessor – the F20 which is still in retail. It’s a bit bigger, has less display resolution and is not as visible as the F30 in bright light and reacts slower in smart mode.

In comparison to a handheld GPS the watch can substitute it but only if you use additional apps. It’s also not possible (or we did not find the right app) to load Google Earth images on the watch to use for (offline) outdoor navigation. This might be a feature for the next generation as well as solar charging capability to extend battery life outdoors.

So even if the F30 is a bit pricey you get a lot in a small watch and most people will certainly not use the watch to its full potential. Even after testing the watch for a week, we discovered new features every time we tried it for a new activity. We were pretty impressed with the watch and believe that Casio set the bar high with their outdoor masterpiece. ■

We all know about HERO5 Black and HERO5 Session. People loved the redesign and the new added functionalities. GoPro has come with its all new HERO6 Black which fills in the gaps which HERO5 lacked to do. The HERO 6...
Read More

Unveiled its first-class products at DIBS 2017 For the 14th year in a row, Al Yousuf Motors returned to the Dubai International Boat Show with a collection of astonishing wave runners and sports boats. For more than 50...
Read More

Columbia introducing the OutDry™ Extreme ECO Shell Some might think a jacket is not of importance if you live in the Middle East. But when you want to enjoy the outdoors, especially in the winter season, you are going...
Read More

Inspiring Women of the Outdoors

Magazines and newspapers are filled with incredible and inspiring stories of people who achieved things that others have never done before or even overcome hurdles which were deemed before impossible. As much as this...
Read More

Interview with a Mountain Runner