Skateboarding in the UAE 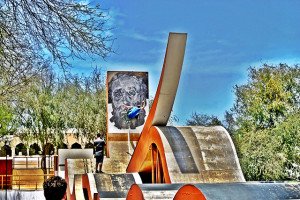 Skateboarding in the UAE is a lot like Dubai itself– sometimes glamorous, always cosmopolitan and most assuredly dynamic.

From rolling with royalty like the Ruler of Dubai’s niece at Tashkeel, an artist’s enclave with a skate ramp in the shape of its Arabic namesake, to rubbing elbows with celebrity action hero Tony Hawk under the canopy of the billowy ghaf trees in the adjacent wooden bowl, UAE’s skate scene is bringing in the big names and the glam that goes with it.

All royalties and celebrities aside, the cosmopolitan aspects of the local skate landscape – evident throughout the Emirates – is best exemplified with a recent session at Al Ain’s Town Square where the marble is so smooth it casts a reflection. As the minarets of the Sheikha Salama mosque rang out with the evening call to prayer over the square, I counted six different nationalities on- board at the plaza: Serbian, Bangladeshi, Syrian, Filipino, Emirati and me, Texan. Amidst this cacophony of languages and cultures, I realised we all had one thing in common – our love of skateboarding. 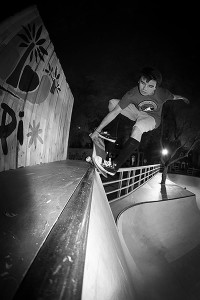 This love of skateboarding has played a major part in the dynamics of the scene from the beginning – and while certainly past their prime, the old concrete half-pipes at the lushly landscaped Al Mamzar Beach Park and the Abu Dhabi Corniche Skatepark, have certainly paved the way for the relatively recent wooden additions of Hayya Springs, Al Tashkeel and the indoor bowl above Rage skate shop in the Dubai Mall.

With the best selling boards sales growing by 40% between 2012-2013 (according to Rage founder Shahriar Khodjasteh) and private concrete bowls and prefab skateparks popping up at the American University of Sharjah and Arabian Ranches, it’s no wonder local skaters are clamouring with petitions for more public, skate-able terrain. 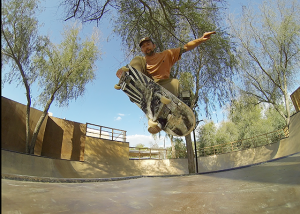 Given the clamour, the glamour and the dynamically cosmopolitan nature of the skate scene in the UAE (not to mention the support of celebrities and the royal family), the future is exactly how skateboarders see the urban jungle around them – open to interpretation. From now until then, here’s a short list of where to get your skate-on.

Tashkeel
Leave it to Dubai (actually Ohio son Bradly Kirr) to create a skatepark inspired by the curves and flourishes of the Arabic alphabet – in this case with the Arabic word Tashkeel which translates artistically as a structure around which one creates (with a skateboard, of course). Expect expats, Emiratis and the occasional princess to show up for a session on the art ramp or under the dabbled shade of the ghaf trees in the wooden bowl. Other such acts of artistic cross-pollination can be found inside where studios for printmaking, photography, textiles and fine arts surround a gallery that hold the expressions of a new generation. Feel free to skate, hang out with the artists and browse the exhibitions. Skateboarding lessons available on request: 8:00am – 10:00pm, Saturday to Thursday. 04 336 3313; tashkeel@tashkeel.org

Rage Bowl
The only indoor skateboarding option currently available in the UAE, the Rage Bowl is the go-to spot for those rare rainy days of winter and dog days of summer when the temperature tops out at the boiling point. Get kitted up with a complete skateboard for 375 AED, book a lesson and get carving in the bowl above the shop in the Dubai Mall. Curious onlookers, guaranteed. 25 AED for a two-hour pass. Sunday to Wednesday. 10am -10pm; Thursday – Saturday 10am – 12pm; Sunday to Wednesday 6-8pm, free! 04 434 1549; www.rage-shop.com

Abu Dhabi Skatepark
Even with the ledges, grind rails, quarter pipes, hips and fly-outs, the corniche skatepark in Abu Dhabi is laid out more for BMX and inline skating than skateboarding. Nevertheless, local rippers like Mark Issa and his crew have, even with less than stellar facilities, managed to carve out a skate scene of local talent who’ve got the park and the street spots along the seaside promenade dialed-in. Sunrise till the lights go off, free entrance. 02 401 2066

Hayya Springs
With the glittering Dubai skyline in the distance, the Springs is a fun little skatepark not far from the Burj Al Arab. It sports a 6ft tall, blue wooden half-pipe with hips on either side that connect you to the fun boxes, quarter pipes and grind rails strewn about to maximise flow. The strategically placed date palm trees are evocative of where you are but aside from that (and the multi-cultural bunch of grommets you’re likely to skate with), this park could just as easily be in California as the Arabian Peninsula. Open 6am-10pm daily. 15 AED entry fee. 04 362 7787