Wadi Bih is famous for two things: a relatively easy Solo 72km run and a Fun Team 72km Relay on the first weekend in February. This year I doubled up, running Friday’s Solo 72km and Saturday’s Team 72km Relay. Why? Harry, my boss, promised he’d run the Solo 72km when I did the Bahrain Ironman 70.3, so I had to run with him. I also promised my running buddy, Ramzi, that I’d run the 72km relay with him. Brilliant Idea #1.

The Weather
The day before the event, the organizers emailed everybody about the weather. Weather? C’mon, seriously? Ultrarunners always expect the unexpected, right? Thursday evening it was a balmy 27C and sunny –so I didn’t bother reading the details. Oops. Brilliant Idea #2. When we gathered for the start at 04:30am, it was dark and quite cold (10C) at sea level. Even though the organizers warned us and predicted it was going to be 10C colder at the top of the climb after 30km, I scoffed at that ridiculous notion and wore my Luna sandals – Brilliant Idea #3. Can you see how my brilliant Ideas can compound exponentially into sticky situations? 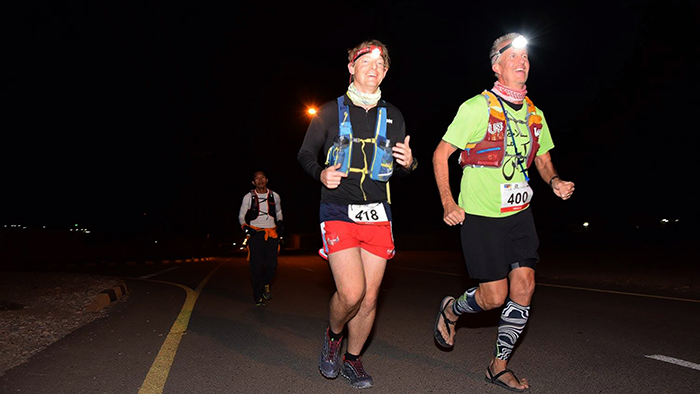 Harry’s Payback for my Bahrain 70.3 Ironman
Wadi Bih is Harry’s first ultramarathon, which he agreed to run after he coerced me to try that Half Ironman in Bahrain. Harry and I stayed together for the first half to keep each other in check. At CP9, we shared our favourite Salt and Vinegar Pringles. At the turnaround, Harry smiles and says he’s gonna stretch his legs a little. Apparently that means he wants to blast down every hill with reckless abandon. He crushes it, and I don’t see Harry again until I finish and he has already showered and changed into warm clothes. 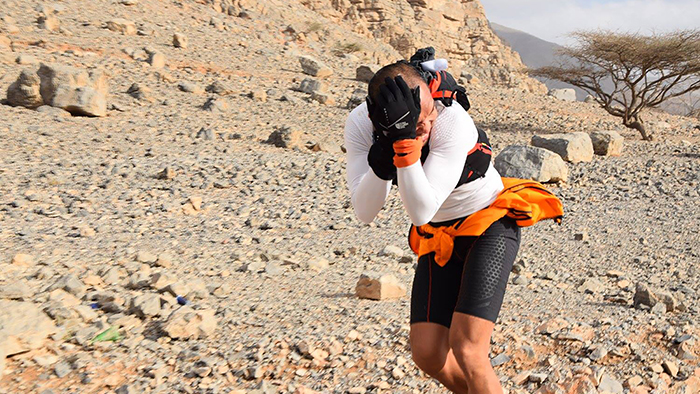 Mike On – a top FRU Ironman
When you run in the darkness with a head torch, it’s easy to sense when you’re being stalked. Mike’s head torch was lighting the path where Harry and I were running – it felt like he was drafting, but the gusts were swirling around from all directions. After 10km, Mike picked up his pace and disappeared in the darkness. He finished with a fantastic time of 8:22, and a great photo of him covering his face on the mountain: Mike’s hands are covering his eyes from flying dirt, sand and debris but he is still running hard into the wind!

Steve – some guy I ran with from 15km to the turnaround
Steve caught me around sunrise. This was his first ultra and we chatted together for over 20km. When we hit our dropbags at CP9, my hands were shaking from the cold and I’m still grateful I scrounged (stole?) a pair of gloves off him – thanks, but they didn’t quite make it back so I owe you. Remember Steve, what is said on the trails, stays on the trails! 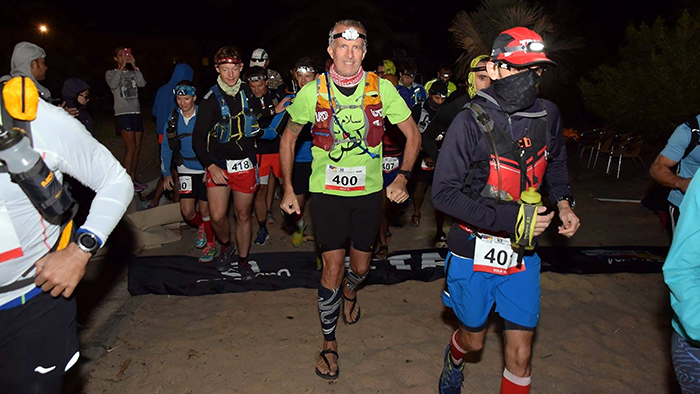 Chris Queen
Chris is a solid DTR runner who seemed a bit nervous at the Start, probably a combination of nerves and freezing temperatures. Steve and I caught Chris at 28km, something that surprised me so we stopped to see what was going on or if he needed some nutrition. Chris said he was cramped up and was struggling. After the turnaround, I was relieved when I saw how Chris was running better. About 10km later, I heard somebody blasting down the trail behind me: it was Chris! As Chris sailed by, he said he caught his second wind … I assume that was a little British irony, but he crushed it! 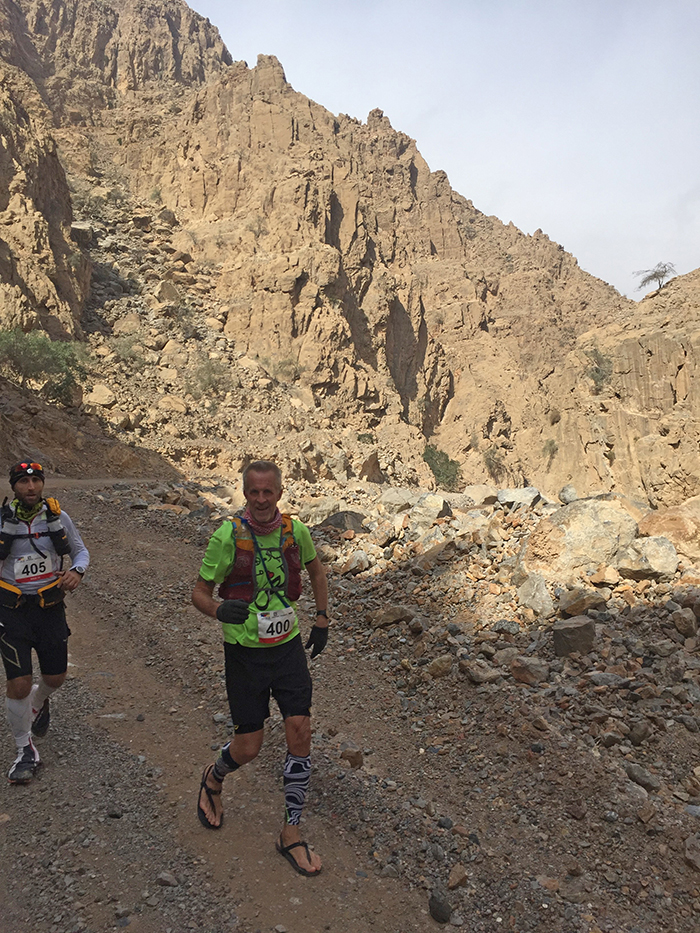 Sam in Training for MdS
Sam is preparing for Marathon des Sables, so he wore his full MdS kit at Wadi Bih. Sam started out ahead, and we ran together on and off after CP9. After 50km, Sam and I were out there essentially by ourselves in the nasty rain. We ran and walked past each other throughout the last few hours – both of us pushing each other to keep each other going to finish virtually together. 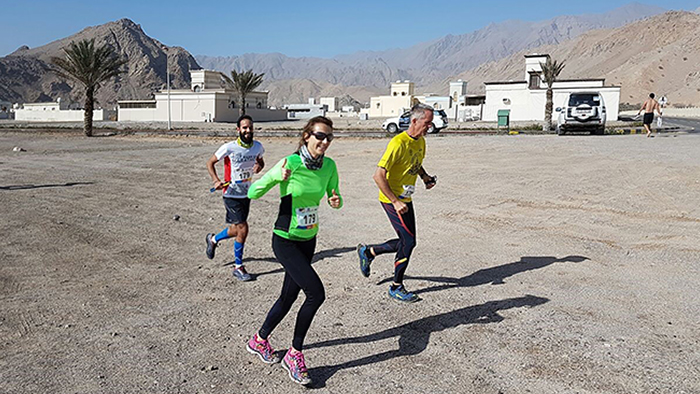 The Crew
My running buddy, Ramzi, and my wife, Olga, were crewing – which meant they were driving the Solo72km route ensuring everybody was ok and taking some photos. Mostly I thought they were amused by how nasty the weather was and how the runners embraced it. When it started to snow, I asked Ramzi to get out of the car to confirm whether it was snowing or I was hallucinating. Ramzi stepped out, and when he stopped laughing at me for running in sandals in a hurricane, he confirmed that I was running in sandals in a hurricane while it was snowing!

Two mysterious runners
At 66km, a woman was running well and closing the gap behind me. As we were slogging through the snow, she managed to go from 500 meters behind me to only 5 meters by 68km. When I looked back at 69km, she had dropped out of the race, with only 3km to go. Another runner was stopped at 70km and sat down in the car with Ramzi for ten minutes. The guy said he was sleepy. He got out of the car and couldn’t move. Both runners were fighting the cold rain and wind for almost ten hours – stopping was a tough decision. 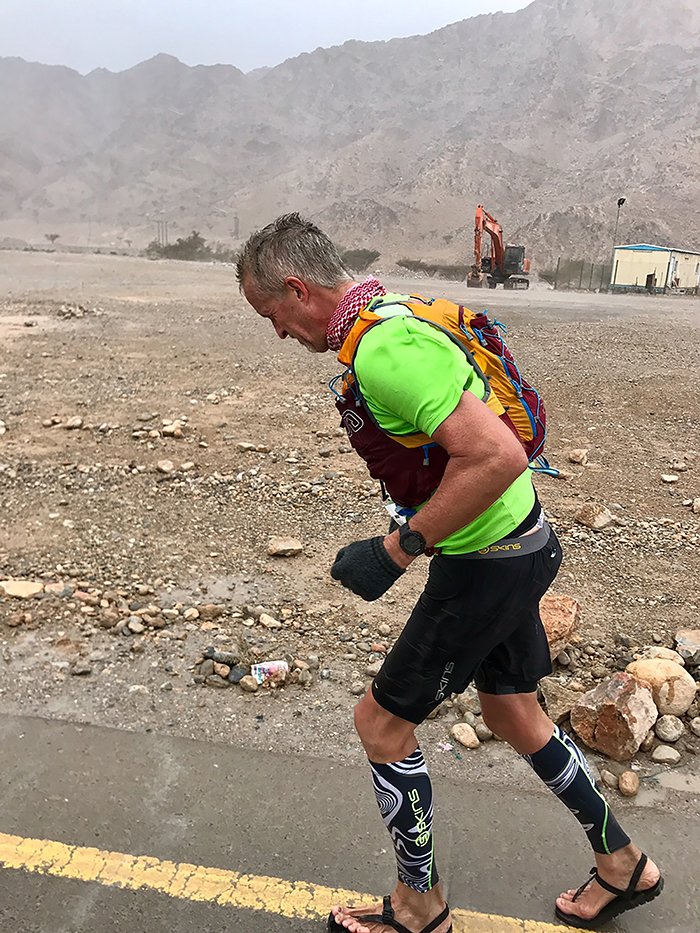 Finishing
The last six hours were quite painful for me, as my feet and ankles felt every step in my sandals. When it started to snow at 65km, I was suffering a bit from numb feet and frozen hands but managed to pick up the pace when I heard the organizers – correctly! – were pulling runners off the course because of the risk of hypothermia. I eventually finish in 10:06 and before they gave me my Finishers medal, somebody put a hot, hot towel on my head, because my face was a deep blue. Twenty runners were plucked off the mountain during the storm. 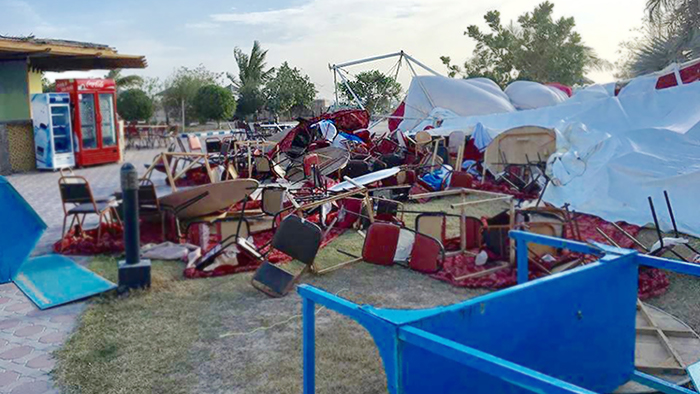 The Aftermath
When I finished, the area behind the hotel looked like it was hit by a hurricane. Why? Because the area behind the hotel was hit by a freaking hurricane! Chairs and tables were knocked around. Tents were scattered around the hotel grounds, with two floating in the Indian Ocean! We stayed overnight in the hotel, because Saturday morning, Ramzi, Olga and I were running the Team 72km Relay with another guy from work (Zaid), along with two other teams of five runners from our office. 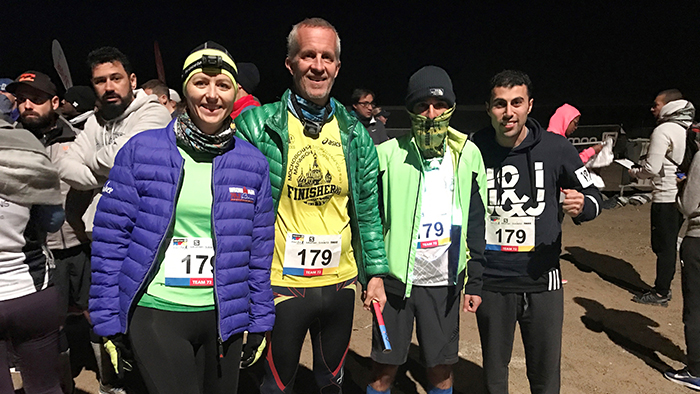 Team 72km Relay
The Saturday Team 72km Relay crowd is the polar opposite of the Solo runners, and fortunately for everybody, Saturday’s weather is perfect for the team runners: warm, sunny and no wind! Nonetheless, the organizers had to change the course because the road through the wadi washed out after Friday’s storm. The course turned at CP4 to up and over a hill to Zighy Bay, which was a welcome reprieve from that mountain we faced on the Solo 72km. Also, the new course meant the teams had to run in pairs – which makes the running much more interesting, but unfortunately reduced the recovery time between runs. For me, the best decision I made was to ditch the sandals and wear my running shoes!

Relay Running
The Relay team runs the first leg all together, then Ramzi and Olga ran the next two legs through the village and over the dam. Zaid and I took the next leg – ouch! After running 72km on Friday, I found that the first 100 meters of each relay leg was extremely painful before I was able to find some rhythm and run. We switched around on the legs, but somehow I had the honours of running back-to-back legs, and running to and from Zighy Bay with Ramzi. The hill was a bit tough but we were rewarded with a stunning view of the Indian Ocean on a sunny day!

Jeremy Curran
Jeremy Curran is a beast and set a course record. I saw Jeremy twice at Wadi Bih. First, when he took off at the Start as if he was racing 5km. Then when I was putting on the gloves I nicked from Steve around 27km, Jeremy is flying back at his 45km! I was frozen and numb, but Jeremy was sweating in his tank top and short shorts. I cannot fathom how Jeremy ran that 72km in 5:28 – that’s 4:33/km pace! How did he sprint up that mountain? Didn’t he notice the wind? He was so fast that he finished in time to have breakfast at the hotel with my crew! Unfortunately for Jeremy, he ran so fast that he didn’t take full advantage of the Wadi Bih experience: Sam and I ran the last 7km in snow! Jeremy, next year if you train better maybe you can run Wadi Bih with me and Sam in snow…