A tale of two runners 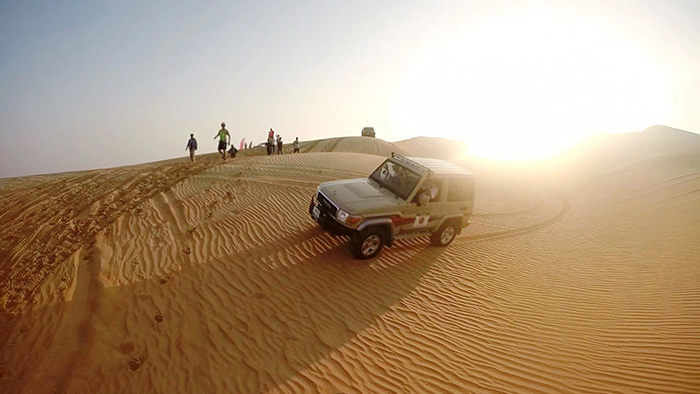 Dubai Offroaders
Dubai Offroaders is a club of adventurers that brings spirit to the runners as well as handling checkpoints, water and safety. Because of the remoteness of the desert, everybody gathers the night before and camps out under the stars. Distinguishing Offroaders from Runners is easy: Offroaders have lots of fancy camping gear like tents, while Runners sleep directly on the sand. 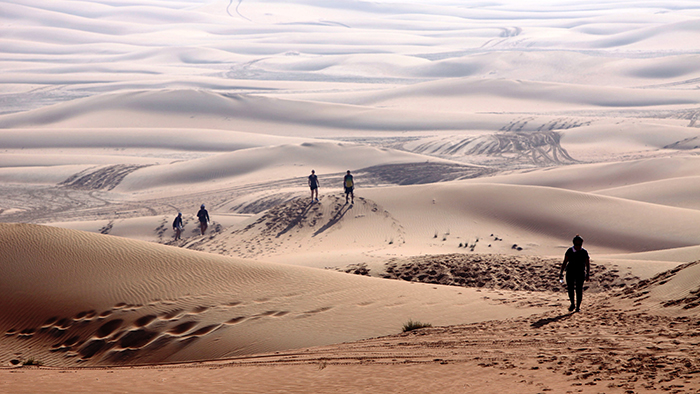 Runners & Sand
About 75 runners showed up for the various distances in an informal ‘fun run’ approach. As we climbed over the first sand dune, I spotted a 4X4 getting pulled out of deep sand with a winch –making me smile and showing how serious this course is. If you aren’t a runner, you may not understand the feeling of running in the desert. You do not run up sand dunes – it is counterproductive. You walk up sand dunes, like going up stairs where you must lift your knees very high, or you make no forward progress. If you stand still on a steep sand dune, you slide down. You must keep your feet moving, until you get to the top – then you glide down, with sand flying all around. 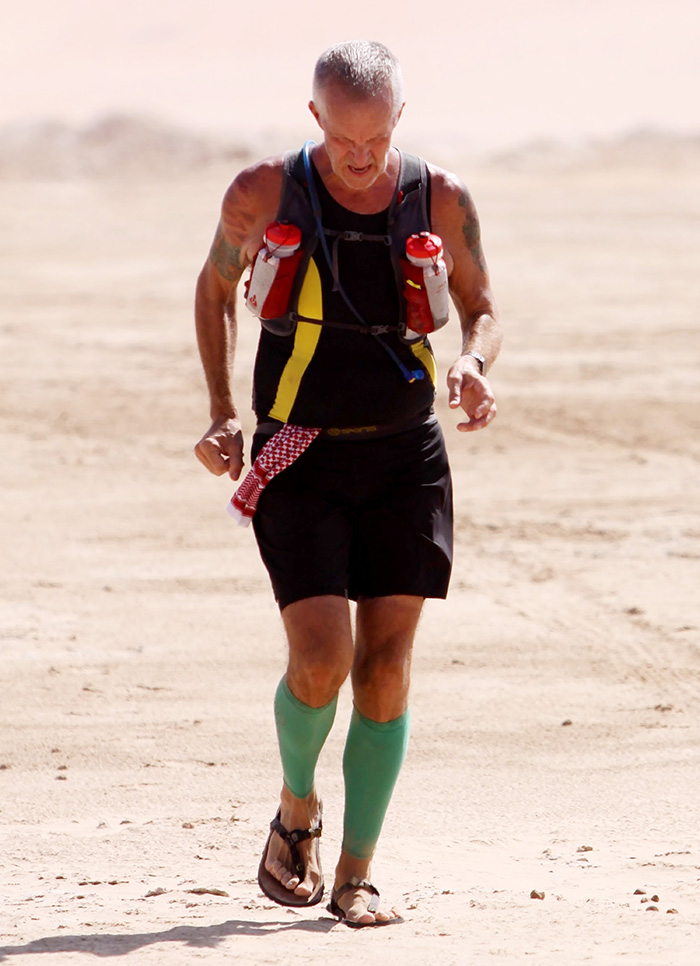 Salt Flats
In contrast, running on salt flats is like running on … salt flats. I haven’t figured out a good metaphor, but every step crunches on salt and the top layer is crusty, but soft underneath. There are not many salt flats around, so it was a new sensation to me; a surface with no good traction. The landscape looked like the surface of the moon. It was an endless expanse, with one saving grace: Dubai Offroaders parked at checkpoints every 2km or so. What a great feeling when you see those 4X4’s in the distance, knowing that there are enthusiastic people waiting with water and words of encouragement! 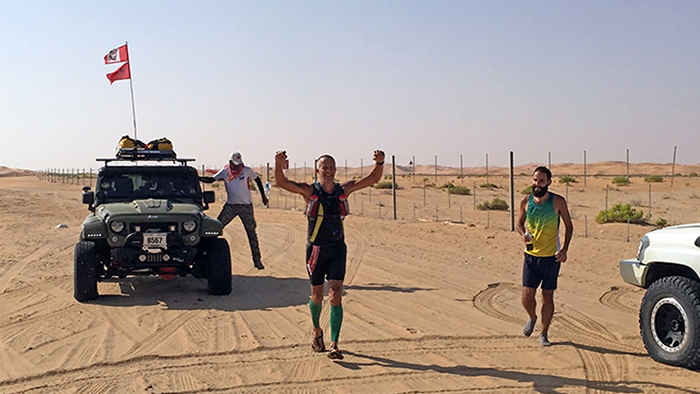 Cramps!
I love running, because success results from training and mental toughness. Running is easy until it gets really hard, especially when the proverbial dark side of the moon sets in. Earlier in October I slogged through a Himalayan blizzard above 5,400 meters at noon – the antithesis of what I experienced at noon in the desert during the Tropic of Cancer Ultra, where it is over 40C and sunny. I climbed along the ridge line of big dunes until my legs cramped. Cramps are debilitating and painful, causing me to worry about plummeting off the ridge. I did not fear the fall, but I dreaded starting the climb again from the bottom. As I struggled over the ridge, two runners passed me. Oh well – deal with yourself and don’t worry about them. 25km done, and 25km to go. 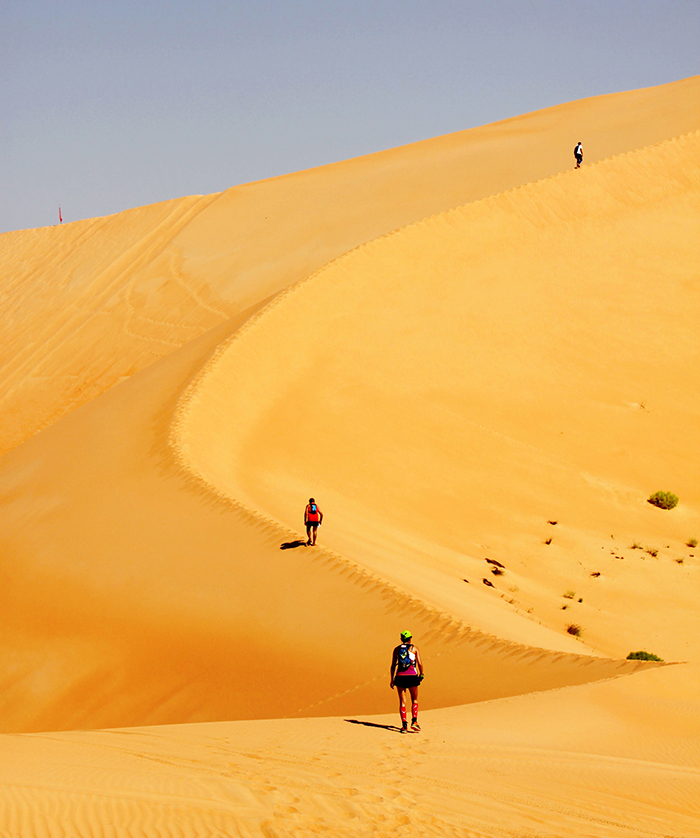 Cat and Mouse
A cat and mouse game ensued with me and two other runners. We ran slowly and walked fast, frequently passing each other. At checkpoints, Dubai Offroaders were simply glorious, despite the fact that I was a mess, with sweat and stink emanating from me. They provided water and their 4X4’s became beacons along the way, breaking the distance into smaller manageable chunks. At 35km, two runners ahead of me dropped out, which motivated me to push a little harder. The third runner continued playing cat and mouse until he dropped out at around 38km. 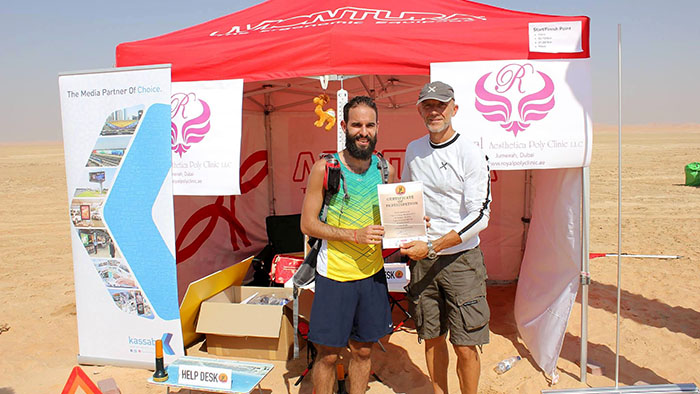 Convergence of Trail Runners and Offroaders
Max played a cruel joke on the route, making the last 12km through deep, soft sand which was virtually impossible to run on after six hours. The temperature hit 42C, but I noticed the heat only on my feet, because I run in Luna sandals and the hot sand burns the bottom of my toes. With water and cheers from Dubai Offroaders, my cramps dissipated and eventually, I finished 50km. Max succeeded in creating an epic desert challenge bringing together trail runners and offroaders! Big shout-out to Albert, Ajay and Pari from Dubai Offroaders! Awesome!

At “0-dark-30” the Tropic of Cancer Marathon base camp was awake and silently in full swing as participants and support teams of the inaugural TOCM were making their final preparations before the race start. Actually, to call it a race is not correct. 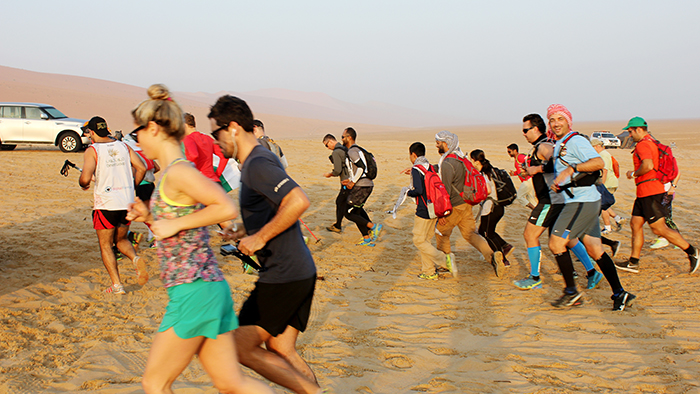 The event, organised by the famous extreme desert explorer Max Calderan, was a family, friendly event open to all outdoor enthusiasts and desert lovers irrespective of running ability. In fact, it could be argued that you need to be more of a stamina walker than a runner as much of the ascents and descents were done in walking mode rather than running mode.

There were about 70-80 participants who were supported by 18 4x4s driven by offroad driving experts from Dubai Offroaders. The DO team was phenomenal in providing the participants the much needed guidance, water, and general moral support. Hats off to our DO offroaders for their efforts; thank you! DO’s sister club, Adventure Emarat, fielded a strong team of event participants as well with over a dozen ladies and gents who came out to the desert, some for the very first time, to partake in this one-of-a-kind event. 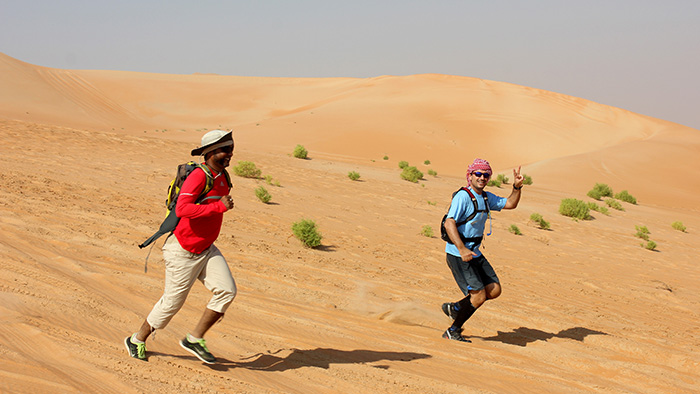 The course was rather straight forward with only a few distinct lines of travel as the crow flies. However, on the ground, those lines had participants zig-zagging, climbing, descending, walking, and sometimes crawling through some of the most challenging desert terrain. Runners had to shift gears from a steep climb to a steep descent in a matter of seconds then shift to cruising mode on long stretches of sabkha salt flats. The majority of the participants ran the 10km, with less running the 21km, and only a handful running the 42km and 50km. One thing is for sure, it is fair to say that the difficulty and challenge of the terrain caught most runners off guard. You cannot appreciate how difficult this is until you actually try it for the first time. From the start line we had a steep ascent on soft sand, which saw us crest the top with an immediate descent, then ascent, then descent…you get the picture. It was one dune after another of what became softer and softer sand. 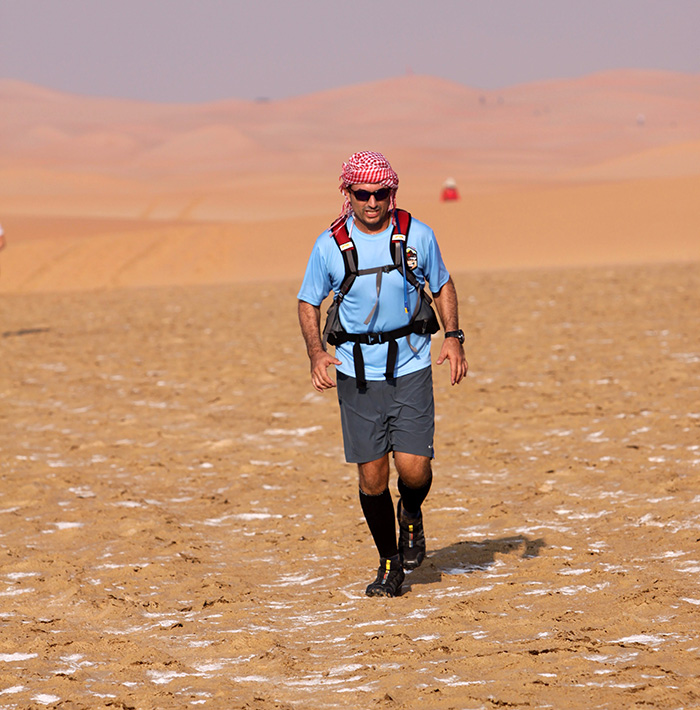 This was my first time running a desert, offroad run. I learned quickly that you get no credit for the energy exerted to go vertically up and down the dunes in relation to the distance you need to cover. Had you exerted that same energy on a flat surface, the distance travelled would have been a lot further. This was a bit of a mental dilemma I needed to deal with quickly to have any hope of completing the course. It was a mind-over-body scenario and I had to push the mental stamina further than the physical stamina. There were a lot of smiling faces on the course, especially from the DO support crew; they really took it upon themselves to help lift our spirits during some difficult times. For me personally, I really warm up and get into the groove of any running event right around the 4 or 5km mark, and the TOCM was no different. As I approached the 5km mark I was greeted with a refreshing shower of cool water and this definitely helped recharge the drain on my legs. From that point it felt as if the race was much more manageable. 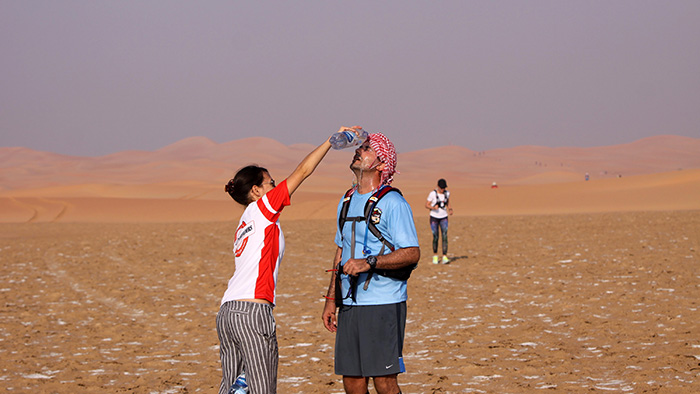 There is something very enjoyable for me about running by yourself out in the wild, whether it be the mountains, wadis, or desert, and it is that time I have with myself to ponder why I am doing what I am doing. I must say, it is most often a very difficult and somewhat painful experience so I always seem to convince myself that I enjoy the idea of setting a very difficult bar for myself to cross. It would always be much easier to give up, jump in a support car, or simply stop, but pushing on to reach over that bar is a great feeling of accomplishment and reminds you that challenges in life are not insurmountable. 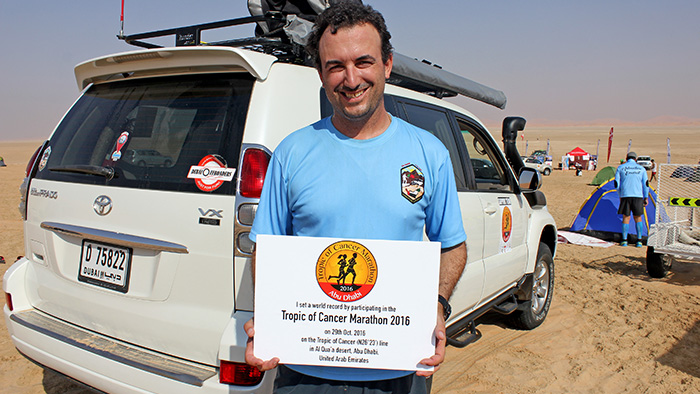 I made the final turn before the last set of dunes and was feeling pretty good. I knew that shortly the run would finish and I would have accomplished what I set out to do. I didn’t come first and I didn’t come last but none of that mattered. The best thing about the whole event was the whole event. I was surrounded by many of my good friends from Dubai Offroaders and many of my good friends from Adventure Emarat, plus new friends from the event itself. Every person that was on the sand that day contributed to make the event as great as it was. It was a huge accomplishment for everyone and gives us great memories and anticipation for the next one!