Oman Wadi trips: Patrice and Marcel back on (off) the road 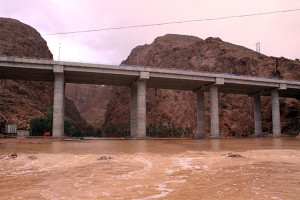 After nearly two year of silence, Patrice and Marcel are back in the pages of OutdoorUAE (after his featured Land Rover journey from Dubai to Belgium and back “Slow Lane to Nowhere”). Patrice has reluctantly jumped back in the business world, full of committed deliverables, deadlines and a lot of other awful words you don’t want to hear about. And Marcel is waiting patiently in the car for the weekend fun in the dunes and wadis. This month, he tells us about his drive in Oman in the three days of rain we had in November.

The first day was real madness: we left Dubai at 5:00 p.m. and took five hours to do Hatta-Sohar, crossing countless streams of water 60-80cm high with a current you cannot imagine. There were cars flooded everywhere, police stopping cars at every wadi (meaning every low point on the tar road) and all the villagers where out on the side of the highway watching, as it was the once-in-a-year attraction.

The villagers tricked me once and got me to test a water crossing (yes, yes, go, go, mafi mushkilla!). Of course, they were all watching for the car of the Dubai tourist to be washed away from the road. I didn’t give them that pleasure; the Patrol Safari is a bloody good car. However at some occasions, with an olive in the crack, I would have produced 3L of oil. Muscat was unreachable and we had to stay the rest of the night in Sohar.

On the second day, there was still water crossing the road in few low points, while the blue sky was clear from any dust, having been washed all night by incessant rain. Oman sky was offering that light that you can normally get only in Africa. Thanks to the experience of the night before, crossing the mud streams was a walk in the woods, holding the wheel with one finger only. 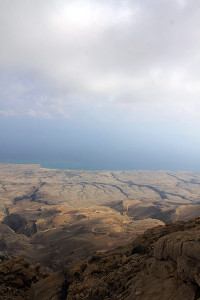 Then after 25km of an easy track to build the confidence of my two tourist drivers, we entered the mountains at Wadi Dayqah Dam, some 70km past Muscat. I had carefully researched on Google Earth an itinerary linking several tracks that don’t show on any maps to go all the way to Sur. However the terrain made us change our plans. The rain of the previous day (that continued sporadically) had transformed the track in a mud field. The soil was heavy and spongy. As there were the tracks of two vehicles, we decided to continue anyway as far as the tracks were going. No error was permitted as parts of the track were washed away in some places, and the space available between the cliff and the ravine was just wide enough for the car. With the tyres secured on the rock, it is already stressful enough, but floating in the mud, it calls for all your driving science. 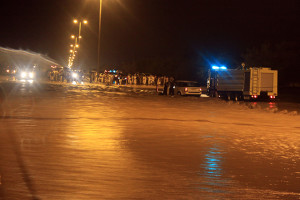 Arriving in a small village, flooded wadis were blocking all the tracks exiting the village and we had to backtrack for few kilometres before existing to the seaside. It was really impressive: all the wadis existing in the mountain range were offloading brown streams visible few kilometres into the turquoise sea. Our plans to visit Wadi Shab had to be postponed as it was also transformed in a brown stream carrying palm trees and other stuff. We arrived at the new hotel nearby under the heaviest rain I have experienced in the region.

On the third day, we gave a try to Salmah Plateau and got on top from the south entrance (if you haven’t tried it yet, you should: how to climb from zero to 1,000m in five hairpin bends). Some parts were pretty rock ‘n roll, the mud had dried, but the rain had washed away the soil and only the underbed of rough rock was apparent. The village 10km away, when you take on the left in the first settlement, was not reachable, or at least we didn’t feel compelled to try as there was no vehicle tracks going ahead when we reached a point on the “road” that looked really rock ‘n roll. Reaching Qurran, we were told that none of the two tracks leaving were drivable. We decided to trust the villagers, even though they may have just been trying to trick some tourists not to enter their village. They were not especially welcoming.

Since it was not possible to cross the mountains, we backtracked to the sea. I hadn’t been to Salmah Plateau for a few years, and the construction that has been going on there is crazy, pretty buzzy for the middle of nowhere. Then we hit the road to Nizwa via Sur. It was uneventful, and the occasion to see that the rain had not spared a single square centimetre of the country. Roads were full of sand and other sediments brought by flowing water.

We stayed in Mirfah, an old oasis 40km of Nizwa, just above Hamra. I would consider only camping in Oman as a consequence of the poor value for money of accommodations on offer. However, as my two guests were totaling 130 years and were on holidays, we decided to spend the nights in hotels. This is the only place I would recommend to you. It is the closest experience of Old Oman that you can offer to your visiting guests. You have to park at the entrance of the village and walk 10 minutes down (and back in time) through one of the best-preserved oasis and dried mud village through narrow alleys, unevenly cobble-paved. In my world, 250 AED per person to sleep on a mattress on the floor and eat chicken and rice is still bloody expensive, but so far the best value for money I found in Oman, and it is a pleasure to wake up surrounded by banana trees, breathing pure 1,000m-high air. It used to be the house of the grandfather of the owner (an English teacher in Hamra), and he decided that it was the best way to keep the oasis alive. You can find it on booking.com when looking for hotels around Nizwa (Mirfah old house).

However, don’t think of bringing your old auntie in her wheelchair. How big were these Omani guys 200 years ago to build stair steps 50cm high? On the fourth and last day, we drove to the highest drivable point on Jabal Shams (2,003m), not after I had to walk again down to the hotel to get the map that my two tourists had forgotten (and that is the only thing they had to think of that morning, beside taking pictures).

The drive in the wadi in the canyon was not possible. We were told by a lady in red in the first village that the track had once again been washed away. Jabal Shams tracks were less damaged than what we have experienced in other parts of the region. It was my first time up there and the view down the canyon is really impressive. I am looking forward to coming back to climb the 3,000m summit. Then we hit the road back to Dubai and as for all Oman trips, we stopped for dinner and shisha at Bab Al Shams.

Conclusion:
Water crossing and mud driving like I had never experienced (and enjoyed!) before in the region. It beats the three days of rain we got in Dubai in January 2007 where cars where floating in 3m of water under the bridges on SZR. A welcome change from the usual sand and rocks.

However, difficult to plan and we had to stay on black-top roads far more than we would have liked to. Please, please, we will never say it enough – be extremely careful and get out of wadis when there are too many clouds. Even with a clear sky above you, it can rain 20km away and it creates a water or mud wave that will go through the wadi and wipe everything on its way. It took me eight years living in Dubai to see a wadi full of mud going at racehorse speed. You understand how this big boulders end up in the middle of a wadi, and believe me, you don’t want to be stuck in there. Your flooded engine will be the last of your worries.

And one last note: the non-residents used to pay a 100 AED visa fee when entering Oman. Now, when they have landed in Dubai airport, they are exempted from this fee, while us, residents, still have to pay 50 AED. How unfair.
Get out there! Winter is too short to spend weekends at home!

Patrice (and Marcel, of course)