The Oman Quad, A Circumnavigation of Oman – Conclusion

After reaching the next sabkha, helped by the early morning dew, we turned back to Qitbit in a roundabout way, en route we fell upon another green and fertile oasis [N19.13975° E54.20783°] and also happened upon a group of 10 4WDs driven by Omanis in what seems to be the middle of nowhere, they had gathered there and corralled their vehicles into what may have been a circle for celebration and seemed to be having a great time of it.

We tried our luck with the checkpoint, which was laid on the sand-track that would take us directly to OE51, and as we explained our situation, they reacted positively to our planned route but politely told us for our own safety, since some tourists were “lost” a while back, the policy is to not allow anyone through without an Omani guide. “By the way”, the younger policeman said, “I saw you yesterday at the Oasis, yes?”It turned out that he was the driver of the patrol car, the day before.

Further route changes were called for and our new path would take us ‘OP’ again across gravely sandy sabkha, passing some interesting geological features, including geodes, which are round ball shape formations which held a lining of crystal on the inside, and on to the track heading towards the lost city of Ubar which is also the start of the YOS route in Mike’s book.

During this leg we gained a third puncture from the dried, spiky and tough vegetation that hung on to life in these remote desert areas. Even so, we celebrated our fifth night under the stars with a warm camp shower in the late afternoon sun, and the luxury of a double chocolate TimTam biscuit, in an area of pillow rocks and large trees.

Explore the some Hidden Falls of Oman 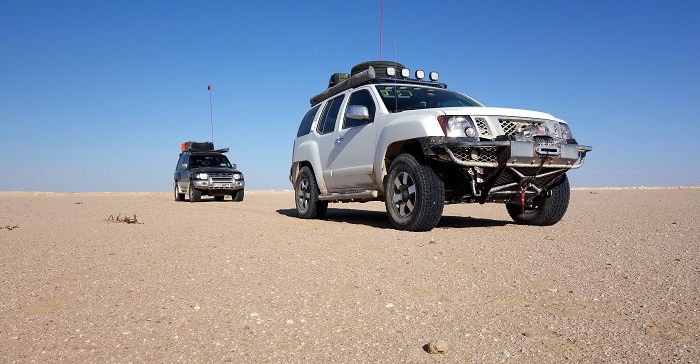 Arriving at Ubar around midday, it is a hive of activity. We saw several municipality workers in their bright orange overalls busy at work, and it seemed that the place is being given a facelift. We refilled and refuelled and then set off down the YOS route towards the confluence of the Yemen-Oman border.

We planned not to venture farther than YOS13 given the disputed border lines and after going OP, tearing along kilometre after kilometre of hard sand and gravel sabkha many kilometres wide, surrounded by huge versions of the starfish dunes at the start of our journey, we popped out between the dune’s fingers at YOS13 and head south towards the Omani border town of Mazyouna along unused red flowing sand tracks.

Just before YOS13 we had come across a solitary Nissan Patrol with five Omani men trying to get it unstuck with no tools or recovery equipment to hand, just their bodies with which to push and shove and free the vehicle. They managed to do it just as we arrived on the scene, then out of the blue there appears an Omani farmer in his Land Cruiser pickup with crazy hair and frightening teeth, and a questioning gesture. He was probably asking why, why are you here? I doubt the sight of three foreigners and one a woman, so near to his home and the Yemeni border is that regular an occurrence for him. And just as quickly as he had appeared, he disappears.

The corrugations on the tracks to Mazyouna were some of the hardest that we have encountered and they took their toll on our vehicles. Our steel roof rack mountings began to literally crack under the weight of their load and not before long, the grinding sound of bare metal on metal is heard from inside the car. As this happened, we hoped that the remaining mountings were resilient enough to hold the rack until we arrived in Salalah, where we would be able to have them repaired.

We passed an abandoned bus a few metres off the track, that had become bogged down in the sand and since that day it had been left there at the mercy of the elements. Mazyouna itself felt like a forgotten frontier town from the old Wild West days. Peoples’ eyes followed us as we move around. The heavily protected border crossing into Yemen can be seen only a few hundred metres away, it was a place to refuel and refill and be swiftly on our way. 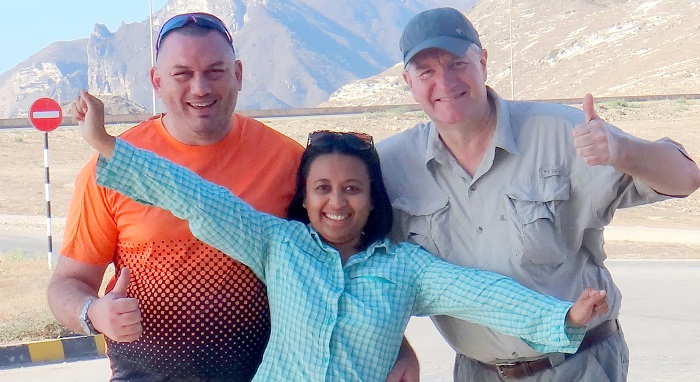 The tracks through Wadi Aydam towards the coast are heavily corrugated and physically punishing to both man and machine but provided us with the most beautiful scenery. The white sand, white river stones, abundant green trees and bushes grew full for the camels to indulge themselves, and steep almost vertical Wadi sides have been carved by the elements into the most interesting and unusual patterns. This stayed with us for many a weaving kilometre until finally we popped out on to the tarmac of the Salalah road.

Our ninth night under the stars was spent on the beach near the village of Fizayah [N16.82599° E53.70206°] with the sound of the waves crashing a few metres away and a cool sea breeze, that blew away the stresses of the hot and dusty days behind us. This was the night that the shooting stars gave all three of us the chance of seeing the single best sighting of the trip.

In contrast to the last nine days, Salalah beautiful at any time of the year. It was like a pearl in the oyster to us. After overnight camping, dusty tracks and wind-blown sandy plains, we relished the chance for a hot shower and air conditioning, and took the opportunity to wash clothes and to pamper ourselves over the next two days with some good food and the much anticipated ice cold in Salalah drinks, which had become a milestone target for us.

With roof rack repairs sorted, vehicle and drivers washed and refreshed we set off on the return leg north up the coast road. This took us through the final section of the remarkable feat of engineering that was the recently opened road across the mouth of several high wadis, in the way that the Omanis do so well and which linked Hasik to Shuwaymiah for the first time.

Time was pressing and covering distance was the name of the game, and after the monotony but quietness of the tarmac surface, another overnight camp by the beach this night at Lakby, was interrupted by the visit of some locals who were interested in who we were and where we had come from.

More kilometres of tarmac, but by 3:00 p.m. we entered the Wahiba sands where the local farmers have created a small village of shacks and sheds built out of what appears to us to have been things blown ashore by the winds coming off the coastline only a few metres away. 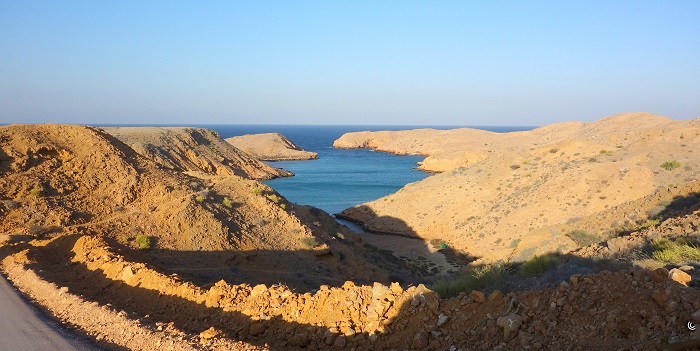 30kms into the Wahiba track we are stopped by a 4WD full of Omanis, one of whom jumps out and very agitatedly demanded “water and chips”. I hand over some water but had no chips, despite his insistence. He quickly made his way to team VE’s vehicle with similar demands, but again he would be out of luck for chips.

Team VE sniffed out a campsite avoiding the chance of being disturbed by interested locals for a second time, and we settled down for another night under the stars.

Continuing our path through the Wahiba, we set a steady pace. The fact that the area looks so green only a few months after the summer means that the place would most likely be a veritable garden by the end of the winter months. That would be a great reason to repeat the Wahiba track. Our planned route of 135kms meant we surpassed the 1001 Nights camp. We then went into Al Mintrib for a refuel and refill, and it was now time to rejoin the coastal road, which we did by heading into Sur and following the Muscat road.

One more overnight camp remaining andwe planned to head for the As Sifah/Yiti area, a track through a dry wadi was used and we arrived at Yiti in the late afternoon, and found a small enclosed beach at the bottom of a steep slope which was ideal for the last night camp.

The final day and the drive from Yiti on the weaving coastline is beautiful, a popular area for local and overseas visitors alike, where the As Sifah beaches are being developed as a tourist paradise. We hoped that the next time we visit, the area will not have been developed beyond reason. And with a sense of disappointment that our drive was coming to an end, in a similar way, we also hoped that the drive we had completed would not be changed beyond reason. So that others can experience what we have, to succeed in their own small way and to be able to just get out there into real nature and see for themselves what “The Real Oman” has to offer.

Big thanks to Mike Nott for his initiative, Lawrence and Elisna Vincent-Edwards for their team work, navigation assistance and their undaunting enthusiasm, Martin Wennerby and Anthony Bolton for the loan of equipment, Ian Huggins, Norman MacKenzie and Cheryl Lyou for offering backup support. Clive’s trusty old Pajero is serviced, maintained and modified by Bejoy at Auto Dynamics, SHJ.