Mount Sana 60 is the last ultra of the season for Urban Ultra, and it does not disappoint. The 60km is essentially an obstacle course, but with 10km of solid running between each obstacle. The crowd is the usual suspect gang of our running cronies, with a few unsuspecting people unwilling to go big so Urban Ultra gives them the opportunity to turn off at CP1 avoiding the ‘fun stuff’ and do a 21km loop. The challenge of the day isn’t the distance: it’s covering the distance with the obstacles within the time cut-offs. 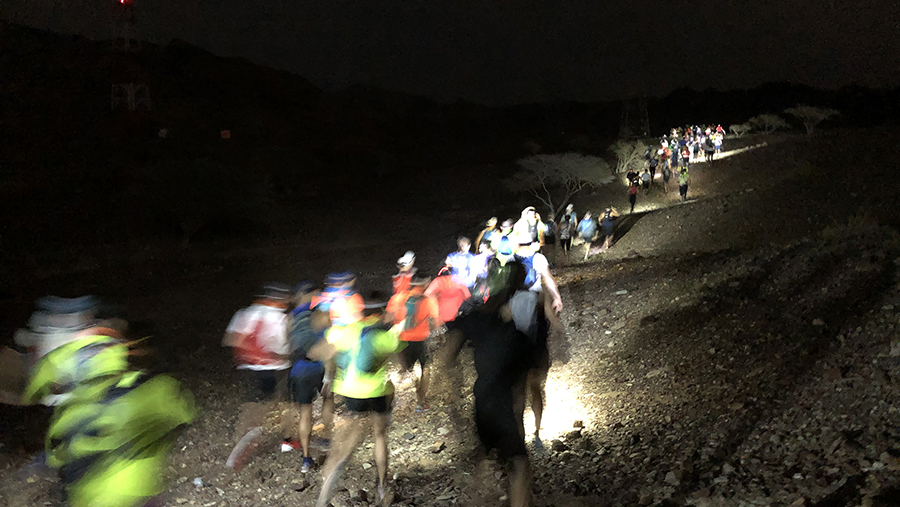 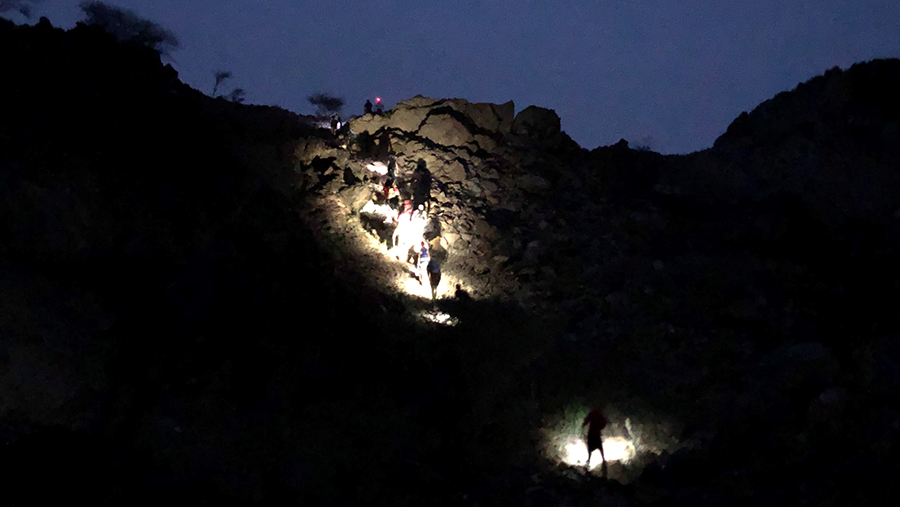 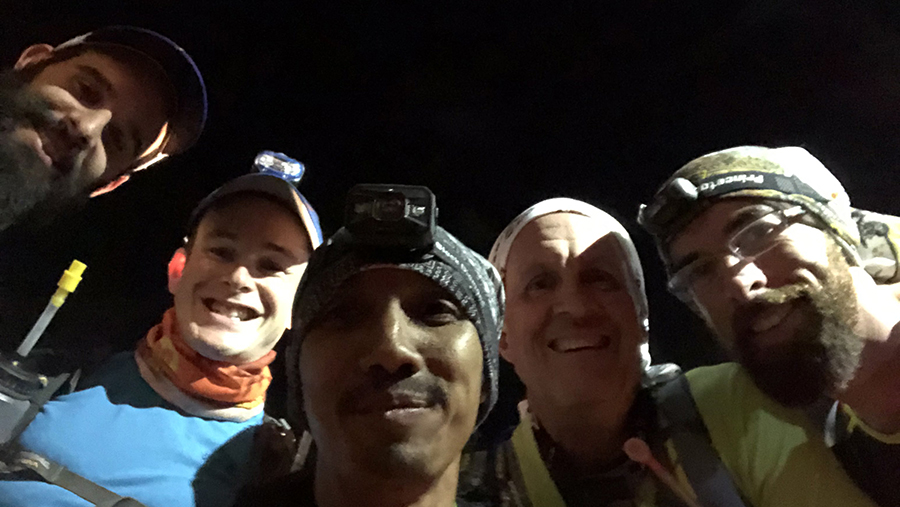 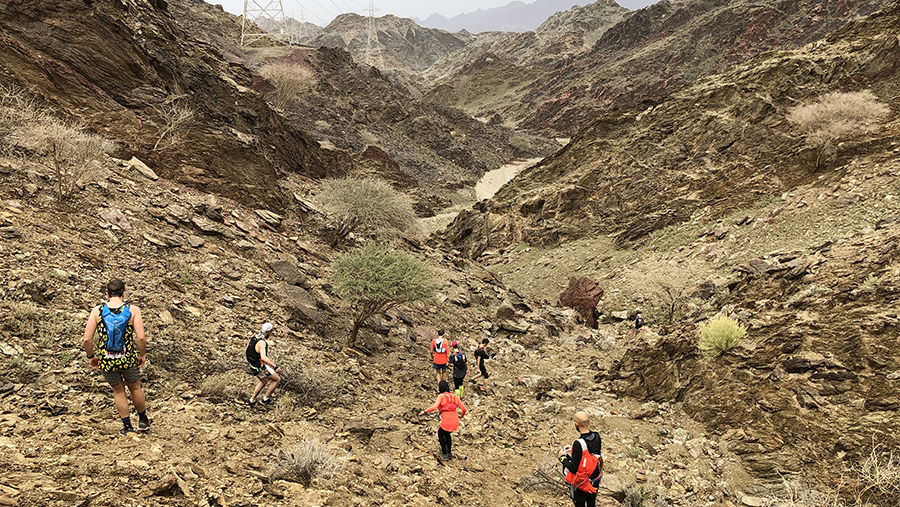 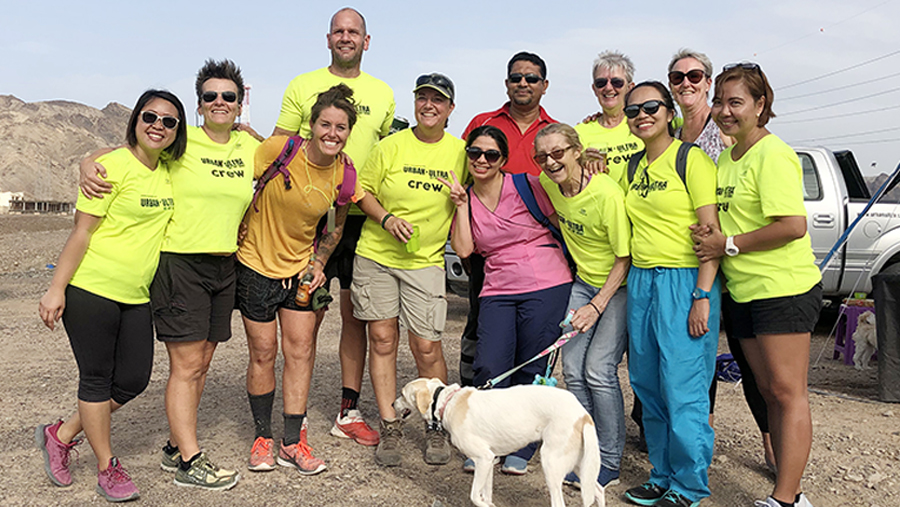 Goat Pack
Unfortunately, David T is out ill for Mount Sana 60, but Stewart manages to fit us in his busy cycling schedule to join me and Pornsak. There is a big contingent from Bahrain, to include Andy of Oman by UTMB fame and his buddy Pierre. One of my buddies who ran a lot last year, Ramzi, decides to run after losing a bet. I manage to talk a new guy, Niall, into giving it a shot, even though I neglect to mention the course, obstacles or challenges. One of the guys I ran some with at Hajar, Moustapha, is there. Jeremy and Heidi are running. Overall, there is a great crowd of runners, almost trail runners and soon-to-be-runners.

The Start
The start is somewhere in rural Fujairah, so most runners camp out the night before with only a few random people showing up at 04:00 for the race briefing. Camping out is always a fun way of getting out of our concrete jungles and enjoying the open air of the mountains. My preferred method is called ‘ghetto camping’ as I don’t have a tent and like to sleep on the ground – great plan until Louise and Pascale start showing me photos of the scorpions crawling all over the place. I sleep in my open topless Jeep, which is another great plan until it starts raining at 02:30. The rain lets up until the race briefing, when there is a classic deluge which is a great way to welcome all the runners to Mount Sana.

The Course
We start running in the darkness to a wadi and as expected do some rock climbing at 4km, which requires three points of contact. There is really something special about climbing wet, slippery rocks in the darkness, probably because you cannot really see the abyss to your right. The rocky trail goes up and down a nice hill, with some wadi hopping in the middle to spice things up. All the rocks are treacherously slippery, so Ramzi and I are joined by Heidi and we meander through safely until Peter pops up and reminds us that CP1 has a cut-off. We take off and blast through CP1, but somehow Heidi makes a wrong turn on a very well-marked trail and compounds her issues by not turning around and finding the markers. She ends up having to make the DNF call, only to find out she was an amazing 3km off the trail.

Rocks and Rain
After running the wet rocks, we have a solid 10km to recover before the next obstacles. Fortunately, Urban Ultra manages to keep things interesting with a solid dose of rain that scares the camels as we continuously run uphill. You’re an optimist if you think after scrambling so much that the uphills lead to runnable downhills, as the trails are too steep and have been washed out. After CP3 (+/- 32km), the beauty of Mount Sana appears in the form of a steep boulder field. Imagine climbing boulders bigger than most cars and jumping between them up an inclined wadi, with precariously situated rocks in heavy rain. That’s a great feeling which outweighs the frustration of making some poor decisions in the fog of an ultra. Unfortunately, a decent sized group of us gets tagged out at the CP4 cut-off – I won’t name any names, but don’t ask Ramzi, Niall or Stewart. Those who get through CP4 go on for some really strong finishes: Pornsak runs two hours faster than 2018, and Jeremy is three hours faster than 2018. Well done, boys!

The Secret of Finishing First at Mount Sana
Pierre Plumejeau finishes first overall and yet trains in Bahrain, where there aren’t any mountains or even real rocks to run on, so I ask him what the secret is in his first place finish. Pierre says: “I’m French. Unless I have to use my hands to climb, I run. I run up the boulders. I run down the scrambled rocks.” Ugh. Such a simple strategy, but I think he is reasonably fit as well. I think the secret is just getting really fit.

Summer Training
There is a limited number of big running events over the summer in the UAE. After the Wadi Racer in April, Mark Buley is hosting another Backyard Ultra in June. Lee Harris continues to train DTR’s at Wadi Showka on Friday’s and at Fossil Rock on Saturday’s. Urban Ultra offers trail running camps in June and July in France before opening the fall season with Night Rebel in September, followed by UTX50 and Kalba Kickr. Find your training spot. Prepare for your goal race. Don’t overestimate your abilities. Don’t underestimate the heat. Find some running buddies and get fit for the fall season! ■