Twelve of the UAE’s most fearless desert dune buggy drivers descended on Sharjah’s exciting new destination megaproject, Aljada, this weekend for a chance of victory at the first-ever edition of Red Bull Torque. 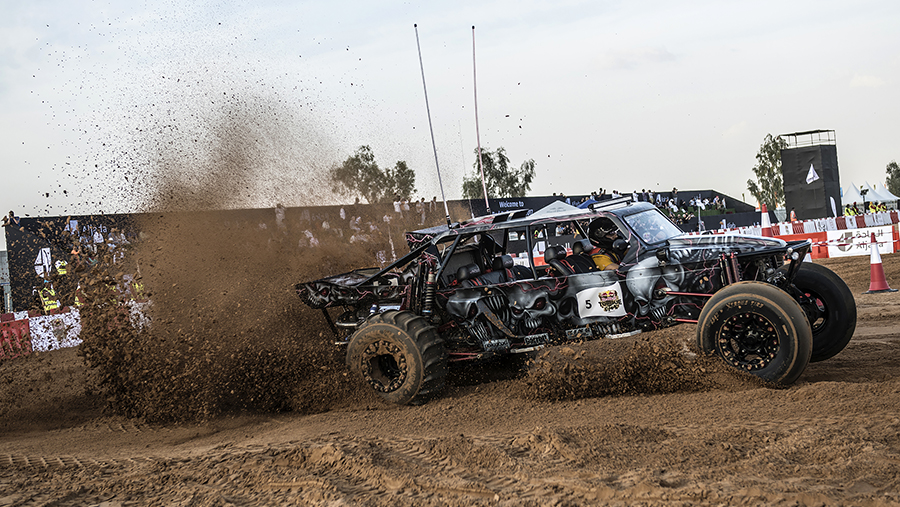 And it was Rashed Mohammad Al Dhaheri who emerged victorious on the day, bagging first place with the fastest lap of 01:38.370.

Second place Seif Mohammad Al Oteibah was very narrowly pipped to the top spot with the fastest lap of 01:38.820. That’s a difference of 450 milliseconds between the two finalists.
Meanwhile, Nasser Al Hai and Seif Saeed Al Dhaheri rounded up a third and fourth place, respectively. 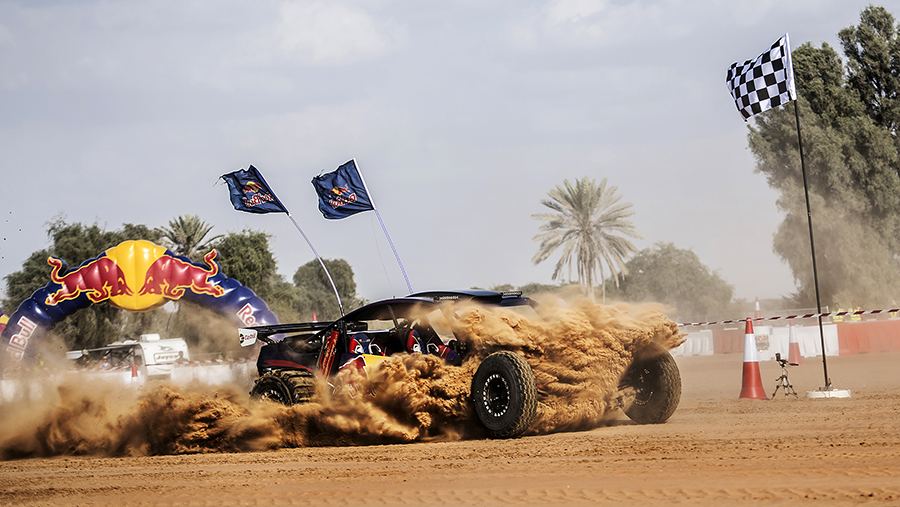 The competition – also the first of its kind to be hosted exclusively for purpose-built buggies in the Middle East – put contestants through their paces as they took on a challenging, 120-metre course. The aim of the game? To put their precision to the test, while making sure they’re the fastest in their heat.

It’s certainly no easy task, as these dune buggies are often seen in the desert driven by hobbyists. And while the drivers no doubt have phenomenal skills, Red Bull Torque’s course requires that they control their vehicle’s power in order not to touch barriers or obstacles, incurring penalties in the process. 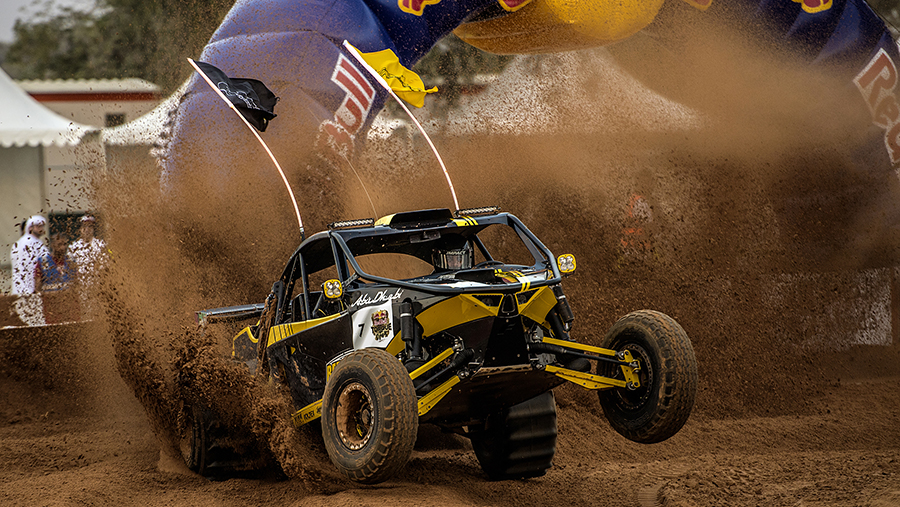 As it Happened
In this elimination-style race, the twelve contestants were drawn at random to go head-to-head as pairs. For every race, two buggies started from opposite sides of the track, with each driver aiming to cross the finish line with the fastest lap. Bonus points were awarded for skills and creativity, including wheelies performed, car design and that all-important engine sound.

During Heat 1, six races commenced at two laps each, with the eight fastest drivers qualifying to the next round.

This was followed by Heat 2, where the four best drivers were chosen to proceed to Heat 3. 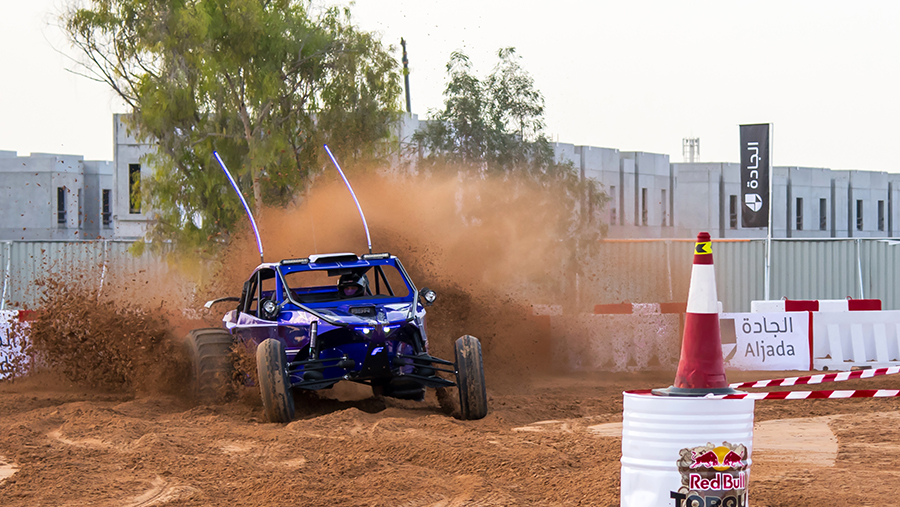 During Heat 3, the four semi-finalists battled it out for a position in the grand finale.

As for the entire competition, the fastest lap out of the total heats went to Nasser Al Hai, who completed the track during one heat in an impressive 01:06.570. 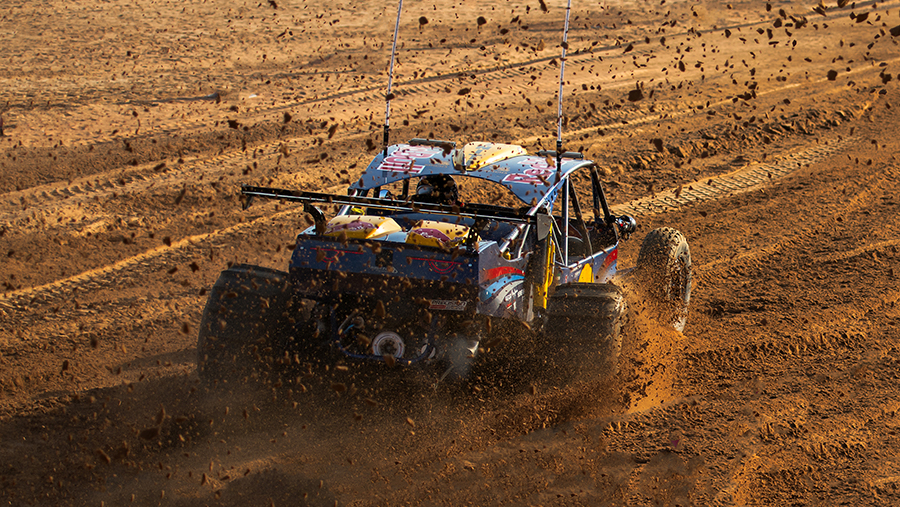 The Buggies
The talented contestants can’t take all the credit for what was an action-packed, thrilling weekend event. The dune buggies were also an attraction in themselves. These aren’t your average desert dune vehicles; in fact, some of these machines cost up to an eye-watering AED 2 million to build.

All Funco Motorsports (or similar to Funco) branded buggies, each twin-turbo or supercharge V8 vehicle has an average of 1,200 horsepower at the rear wheels. Engines fitted at the rear enable these buggies to have excellent weight distribution, making them glide effortlessly on the sand.

Every driver is free to modify theirs as they wish. And this is where it can get competitive, what with being given free rein with horsepower and torque. But at the end of the day, only the most gifted drivers will be able to handle all that power.

Red Bull Torque took place at Aljada, Sharjah’s largest and most exciting new megaproject. Launched in September, Aljada will be an all-encompassing city within a city, allowing residents, workers and visitors the chance to live, work and play all in the same location. But before the villas, apartments, sporting and entertainment facilities are completed, Red Bull got to make use of the available space for this special event.

Created by the UAE’s newest developer, ARADA, Aljada will also be home to the Central Hub, which will be a new leisure and entertainment district for outdoor, indoor and extreme sports in the country.

HE Sheikh Sultan bin Ahmed Al Qasimi, Chairman of ARADA, commented: “We are delighted to partner with Red Bull to bring this first of its kind event to Sharjah. This partnership is in line with the project’s masterplan, which has put walkability and an active healthy lifestyle for all Aljada’s residents at its core.” ■