There are only a few people on earth that can claim the title as a “legend” in saltwater fishing or Sport Fishing in general. Those that landed the first big fish, which were previously unheard of, Pioneers such as Zane Gray, Ernest Hemingway, Michael Lerner are angling greats because they were some of the pioneers that pushed the boundaries of sport fishing earlier on. They turned to Thomas Gifford to skipper them, if you don’t know Capt. Gifford, you might be familiar with his contributions – The Outriggers, the star drag reel and Kite fishing, tools and methods used till this day. 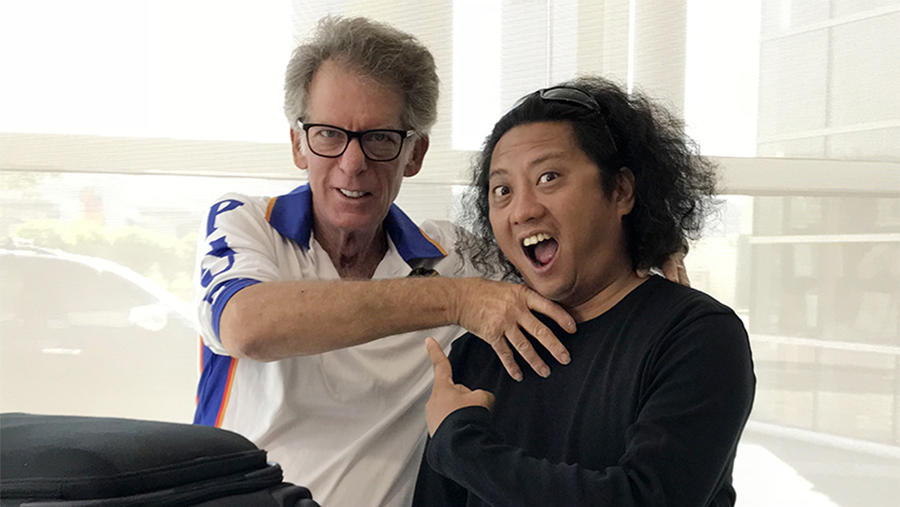 Finally meeting one of my mentors – dream come true!

Legends are people who changed the way others fish, Lefty Kreh, Flip Pallot, Stu Apt, Tred Barta, Marlin Parker, Bill Billson, Bart Miller and Jose Wejebe to name a few, are names that kids in the 90s from all over the world, watch on TV and read in magazines. They gave us inspiration and they made us want to be like them, we all have our favourites and be it any type of fishing you do, you have heard some of these names at one time or another. 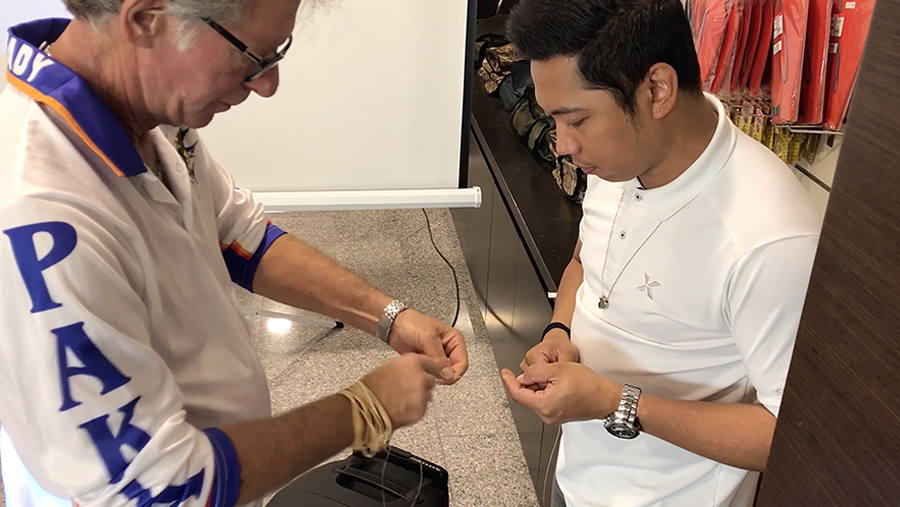 In recent history, one man single-handedly changed the way people fished for Marlin, he revolutionized the game by making knowledge of catching these monsters of the deep and giving it to the private boat owner. Before him, to catch marlin, you had to go to the charters or be really wealthy enough to be able to hire the crews of the charters to work on your boat. When Peter Pakula came around, that all changed. 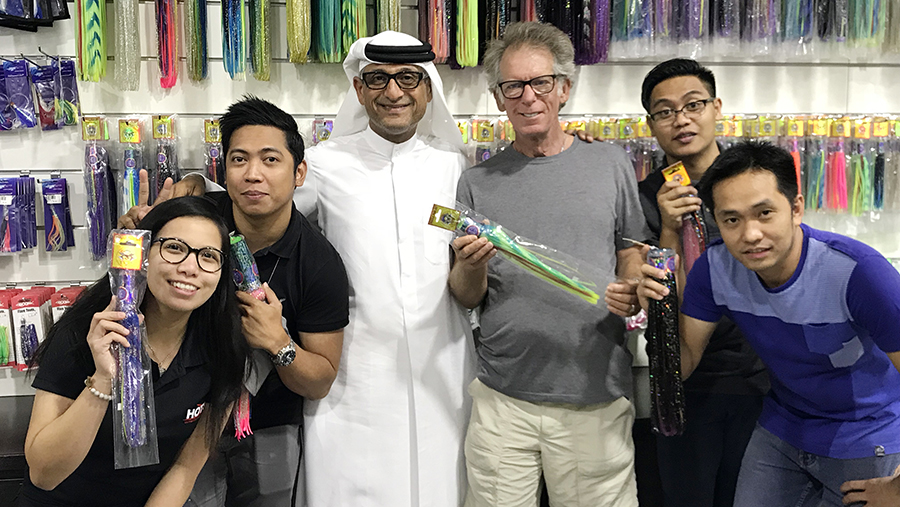 Peter with Abbas Hassani and staff

Peter is Unique in so many ways, his methods, which were considered radical at that time, are now heavily adapted the world over. Peter Pakula is a marlin lure designer and manufacturer; his shapes are originals and were often copied (they are still the most copied lure in the market today). He broke apart from the usual norm of slant heads, which were common at the time and created a line of lures that were easy to use for anglers the world over. Many did not accept his use of Ultra Violet additives to make the skirts glow in both lowlight and bright light conditions making them more visible to fish. Fast forward 30 or so years and you see each and every single manufacturer using UV and glow in the dark colours. A true innovator to the bone, Peter is not one to rest on his past successes, often changing colours to his lineup, even very established ones! 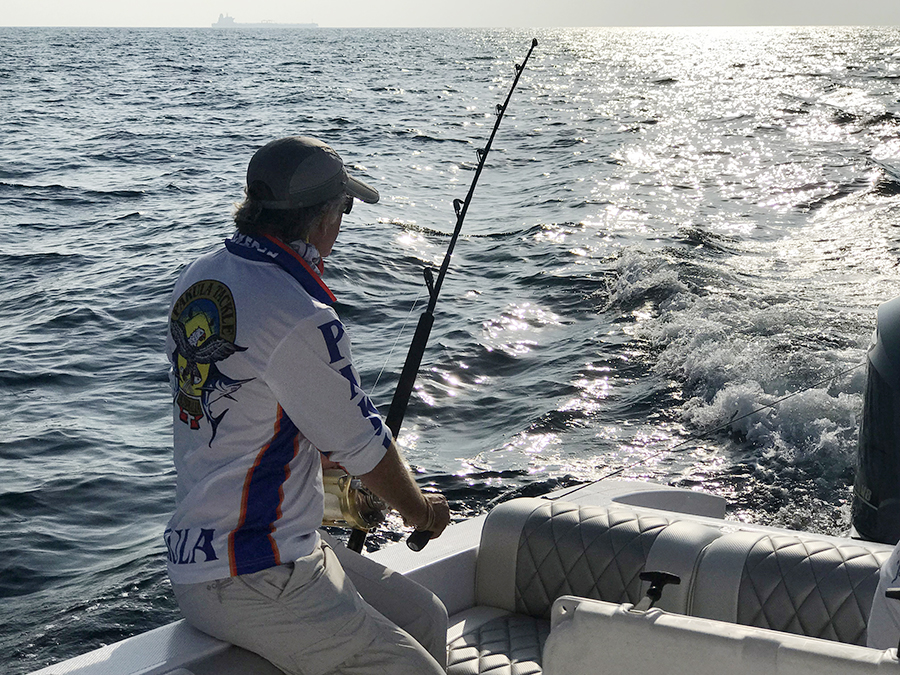 Showing me how it’s done

My first contact with one of Peter’s lures were sometime in the 1990s when two of my dad’s fishing buddies started using his lures, naturally, they gave me some to use and they have proven to be quite effective, a few years later I started corresponding with Peter and to my surprise, he answered. Since then, I have shamelessly asked him for answers to questions no one else could answer, in 2002, he sent me a copy of his Behind the Lines CD. I watched that CD set and still refer to his website to constantly gain knowledge and apply them to ANY of my fishing. His system makes sense to me and more importantly it and me works. 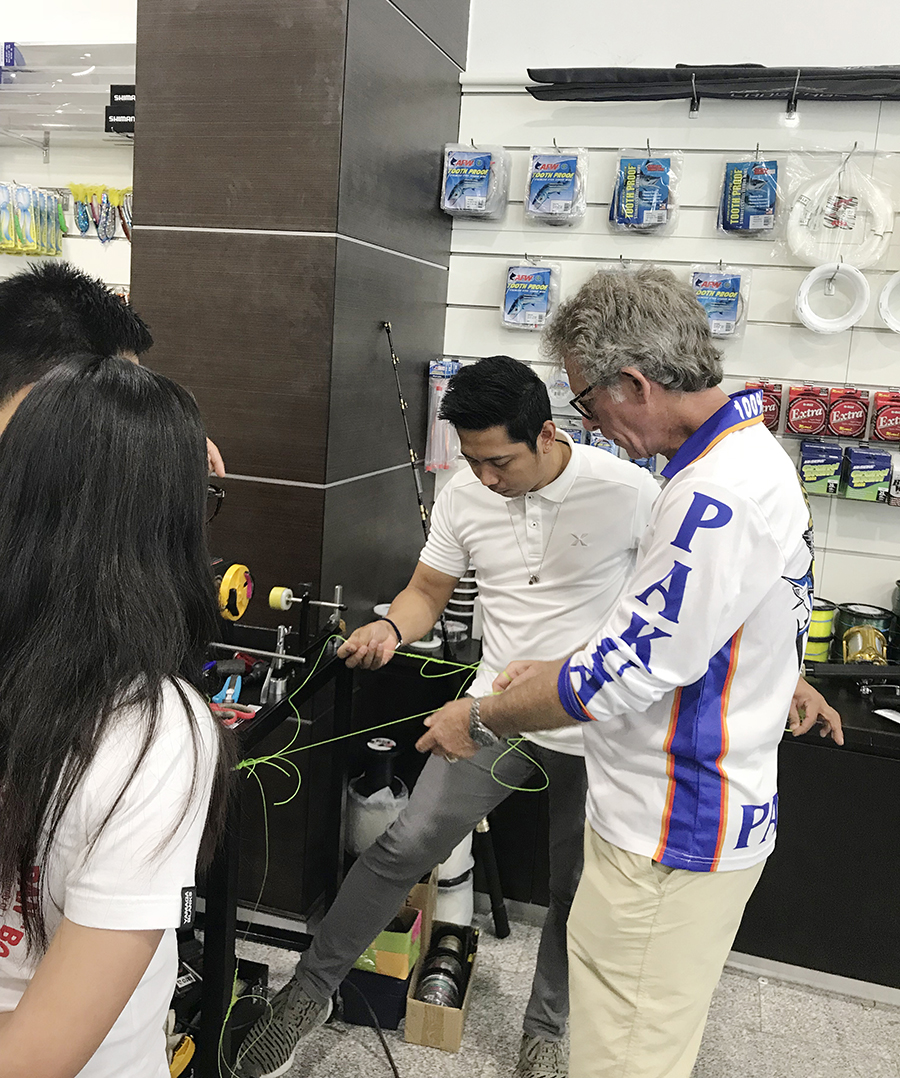 After a friend secured the dealership to sell his lures in the UAE Peter was invited to come over and give a seminar and I jumped at the chance to finally meet one of my fishing heroes and one that I could certainly say mentored me over the years. Listening and participating in his lectures (as a prop!) is a huge highlight in my fishing career and continuing my education on board a boat with him has changed a lot of my perceptions to how big game fish such as marlin behave. The lectures were great and putting them into practice and seeing everything discussed happen in front of me was a dream come true. 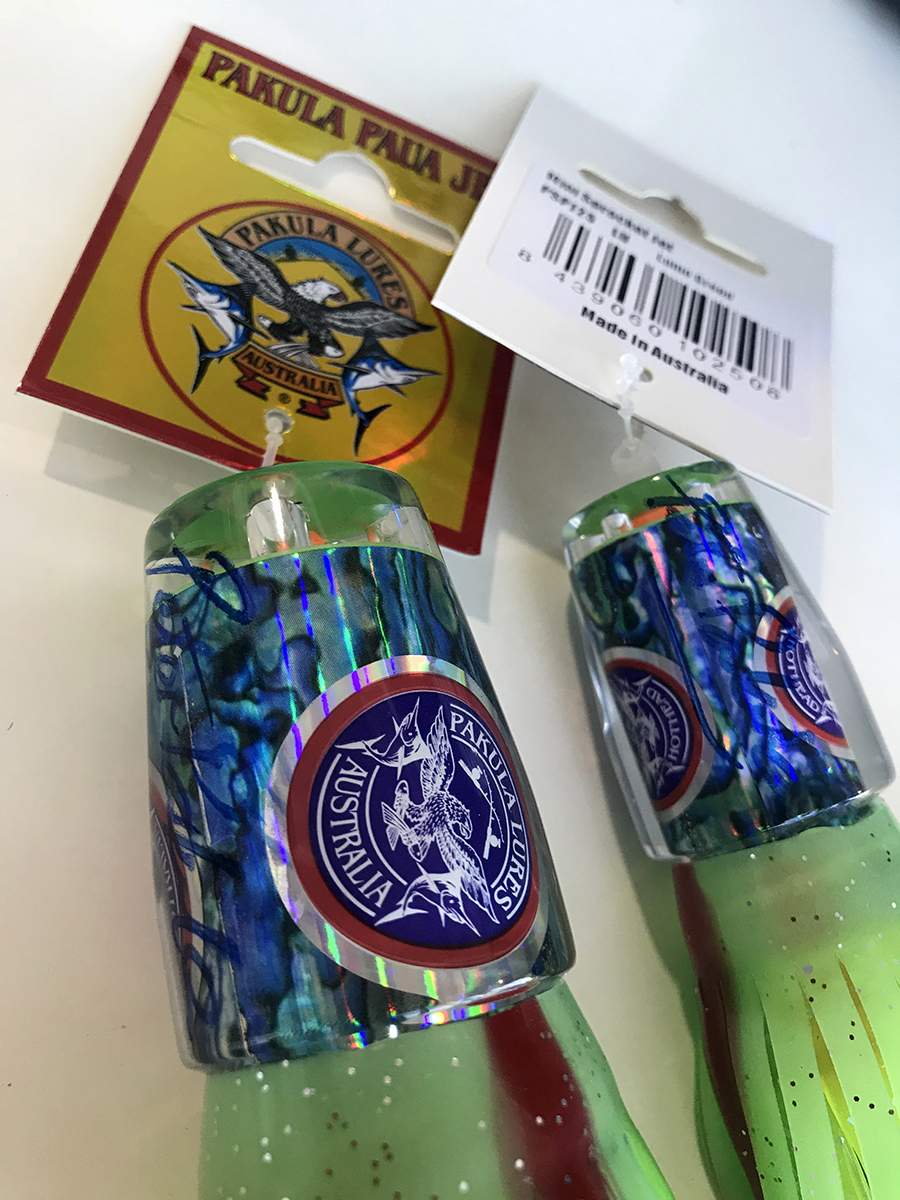 Early on the first day of the Fujairah Offshore Fishing Competition, a few minutes after setting everything up, we had a double hookup on two 600+ LB (300kg) Blue Marlin. They started jumping and crossed lines, one immediately broke and the other spooled the 50lb (24kg) reel in a matter of seconds. 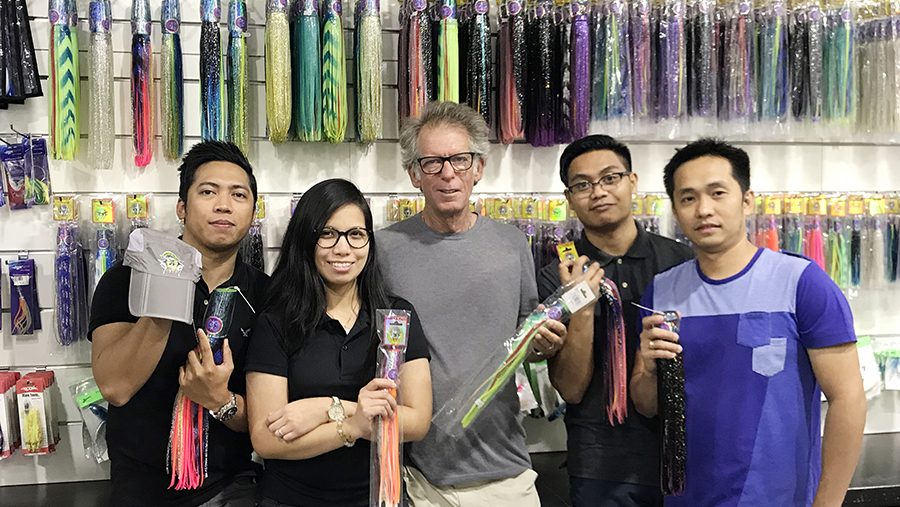 Although we didn’t catch those fish, for me it was already a success – it was the first time we went out marlin fishing and we hooked a double header. We learned how to use Peter’s system and we have agreed to dedicate one Friday each month to go after these monsters. Seeing how everything works as a single unit and getting tips from Peter himself from setting the lures and teasers correctly to rigging taglines and seeing each lure in each position catch fish was quite eye-opening. I learned a lot and I am looking forward to learning more in the years to come. 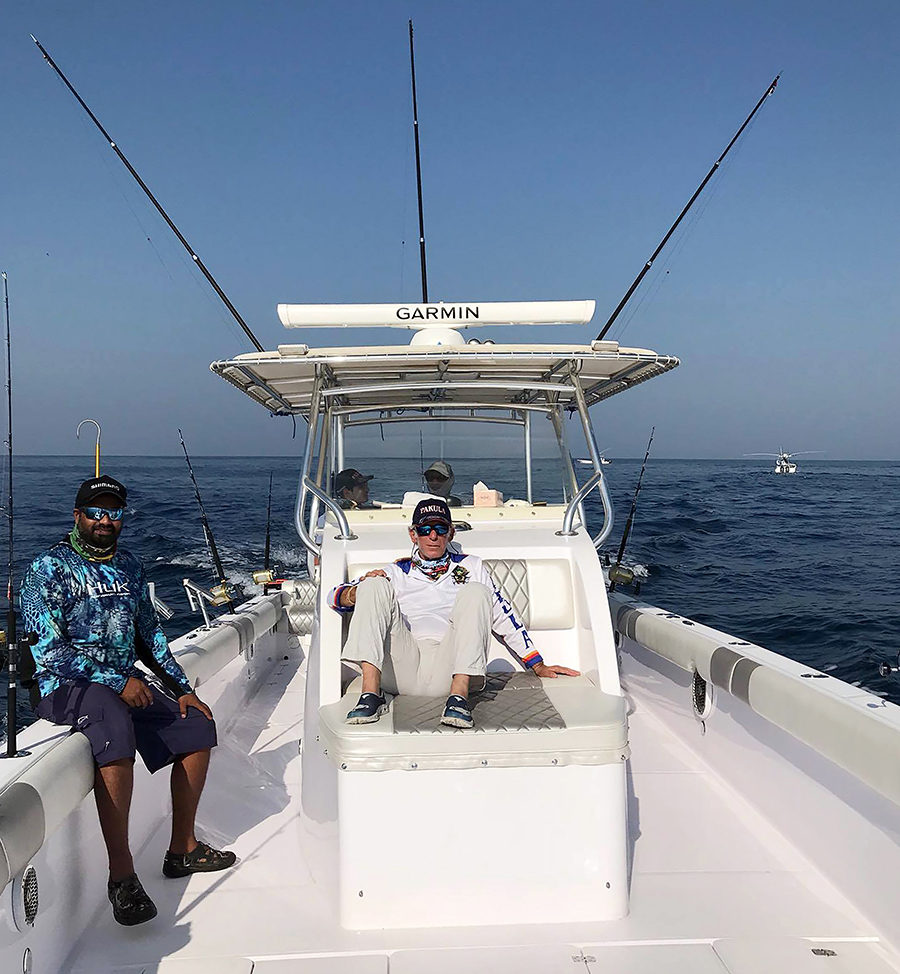 Peter Relaxing on board the Yasmin while waiting for a bite

I can’t thank Peter enough for visiting us in Dubai and for the knowledge he has imparted. I’m sure the guys that joined the lecture feel the same way.
It’s easy for anyone to call someone else a legend – Even easier for someone to want to be one. What is hard is for the whole world to acknowledge it; Peter Pakula has done that without wanting to be one.

To my teacher, mentor and friend – We shall meet again, and I will never stop bugging you with questions. ■