How to Keep your Gear Looking (and Working) like New

Buying new rods and reels is always a happy occasion for us anglers. We take them out of the box and treat them like babies. I even know  of a few people that keep them close to their bedside when they are first purchased, probably for them to wake up and know that they really have them and that last night’s unboxing was not just a dream.

The salinity level of the waters in the UAE is quite high, increasing the likelihood of salt affecting your gear. While the steps of cleaning your gear are quite simple, a lot of people often make the mistake of washing everything down with a hose. The pressure from the water exiting the hose actually does more harm than good in the long run. The stream of pressurised water pushes salt into the hard to reach places of both rods and reels. In reels, salt deposits will be in the corners beneath reel seats, between the bail roller on spinning reels, between the drag washers and many more places where you think water would not get pushed into. Rods suffer corrosion from the places where the guide foot meets the blank. Even the best made rods have gaps between the epoxy and the blank, where the salt deposits will seep in, and before you know it, you will start to see rust forming in those areas. 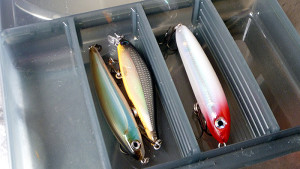 While there are a lot of people who pay close attention to their gear and clean it as they should, quite a lot more try and fail. This is the main reason why a lot of people have a growing collection of corroded rods, reels and lures. 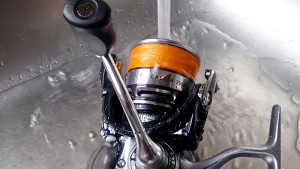 Don’t forget to wash your line – the line is what gets wet the most, next to the lure

Cleaning lures is a very simple matter. The easiest way I have found starts when you are out in the water. As a matter of practice, I usually have a separate compartment in the tackle box reserved for lures that I have used while in session. This separates them from the bulk of the lures that have not touched water or the ones that are brand new. When I get home from fishing, it would then be very easy for me to separate the lures I’ve used and rinse only those.

Rinsing lures is a very easy task, however it might be the one that gets ignored the most. In my case, I usually just put them in the kitchen sink and rinse each lure in warm running water. Lures are not subjected to the same pressures as a rod and reel and the parts that might rust are the hooks and split rings, which you should change from time to time anyway.

Before going into the rods and reels, I want to mention something that I have mentioned a lot before. With rods and reels, you really get what you pay for. The more expensive items have features that are not only made to make the reel run smoother or stronger, they are also more improved with seals and are usually protected from corrosion by having higher quality salt-resistant bearings and plating. Some cheap reels might just be anodized, while the more expensive reels have a type of anodising that is specifically developed to combat corrosion (like type 3 anodising). Higher priced reels such as the Shimano Twin Power and Stella, to name a couple, are “saltwater sealed”, which means they have seals in their bodies that protect the insides from saltwater intrusion. Both reels also have the special type of anodisation. Daiwa has taken reel sealing to another level with their MAGSEAL technology. Daiwa utilises magnetic oil that seals the areas of water intrusion – making their reels practically waterproof. This is done on top of their anodisation. The problem with these reels are the price tags they command. However, if you have reels such as these, they negate the problem of buying a cheap reel and having to replace it after a few months of use. 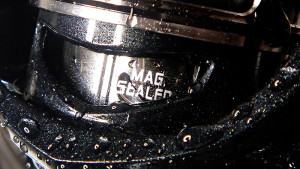 The reason why these reels are easy to maintain is because the makers have taken into account how most people wash their reels. Also, most Japanese domestic market reels are sealed differently than their US/EU counterparts. This is one of the main reasons why I choose to buy the Japanese models over their western counterparts; the Japanese models are just built better. But be warned, they are usually also more expensive. At times, the Japanese manufacturers build a mid-priced reel and throw in the waterproof feature – reels that come to mind are Shimano’s Exsence and Daiwa’s Caldia and the cheaper Freams. All three reels are sealed, the Exsence with some sort of super gasket and both the Caldia and Freams with the MAGSEAL.

Rinsing Reels
Before cleaning your reels, make sure you tighten the drags as much as you can before they get in contact with water. Doing this will prevent water from getting inside the drag housing and getting to your drag washers – salty water getting inside the housing and drying up will give you a bumpy drag. Unless you haven’t figured it out, you also need to take the reel off the rod. washing them together is not a good idea, even if your reel is sealed. 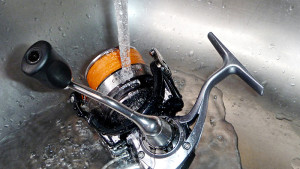 Some reels are easier to clean than others, this MAGSEAL reel from daiwa can take a washdown straight from the tap

For the top end models and mid end models that have seals, you can dunk them in a bucket of water or literally take them to the shower, run the reels in water, let them drip a bit, then spin the handle a few times before wiping them down with a soft cloth. You can then air dry them before loosening the drag and put them away for storage. It’s that simple and it’s part of the reason why these reels are expensive in the first place. 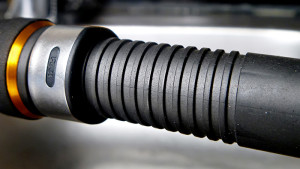 I can almost guarantee that if you do the same process above for reels such as Penn Battles, you will immediately feel a knock in the bearings after a few weeks. 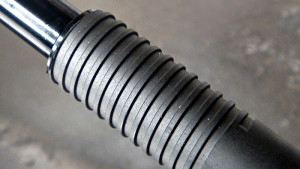 For other models that are not sealed, doing what I described above will break them, and this is exactly where a lot of people fail. Countless times, I have seen people washing their gear as soon as they get off the boat, and they rinse the reels by using a hose. They rinse their reels on the rod (this will push the salt into the threads and it will freeze the threads – commonly seen with trolling setups), and they are left wondering why they can’t take the reel off the rod after a while. 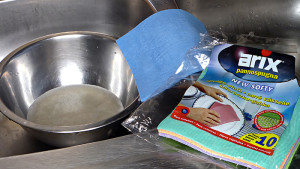 The best way to clean mid end reels is to use an absorbent foam pad (about 7 AED in Carrefour for a pack of 5) dunked in warm soapy water and wringed out. I usually wipe the reel down and rinse the foam pad in running water, wringing it out before dunking it again in the soapy water, then wringing it out and wiping it down thoroughly once more. I repeat the process about 3 times before wiping it with a soft dry cloth. Again, keep in mind that you need to tighten the drag before doing this.

The rods are wiped down with the exact same process, keeping in mind that you need to pay close attention to the guide feet. You also need to wipe the reel seats down move the threaded foot all the way up and all the way down to cover all of the threads. I have 10 year old rods that look new because of this, so this is a method I really stand behind. 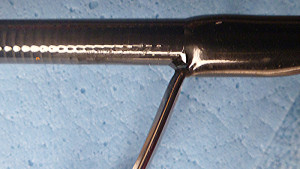 The main reason why I prefer this over a wash down is simple; your rods and reels only get subjected to salt spray when you use them, so you only have a film of micro particles you need to get rid of. These minute particles will deposit themselves in the tiniest crevices if you wash them with flowing water, but you can effectively take them off with a rag or in my case, the foam pads.

The last thing you need to make sure of is to check that everything is dry before you put them away; otherwise they will smell funky when you next take them out for a fish.

I made a video together with this article if you want to see how I do it. Just go to youtube and search for my name (Kit Belen) to find the channel and look for the video with the same title as this article.

I hope this helps you and your gear.