There are few constant things in fishing. In olden days it was as simple as throwing a baited hook in the water. These days there are a multitude of fishing styles and disciplines one can get lost in and there are constantly more specific methods for different types of fish being developed each day and further refined to be even more effective.

The evolution of fishing here in the UAE occurs as technology is being brought in by our hard working tackle shops and people are starting to adapt and learn new techniques that help improve their fishing.

One such innovation is Storm’s Gomoku Conceptrange. Storm, a brand under the “Rapala VMC umbrella” is one of the most progressive brands in the world. Japanese designers are constantly looking for ways to make catching fish easier and consumers are finding it easier to catch fish with their products every day. 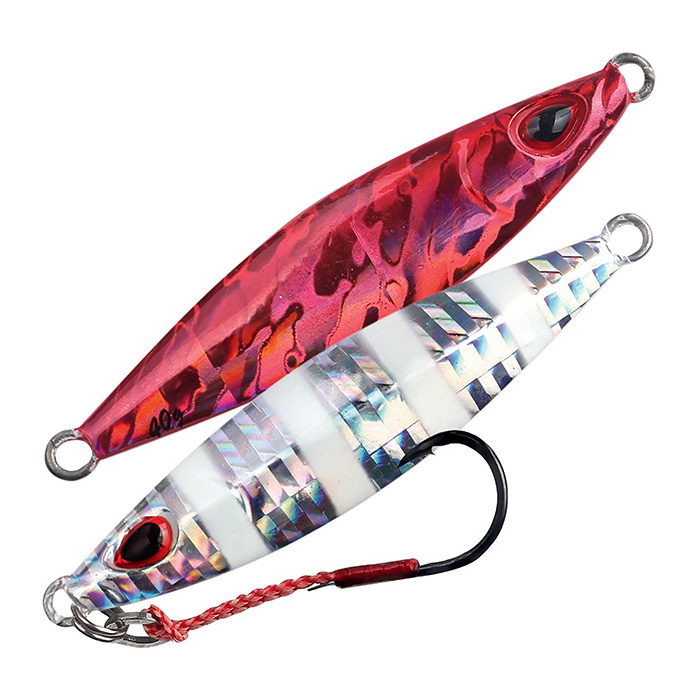 The Jig and a little bit of Insanity
A hallmark of a good lure is not how flashy it is or how expensive or how realistic they look, in my opinion, the best lures are the ones that catch the most fish in the most diverse conditions even in the hands of a not so experienced angler!

Without a shadow of a doubt, the Storm Gomoku,“Koika” is one of those lures. From shore fishing to dropping it down to almost 200 meters in Fujairah, this lure has produced for me when other proven lures have failed.

On a recent trip with Alghwas Fishing Charters, after dropping a fast jig several times just after sunrise, I went to the back of the boat and touched the water, finding it to be cold, I immediately looked at the only other outfit I brought with me that day – a Majorcraft Longfall rod paired with a Saltiga 15H and spooled with PE 0.8. To give you an idea on what the diameter of this fishing line is, it is probably about 8 to 10 strands of hair braided together. A few people would find this to be utter nonsense because, well to tell you honestly, it probably is!

I chose an 80g Koika for the job, I felt the smaller profile of the 80g jig would give me a better chance at a bite at a time when the fish were probably looking for a snack, more than a meal.

In colder temperatures, I’ve learned to scale everything down because the fish become lethargic and are most often more receptive to lighter lures.

With such a thin diameter line, the reel easily held 500 meters of line and although I was taking a huge gamble, from past experience with thin lines, I also knew that with the proper rod and the right drag setting, you might just be able to yank out a structure dwelling fish off a wreck or any type of structure. 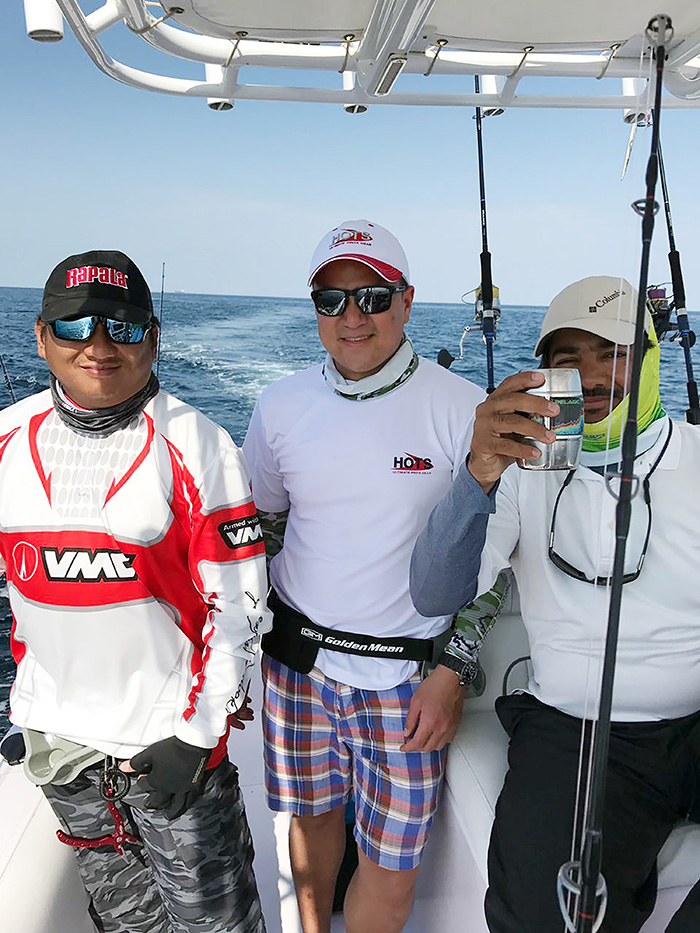 My Leader
Although not available on the shelves as I’m writing this, The Suffix Invisiline is worth mentioning because of the simple fact that it has very little or no memory at all (Fluorocarbon lines often retain kinks when you spool them on your reel or when you tie a knot with it).

For the line I was using and thinking of the conditions at hand, I chose to go with a 25lb/12kg leader and just to ensure the Koika got to the bottom, I made the leader as short as I dared. 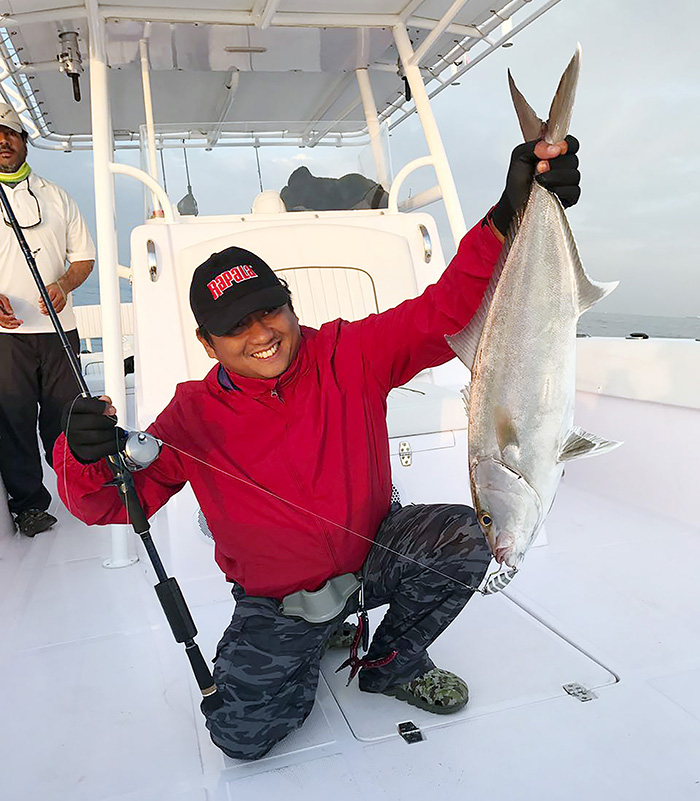 Long Fall Jigging
As a few of you know, Long Fall jigging is a form that has been around for a very long time – the only thing different is that nowadays, they have a dedicated long fall rod. Unlike slow jigging, on long fall, you pretty much only lift your rod and allow your jig to flutter down, as soon as you hit bottom, you just lift your rod, to the highest point (12 o’clock position) and let the jig flutter down.

For this type of jigging, I wanted the longest possible rod and this search lead me to the Majorcraft Long Fall Model rods. The first one I bought was the heaviest with a maximum jig weight of 210g. I wanted to go even lighter, so I went with the lightest model – GKJ-B78/3LF. This rod is rated for jigs from 60-150g. I posted the model number because I wanted you to see the B78 in the model number – the B means “baitcast” and the 78 means 7 foot 8 inches, this means this rod is 233.68cm this is an unusually long rod for jigging. So before you run to Barracuda and get yourself one of these, first and foremost, you have to realize that this rod will only give you one advantage – the length of the rod gives you the longest fall compared to shorter rods – after that, it all goes down hill…. fast. You have to set your drag correctly and ensure that you have the length of the rod always in your mind – a longer rod will make you feel as if you are getting yanked off the floor of the boat, so you always have to be conscious on where you’re standing and when the fish runs, be very prepared to stand your ground – more importantly, if you go with what I did and use PE 0.8, make sure you are ready to lose your jig, your rod (breaking it) and the fish…all the time. If you are not prepared for all of what I mentioned above, you might just want to stick to a slightly heavier line. The truth of the matter with really thin lines is that you will almost always lose!

It’s Go Time!
Right when the jig hit the bottom, I went through the motions and on my second lift, I felt a tug, I set the hook and found something heavy pull back, with the length of the rod in mind, I immediately started working, pulling as much as I could and relentlessly putting pressure on the fish as much as my line can give. At such a thin diameter and strength, I had to squeeze as much as I could to get the fish as far away from whatever piece of structure it was living in. A few more runs and a hurting shoulder later, I got the fish to the surface – to everyone’s surprise and amazement, it was an amberjack! And although this fish was not big (for sure not more than 6 kilos) the fact that I was able to pull it off the structure on such thin line was quite a feat and it was equally satisfying to release the fish after a few quick photographs. Amberjacks can grow up to 50 Kilos and it would be such a shame to take a small one especially when you know how big they get.

On my second drop, I hooked up again and brought up a very nice Malabar Trevally, which as the guys that have caught them will attest, is a fish that you can hardly call a pushover.

There were bigger fish landed that day, but everyone on the boat agreed that those two fish I caught were probably the highlights of the trip, especially the Amberjack! 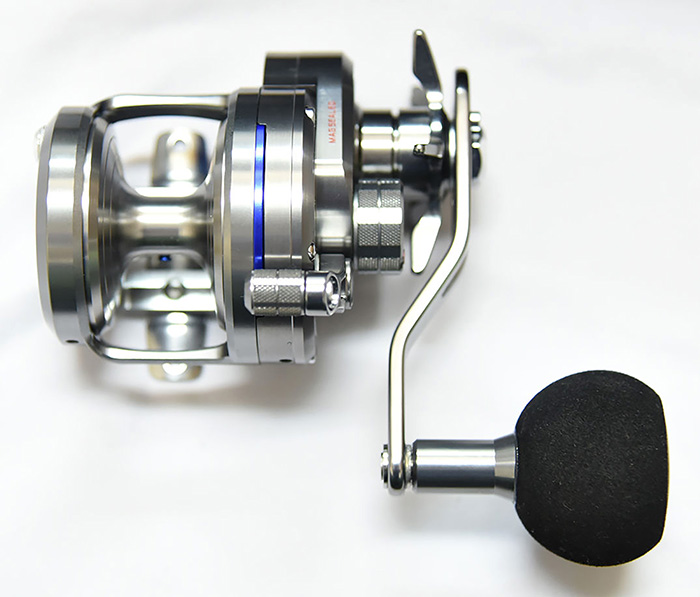 Trying New Things
Now, more than ever, there are a lot of fishing gear methods being imported from all over the world into the UAE. It is the best time to experiment and learn new things. When I arrived in 2006 there were only a handful of people jigging in the UAE, now, it’s commonplace. Fishing evolves, and as anglers have to keep an open mind and try new things that might work for us. I know there are costs involved and that it takes a lot of time and patience to learn something new, however, as I mentioned above, there are a lot of options now, more than we had in the early part of this last decade. There are now Gomoku rods which are proven in Asia to catch big fish, the suggested retail prices of these rods are under 500AED, together with lures that work really well, like the Storm Gomoku Koika, you can put together a system that will not break the bank and will catch you fish, all that’s left is for you to get out there and fish!